It has taken a while, but this weekend RTW parkrun managed to reach the milestone of 300 events! Since April 2014, 8,367 people have copmleted the course, and altogether they have managed to finish 55,857 times! Wow, that's a lot of running, walking and jogging. Over the last 300 events, those runners, walkers and joggers have been assisted by a fantastic 554 volunteers. 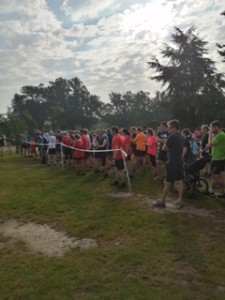 The start of the 5k.

Today we had a strong 204 finishers, who were assisted by 48 volunteers, one of whom was Joe Watts. It's great to see him as a regular participant in Dunorlan Park, because it was down to Joe's hard work that RTW parkrun began. Without him, there's no way we would have reached 300 events. 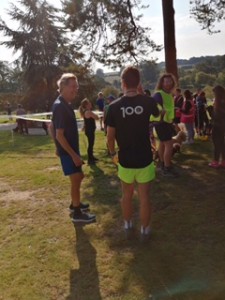 It was also great to see so many people wearing their parkrun milestone t-shirts, summing up our achievements over the last 300 events, and providing a lovely colourful scene of white, lilac, red, black and apricot, and even a few of the dark green 250 shirts! 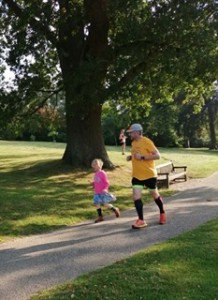 This little girl joined her Dad for Heartbreak Hill - the place where we all need a little extra encouragement!

For me, it has been a privilege to have been part of the parkrun volunteering team since December 2019, and as one of the RDs since July, and I look forward to playing a role in the next 300 events. I was speaking to today's RD Jane, who alongside volunteer co-ordinator Judy, has been here since the start of RTW parkrun. She told me how the first event only had six volunteers. We have grown so much in 300 events, and I look forward to seeing how much we grow in the next 300!

Another long-"running" participant, William's first experiences of parkrun were in a carrier on his Dad's back as a tailwalker, now the youngster completes the course himself (with Dad's supervision).