The whole ethos of parkrun is that it is a run and not a race, and there are no winners and losers. But for once we will allow ourselves to use the "win" word. For, on Tuesday 11th October 2016 during a glittering award ceremony at the Assembly Hall Theatre, Royal Tunbridge Wells parkrun won the "Best Group" category in the Love Where We Live awards 2016.

Over 200 individuals and groups from across our Borough had been nominated for awards in the seven categories - ranging from "Charity of the Year" and "Ethical Business" to "Young Sports Achiever". The three finalists in each category were invited to the Oscar-style award ceremony. Guests in attendance included the Mayor, the Council Leader and Chief Executive as well as the various sponsors of the awards. Given the wide range of dedicated volunteer groups across the Borough it was a great honour for RTW parkrun even to achieve recognition as a finalist.

At the awards night we were represented by Event Director, Joe Watts, and four regular core volunteers - Run Directors Louise Fitzgerald & Rob Campbell, Scanning Queen Judy Guest and social media guru/photographer/run report writer & regular runner, Richard Woodfield. There was not long to wait as the "Best Group" award was first up, and almost before he knew it a rather surprised looking Joe was on stage accepting the award from the Mayor, David Neve. The Mayor had given the starters orders at our anniversary parkrun in April 2016 and remarked that, watching local MP Greg Clark steaming up the last hill, it was difficult sometimes to believe that parkrun was not competitive! Accepting the award Joe paid tribute to all the many people who contribute their time and energy to make our parkrun the event that it is.

The other finalists in our category were Compaid Volunteers, who work with hundreds of disabled and elderly people to help them overcome digital, social and financial limitations and Kent High Weald Partnership Volunteers, who work to involve the local community in preserving and enhancing our environment. Either group would also have been worthy winners.

Special guest at the Love Where We Live awards evening was paralympic gold medallist, Will Bayley. Will was brought up in Tunbridge Wells and played table tennis at Byng Hall (next to Skinners' School) in his teens. In addition to winning a table tennis gold medal at Rio, Will achieved further fame when he received a yellow card for climbing onto the table in celebration of his achievement! Will spoke about the determination needed to succeed against adversity - in his own case the many serious health difficulties he had faced. In a nice touch, when asked about which individual had most inspired him to achieve in sport, Will said that his real heroes were all those volunteers who had helped him behind the scenes. People like those who had regularly given him lifts to training and events as well as his coaches.

It's good on an occasion like this also to recognise the help and support that our event has received from Tunbridge Wells Borough Council. After all, it were they who provided the start-up funding which is required to set up a parkrun event as well as providing us with one of the most beautiful venues in Kent, Dunorlan Park.

Joe with our certificate and Louise with the glass trophy. Meanwhile Judy takes the (heart shaped) LWWL biscuit!

Joe - and the trophy. 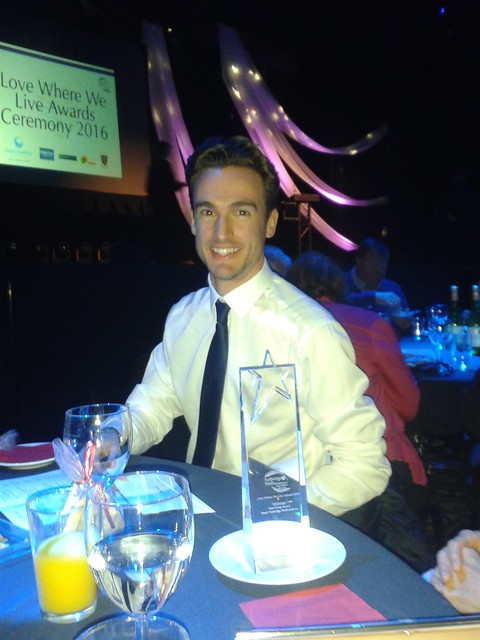 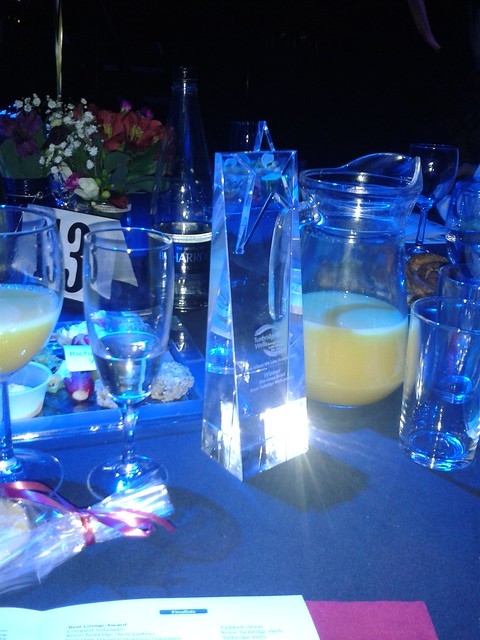