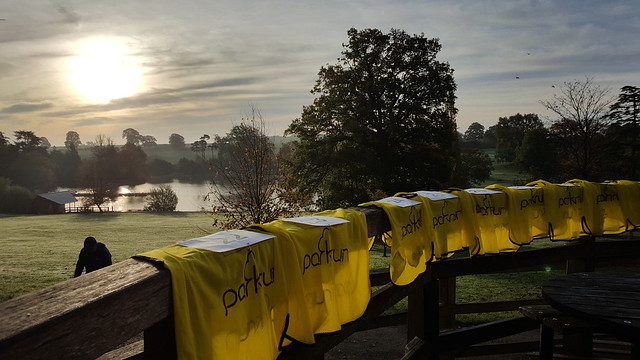 Arriving in good time to take up volunteer duties, for several minutes I completely failed to recognise Noeline disguised in her fetching dark green wig. Fortunately, Noeline's voice is unmistakable and so my misunderstanding was soon sorted out. It was a lovely autumn day for our pacer spooktacular event - low slanting sunshine bathing much of our course in a warm glow. Another good turnout - of 266 parkrunners and 30 volunteers - enjoyed the event.

Run Director, Louise, announced to applause that Dennis Sanson had joined the Junior 10 parkruns club and Steven Barrett, Nick Fitzgerald and Suzanne Young had all joined the 50 club.

Joe read out a poem by Zena - intended to encourage parkrun volunteering.

"From set up to end, some time we will spend,
Marking the course with our posts,
In bright yellow vests, but no time for rests,
Volunteers - we're your welcoming hosts.

As we huddle together in all sorts of weather,
Our speaker will lay down the rules,
Pleases listen and learn, it could be your turn,
If the temperature rises or cools.

If you like taking pics and adjusting the fix,
Dust off your old camera lens.
There's so much to see and yes it's all free!
Animals, family and friends.

Tokens to sort or write the report,
A selection of tasks to choose,
It really is fun, combine with a run,
Step forward you've nothing to lose."

Ground conditions out in the field had considerably improved from the previous week and this - combined with the efforts of our pacers - contributed to the spooktacular number of 58 personal bests achieved.

A range of unusually clad characters turned up to parkrun this week! 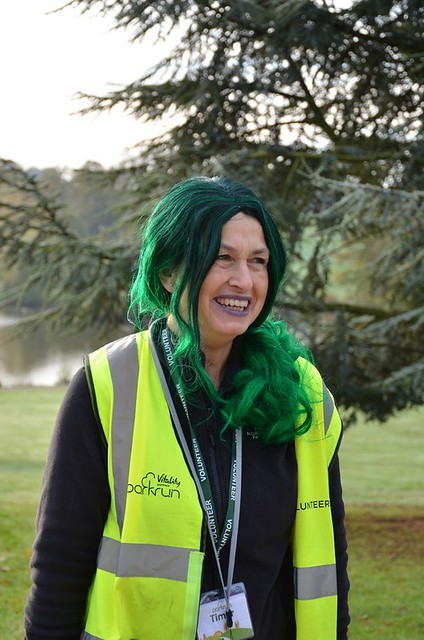 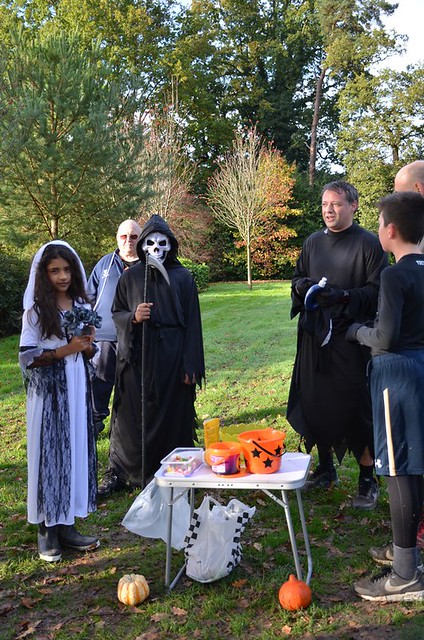 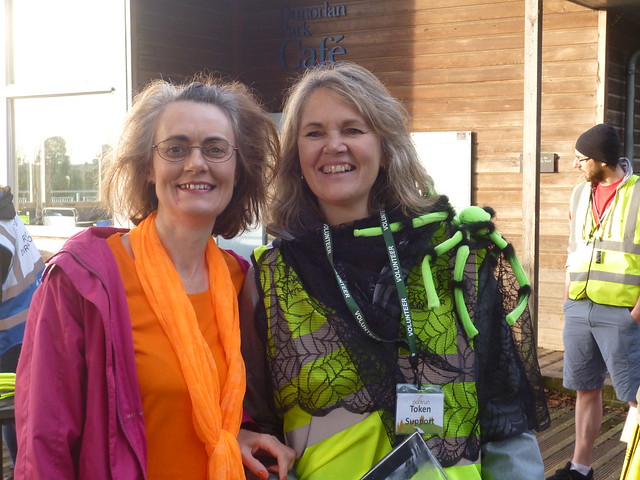 Spider hitching a lift with Robert. 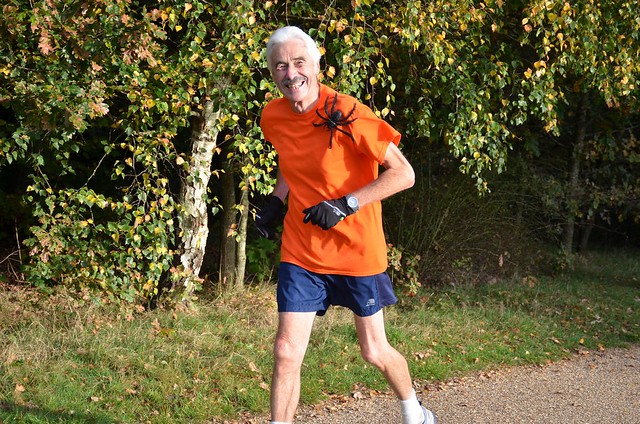 A gorilla was feeling the heat ... 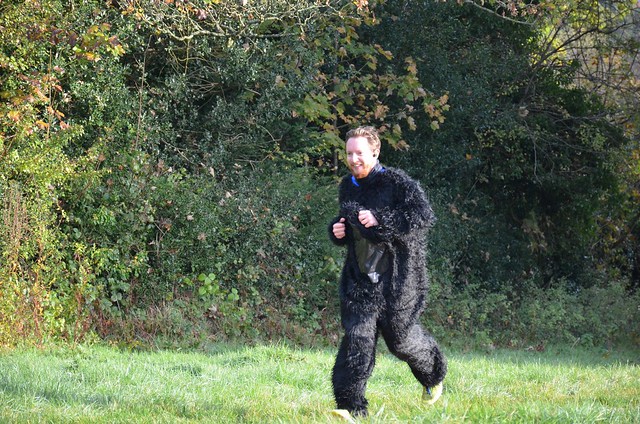 A youthful skeleton rattles around the course 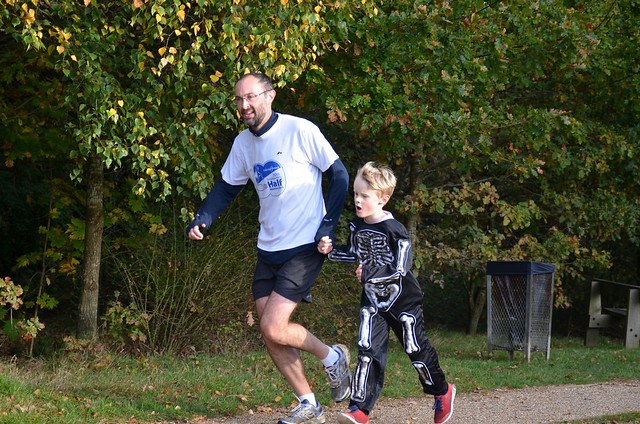 What comes down at parkrun must go up! 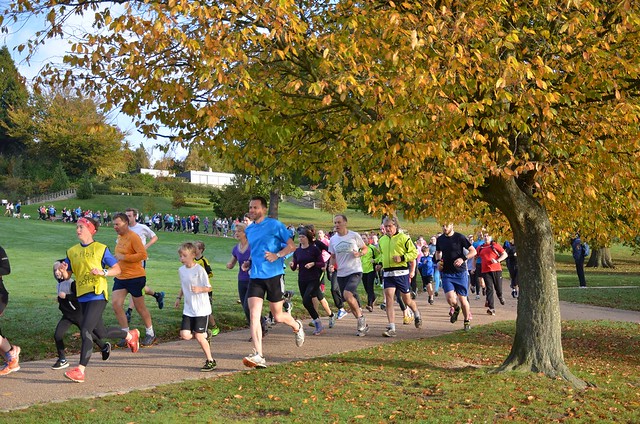 Feedback from two parkrun tourists this week on Facebook both mentioned that last hill!
"I was a tourist here today. Thanks for the welcome. Lovely course apart from the hill at the end!!! Well done to all the volunteers that make it possible, especially the 30 minute pacer that encouraged me at the finish." (Jon) "I was a tourist too! Beautiful run but glad my usual PR is flat, that hill was a killer at the end!" (Harriet)

Incidentally, the photo above is just one of a number of pictures taken from this spot as the parkrunners first come down the steep hill from the starting line. I was encouraged, looking through this sequence of pictures, to see that the great majority - and indeed possibly every single one- of the parkrunning dogs this week had followed the advice to start from near the back where there there is much less risk of accidents with tripping over leads and the dogs getting over-excited in the crowded throng. So, well done dogs and their owners!

Pacer, Amy, rising to the occasion! 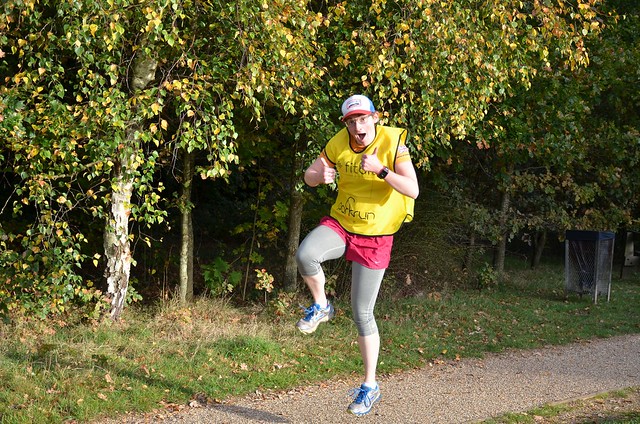 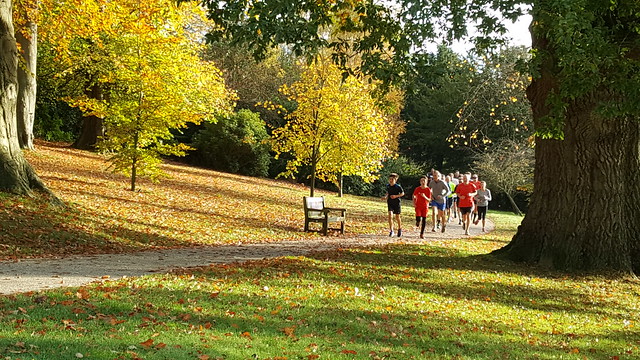 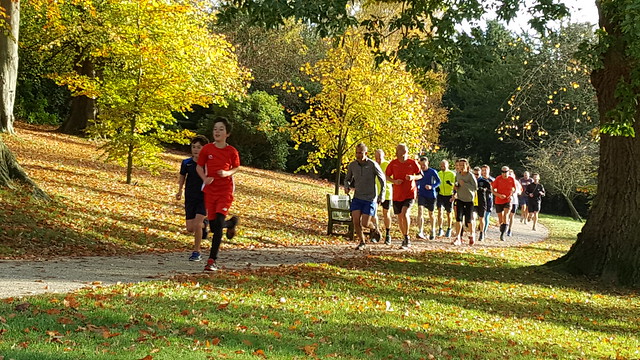 This week's volunteers were:

Easter Saturday dawned bright and as the number of runners assembling for the new runners' briefing swelled it was already clear that a bumper attendance was in prospect. Our attendance total of 268 parkrunners was the second highest - exceeded only by the attendance last Christmas Eve. Maybe it's something about the imminent prospect of eating lots of chocolate that brings out the parkrunners in force!

It's worth highlighting this notable statistic: We had a total of 62 first timers to our course, of whom no less than 40 were running their very first parkrun. A very warm welcome to all Saturday's first timers (including parkrun tourists) who may be reading this run report. We also had a plethora (63) of personal best times achieved by returning runners, so that was a further cause of satisfaction.

The honour of bringing up the first 100,000 kms of parkrunning at Royal Tunbridge Wells parkrun went to day's 75th finisher ..... who turned out to be an unknown runner without a barcode! However, on checking my finishing token I was pleased to discover that, as 76th finisher, I had completed the first parkrun to count towards our second set of 100,000 kms!

The finishing funnel - another 55 multicoloured kms completed by our parkrunners 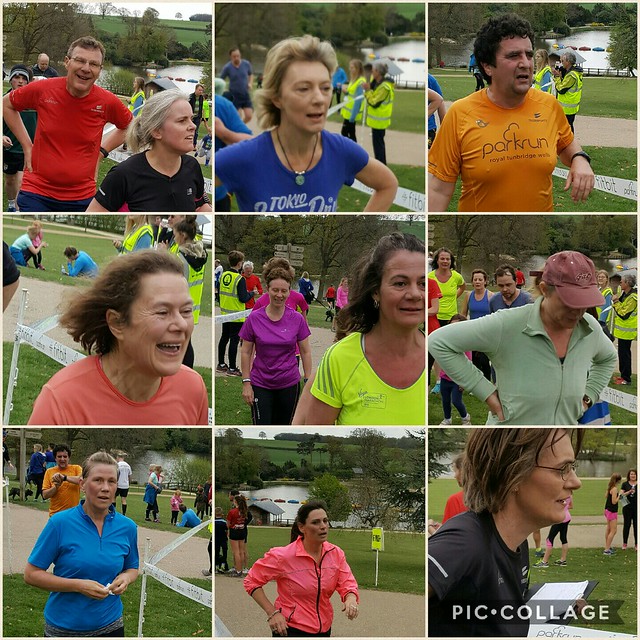 Another notable achievement was the first time (as far as anyone can recall) that we have had a canine first finisher. Magnus was running with parkrun tourist James Buckley. 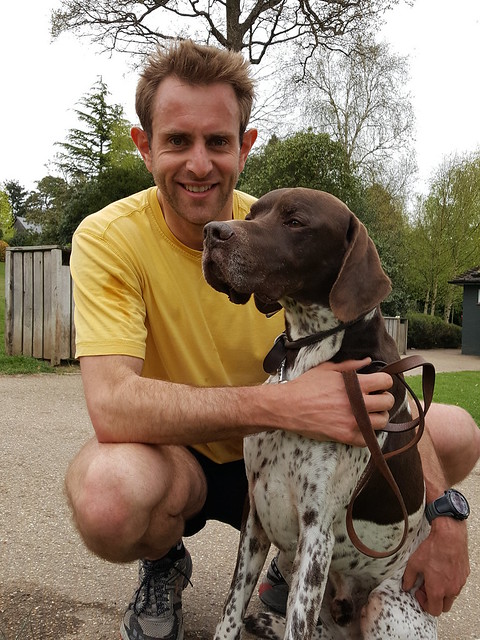 You heard it here first!

Those of you who were at our second anniversary event almost a year ago (on 25 April 2016) may recall that in a short speech our local MP, Cabinet Minister and parkrunner Greg Clark said that steps would be taken to dissuade local councils from seeking to charge for parkrun events. This followed the controversy over an attempt by a council near Bristol to make a charge for the Little Stoke parkrun. All went quiet on this front for a number of months. But a few days ago we heard of the public consultation that has just been launched by the Department for Communities and Local Government about "... the Government’s proposals to legislate to put it beyond doubt that local authorities, including parish councils, cannot charge parkrun or junior parkrun for the use of public parks". The public consultation runs until 5 July 2017.

So, it's clear that back last April we had our own exclusive early access to national news during the pre run formalities. The moral of the story: always pay attention to the pre run briefing - you never know what vital intelligence you might otherwise miss!

Volunteers on duty at the finishing funnel entrance....