Event Director Joe Watts began by welcoming Chris Mullaley to the 50 club. Chris has run 50 parkruns, all but two at RTW. Congratulation, Chris! Secondly, he announced that Mark Scott was running his 100th parkrun today, all but ten at RTW. Well done Mark!

Next, Joe announced the winners of the annual points competition, with certificates presented by David Neve to: 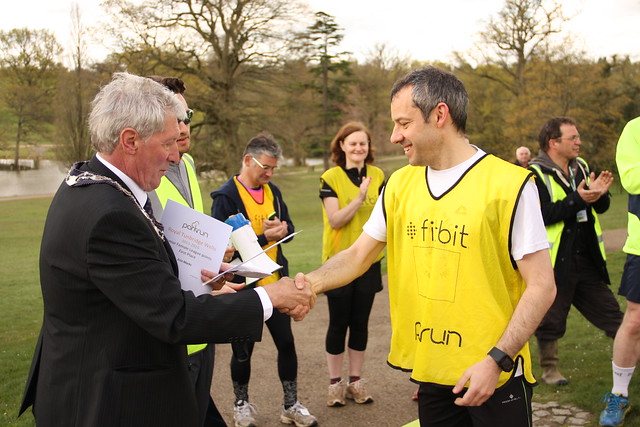 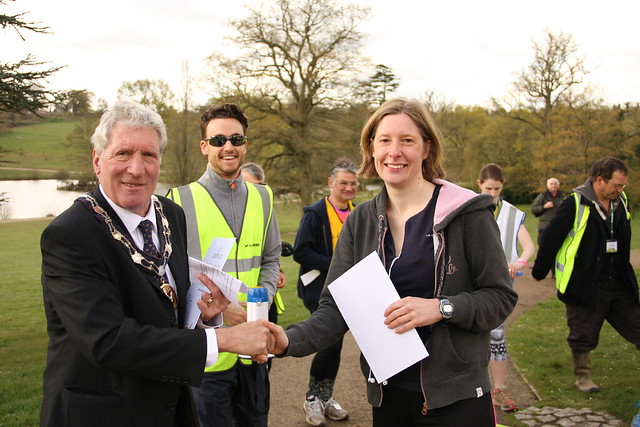 and certificates presented by Greg Clark to: 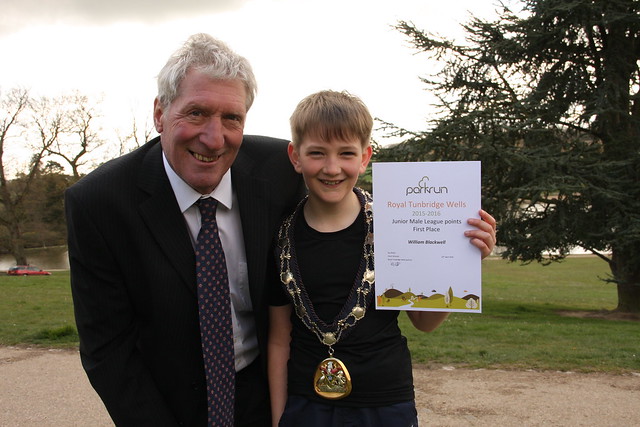 Greg Clark reminded us that today was William Shakespeare's birthday, with an appropriate quotation from Romeo and Juliet: “Wisely and slow; they stumble that run fast”. These are wise words indeed, but the wisdom of the Bard seems to have been comprehensively ignored by parkrun finishers (including Greg himself!) as today's results show!

He then turned to a more serious matter. In Tunbridge Wells, we are extremely fortunate to be able to run in the beautiful surroundings of Dunorlan Park. This is due in no small part to the ongoing support of Tunbridge Wells Borough Council and recognition of the contribution that parkrun makes to our local community.

As many will have read, a council in another part of the country has decided that parkrun should pay to hold their event in a local park. Sadly, this has led to the suspension of that event. When parkrun was established, a fundamental principle was it should be open to everyone, whatever their ability, and should be safe and easy, and above all, free to take part in. Paying for the use of parks and other open spaces would put that principle in jeopardy. Now, Greg Clark besides being our constituency MP, wears another hat as Secretary of State for the Department for Communities and Local Government, and prior to the run he announced that steps would be taken to dissuade local councils from charging parkrun to hold its events.

David Neve then welcomed us and drew attention to the delights of Dunorlan Park, with its extensive trees and shrubs, lake, and abundant wildlife, a very pleasant setting in which to undertake strenuous physical exercise! He had agreed to start the runners off and to greet them as they returned to the finish line. 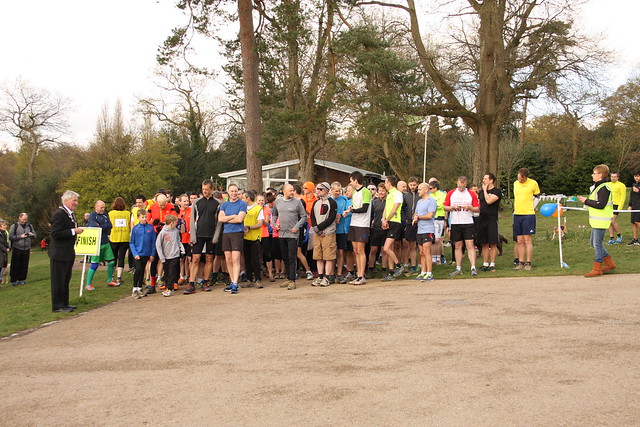 Event Director Joe Watts went on to thank fellow Run Director Louise Fitzgerald as well as the three Run Directors, Steve Barnfield, Rob Campbell and Simon Jones, who in the past year have begun to share the burden of managing the weekly event. Thanks were also offered to the core team of volunteers, including our two non-running ladies, Judy Guest (who had volunteered at 49 of the 51 events in this past anniversary year) and regular marshal, Gloria Richards. 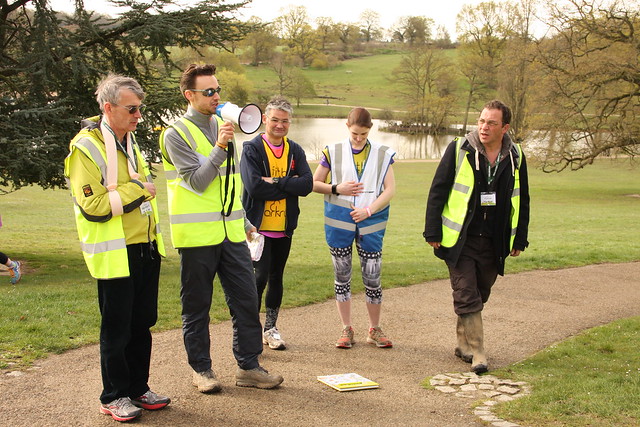 Finally, Helen Sanson thanked Joe himself and Louise Fitzgerald for all the considerable behind-the-scenes work they do to make the event happen like clockwork every week.

With that, the megaphone was passed to Louise, this week's Run Director, to welcome returning runners, first-timers and parkrun tourists to the RTW parkrun and give the pre-run briefing. David Neve gave the starting signal and we were off … 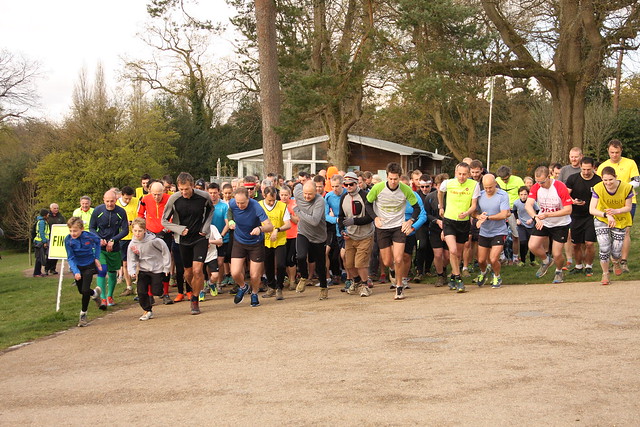 We welcomed many first-timers, including your friendly neighbourhood Spider-man (who went on to run the London Marathon on Sunday):

A stiff headwind did little to damp enthusiasm and spurred on by a magnificent team of pacers, an impressive 57 Personal Bests were gained! Sad to relate, yours truly, nursing a dodgy knee was not one of them, but there's always next week! The course has benefited from a few days of Spring sunshine and most of the event field has quickly dried-out to offer a good running surface. (We won't mention The Quagmire!). 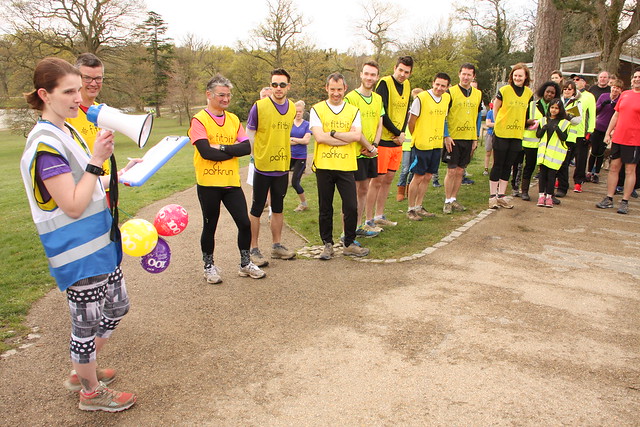 As part of the celebrations, finishers were greeted by a superb array of hot and cold snacks, plus cold drinks, kindly prepared and served by Sofia Baguley and Judy Guest. Meanwhile all received a raffle ticket from Gabby and James Baguley. A host of raffle prizes had been donated, so there was no need to include the items of lost property (running shirts, jackets, water-bottles, etc.) which seem to accumulate during the year! Pride of place in the raffle was the magnificent cake, baked by Zena Hassell. This featured an iced running shoe, stuck deep in glistening mud (chocolate), which aptly represented running conditions in the past months! 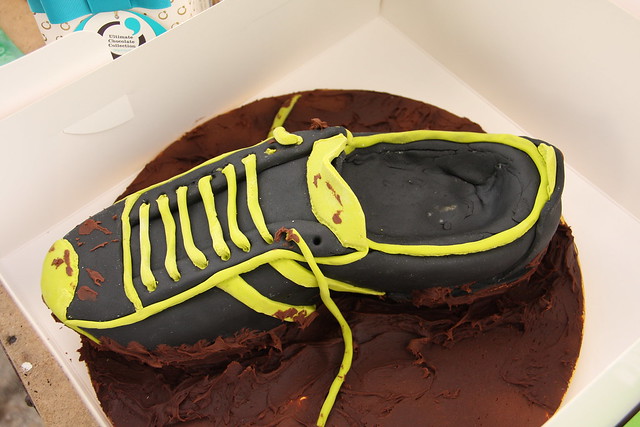 Finishers enjoying the complimentary refreshments provided by some of our volunteers: 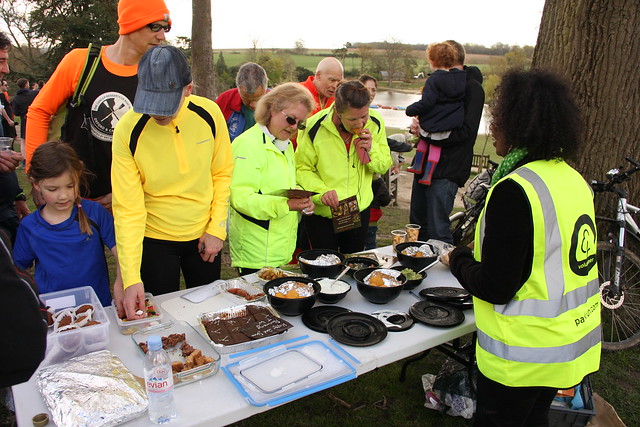 All in all, a good time was had by everyone!

And to look forward with utmost optimism to Royal Tunbridge Wells parkrun's third year, another Shakespearean quote (from Julius Caesar): “Bid me run, and I will strive with things impossible.”― maybe even a new Personal Best!

New volunteers are always welcome. No experience is necessary as full training is given. If you would like to help please get in touch!

Charles Bowley took an excellent range of photographs this week which you can find on the event Flickr page. If you took some and would like to share them, please upload them too.

Full results of this week's event with all the statistics, and a complete event history can be found on the Royal Tunbridge Wells parkrun results page.

This week's run report was written by David Harman. If you would like to write a future run report, please e-mail royaltunbridgewellshelpers@parkrun.com

It was a wild and blustery day and my parkrun record of never having to run in the rain finally came to an end - on my 32nd parkrun. In fact the rain during the run was not that heavy and only started on the second lap. But, undeniably, there was more than enough moisture in Dunorlan Park to go round.... The golden glow of autumn leaves was somewhat eclipsed by the garish orange of the temporary plastic fencing put up around the park to safeguard the spectators at the big firework display later in the day. 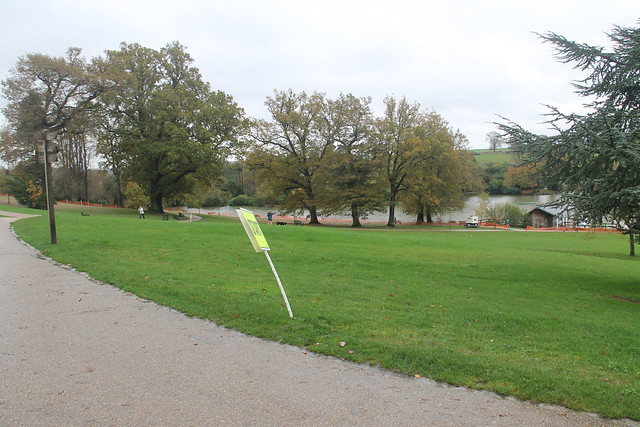 During the pre-run briefing by Steve Barnfield there was a big round of applause for David Harman, the last ever winner of the monthly Sweatshop prize, as well as a warm welcome to 14 first timers (which included several parkrun tourists). Steve also warned the runners to take care of the sizeable excavations made by unknown creatures on the path that brings the runners back down from the field to the lake. 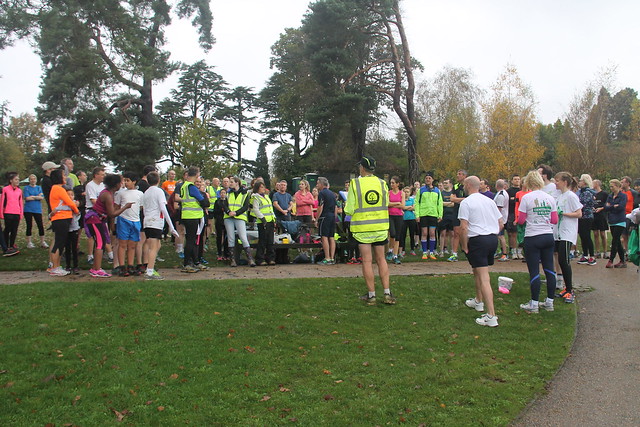 The course offered a big challenge to the 139 runners - the top field was absolutely sodden and the mud deep. In various places runners were faced with a decision - whether to run straight through the middle of the mire or to try a somewhat longer way round in the hope of finding slightly easier going. It reminded me of the Oxford/Cambridge boat race where the direct route isn't necessarily the fastest and the cox aims to gain advantage by steering in unlikely directions to avoid the worst of the rough water. Given the conditions it was hardly surprising that there were just 8 personal bests and that the first placing today (at 21.49) was the slowest of any of the 78 parkruns so far at Dunorlan Park, but I reckon we should all feel entitled mentally to deduct a minute or two from our results to give a true reflection of the effort! 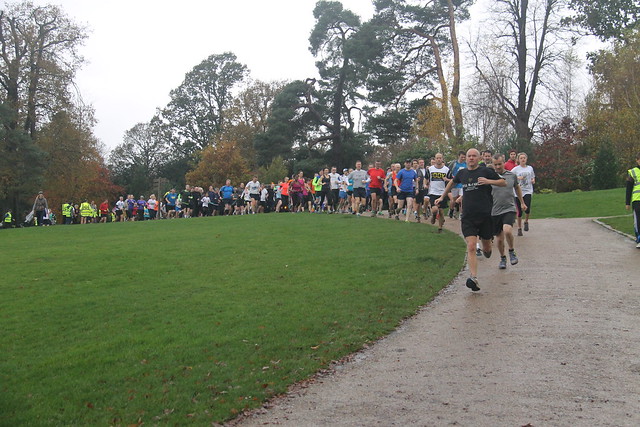 A quick plug for trail running shoes during the wetter months - I had just bought a pair and was using them for the first time. I found they make a big difference when trying to change direction on the slippery mud. 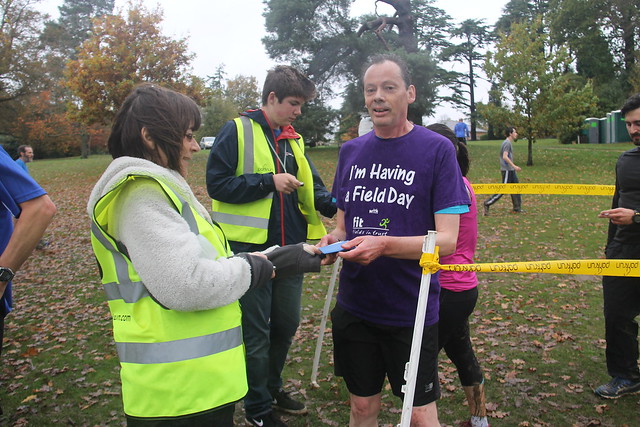 Afterwards, some of us adjourned to the other end of the park with the Deputy Mayor of Tunbridge Wells and representative of the Fields in Trust to attend the ceremony to mark Dunorlan Park's memorial garden being given protection as one of the Fields in Trust's Centenary Fields. It was fitting that this event, at the Victoria Cross Grove, took place on the eve of Remembrance Sunday. Among those saying a few words was local MP, Greg Clark, who often takes part in our RTW parkrun. As Fields in Trust highlights the value of parks to their local communities it was appropriate that the photos of the event featured some of our most regular parkrun volunteers who, week by week, enable us to have an enjoyable and invigorating start to the weekend. 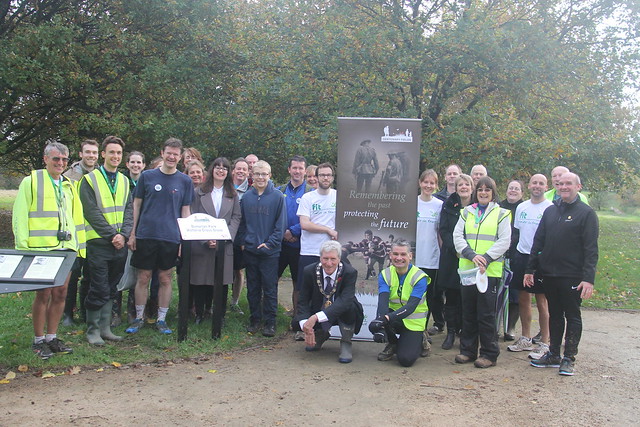 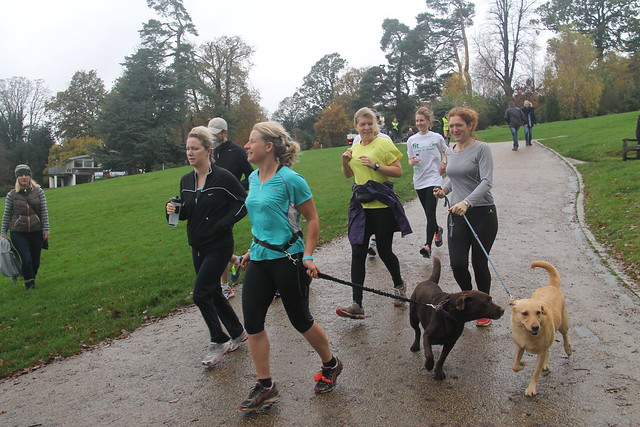 By way of a postscript, I like browsing through the parkrun statistics. There's a mine of interesting information - not least the age grade % figures which can provide considerable encouragement to us runners of maturer years! But, when you get time, do take a quick look at the stats of some of the familiar names of the RTW core parkrun team. You will see that some of them have volunteered dozens and dozens of times. My special vote of thanks goes to those who set up the course beforehand and so have to get up even earlier on a Saturday morning. 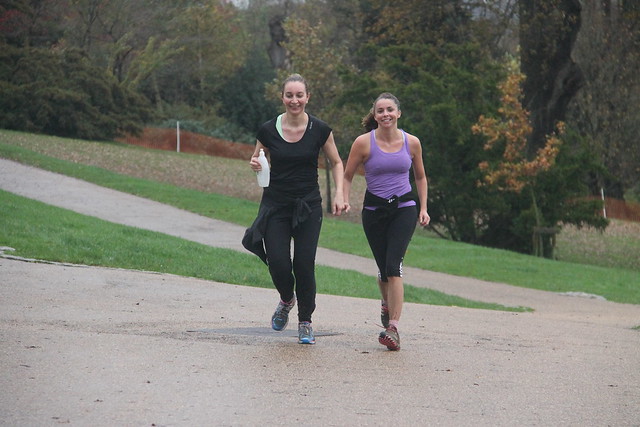 Thanks to both Donna Carr (Maidstone parkrun Event Director) and Jessica Carswell for taking this week's photos - all of which can be viewed on our website.

Full results of this week's event and a complete event history can be found on the Royal Tunbridge Wells parkrun results page.

If you would like to write a run report for one of our events then please e-mail royaltunbridgewellshelpers@parkrun.com