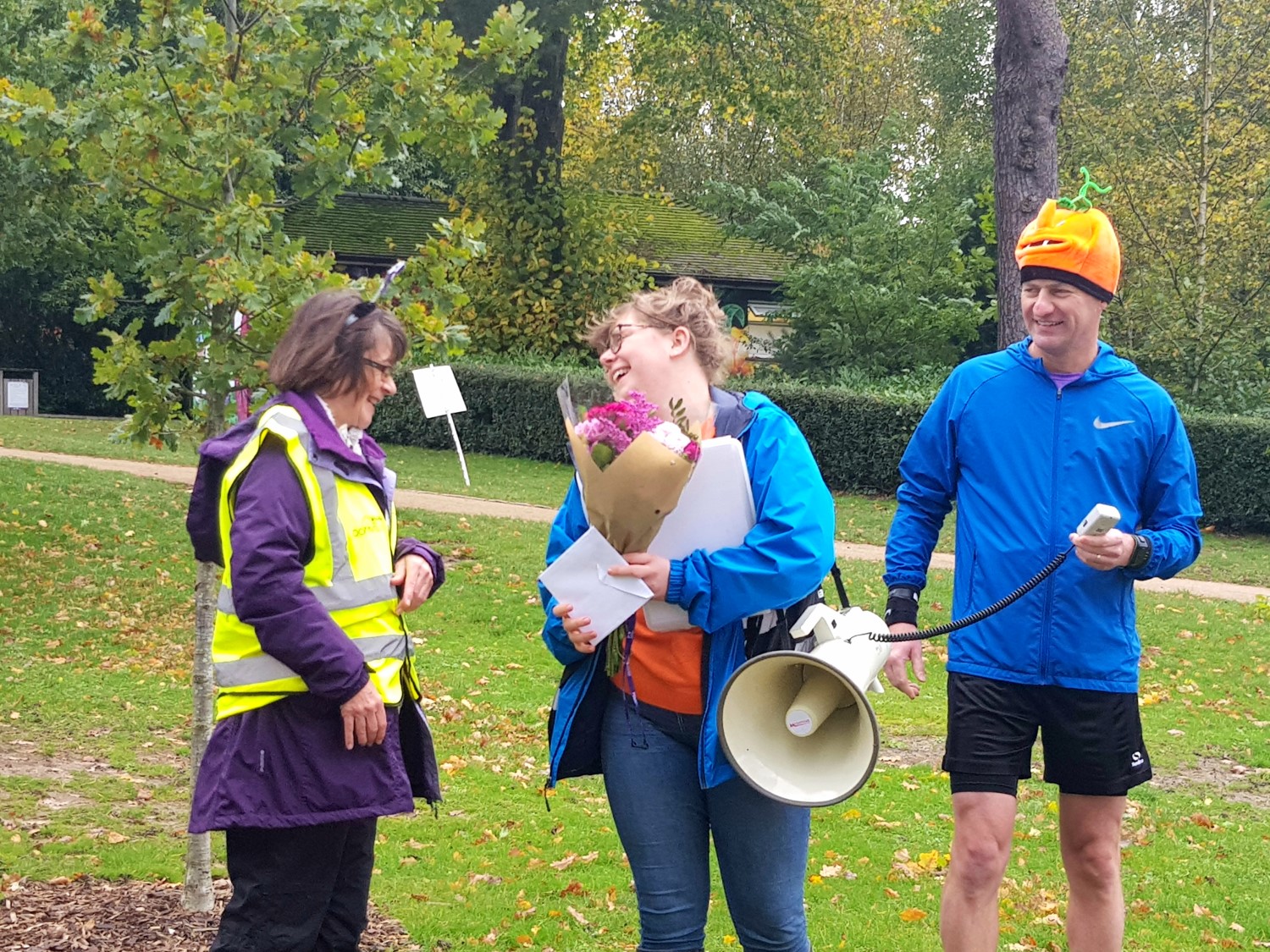 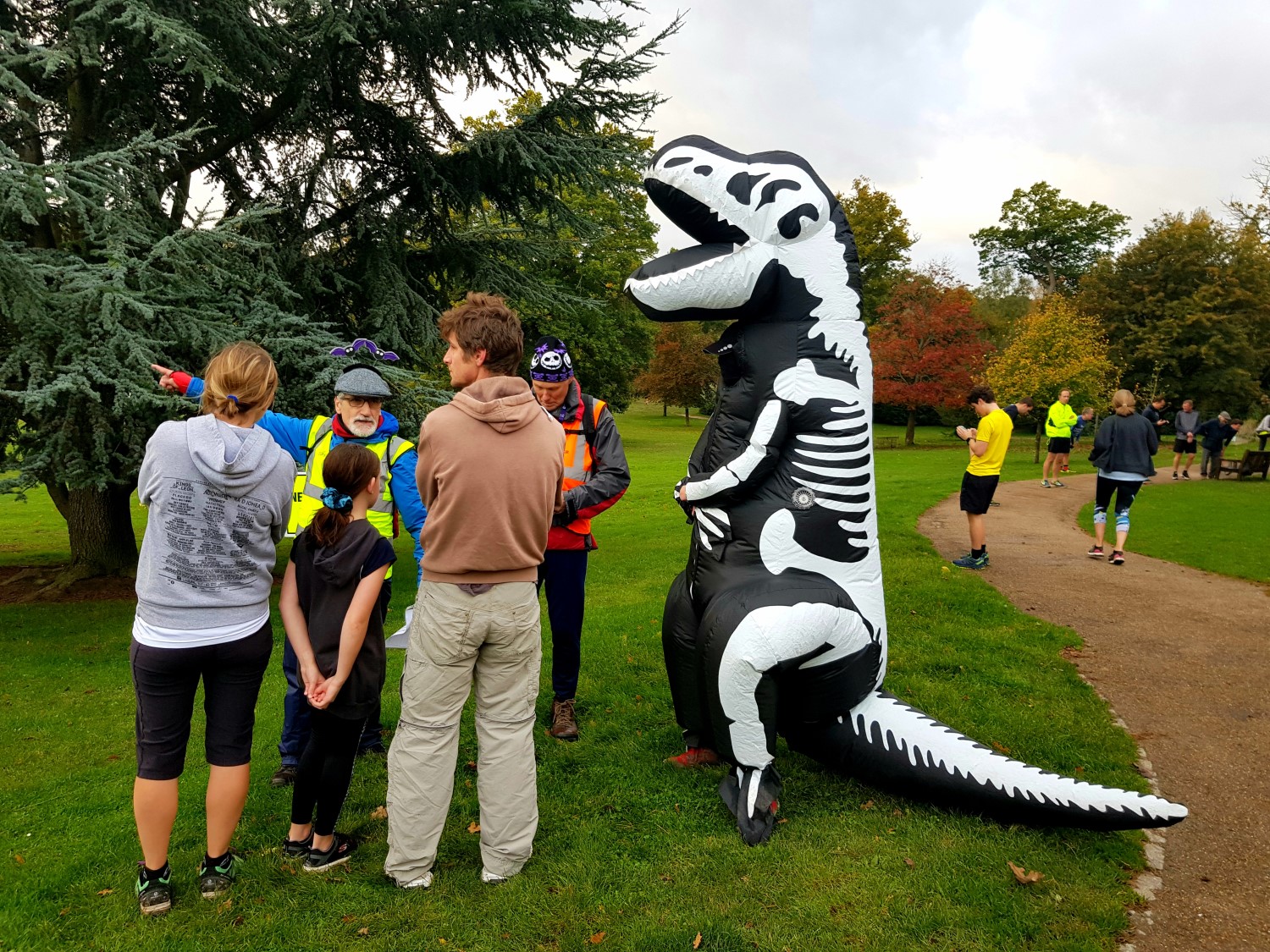 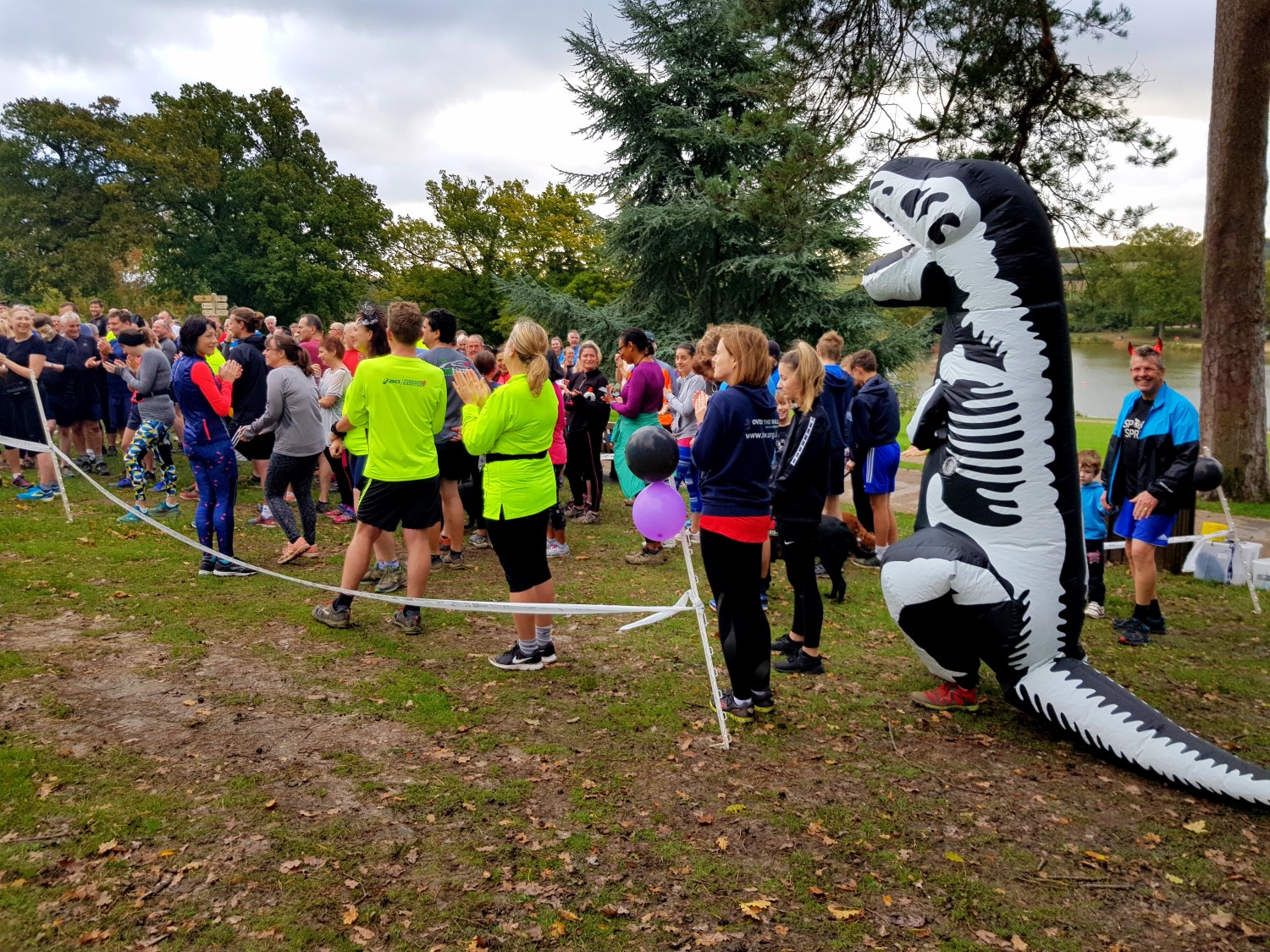 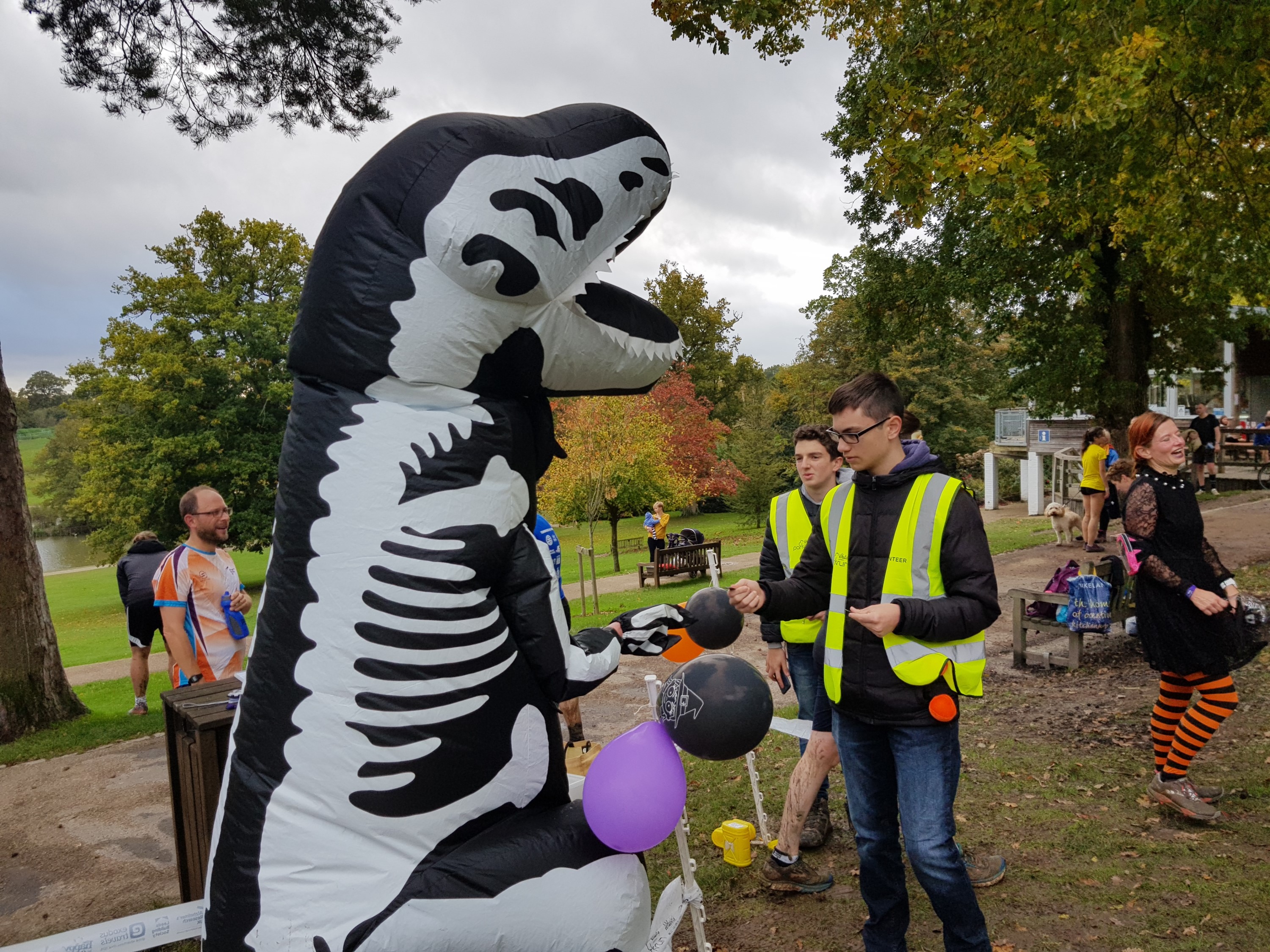 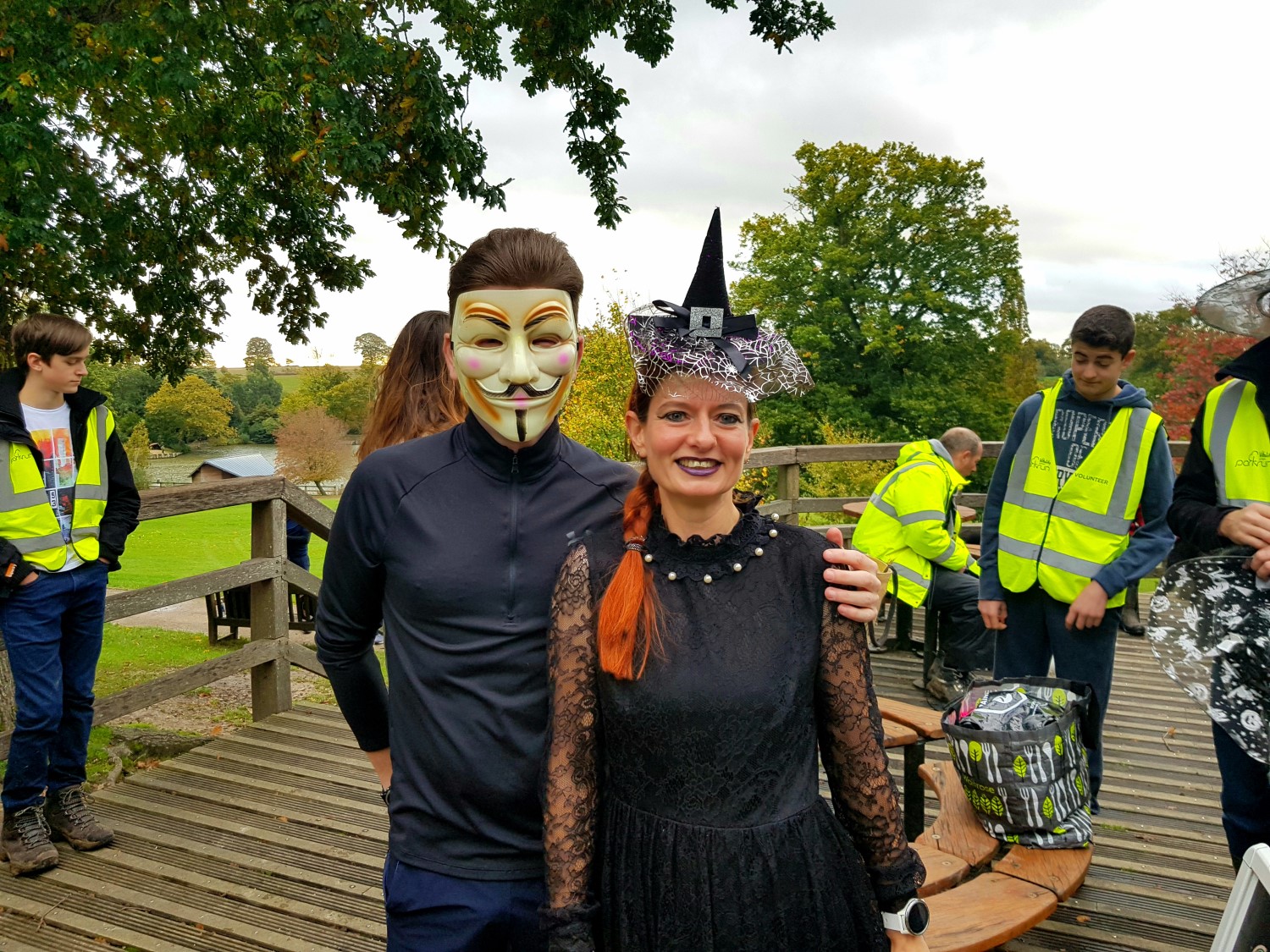 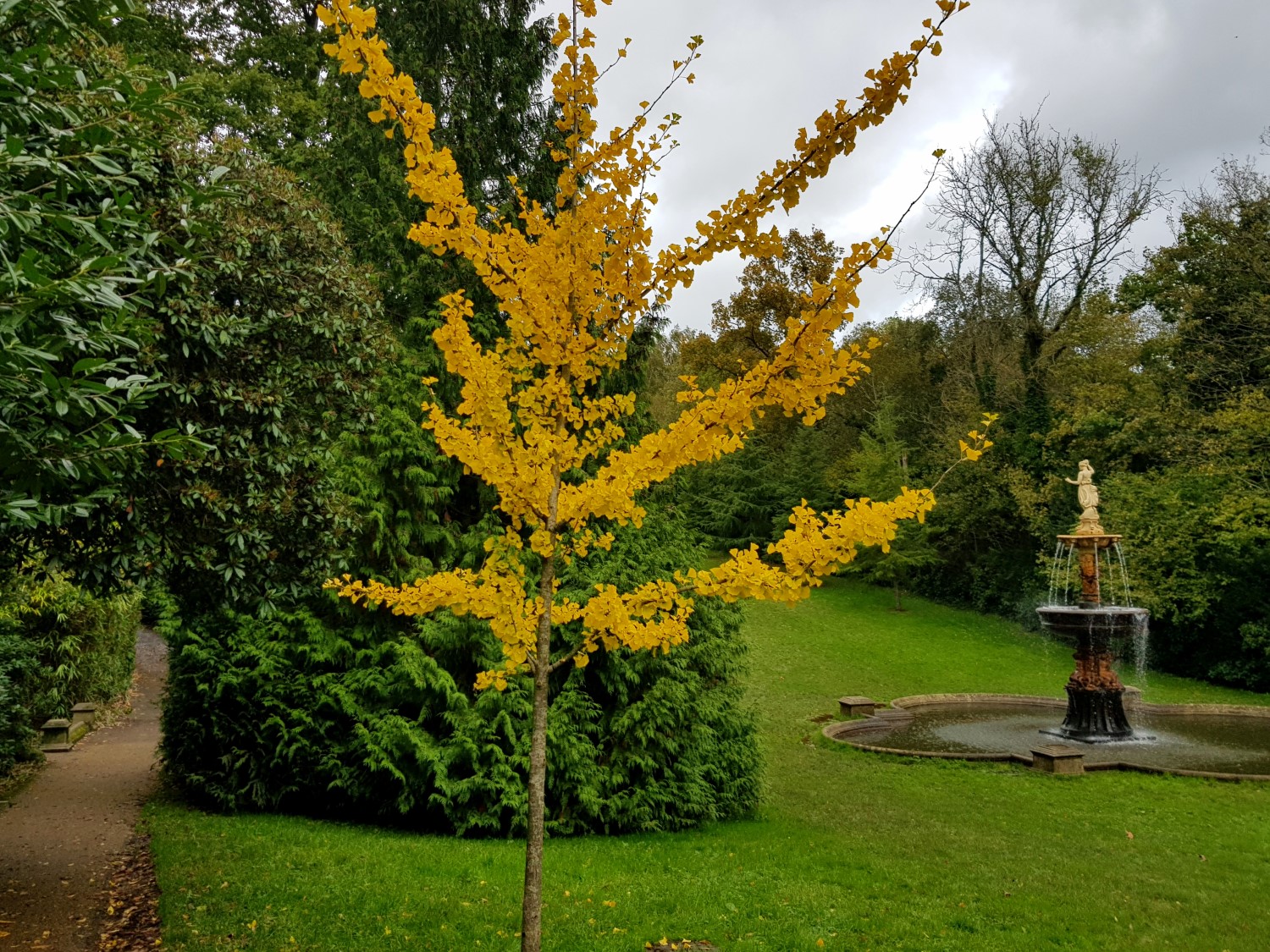 If you have been coffin and spluttering recently, leave the medicine bottle at home in the bathroom cabinet and head to your nearest parkrun, where a weekly alternative prescription is sure to make you feel much better. Although local G.P, Dr Acula, was unable to attend this weeks event, due to a high demand of blood doning at his late surgery, several of his patients took his advice and resurrected their bodies at Dunorlan Park. Amongst the 263 parkrunners were several high spirited individuals, interacting with no less than 16 Pace Invaders! 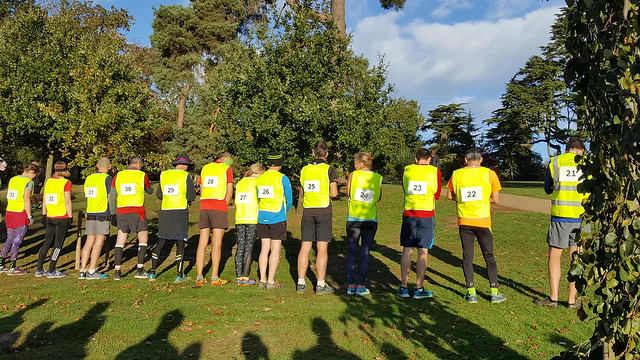 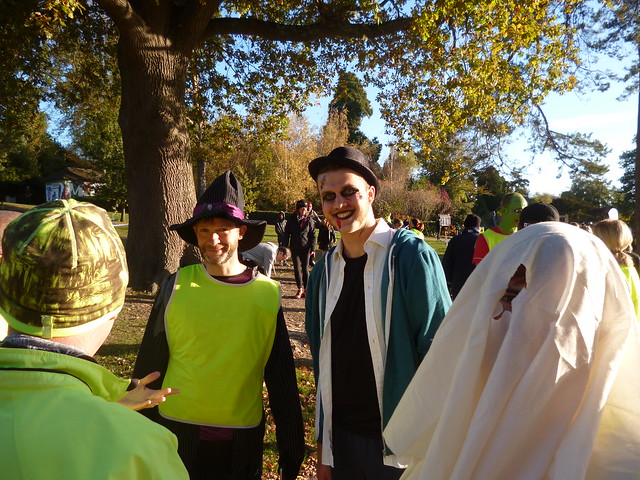 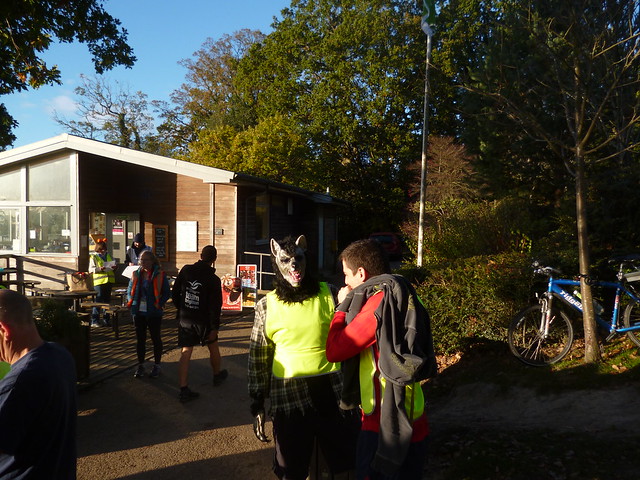 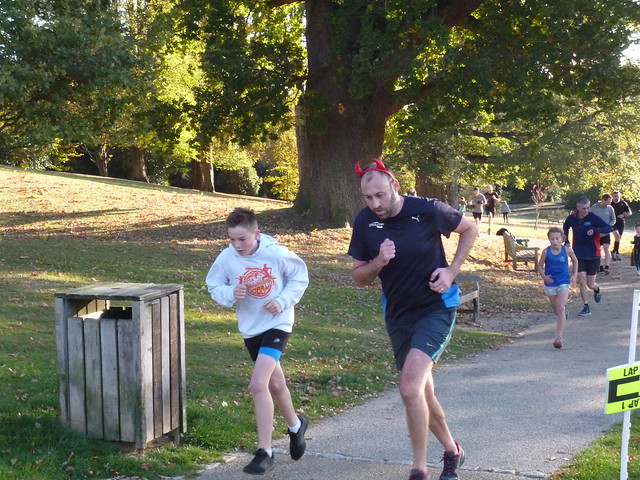 All smiles as a pumpkin carves around the events field 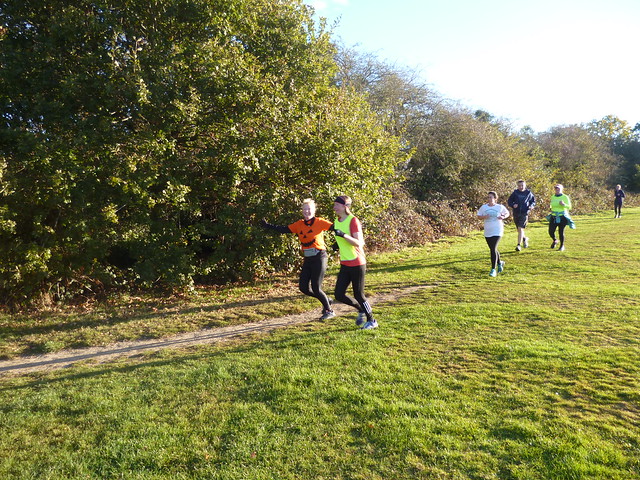 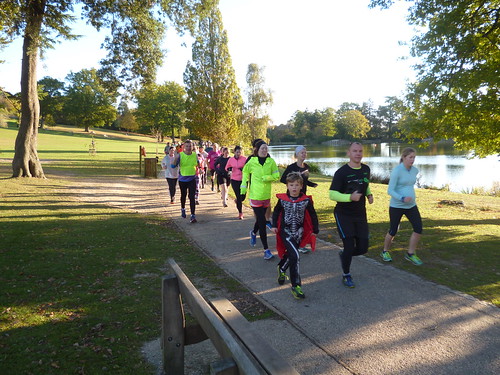 Back to ‘Wonky Bear’ who very much enjoyed his visit to RTW Parkrun. He is a special bear made up of recycled hi vis volunteer vests and travels around to different parkrun events! To find out more checkout RTW parkrun/Twitter and Facebook. 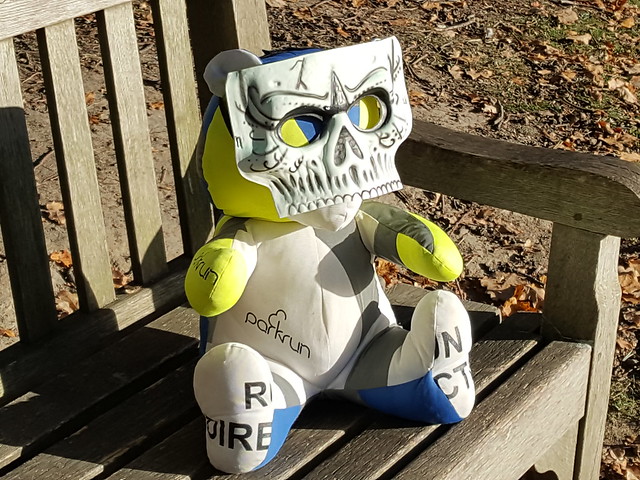 Please note that next week's parkrun (3rd November) is on as usual, however, the Pembury Road Car Park will be much busier to accommodate vehicles for the setting up of the fireworks display later that evening. It would be advisable to try and car share, cycle, jog or walk if possible.

This week 263 people ran, jogged and walked the course, of whom 43 were first timers and 31 recorded new Personal Bests. Representatives of 28 different clubs took part.
The event was made possible by 39 volunteers:

Today's full results and a complete event history can be found on the Royal Tunbridge Wells parkrun Results Page.

Anyway, this week's Run Director, Rob Campbell was on top form as he gave the pre-run briefing in his inimitable style. Taking pride of place in the announcements was news that Ryland Atwood has joined the 50 Club, having run his 50th parkrun last week - all but one of these at Royal Tunbridge Wells.

The weather started – and remained dull and grey but thankfully dry, and although the grassy sections were damp, the surface was firm with just the odd divot / rabbit-hole to watch out for. These good conditions were reflected in a sizeable crop of PBs this week – 28. I didn't manage one but did achieve a best 2015 time, exactly a minute off my PB. Oh well … so near, yet so far away!

Sadly, runners who forget their barcodes or have not registered do not receive personal finish times. Registering only takes a few moments and once registered you will get a finishing time at any parkrun event – so long as you don't forget to bring your barcode (#DFYB)!

Our team of volunteers are vital and parkrun would not be possible without them. New volunteers are always welcome! Why not check our volunteer roster to see which roles are vacant at future events?

Thanks to Gus Malone for taking this weeks photos - if you took some too and would like to share them, please upload to the event Flickr page.

31st October: Something only slightly less terrifying than the alarm clock going off at 08:30 on a Saturday occurs – Hallowe'en descends on Dunorlan Park! Ghouls, ghosts, spectres, phantoms, vampires, banshees, demons, werewolves, zombies, spooks and poltergeists will be haunting the course – and that's just the runners! However, if you somehow make it to the finish line unscathed, there will be sweet and savoury treats, kindly made by our culinary wizards Judy, Gloria & Sofia! Further details can be found here.

7th November: On the eve of Remembrance Day, we will be joined by the charity Fields in Trust (previously known as the National Playing Fields Association) to celebrate Dunorlan Park’s memorial garden's protection as one of Fields in Trust’s Centenary Fields. This programme works in partnership with The Royal British Legion to safeguard green spaces to honour the memory of those who lost their lives in World War I. After the run at 10am, a Centenary Fields Dedication Ceremony will be held at the Victoria Cross Grove (past which our course runs), the park’s memorial garden, with the unveiling of the Fields in Trust plaque. Full details of the event can be found here.