This week 333 people ran, jogged and walked the course, of whom 54 were first timers and 23 recorded new Personal Bests. Representatives of 24 different clubs took part. The event was made possible by 36 volunteers.

Our run report is written by Benny Fiddimore who is taking part in his Bronze DofE award.

Today, the weather in Dunorlan Park was not the greatest. It was cold, grey and misty. However, that miserable atmosphere was soon changed. Firstly, I had a quick talk with Sonja King, who is celebrating joining the parkrun 100 club! Since August 2014, Sonja has clocked up 64 parkruns here at Dunorlan, with the majority of the rest completed in Croydon. RTW parkrun is extra special for Sonja, because it started the day after her son was born! Congratulations on all the hard work put into reaching 100 parkruns Sonja! 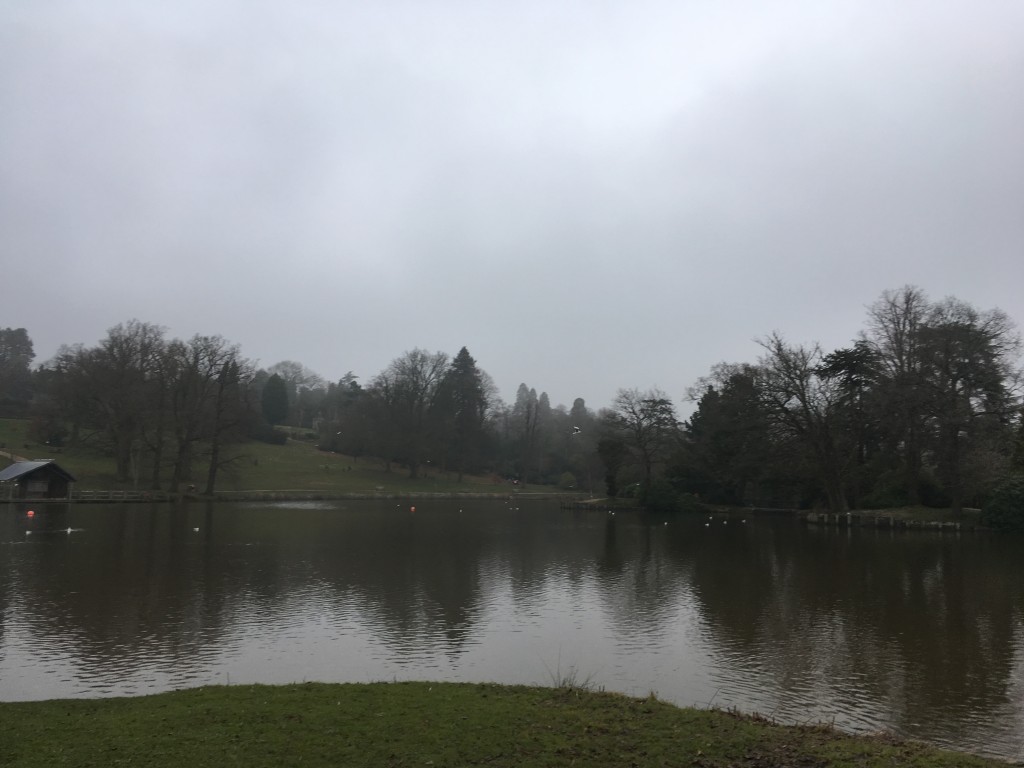 The weather at parkrun was cold, grey and misty.

Just before the event was about to begin, Run Director Mark was joined by a very special guest for today’s pre-parkrun briefing. Dame Kelly Holmes was here to talk about 5K Your Way. This is a charity which supports and encourages people living with and beyond cancer to get out and get active. She said the point of the charity was to help people get active in a "supportive, friendly environment".

Following her speech, Mark went over a few health and safety announcements before the run commenced. 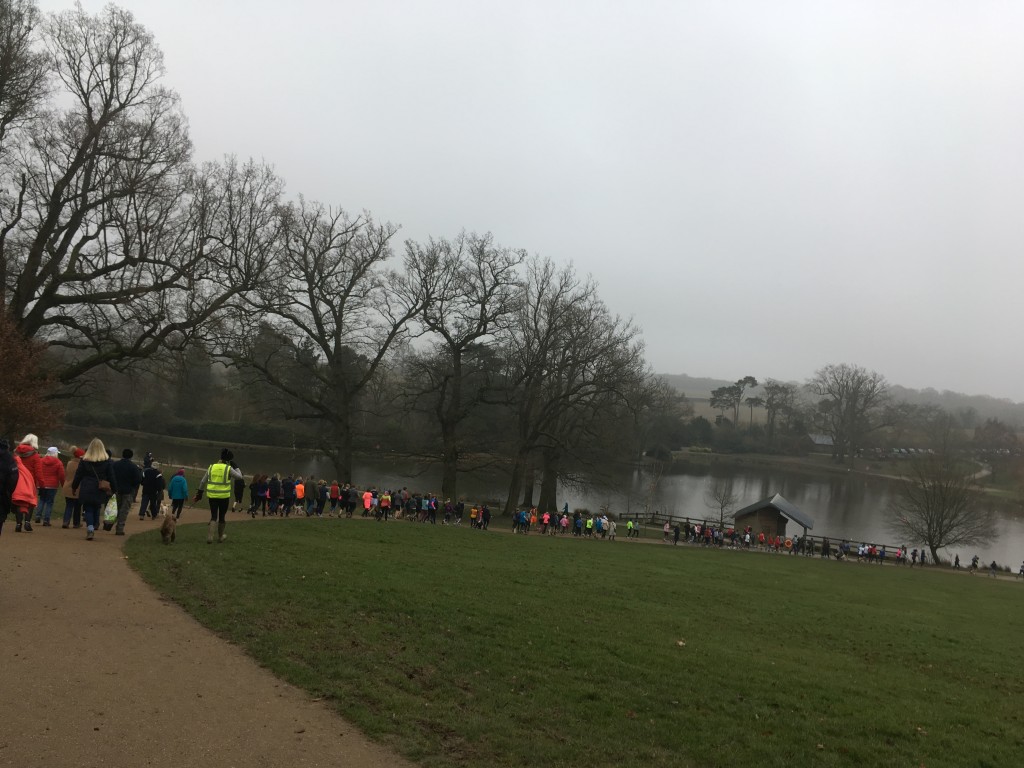 And they’re off! Following Mark’s health and safety announcements, the parkrun commenced!

With the event now in action, I decided to walk around the course to motivate our new 5K Your Way participants. I was very happy to see that 5K Your Way is for all abilities, whether you’re a runner, jogger or walker. After all, it’s about getting out in the fresh air and getting some exercise, not about how fast you are.

I spoke to some people who were walking the course. One of these people was a nurse. They had been walking with some of their patients and said to me: "It was great to get some fresh air, and be out helping their patients get active".

As well as speaking to the amazing 5K Your Way participants, I met one of our parkrun regulars. She told me that “today was very difficult for me, but then I saw Dame Kelly Holmes, who gave me a high five, that really inspired me to finish the run”. 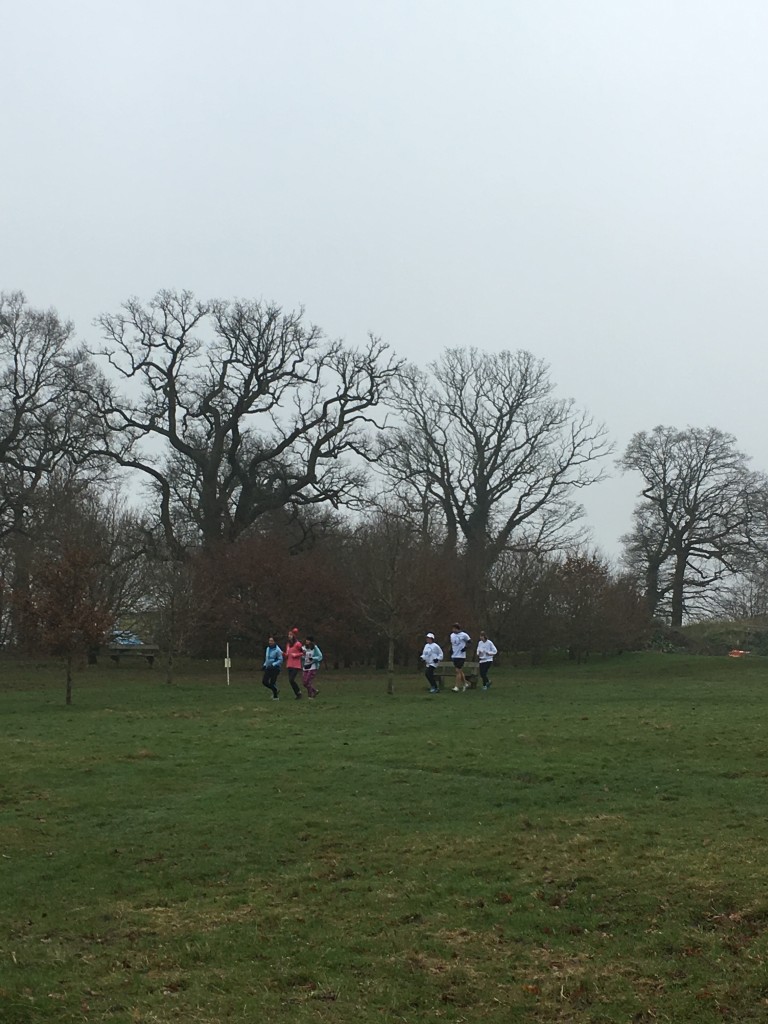 Some of our new 5K Your Way runners, we also had joggers and walkers.


Also after the run, I spoke to the Kent Ambassador for 5K Your Way, Dr Rema Jyothirmayi. I asked her why she decided to bring 5K Your Way to the area. She wanted to encourage her patients living with and beyond cancer to get active. She also told me that the 5K Your Way group planned to meet up on the last Saturday of every month for parkrun! We look forward to welcoming them back in February.

Thank You to Dame Kelly Holmes for inspiring our participants to finish the parkrun today by cheering them on towards the finish line!

RTW parkrun will return next Saturday at 9am.

Celebrating NHS70 in style and what a celebration! At 8.00am  the balloons were being blown, bandages and fake blood for the volunteers was out in anticipation of our celebration and thanks for 70 years of the NHS. As runners started to arrive it was lovely to see so many people who work for the NHS dressed in their uniforms. A big thank you for people working for the NHS!

Looking around beforehand at the early arrivals it seemed that head bandages might be the "go to" choice for appropriately themed clothing - but many other options were soon in evidence. For instance, Francis was fetchingly attired as a midwife. Former ward sister, Rosemary, as tail walker, was well equipped with a stethoscope should any parkrunners require checking out. 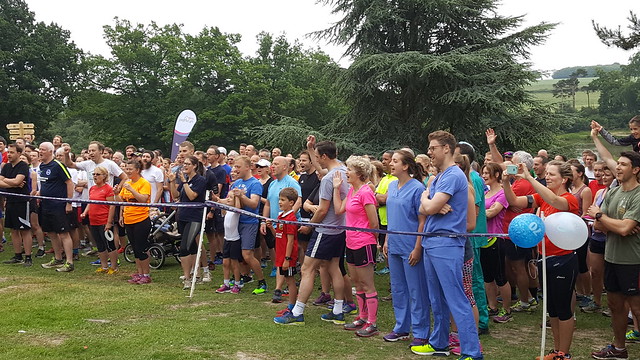 Our #NHS70 celebration run was started by Dame Kelly Holmes, along with the Run Director, aka "Temporary Midwife" Francis, and veteran RTW parkrunner (and genuine paramedic) Mark 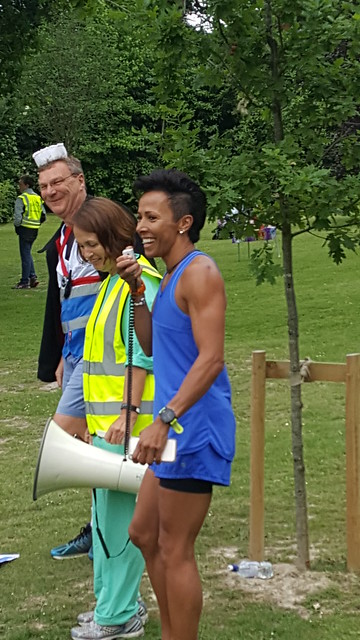 As parkrun hour approached it was nice to see runners nudging, whispering to each other and pointing to a lady in blue who was hereself taking photos. Was it her?! We had the pleasure of welcoming Dame Kelly Holmes who had kindly come along to help us celebrate. Hearing everyone talking after, and seeing the photos all over social media, she made the day even more special.

In welcoming our guest, Dame Kelly, Francis had certainly done his homework the previous night. Not only did he of - course - cover her double Olympic gold medals but he also reeled off an extensive list of all the records she had achieved at various distances - several of which still stood. He pointed to the contribution parkrun initiative could make to the health and well being of so many people. In our own way parkrun could assist the NHS by helping people to keep healthy for as long as possible. Dame Kelly paid tribute to the huge contribution to society made by so many people in the health service. And she talked about the pleasure and achievement to be gained from running - whether we were old or young, fast or slow. She also gave a good plug for JOIN IN JUNE in which she was promoting taking part in physical activity. (You can read about it on her Twitter account @damekellyholmes)

We were contacted during the week by Karen who was coming as a tourist on a visit to Hever Castle and asked to do the Run Report. Her son Alexander kindly volunteered on barcode scanning even if he was the most reluctant 13 year old to have his photo taken with Dame Kelly Holmes!

Run reporter, Karen, starting out on lap 2 and, later, with Dame Kelly Holmes

Volunteers get in on the photos 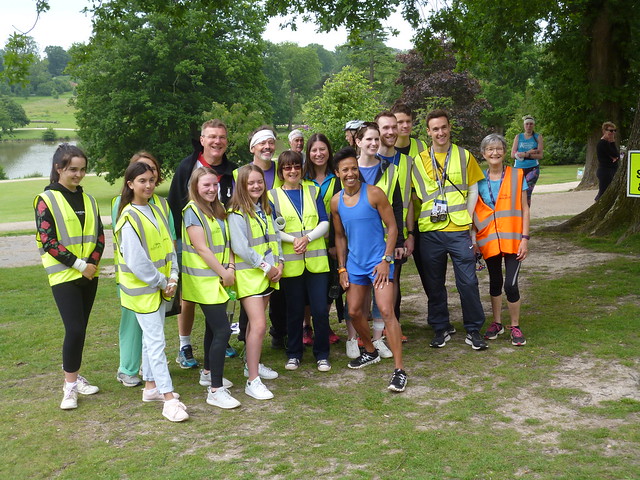 "On turning up at the start line, we found a cheery band of volunteers, who were massing and being briefed as to their duties which lifted our spirits as they do each parkrun morning. The parkrun fairies were kind to us today and provided cooler conditions than of late, which also provided the perfect opportunity to talk to others before we started.

Thank you to Noeline, for the new runner's briefing where new runners were warmly welcomed and introduced to the course layout. What a beautiful course you have too, with 2 looping laps in stunning parkland, which follow the boating lake in the middle and also the wilder cross country fields to the back of the course. These two differing aspects allowing for a contrasting feel to the course, added to the unfolding weather that apparently alters the course considerably. Indeed although rock solid today, I have heard that the back can get quite muddy and water logged.

Today, visitors from Bedfont Lakes, Aylesbury and Havant and as far away as Cardiff were using Royal Tunbridge Wells as their tourist venue.

Francis Eames, our Run Director for the event, gave big thank you as always to the volunteers who gave up their time to ensure that we were able to run this morning. There were certainly a cheery band of marshals out on the course, all supporting by giving encouragement and clapping. Don't forget if you are unable to run, have a race coming up or are just generally a good egg, then volunteering is a great way to give back to the parkrun community. Head over to the Royal Tunbridge Wells parkrun webpage for details of the next few weeks roster and sign up for a position that suits you- you get to wear a hi- vis jacket! -what more incentive do you want?"

Stylish running outfits - could these catch on at parkrun?

"First timers, as mentioned above, are always warmly welcomed and are on the start of their parkrun journey and working towards their first milestones. The trick is when working towards your milestones is #DFYB- Don't Forget Your Barcode! If you were listed as unknown runners this morning. That's one run less to count towards those milestone trees. Milestones this morning announced were for joining the Junior 10 Club were Callum Benson and Elena Currah and also joining the 100 club were Kirsty Mauritz and Sandra Jones. She is a tourist from Cardiff but was with us volunteering when we started 4 years ago. That's the great thing about parkrun isn't it, that each person has their own individual journey to talk and share about. Especially pertinent though to also remember to hand in your finish token, parkrun needs them for next week as they unfortunately are not a souvenir, medal or indeed your own version of Bingo!"

At today's parkrun there were 278 parkrunners and the event was made possible by 28 volunteers. These were:

A small selection of our #NHS70 photos - (Have a look on our website for the photos by Joe Watts, Richard Woodfield and Zena Hassell). Very likely you are in one of them. 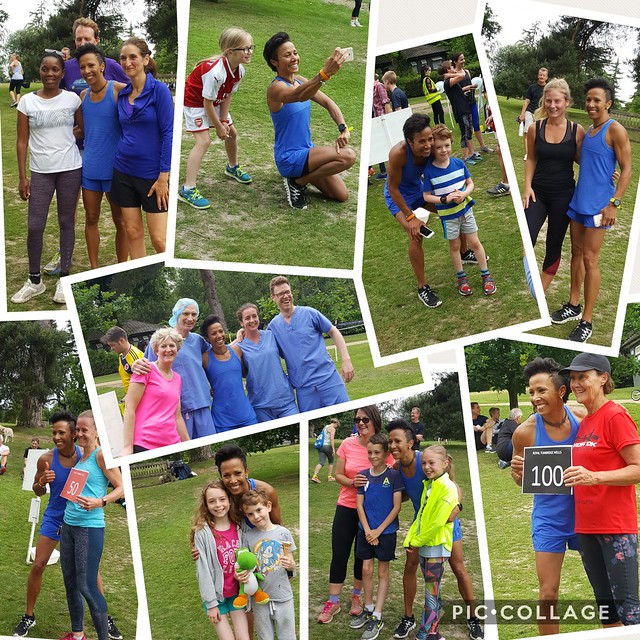 PLEASE REMEMBER THE NEXT PARKRUN ON 16th JUNE IS CANCELLED DUE TO ANOTHER EVENT IN THE PARK. BECOME A TOURIST AND WE LOOK FORWARD TO SEEING YOU ON 23RD WHEN WE ARE SHORT OF VOLUNTEERS.

Last week's magnificent take-over of the Royal Tunbridge Wells parkrun by the Tunbridge Wells Harriers, with a record 230 runners, was a hard act to follow, but this week's event gave it a run for its money, with 208 runners!

Dunorlan Park is just emerging from Spring into Summer, with abundant foliage, flowers and wildlife. The weather was mild and overcast but with a slight breeze – ideal running conditions in my opinion. The Quagmire seems to have breathed its last (until next year) but the park is not the park without a few hazards to catch the unwary. For some unknown, ornithological reason it is the time of year when the ducks like to poo on the paths, plus there were a few overhanging branches. But nothing really to detract from a scene set for some good running …

With the pre-run brief over, it was 3-2-1 and off down the slope!  Optimum conditions underfoot and a fine, cooling breeze meant that there were no fewer than 59 new Personal Bests scattered through different age groups and times ! Congratulations !

First male finisher was Pete WOODWARD of Crowborough Runners. He had set off for the Bedgebury Pinetum parkrun but upon arrival, found it had been cancelled. So-o-o …. he drove to Dunorlan Park, started the RTW parkrun late but still achieved an 18:00 time!  Well done Pete!

Finally, we must not overlook our two Junior first finishers - Grace FLEMING (21:56) and William EDWARDS (22:04).  Well done, Grace and William!

And, well done to all the other 204 runners, young and not so young, who made it to the finish line in fine style at our second-highest attended event.

New volunteers are always welcome. If you would like to help, find out more on our volunteering page and get in touch by email to royaltunbridgewellshelpers@parkrun.com !

Joe WATTS took this week's action-packed photos and you will find more on our Flickr page. If you took some too, why not share them by uploading them here?

Full results of this week's event with all the statistics, and a complete event history can be found on the Royal Tunbridge Wells parkrun results page.

This week's run report was written by David HARMAN, but if you would like to write a future run report, please e-mail royaltunbridgewellshelpers@parkrun.com