A wonderful autumn morning with the mist dispersing to reveal brilliant sunshine.... today was certainly a big contrast to the battering we took last week from blustery gales and squally rain. Run Director, Mark, announced in the pre-run brief that the parkrun of today's 40th finisher would be the 50,000th to be completed on our course. It turned out that the honour fell to Dan (pictured) and he was awarded a special star to commemorate the occasion. 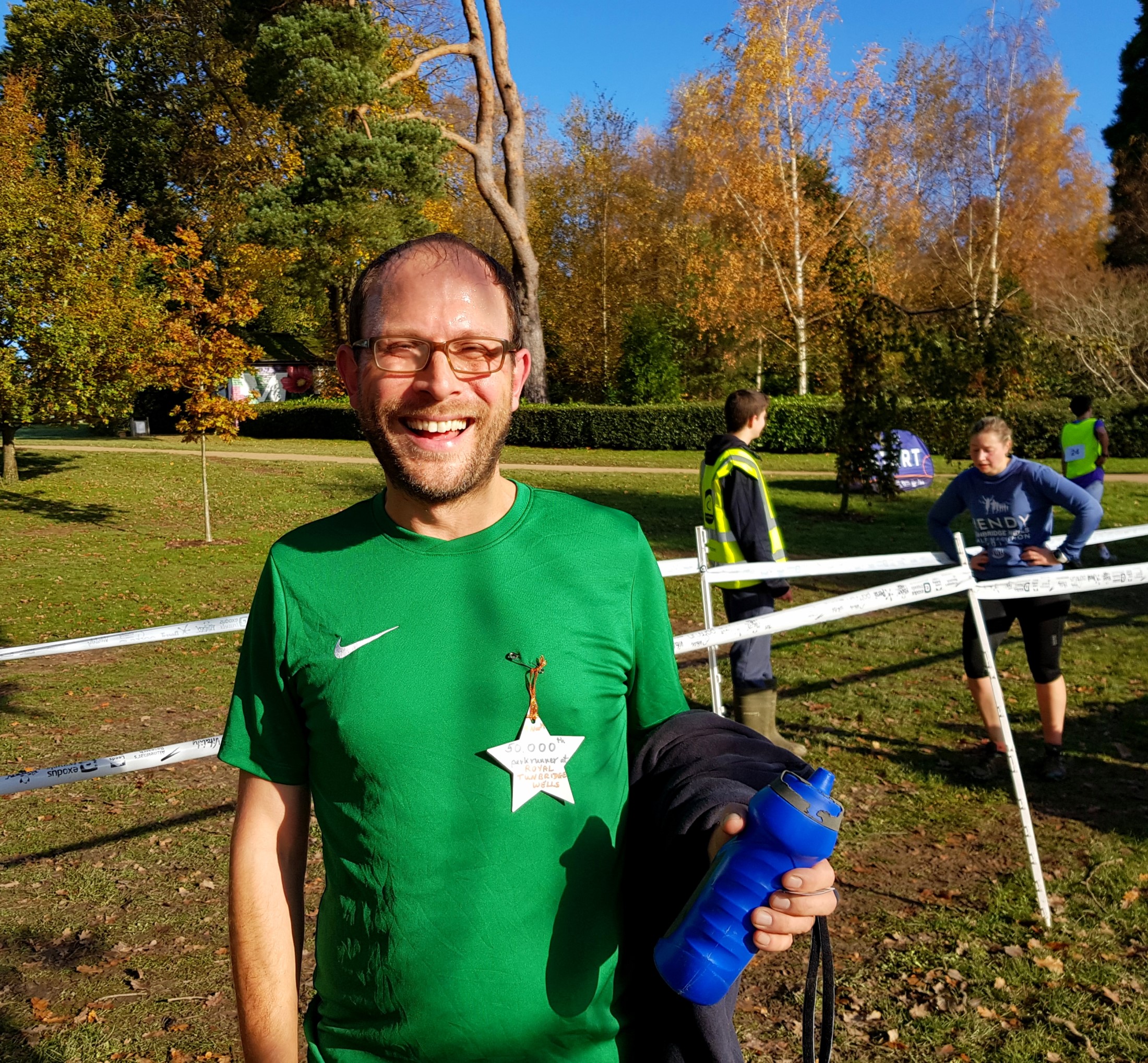 It was a pacer day, and the pacer hi vis vests lined up ready for action always make a fine sight for parkrun early arrivals. There was plenty of squelchy ground to be found after the autumn rains and so it was not surprising that collectively we didn't chalk up a vast number of personal best times. But 20 PBs is still a more than respectable total for this time of year, so well done all. 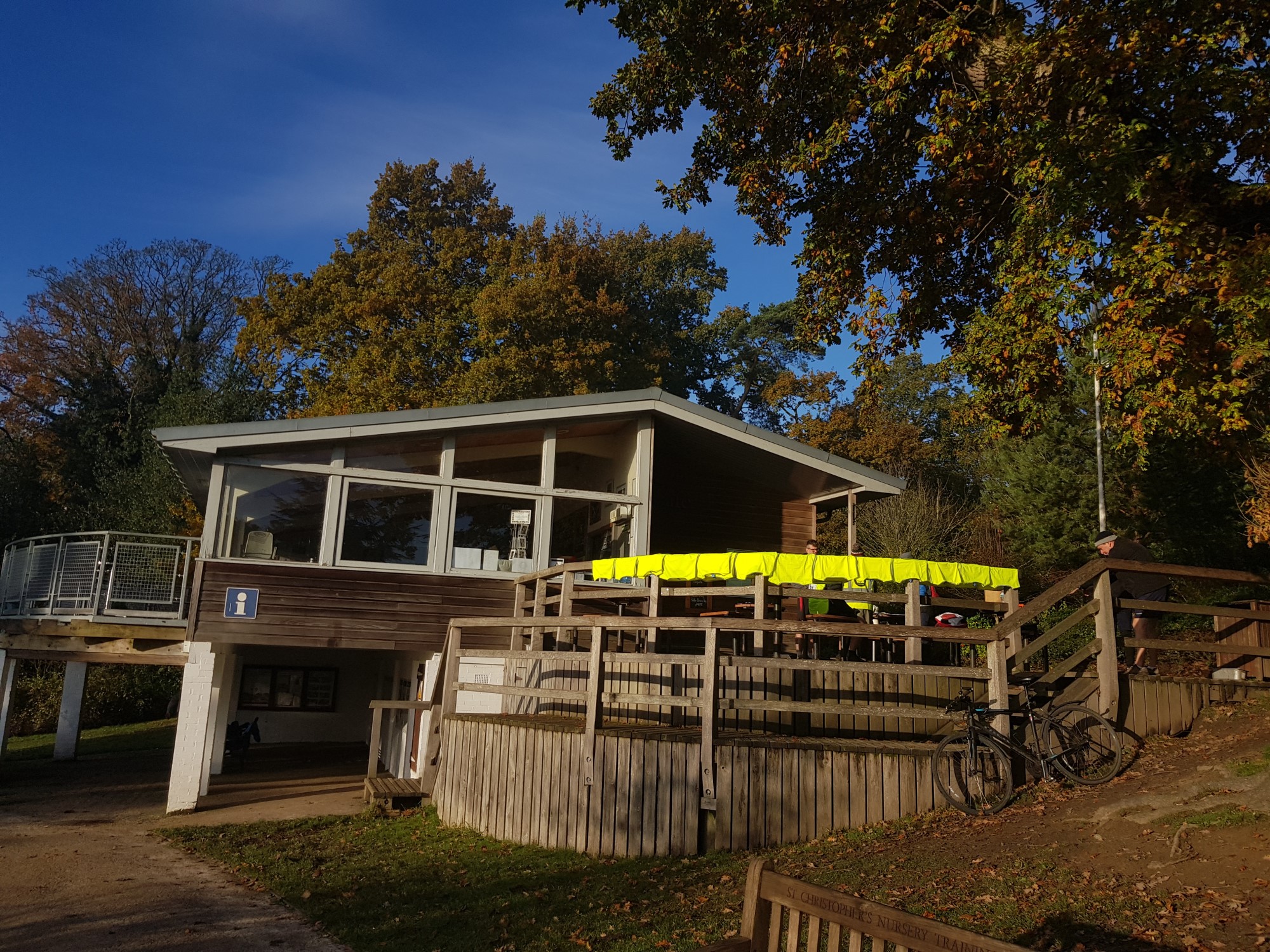 Many thanks to all today's 42 volunteers. It was also excellent to see the number of parkrunners bounce back up to 238 after several weeks of lower numbers (probably not unconnected to the rugby World Cup and last week's very unpleasant weather). Here's a few more pictures from the morning's event. 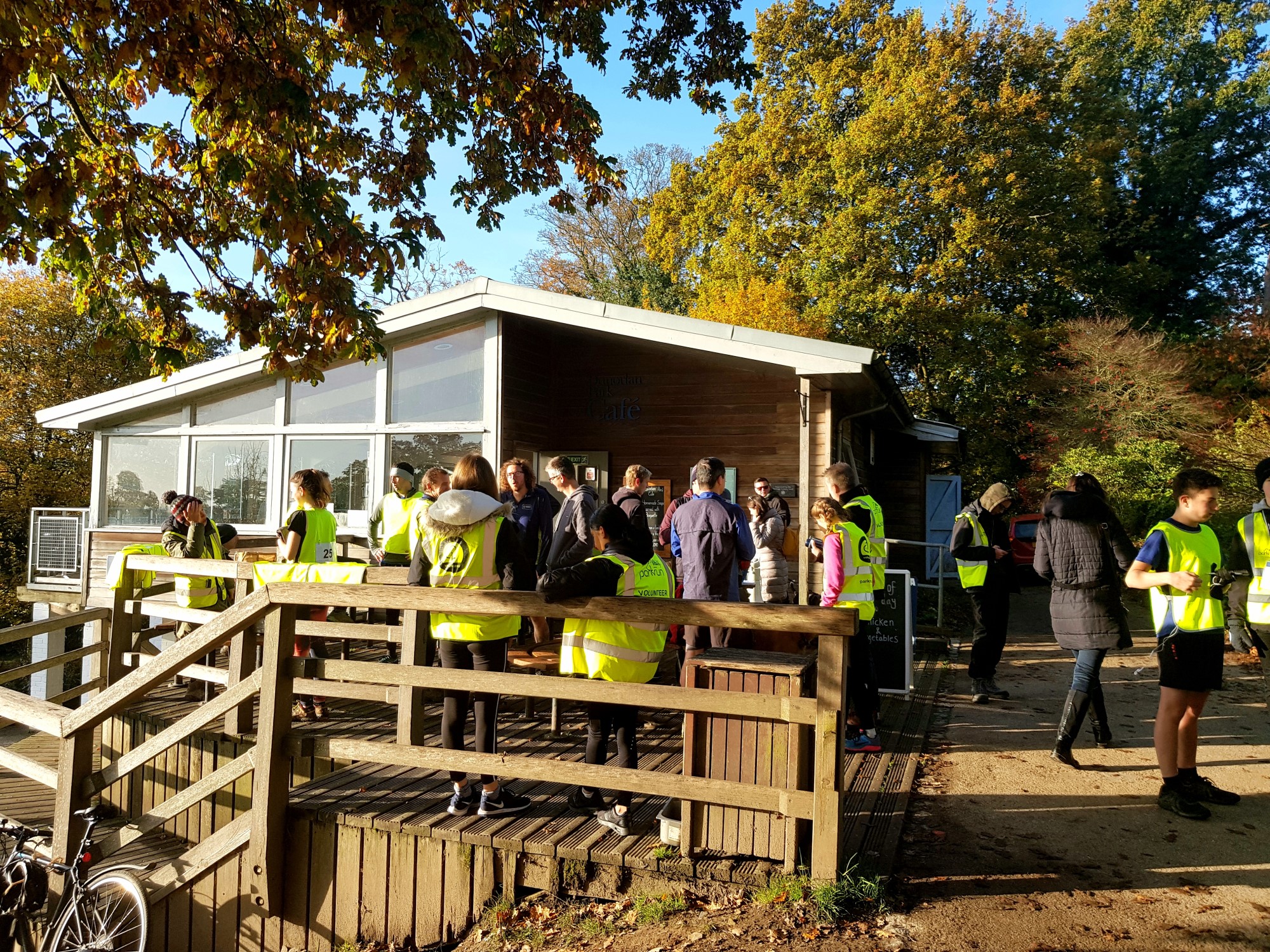 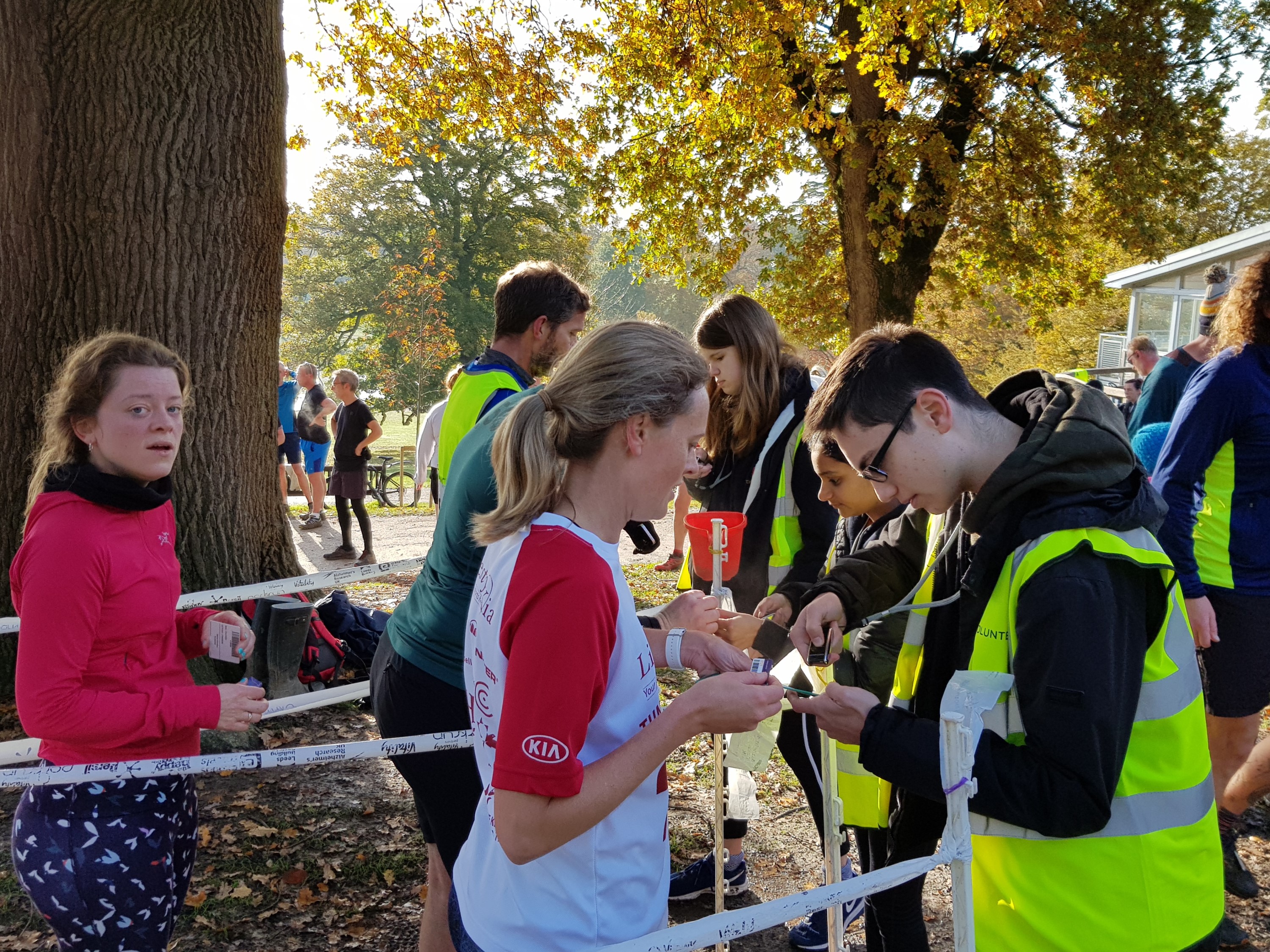 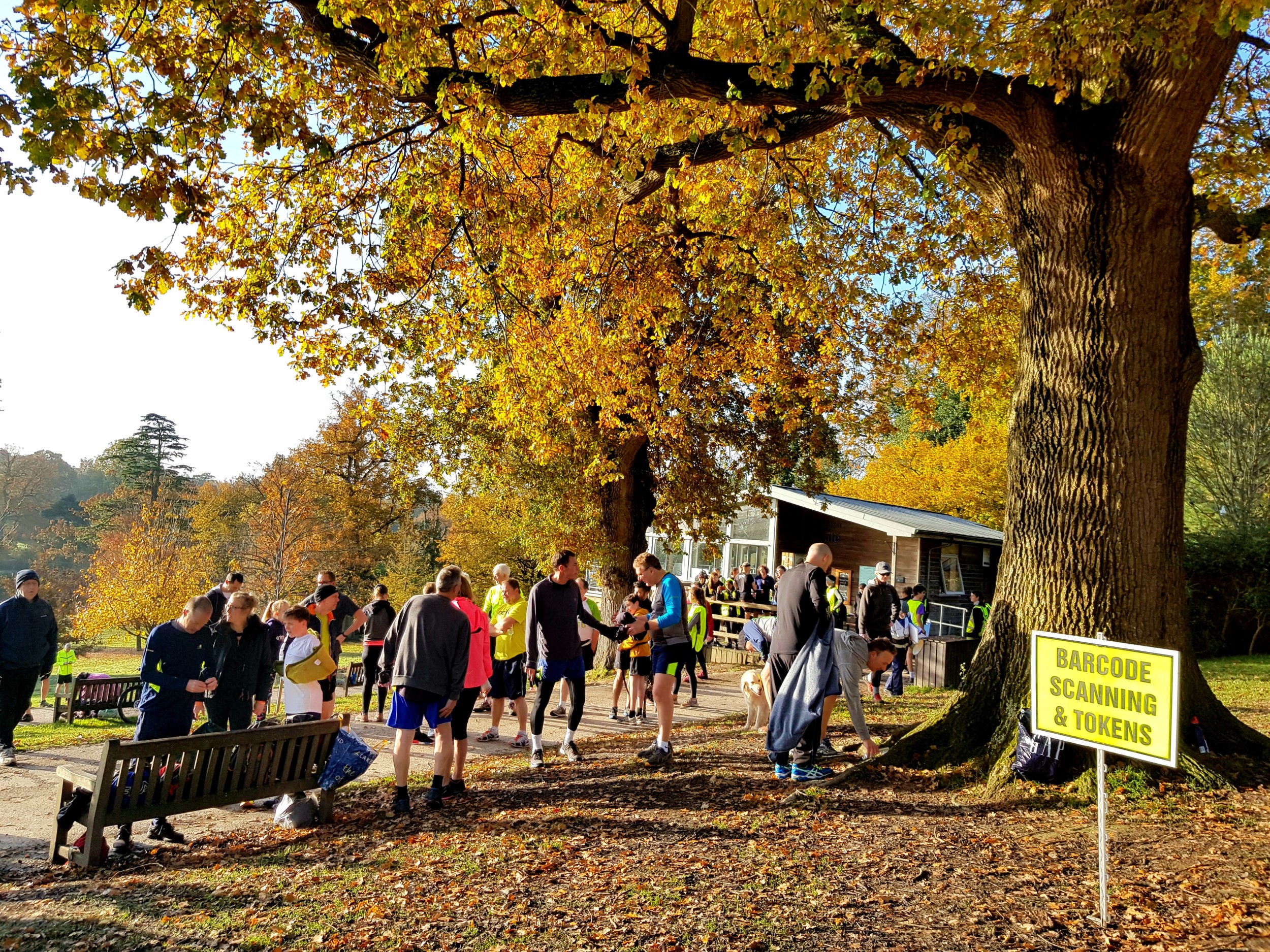 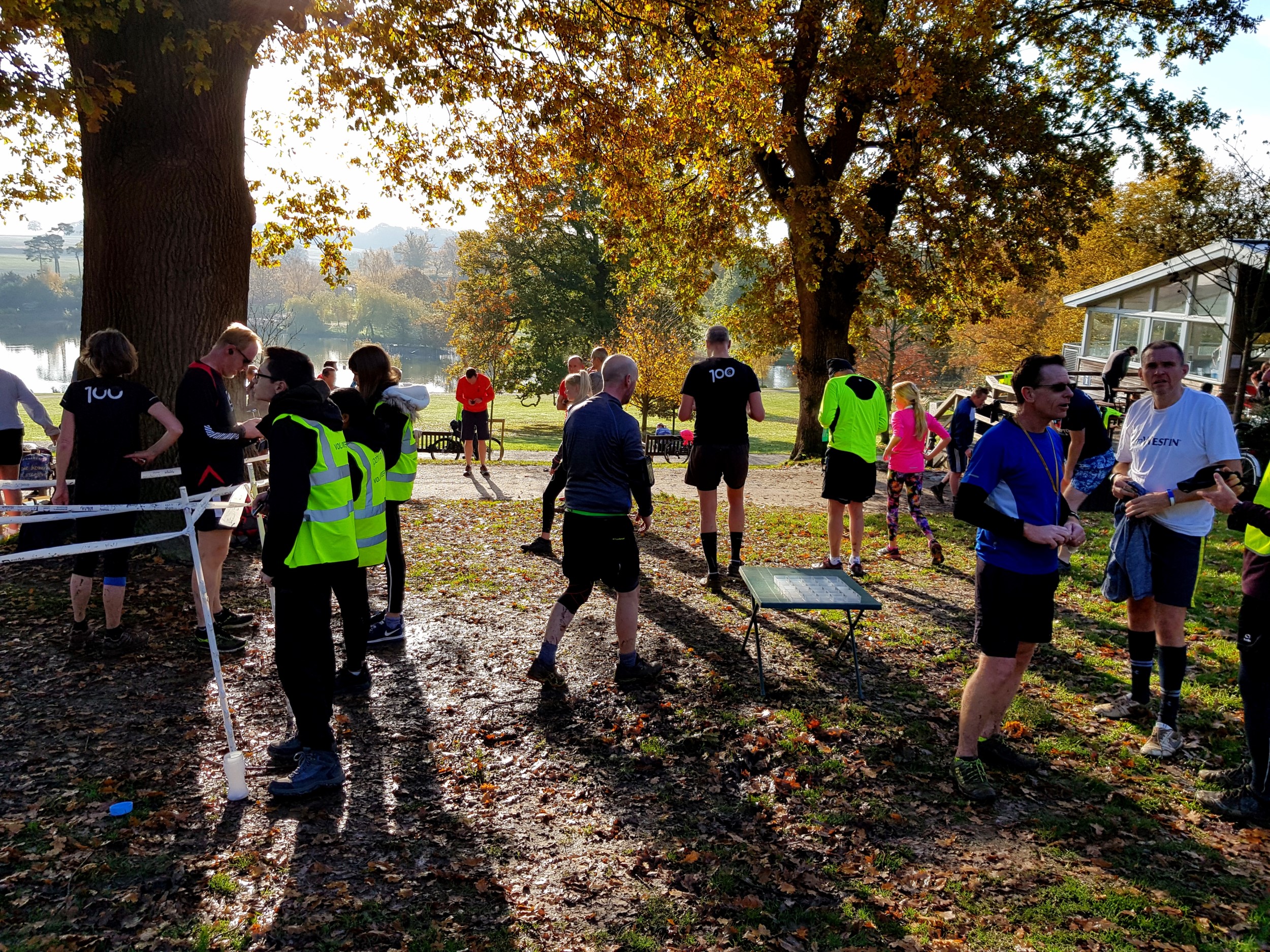 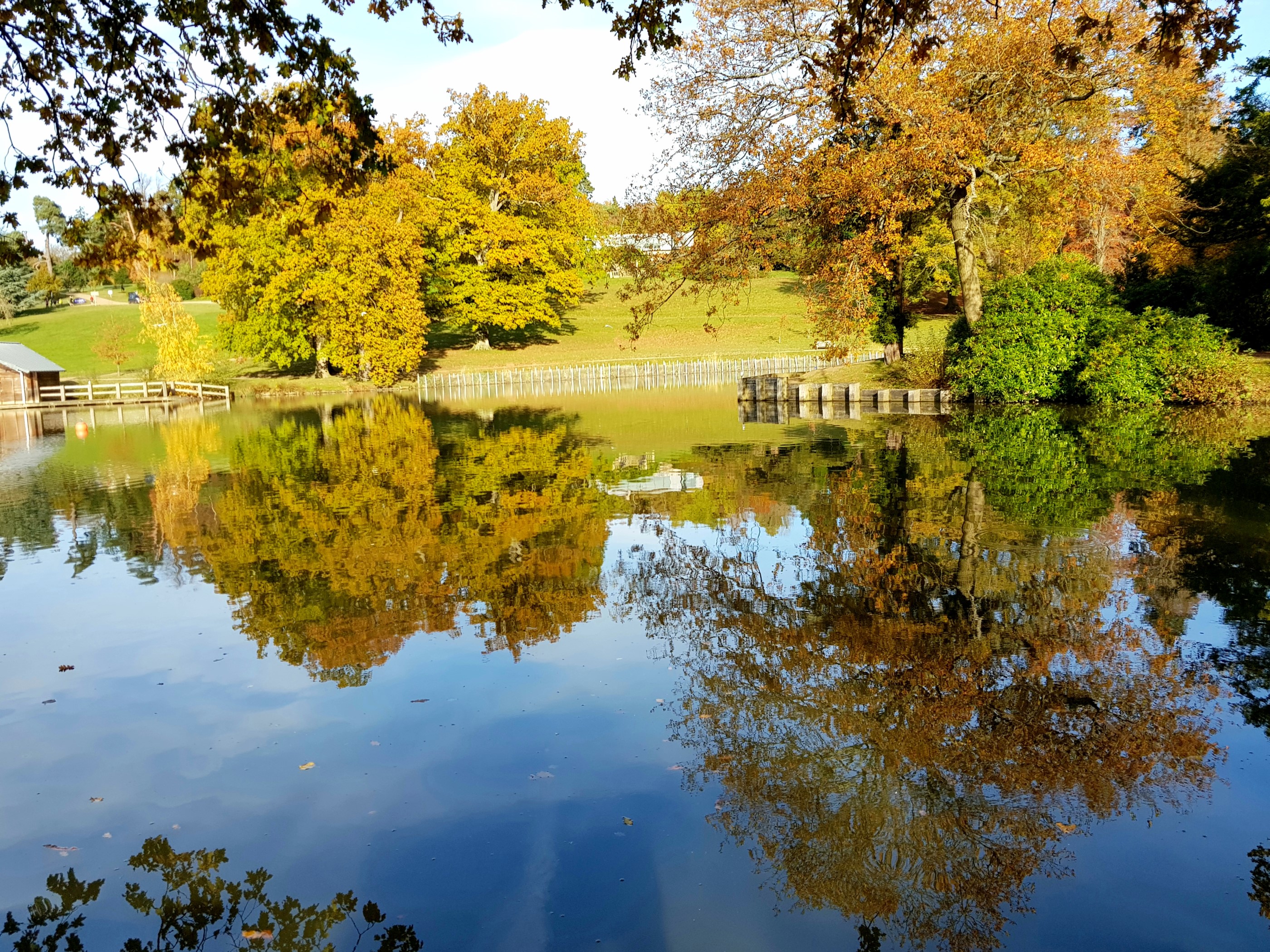 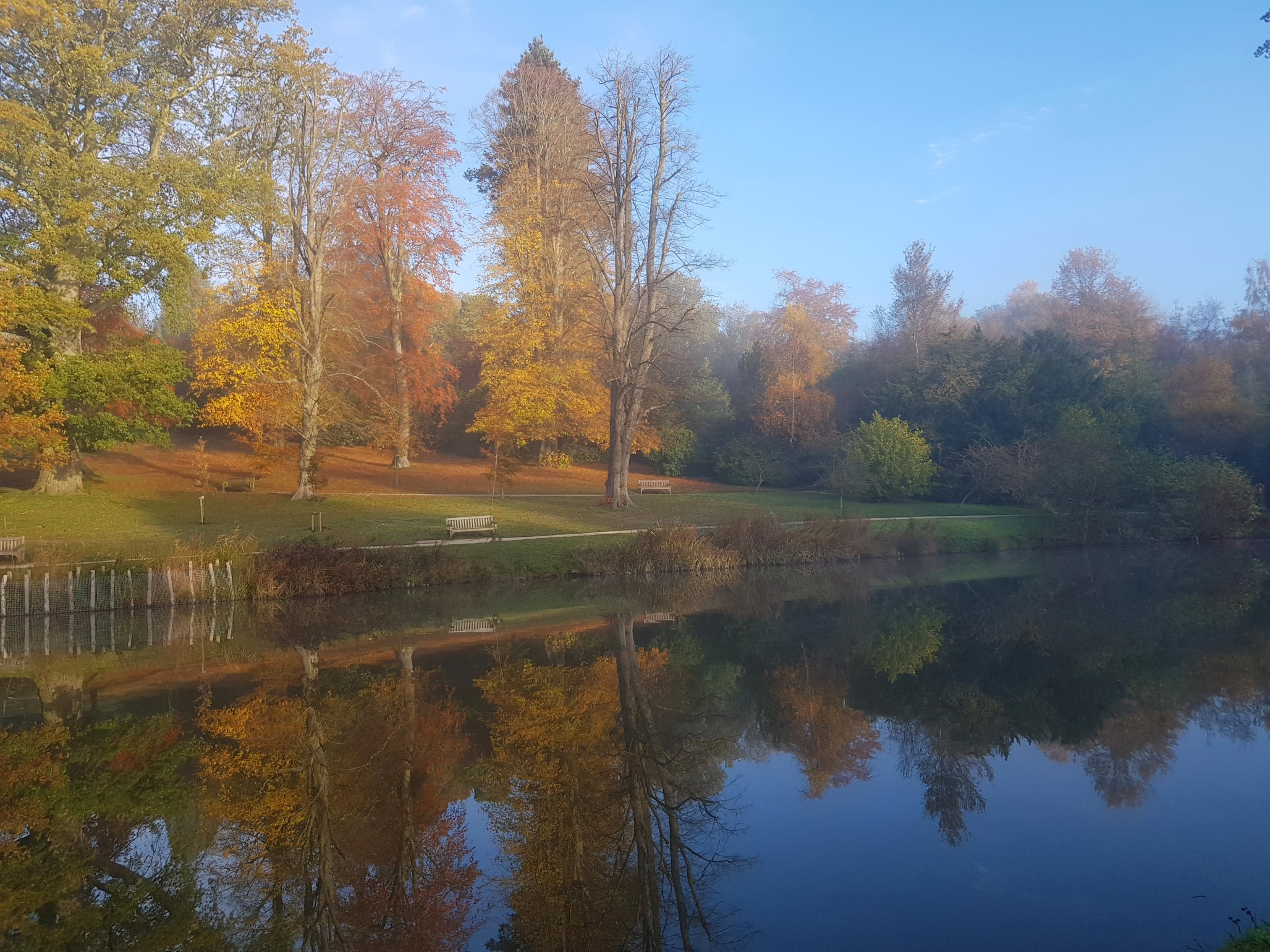 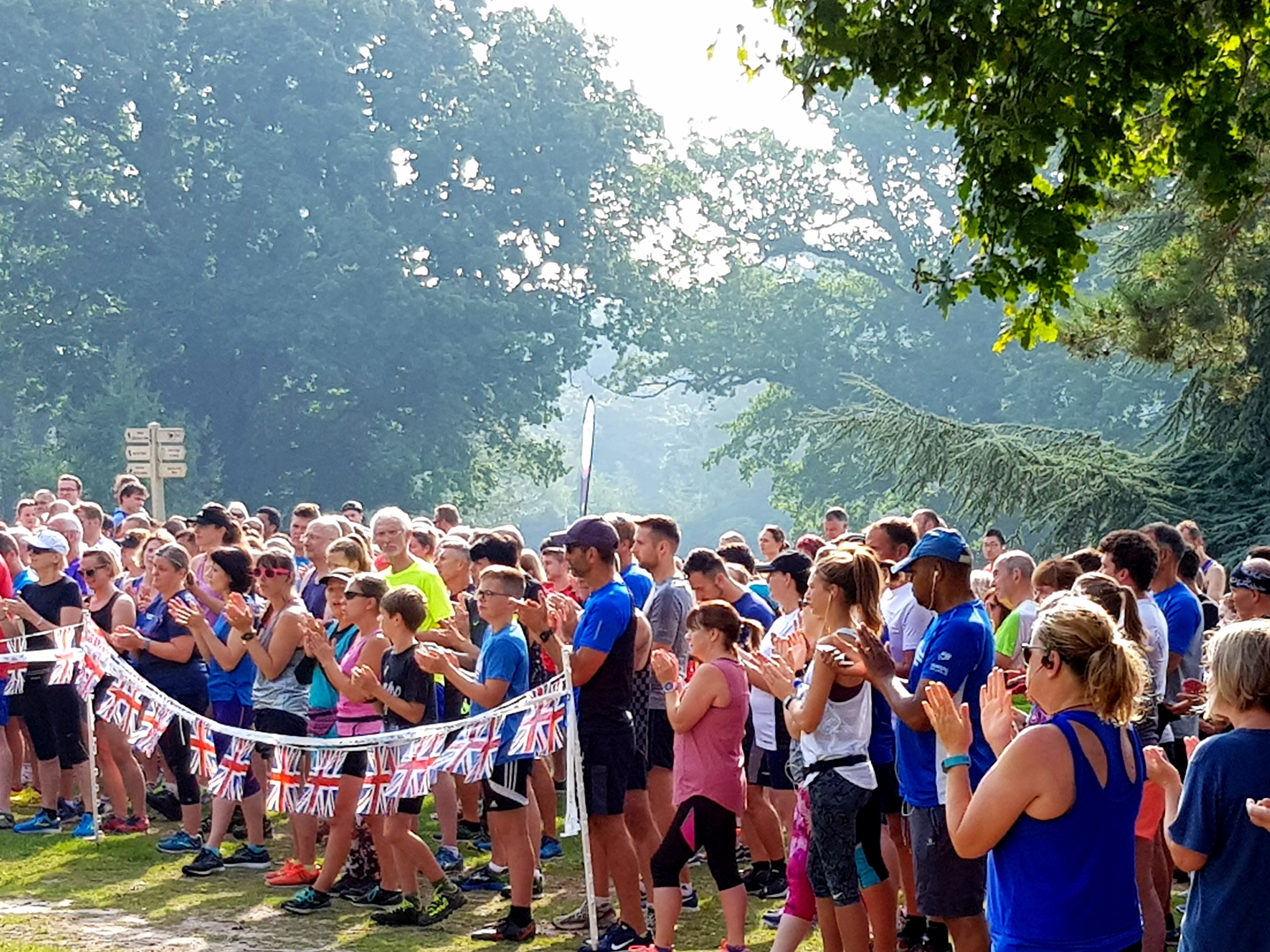 The morning's event was a mixture of joy and sadness as we held a minute's applause to celebrate the memory of our good friend, fellow parkrunner and volunteer Steve Barnfield. Run Director Colin led the applause, with friends and family participating, including a group from the Tunbridge Wells Harriers, Steve's running club.

Pacers, volunteers and parkrunners join in the applause 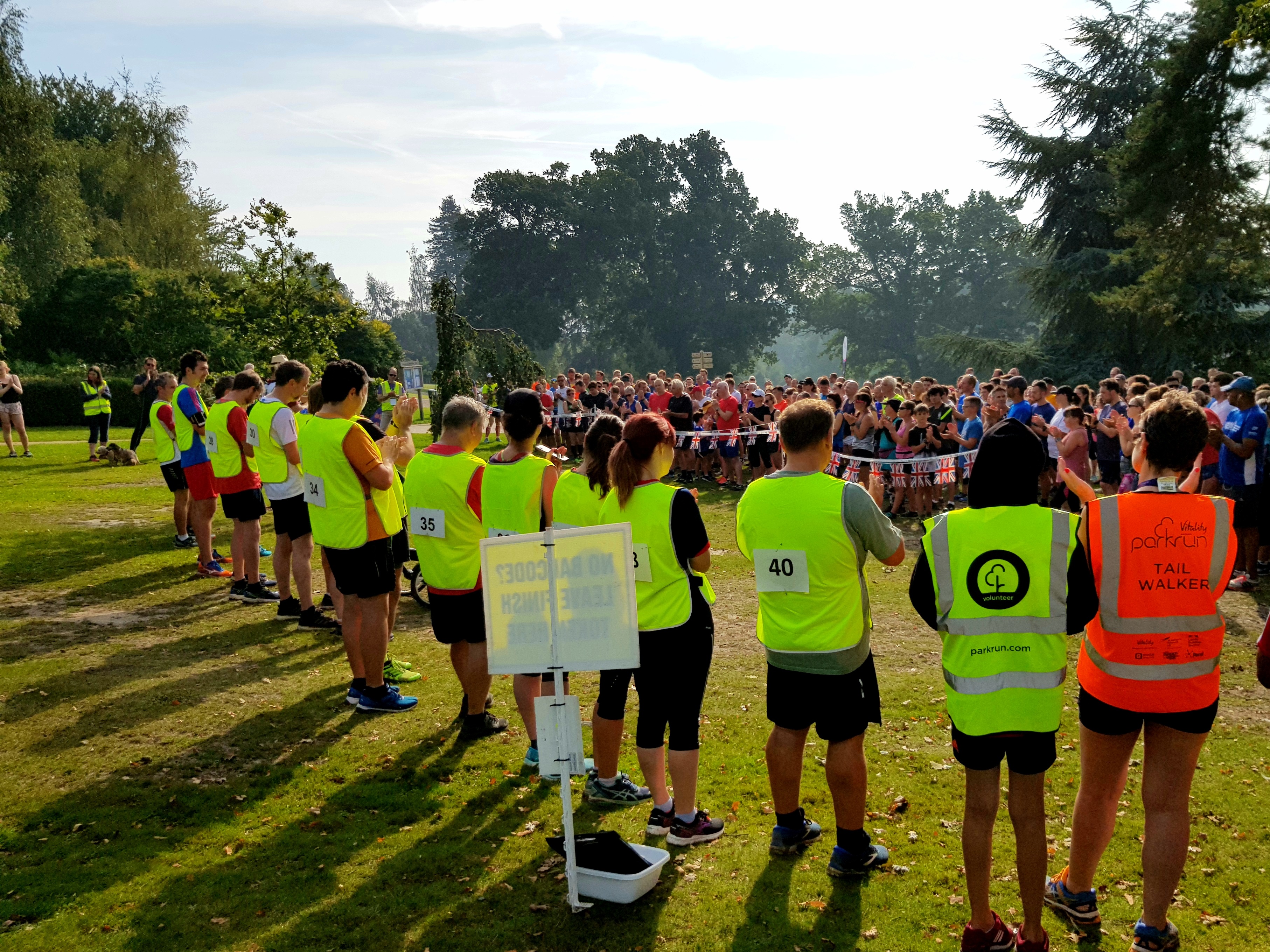 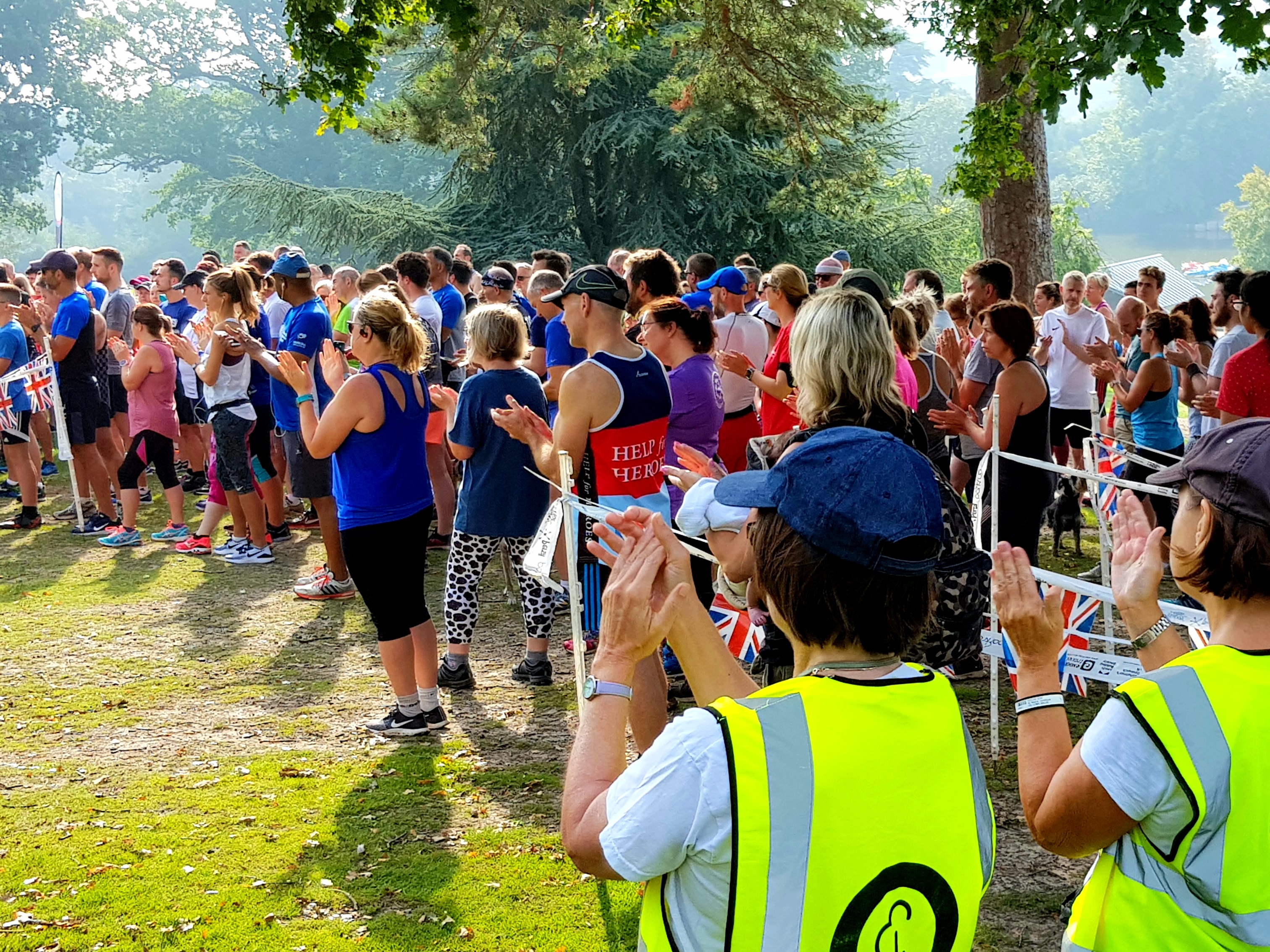 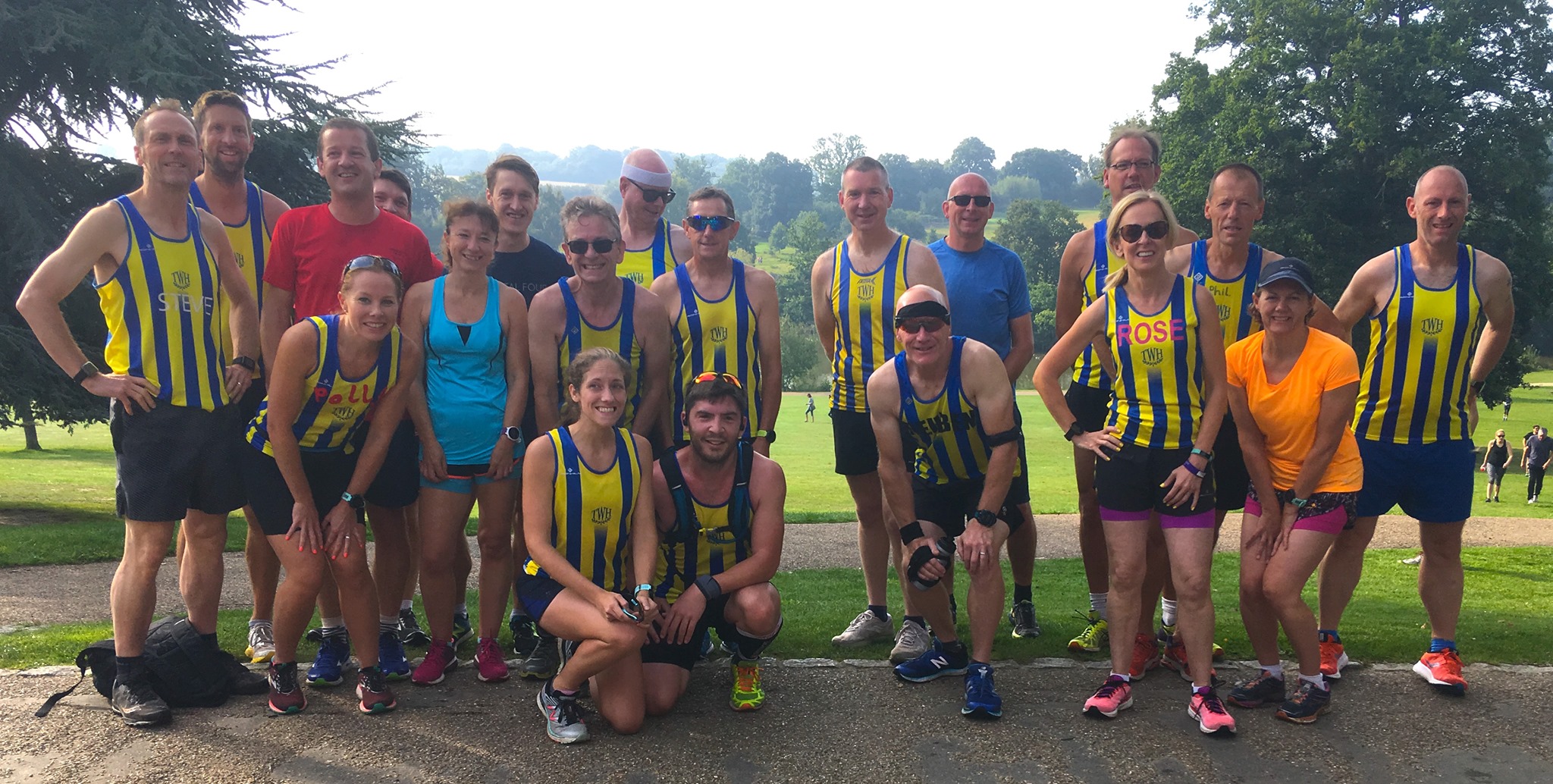 As today was the Nation's Biggest Sports Day we put on an event to be proud of, celebrating sport with a large roster of pacers. This must surely have had an impact on the impressive 42 PBs in a field of 312 - well done all!

We also had 34 first timers and a superb total of 52 volunteers. All of our participants and helpers make parkrun the special event it is, so thank you all.

Steve always appreciated interesting or encouraging statistics - and so it was fitting that this tribute event saw our highest ever parkrun attendance in August, and also our second highest ever total of volunteers. Steve himself had, remarkably, volunteered at no less than 219 out of 260 events.

It was also lovely to see Dame Kelly Holmes put in an appearance, with many of us grateful for her encouragement as she ran back around the course after completing her 5k. 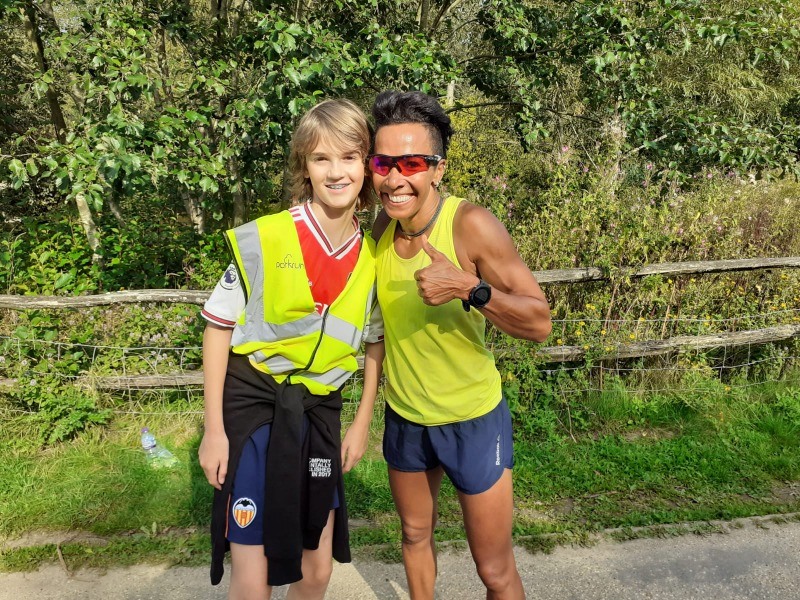 After the parkrun, very welcome food was provided by Sofia's Columbian Kitchen 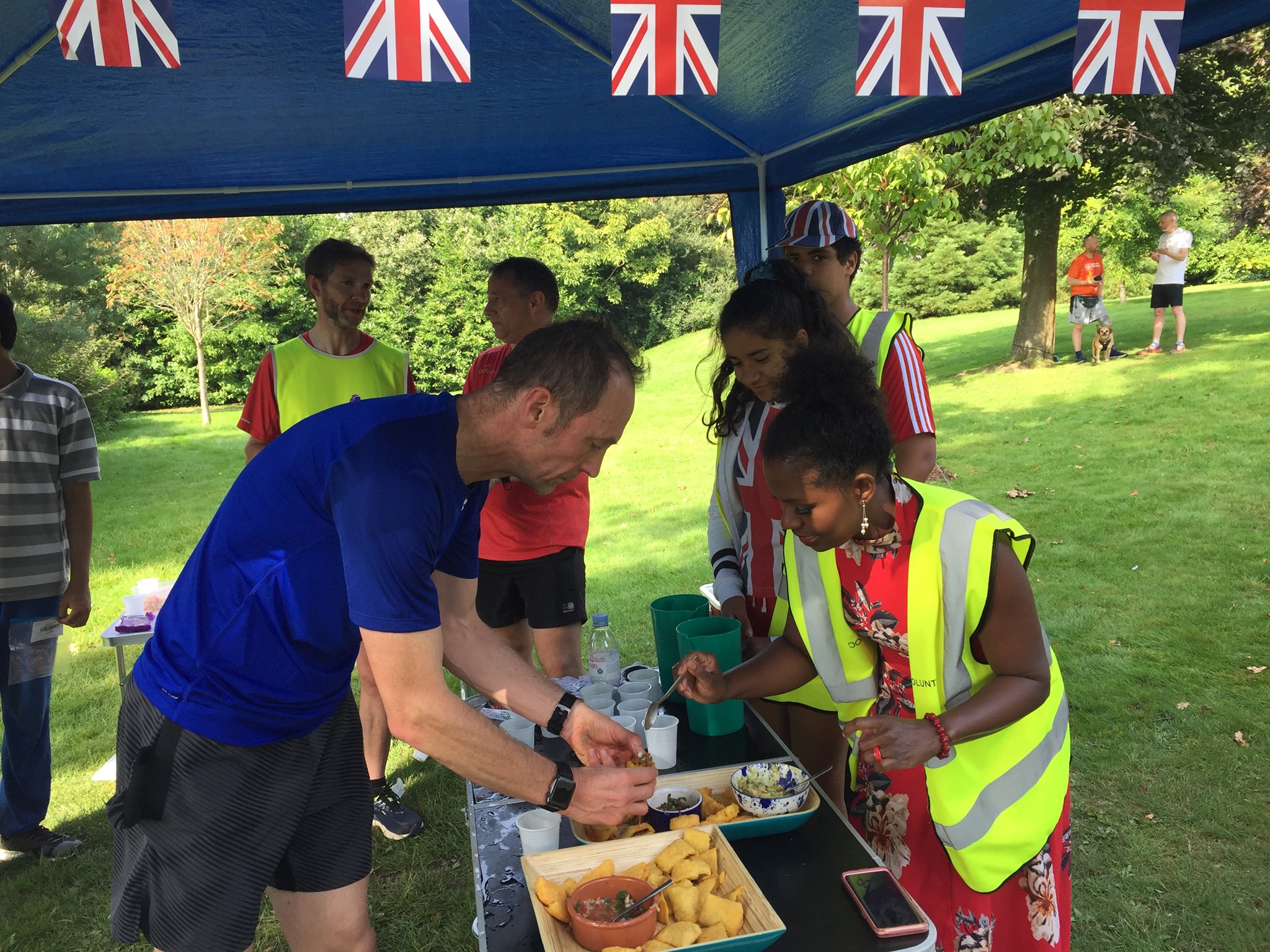 We conclude with a few pictures from our archives showing Steve in parkrun action.

Steve, as pacer, running with his son David 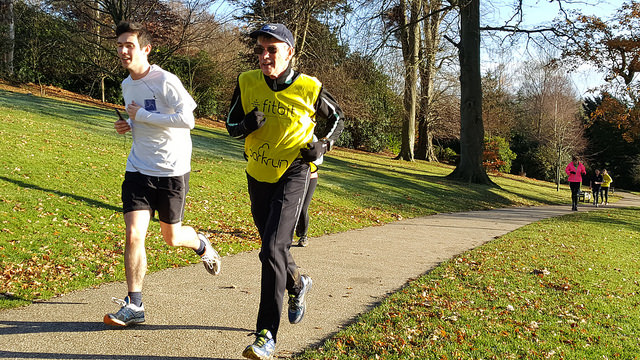 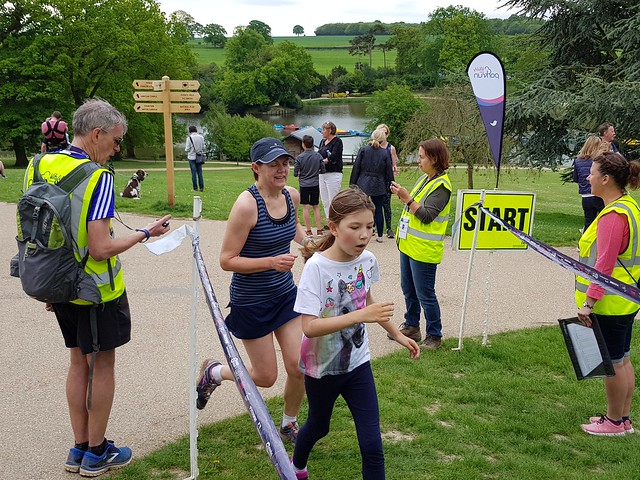 Results processing - a role which Steve performed well over 100 times 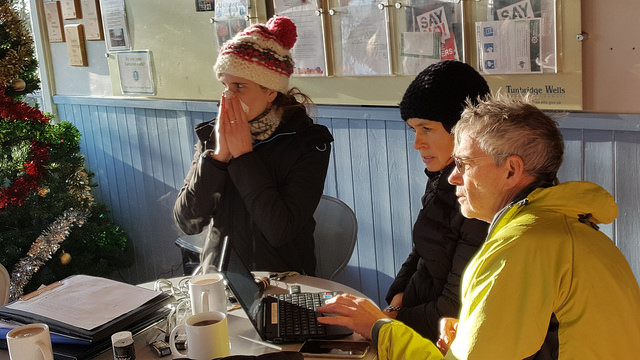 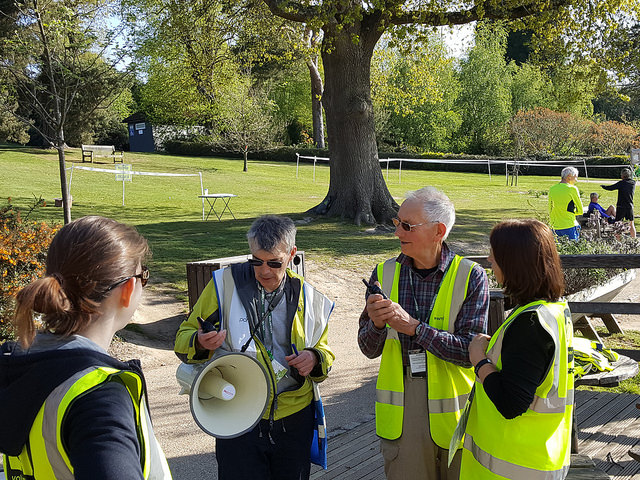 Thank you, Steve, for all your service to parkrun 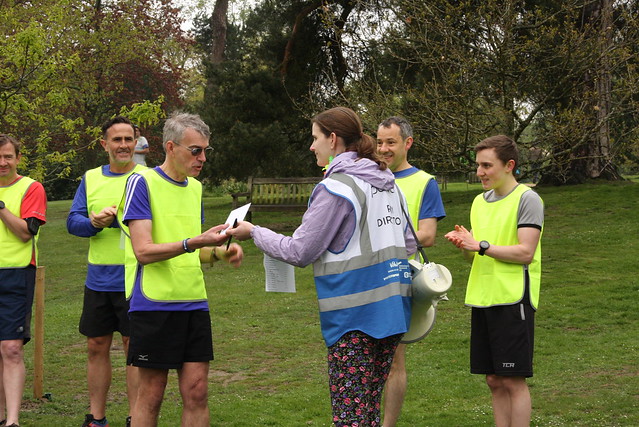 Heavy rain on several days during the preceding week meant that last week's tentative improvement in ground conditions were nullified - and once again we were back to swamp like conditions. "Probably the wettest muddiest RTW parkrun ever" and "I’m a swimming teacher by 'trade' so I’m confident of a top 10 finish for the 1st time." Nevertheless, 168 hardy parkrunners and 30 volunteers braved the conditions and were rewarded with at least some modest periods of sunshine.

It was one of our regular pacer days. It's fair to say, tho, that in these conditions the chances of bagging a personal best time for our course were not very high unless perhaps you had only previously run a few times on our course. But very well done to the six parkrunners who did achieve PBs.

Afterwards we were treated to some welcome light refreshments. Thank you to those who provided them - I certainly consumed several mint chocolates, "several" being a fairly elastic concept in my book.

A tranquil scene before parkrun - although this was the path rather than the "official" lake! (RW) 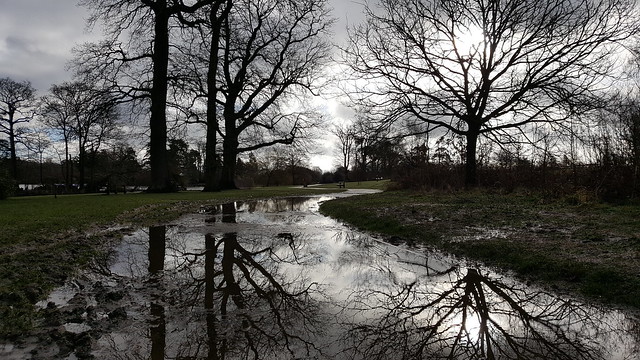 Joe - on his 57th occasion in the role of run director

We all know that there are plenty of fascinating parkrun statistics. But at RTW parkrun we also do other branches of parkrun mathematics - for instance geometry. Here - as every week - parkrunners "describe an arc" (pic RW) 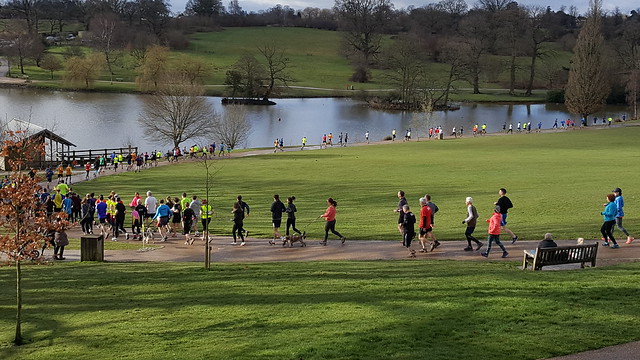 Back to the statistics. In March we passed several landmarks

* 5,000 different parkrunners have now parkrun at our event
* 30,000 parkruns have been run, jogged or walked at our event, which means 150,000 kilometres have been parkrun here.

However, March remains the only month of the year in which we've never had 200+ parkrunners at an event. It's fair to say that the weather really has not been on our side.

A challenging day for the pacers - how much time do you need in hand to allow for the slippery, slidey parts later in the course? 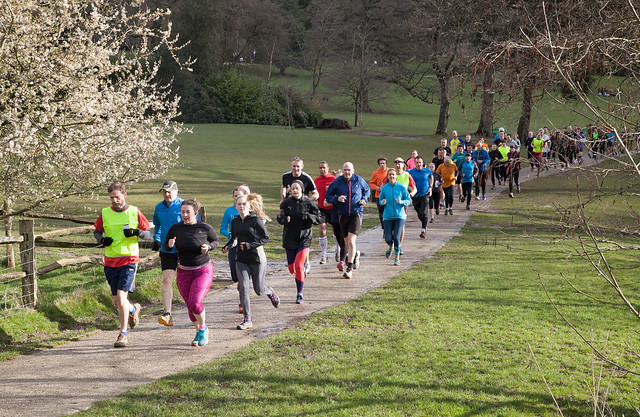 Waving or balancing? Not always easy to tell on the slippery sections!

Youthful parkrunners switch on the burners towards the end of the lap ...

It's smiles all round from the volunteers ...

Three new members have recently joined the 25 volunteer club - Robin Barwick, Huw Jones and Yolanda Witt. Well done all three! And parkrun veteran and regular, John Dyson, has joined the 100 runs club. Another John (John Isaacs) who is also in the MV 75- 79 category was a parkrun tourist with us today, running in his 301st event.

Age gradings
The age grading percentages show how fast your times are in relation to the world record for your age and gender. It was interesting to see that the top thirteen age grade percentages this week were all achieved by parkrunners either aged 40 and over or aged 14 and under. Which could suggest that (given reasonable health) it may be more feasible for us ordinary runners to hang on to much of whatever pace we had for longer - into middle and even older age - than it is for elite athletes. Anyway, that's what I'm hoping! 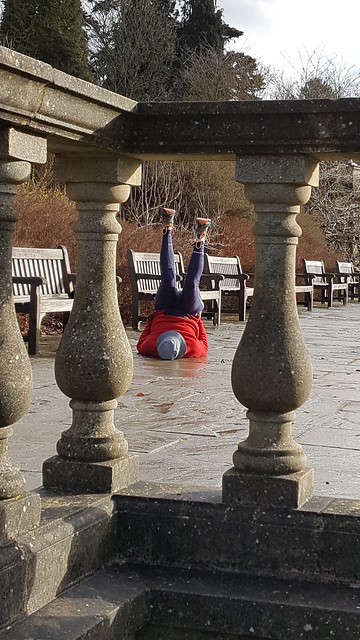 Let us know how you got on at our event on social media, where you can also keep up to date with the latest news - follow us on Twitter or like our page on Facebook.

This week's volunteers were: