Travelling from Nottingham for a day out in Manchester is no big deal, but it is when you want to start your day off with a parkrun. It meant leaving on a train at 05:30 in the morning, and with Storm Dennis forecast to hit us all hard, the prospect of running a parkrun at all, looked doubtful. It was a case of keeping our options open. My son is on 44 runs, and with his 50th parkrun looming, we needed to run, to keep on target for his planned parkrun party. 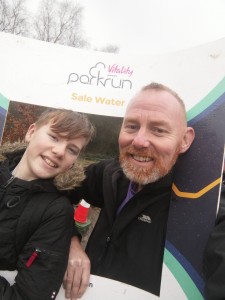 First option was Cheadle Hulme, which very rarely cancels, but anything was possible. If we headed for there and it was cancelled, with no car, there wasn’t much scope for anything nearer. Therefore we stayed on the train to Manchester Piccadilly, where we had a few more parkrun options.

The choices were narrowed down to South Manchester and Alexandra parkruns, but the best options for easier tram travel were for Stretford, Wythenshawe or Sale Water Park. Luckily Sale Water Park were quick to announce they were on, and with only a 400m walk from the tram stop, that’s where we headed.

My wife doesn’t understand the need for a parkrun fix, she thinks I’m mad, especially when the weather is forecast for Gale Force winds and rain. Yes, it was wet, yes it was a windy, and yes it was muddy. Sale Water had it all, but the weather didn’t deter 199 brave or crazy souls from running or walking the course,

None of which would’ve been possible without the help of the 19 volunteers, who stood out in such dire conditions to give us all the chance to run, supporting everybody as we went by……  Lisa was at The Helm. She did an amazing job with her army of volunteers. Without them, there’d be no event. There are various roles, all of which are easy to do, so if you’re thinking of taking a well earned rest, recovering from injury, or just fancy giving it a try. Mention it next time you’re down, or email salewaterhelpers@parkrun.com 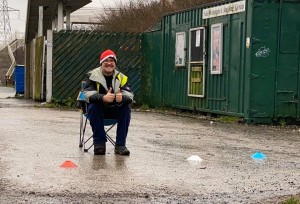 You’ll be shown the ropes. All the roles are rewarding and relatively easy. It would also free up a regular volunteer, and may give them a chance to run themselves.

The course was slightly tricky underfoot with unexpected cobbles, bricks and rubble strewn along the towpath. So, if you’re not watching where you’re going, there is potential to do yourself some ankle damage. However, it was a nice flat, out and back route along the River Mersey, which I’d imagine would look totally different on a fine day.

I almost fell on the way back because somebody leaving the canal towpath on the way out, decided to run up the right hand side into everybody coming back. I skied down the muddy bank with the guy behind almost crashing into me, luckily we both stayed upright, or it might’ve been messy - literally

Out of the 199 runners. There were 50 First Timers, 7 of which were running a parkrun for their very first time ever. Welcome to the parkrun community……your Saturdays will never be the same again. Considering the weather, it was amazing that 26 people achieved new PBs.

There were no significant milestones, so it is worth mentioning Tim APPLETON for being the parkrunner with the most experience amongst the field, having clocked up his 281st parkrun today.

Well done to everyone this week. Lets hope that Dennis doesn’t cause too much havoc, so you can do it all over again next week

As I arrived at Sale Water Park this morning, I was surprised by the absence of RED (Run Every Day January) Runners who have been conspicuous at parkruns for the past few weeks.  ‘A local aberration?’ I wondered aloud - ‘Nope it’s February the 1st’ answered a passing runner.  And it was!

As the sun rose in a golden but windy glow over the water, 253 enthusiastic people and a walker with 5 dogs (more about those later) arrived at Tree Tops Cafe to run, jog or stroll round the 117th Sale Water parkrun.

Sale is always an attractive run and, as a tourist, it is lovely to see it at different seasons of the year.  Today (apart from the chilly wind) it was almost spring-like with catkins trembling on the trees amidst green leaf buds, grebes diving in the lake and blackbirds slinking furtively in the bushes before making sudden darts at the unwary.   Sudden darts?  To be fair it was more like a combat training flight by the RAF!  After an introductory talk from Alice our run director, with rounds of applause for those celebrating milestones and for our troupe of valiant volunteers, we walked down to the start line amidst the trees.  We wandered past the Last Christmas Tree Bauble In Sale, lovingly hung on a bare sapling, led by an interesting soul, skipping blithely along, just lacking the bells and handkerchiefs to appear the Compleat Morris Dancer.  Now there’s a Folk mashup challenge for you variety-seekers out there - a Morris Dance takeover of parkrun!  Or Scottish Dance?  Or any troupe to be honest?

And so we gathered enthusiastically at the start line where Christmas decorations (well, one...) bedizened the bushes (again, one).  We were mostly wrapped snugly in our snoods, sweatshirts and warm leggings to ward off the biting wind, but one intrepid soul was wearing shorts, T shirt and blue legs.  Odd to see a City fan this far south of Piccadilly!  Or maybe they were just cold.  Then, with instructions to ‘Run straight through the puddles’, with the baying of hounds behind us (remember those 5 dogs??) and a cry of ‘3, 2, 1’ we were off!

There is always something interesting to spot at Sale Water Park and today it was cows.  Milton Keynes may have concrete ones, but Sale has plywood cut outs.  Apparently this was a challenge to see how many one could spot, but I soon lost count whilst concentrating on the route and skirting puddles unsuccessfully (contrary to the above instructions).

And now for the congratulations and thanks.

First of all the volunteers

Today there were 18 of you wonderful people doing all the jobs necessary to set up and run the event in a bitter wind (have I mentioned that it was windy?).  These included: 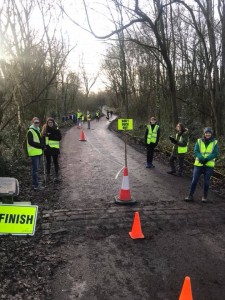 You are amazing people and deserve a big thank you and round of applause; we couldn’t have had a parkrun without your help!

If you would like to join our band of happy volunteers - there are plenty of opportunities to help out and we are always pleased to see new recruits.  Just take a look at our park run web page and send us an email at salewaterhelpers@parkrun.com if you would like to take part as a volunteer.  See you next Saturday!

A word of encouragement - please don’t think you have to be another Mo Farrah or Kelly Holmes to join us.  Whatever your speed or ability, you are welcome to join us.  You will never be the last person in - we have a tail walker who takes that position - and there is Tree Tops Cafe at the end for a warming drink.  Whether you walk, run or jog, you deserve a round of applause for taking part and finishing this 5k course.  Because for most of us Parkrun is not so much about racing and winning, but a warm and welcoming social event with a run or walk thrown in for good measure.  So come along and try us out!  Sale parkrunners look forward to seeing you again next Saturday.

So this year we kicked off the New Year the best way we know how with 775 of you wonderful runners descending on our lovely Sale Water Park, you'd think we'd have been put off especially when we were still processing the result late that afternoon but that is absolutely not the case because we are back again for another year!!!

This will be our 3rd year hosting New Years Day at 10.30 so we reckon we've got it down and sorted out the funnel! Massive thank you to our fabulous Core Team not just for coming together to make sure this happens but also for everything they've done in the past year. Of course as it is every week this would not be possible without a team of volunteers so if you can join us please drop us an email so we can add you to the roster. 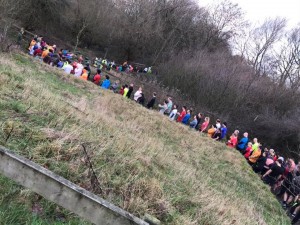 So I’m writing a run report for the very first time,

And to give it a twist I thought I’d do it in rhyme.

Mate, what about the rugby, you absolutely sure?!

Sun coming up over the water, a beautiful vision. 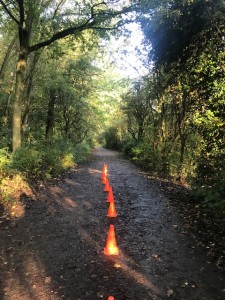 It could all have been off though, as some will have known,

When Run Director Vic had a moment, she briefly lost her phone! 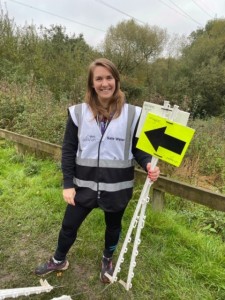 Domestic tourist of the week came all the way from Walthamstow,

But to beat the international star from Canada you’d have some way to go!

Running today with the family, one of three generations! 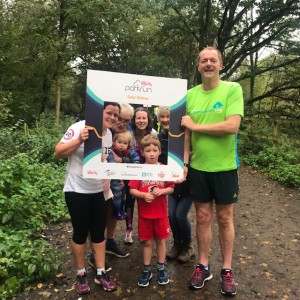 171 people were returning to Sale, 42 newbies making up the rest,

29 people on the day, recorded a new personal best!

It’s a run not a race but let us not scoff,

At the quickest time of the day produced by Tom Gough!

Was the first lady home, blink and she’s gone!

Finally, we must finish with the tremendous volunteers,

Without them there’s no parkrun, so they deserve all the cheers. 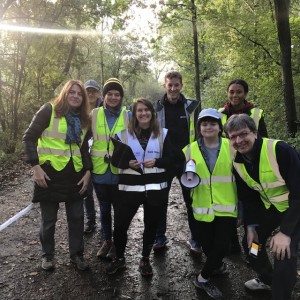 20 in total this week, too many for me to mention,

Unless I had longer, say like a Brexit extension!

See you next Saturday morning, when we do it all again

Thank you Tom Longden for this lovely rhyming report.

Today is a massive milestone day for me as I am celebrating my 50th parkrun. 12 months ago I very nervously turned up at Folkestone parkrun. I was 15 stone and extremely unfit. I was determined after a health scare to get fitter. I started eating healthily and walking. I managed a time of 59minutes and 59seconds and was so thrilled I had managed it under an hour. 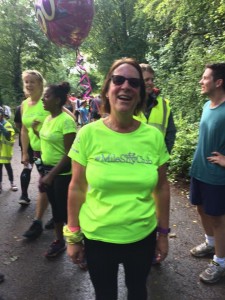 I went again the following week and managed under 50 minutes. I honestly thought it couldn’t get any better. On my return home I came to Sale Water parkrun and have kept coming back week after week with a couple of tourist runs in between. 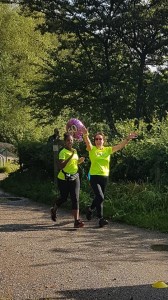 On my second week at the Water Park a MileShy runner was Tailwalker. On hearing my story she strongly advised me to go to their club. What me? I have never run in my life! I am SO unfit! My excuses was a very long list. I went and have never regretted it. 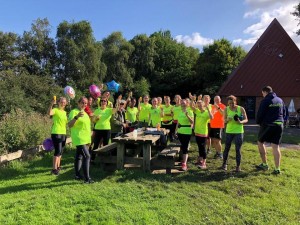 I now run about four times a week and am totally hooked. Saturday isn’t Saturday without a parkrun and love the whole ethos of it. I have had the huge privilege of Tailwalking myself and just love to share my story with others who may be struggling. Thank you so much to everyone at parkrun for giving up your time week after week to help people like me to become a much fitter person. 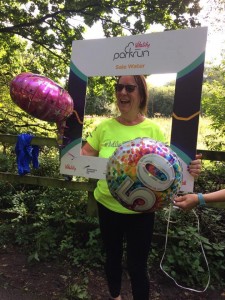