I chose Severn Bridge for the unique Leap Day parkrun on 29 February, a majestic location where Roger Moore’s Bond would be at home in a final showdown with the bad guys. It was the first parkrun leap run, the next chance will be in 2048. Excited about the prospect of crossing from Wales to England and back again on the legendary Severn Bridge, I checked into the Severn View Travelodge off the M48. In an uncanny coincidence I had room 007; fuel to the fire of an already hyperactive mind! Sadly, I’d forgotten my passport and running watch. Neither mistake was to prove fatal, passport checks were not in operation on the border (Al Stewart wasn’t available!) during the run and an iPhone was used for pacing purposes! 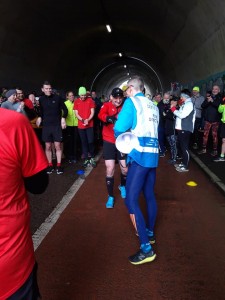 Nerves around the arrival of Storm Jorge and the potential closure of the Severn Bridge due to high winds, led to a poor night’s sleep. Despite closure of the crossing during the night, it was open in the morning and the historic event was on. Arriving at the tunnel near the start, the mood was convivial reflected by Jonathan Carter’s excellent run briefing in which the assembled mob of 181 parkrun enthusiasts was encouraged to cheer for either England or Wales! The Tunnel of Love didn’t live up to its reputation with no proposals forthcoming from women as is the tradition on Leap Days, so Jonathan proposed on one knee to Julian Smith asking for his hand in co-event directing. Thankfully, to save Jonathan’s blushes, Julian said yes! 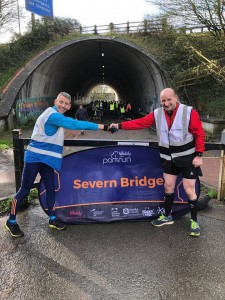 Tourists came from places as diverse as Basingstoke, Bushy Park, Glossop and Manningtree in Essex (me!). Ben Whitbread completed his 50th run, while Ross Howells and Graham Taylor joined the 100 Club. There were plenty of tourists, but special mention should be made of Debbie and Paul Moulton joining the Cow (Half Cowell) Club in making Severn Bridge their 50th different event. Also present was top parkrun tourist, Becky Thurtell, completing her 533rd parkrun and 307th different event. Incredible stats and a top time of 25:17 (74:62% age grade) to boot! We had two Jeffers (run/walk method devised by Olympian Jeff Galloway) from Glossop (Gail Jazmik and Kathryn Gray), completing the windy run in respectable times for 10/2 intervals. And finally, it was noted that the average Severn Bridge run time of 29:02 spookily mirrored the Leap Day date! 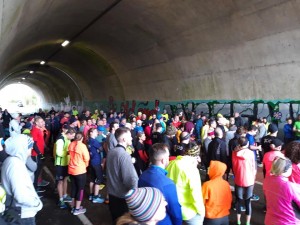 Of all the events I’ve run (52), Severn Bridge is my favourite; it even has a siren to start runners off in Wales (Monmouthshire). The rumble of runners shook the suspension bridge cycleway, slightly disconcerting for a newcomer. We soon crossed the River Wye and leapt over the border into England (denoted by flags) on the Wye Bridge (actually separate to the Severn Bridge). Once in England (Gloucestershire), we passed over Beachley Island, with the high tree canopy providing a little respite from the gusting wind. I noticed a rifle range down below indicative of the military use of the Beachley site by the Ministry of Defence. Once you’re off the Beachley Viaduct, the run progresses up the infamous Severn Loaf Hill (64 ft.) to the first tower where the bridge is around 150 ft. above the water (c. 50 m). Between the two towers was the turnaround point, expertly staffed by veteran Syd Wheeler, himself an excellent runner for age having completed 100 different parkruns. The route was lined with 19 volunteers, thanks to all of these amazing people.

Upon wheeling around Syd, the full force of Jorge was felt. I struggled back to the crest of the Severn Loaf where I was able to up the pace a little downhill before re-crossing Beachley Viaduct, the Wye Bridge and stumbling back into good old Wales.

The sprint down the heavily wooded slope towards the tunnel funnel was the easiest part of the run. Sweeping into the tunnel to the sound of a Ski Sunday style cow bell, a last ditch sprint takes you past the twinkling lights of the finish sign and the owl painted on the wall! I cannot recommend this event enough to anyone tired of their home run. It’s an all-round 10/10 event from the breath-taking views of the River Wye and Severn Estuary across to the M4 Bridge, to the well organised and ultra-friendly nature of the volunteers.

Afterwards, I took the opportunity to visit Chepstow with its beautiful castle. A Welsh pigeon deposited its load on me, while the town was engulfed by rain, hail, sleet and snow in that order! It seems we were lucky to enjoy the parkrun in glorious sunshine. Perhaps the sun shone on the righteous this Leap Day morning for just one hour? 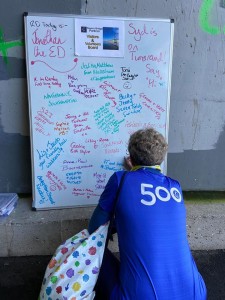 The Welsh poet, Harri Webb, famously wrote in his Ode on the Severn Bridge: two lands at last connected / across the waters wide / and all the tolls collected / on the English side. The Tolls long gone, so my own thoughts on the bridge could be summed up, rather appropriately, in a 5-7-5 syllable haiku: just five kilometres / for Severn Bridge parkrunners / five on Beaufort Scale. The astronomically important day led me to write a poem for perhaps the most extreme parkrun location which may be popular with tourists in 2048!

They say stay away

this one’s a must run

in a crater on the moon.

On the launch pad

we check our bags,

strictly no barcode, no time

damn! I’ve left them at home.

We’re not that sure

what a good time will be,

by Newton’s logic it’ll be slow

given the lack of gravity.

This week 181 people ran, jogged and walked the course, of whom 72 were first timers and 19 recorded new Personal Bests. Representatives of 43 different clubs took part.

Today's full results and a complete event history can be found on the Severn Bridge parkrun Results Page.