I returned to Yorkshire after running York parkrun on 1 February 2020, the weekend of the Covid-19 outbreak in the city. It was good to be back in the north, this time on the coast. I was tempted by the spectacular views of Bridlington Bay from Sewerby parkrun and the varied route of the course which included steps. Sadly, I’m no stranger to steps, having run the Lowestoft Scores route in Suffolk (401 steps over 4.75 miles), Whitby’s 199 steps to the Abbey (minus goth attire) and Newark parkrun which has the stairway to Devon (and Sconce Park). Having picked up a knee injury during the first lockdown, it was with some trepidation that I looked forward to Sewerby parkrun.

A Robin Hood’s Bay sunrise percolating through cottage windows was the perfect start to the morning. Arriving at Sewerby Hall after an hour’s drive, we soaked up the friendly pre-run atmosphere. At the start line, a fenced enclosure had deer among the long grass, something you don’t see at many parkruns. The first mile provided panoramic views of Bridlington Bay as the surfaced path swept downhill to the turnaround. I was lulled into a false sense of security by the gentle topography of the start. The second mile was mostly uphill along the cliff edge path, admiring the stunning chalk cliffs stretching into the distance between breaths! For me, the long uphill slog was the hardest part of the course as forewarned by numerous marshals before the off.

Turning into Sewerby Hall, the final mile is a meandering route through the gardens and woodland to the staircase of sorrow. Every move you make. Every step you take. They’ll provide that final drop-kick to the energy levels. One step beyond, the finish funnel was hidden from view in the winding labyrinth of the gardens, signs helpfully pointed out where there were 400 and 200 metres to go. After a post-parkrun drink at the charming Clock Tower Café (a must-do), the parkrun fresh feeling was neutralised by a bracing dip in the sea (there are steps down the cliffs to the sandy beach). To summarise, the varied course has it all for the runner and walker: uphill sections (elevation gain around 150 ft.), surfaced paths, off-road sections and lots of twists and turns. You really have no idea where you’re going to finish until you reach the picturesque finishing straight lined with statues in front of the Georgian country house.

Event 442 had 245 finishers and was made possible by 24 fantastic volunteers. A special shout out to timekeeper Jayne Sissons who has volunteered over 400 times; an incredible contribution to Sewerby parkrun. She was joined in the volunteering by Josh Smith (With Me Now club), touring with Lauren Turner who ran well (24:39). First finishers were the greyhounds Liam Morris (18:00) and Emma Artley (23:11). Christopher Humphries ran his 50th parkrun and is eligible for the red t-shirt, congratulations to him on reaching this first significant milestone. Six people ran their first parkrun and hopefully began their long running adventure: Joanne Deighton, Chloe Harrison, Jo Hodgson, Madeline Rowntree, Sarah Smith and Sarah Newman. It’s fair to say, many of us would not have started running without the incentive of parkrun. A total of 136 athletes beat the poet (31:11), not too difficult an achievement these days.

Finishing with the artistic portion of the report, here’s a haiku-like poem which is to form part of a series of linked poems (called a renku) as I wander between different parkruns in the coming months (fuel availability permitting):

to give to the heart

And finally, a massive thank you to all of the volunteers:

Tim Gardiner, aka the parkrun poet 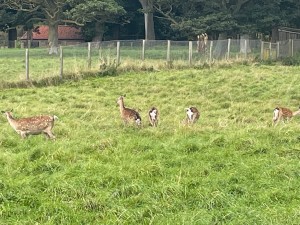 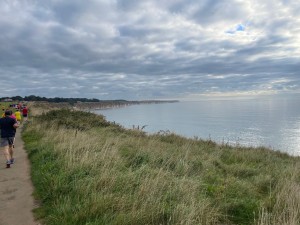 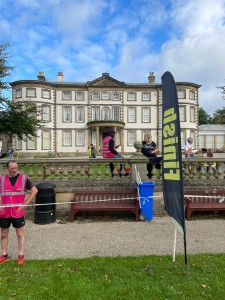 It is always such a joy to volunteer at a parkrun. This Saturday was no exception. Apart from wanting to give something back to such a great event which always gives me the best boost start to my weekends, Sewerby was on my wish list for a long time. I was not disappointed, perfect weather and just a 27 minute stroll from my B&B to begin with.

At the bandstand I was welcomed by friendly volunteers, and with all the excited chatter and greetings as all the runners arrived for the start I knew I had chosen the right parkrun. David Duffill gave the first timers briefing to the 45 first timers to Sewerby parkrun near the bandstand.

Then after a quick runners briefing and greeting outside the entrance to Sewerby Hall and Gardens all 245 of us started our run, walk or jog of this superb one lap course. Who doesn’t love a one lap course? And this one is exceptional being so varied and interesting all along the way. Starting with a stretch along the scenic coast towards Bridlington along the cliff tops then a turn left turn at the coastguard station. Once back at the Hall grounds it was a lap of woodland trail on a mixture of surfaces including wood chippings and dare I say it up a couple of flights of stairs. I think nearly everyone including myself ran alongside the first flight of stairs. The second flight was unavoidable.
Of the 245 runners 39 recorded new personal bests. Representatives of 34 different clubs took part.
Well done to Liam Morris who was the first man to finish in a time of 18.00 and the First lady was Emma Artley who finished in a time of 23.11.
There were quite a few parkrun tourists who traveled long distances to get to the start despite the fuel crises. Well done to David Marshall on his 300th parkrun.
A huge thank to our hi-viz heroes. This even was made possible by 23 encouraging volunteers: James Stewart ABEL, Heidi BAKER, Pete COLLINS, Ann DENNIS, David DUFFILL, Robert EYRE, Gill FIKSEN, Tim GARDINER, Lynda GENT, Andrew GODFREY, Kathryn HAMMOND, Elizabeth INGLE, Kara MAINPRIZE, Steve MARTIN, Kirsten PORTER, Simon PORTER, Ros PUDSEY, Jon PURDY, Pete ROYAL, Jayne SISSONS, Joshua SMITH, Tony STEWART, Joshua TAYLOR, Penelope THESEN, Syd WARLEY

Today’s full results and a complete event history can be found on the Sewerby parkrun results page. 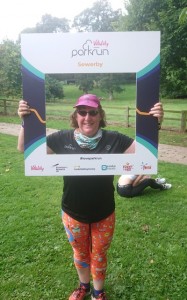 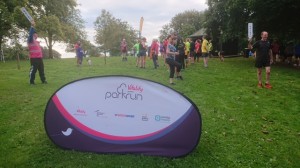 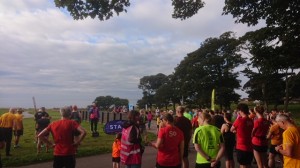 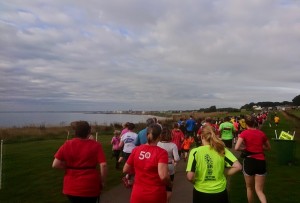 The drizzle had started early on 4th September Parkrun day. By the time the starting shout had gone up it was the perfect weather for running.

Chatter all around and then the megaphone sent us all silent! With an amazing 247 runners lined up listening to the race briefing the atmosphere was alive.

It was great seeing runners from so many different clubs, 34 in total today. After such a long time off for Parkrun, everyone quickly got into the stride of it again. Volunteers decked out in their pink hi-vis cheering us all on!

Obviously these events couldn’t happen every week without the selfless help of the volunteers. This week the heros included:

If you haven’t volunteered, you should give it a go, such a great feeling and it keeps your favourite Parkrun going!

As for finishers everyone did amazingly, as a first timer to this course it was so well marked and being only one lap made it a brilliant and speedy course. Our first finisher for the males was Phill Taylor in an amazing time of 17:42 and our first female finisher was Laura Allen in an impressive time of 20:04 and a first timer!!

With so many first timers and PBs today it really is a great course for both! Having bagged a new Parkrun PB today myself I can definitely say that those first 2 miles set you up for a great time. Then it’s the final push on the last mile, before challenging a fellow parkrunner to a cheeky sprint finish!

Hope you all had a brilliant run as well today and enjoyed that post run coffee and cake! 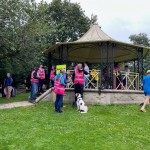 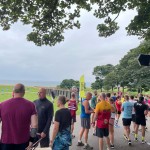 Parkrunners assemble for the start 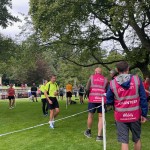 It is now 6 weeks since parkrun Sewerby restarted in all its glory! After the last year and more there was always going to be doubts about how a restart would go. Operating within a COVID framework involved an alteration to the post finish area along with less noticeable changes. The outcomes seem to have been favourably received and we have had 1825 completed finishers in the last 6 weeks which compares to the equivalent 6 weeks in 2019 which had 1815 finishers. Last week (The Bank holiday) saw 374 finishers which was the 3rd highest total in the previous 10 years.

So on reflection the number of participants has remained constant and we have so far had as many if not more volunteers than previously, and several are learning the variety of volunteer roles that are required each week. The participants are also producing some excellent results and the next month as the tourist season ends will show how parkrun is moving forward as both a healthy and social option after the terrible last year and more.

As we have been parkrunning for a few weeks again, perhaps it's time for some reminders about what is expected of Sewerby parkrunners. The following points will make things much easier for the volunteers and the results processor