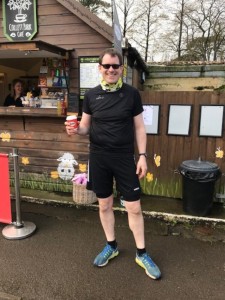 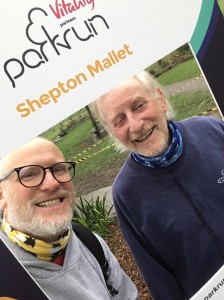 This was my third visit to Shepton Mallet parkrun. The first time the circus was in town and I ran alongside an actual trapeze artist. The second time was New Year’s Day; it seemed like a good idea at the time, doing two parkruns in one day, but the other was Street and it all got a bit muddy. And this week I ran with family and friends and it was my best visit yet.

I like Shepton Mallet parkrun. Collett Park is really nice and, while I don’t have a problem with parkruns wherever they can find space (along the commons, seafront, across major motorway bridges etc.), its lovely to run in an actual park. A pretty Edwardian park with undulating paths and trees and a pond. This was my 74th parkrun. I’ve visited forty-nine different events, mostly in the south west, and Shepton Mallet is one of the few I’ve done more than once or twice. Why? Because its where I registered my dad, Ron Wood, when I set him up on parkrun, so this is his home run (this weekend was Dad’s birthday and running with him was the cheapest present I could think of!). While I am by no means the most travelled parkrunner around, I’ve seen enough to know that Shepton Mallet has more than its fair share of quirks and idiosyncrasies.

Let’s start with the obvious one first. Lots of parkruns have an out’n’back stretch, marked at one end by a post/cone/person that we have to run around to before heading back, but how many of them name the marker? I don’t mean the ones with a person, they’re all called Marshall anyway, but the cone itself. Shepton Mallet has Joan the Cone and with her regular chaperones she is part of the core team of volunteers.

We all know that the volunteers make the parkrun. But in Shepton Mallet there’s one who makes the run weird. Where else can you get that sudden onset of anatidaephobia (the fear that somehow, somewhere, a duck is watching you – look it up, it’s a thing!) than down by the pond in Collett Park? Not once, but on all three laps! You hear it but there is no duck to be seen…

And then there’s Shepton Mallet parkrun’s very own challenge. Many of us know the thrill of checking our results against such challenges as Stopwatch Bingo or Groundhog Day, or searching for a new parkrun by starting letter or event number, because it gets us closer to a virtual badge on a website (incidentally the S of Shepton Mallet counted towards my new game, getting parkruns to spell out ‘C O R O N A V I R U S’ before they get stopped for public health, but I still need a V and an I, as well as another O and an R). But Shepton Mallet’s thrill-seeking runners have the Cappuccino Challenge, for which the only reward is kudos from those in the know or (quite probably) third-degree burns to the hands and face.

As a tourist these things add to the appeal of this parkrun and so it was fun to be in Shepton Mallet with not just my Dad but some fellow travellers from Bristol, both of whom earn honourable mentions later on. But first let’s talk about the run. It was good.

You want more? Oh, alright. There were 195 finishers today, 13 of whom were anonymous – don’t forget those barcodes! There were six first time first timers, Mark Bailey, Owen Roberts, James Wylie, Nicholas Smith, Fran Gillard and Gemma Hand…welcome to the park, you picked a great one to start with. Caroline Hobbs was our Run Director today and was so efficient that we stood waiting at the start for a few moments so that we could set off at 09:00. The weather was kind, the ground was relatively dry, and the marshals were all in fine form and very encouraging. There were 39 PB’s recorded, Matt Daffurn beat his last week’s previous best time by 9 seconds and Jenni Connett took a whole second off her record, set in 2018. My friend Mel Gilbert got a course PB but also gets a mention for being most runniest runner, notching up her 342nd parkrun.

As this is my run report the only other PB I’ll mention is mine. The plan had been to run with my dad, but I set off fast and left him behind. So for the first time I beat my dad and it’s left me with a bittersweet feeling of celebrating an all-time PB, knocking 40 seconds off my best ever time from way back in 2012, while also regretting that Dad, who has run since getting his house tie for cross country at school, has finally been overtaken by his fat son.

There was only one entrant for the Cappuccino Challenge this week, Richard Aquilina, my friend from the late lamented Little Stoke parkrun in Bristol. The eternal tourist, he’s run Shepton Mallet before and fancied trying something different. On the first lap he ordered his drink at the Collett Park Café, on lap two he picked it up and then he discovered why most people make it a cappuccino…it’s all about the foam! Richard ordered an Americano which was hot liquid all the way up to the top! But despite a few minor facial scalds he finished in 27:03. Not his course PB but still a lot faster than me on my best day ever!

I will be looking forward to my next visit to Shepton Mallet, an event that really is everything a parkrun should be. Thank you for having me.

Extra special thanks go to Richard Maddock - this week was his 100th time volunteering. Fantastic!

There were 215 runners this week including visitors from Frome and as far afield as Salisbury, Sheffield and Swindon enjoying this lovely course and back to running the correct way around after last week’s leap year run. There will be lots of lovely photos uploaded soon so keep an eye out.

There were 21 first timers with us and 7 doing their very first parkrun – a very warm welcome and it is hoped that you enjoyed it and will come again.

50 people achieved a new PB so there was lots of ringing of the PB bell which is on the side of the purple equipment bin.

There were 3 runners who notched up 50 parkruns this week, they were John Johnson, Joanne Stephens and Sarah Daffurn, who also achieved a new PB and we hope to see those red T-shirts very soon.

There were several ladies running in purple to celebrate International Women’s Day, celebrating women's achievements, raising awareness against bias and taking action for equality. Well done each and every one.

Finally at Shepton Mallet, we pride ourselves on being a friendly bunch of runners and marshals; parkrun is committed to inclusivity and a culture that is warm, welcoming and fun. Please be friendly, supportive and encouraging to all, thank you.

This week’s event was brought to you by the number 22, that’s how many fantastic volunteers donned the high viz jackets and enabled parkrun to happen. Thank you to each and every one of you, but a special mention for Marilyn and Sandra who are our regular Joan the Cone marshals. This week marked their 80th volunteer milestone. Personally, their greeting and encouragement is always very welcome after the long trek up the cycle path. Congratulations both and THANK YOU MARSHAL!!
230 parkrunners completed our course this week, 27 of you were first timers; we hope you enjoyed yourselves and hope to see you again soon. 47 people achieved personal best times which is amazing. We often forget to mention our PB bell in the briefing (as I did this week). It is on the side of the purple equipment bin, please feel free to give it a ring when you have achieved that new best time (or think you have). Amongst the finishers was Sarah Brown, completing her 50th parkrun. Congratulations, red t-shirt incoming!!
As I am typing there is another weather warning issued for Saturday with Storm Dennis forecast to bring high winds. With the number of trees on our course we will need to monitor the situation closely so please keep your eye on our Facebook page for any notifications.
Don’t forget the council are running a free defibrillator (use) course on March 6th at 10.00.
Finally at Shepton Mallet, we pride ourselves on being a friendly bunch of runners and marshals; parkrun is committed to inclusivity and a culture that is warm, welcoming and fun. Please be friendly, supportive and encouraging to all, thank you.

There was definitely a 'good to be back' feeling at Shepton Mallet parkrun on Saturday and in my privileged position as Run Director (RD), I could see a large crowd of people eager to continue their battle against the 5k (3.1 mile) course. There was a nod of appreciation to those members of the core team and volunteers who coped with the events surrounding the previous cancellations so professionally, then the 239 participants, including visitors from Salisbury, Dorset and Wales, lined up.
In his eagerness to get things going (and with a watch and phone that seem to be linked with a wayward satellite), the RD started the run two minutes early! That didn't seem to upset the runners as 35 Pbs were recorded and there were plenty of smiles and appreciative comments at the finish. Congratulations to Michelle Underwood who completed her 100th run and to all of you participant and volunteers alike who, after our recent events, continue to make Shepton one of the best parkruns I know. (other good parkruns are widely available).
As mentioned in the briefing, the council are running a free defibrillator (use) course on March 6th at 10.00)

Hat of the day – Trapper (musky) hat.
Song of the week – Saturday in the park by Chicago