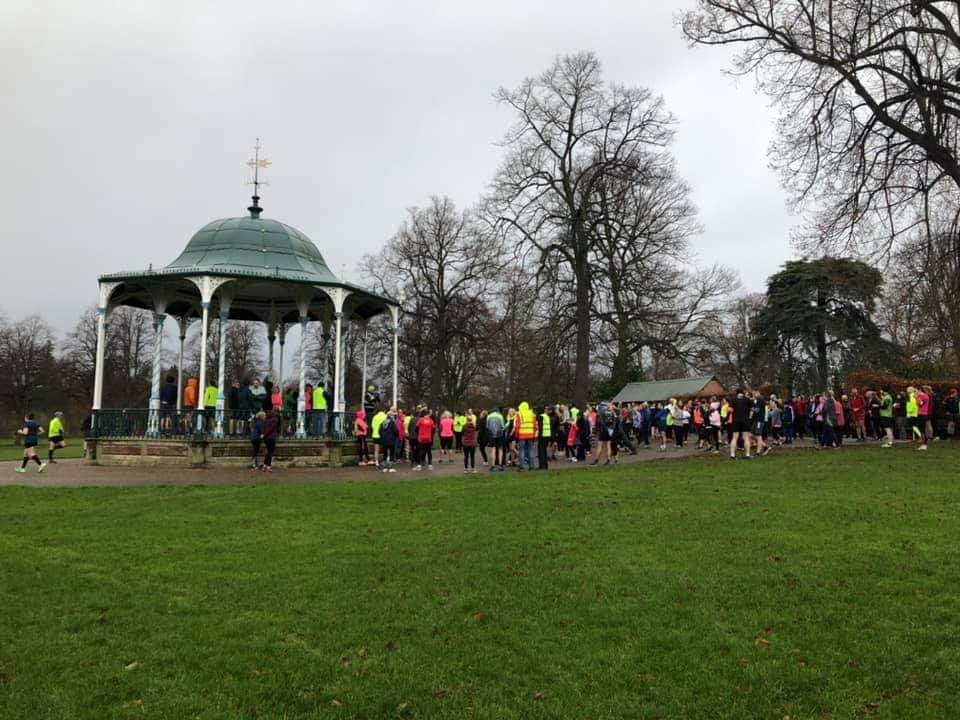 Allie and her family were at Bushy park parkrun to celebrate Allie's 100th with 1,200 other runners! 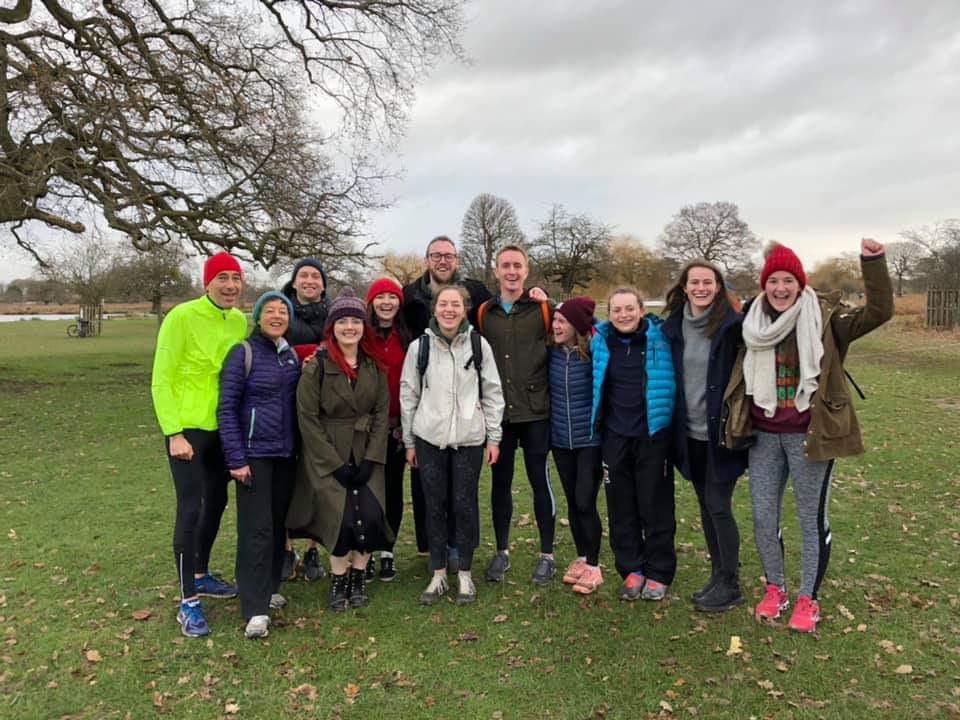 parkrun HQ allow parkrunners to complete 2 parkruns on New Years Day. It will be possible to do Shrewsbury parkrun at 8.30am and then head to one of our neighbours to complete the double.

To find the most up to date information on which events will be putting on Christmas Day and New year day parkruns check out the Christmas Compendium - https://www.parkrun.org.uk/special-events/

We will need volunteers to help us put on these events. Our future  roster can be found here - https://www.parkrun.org.uk/shrewsbury/futureroster/      If you can help out, please email Mark at - shrewsburyhelpers@parkrun.com

We had tourist Tim Gardiner, join us yesterday who has written the following report: 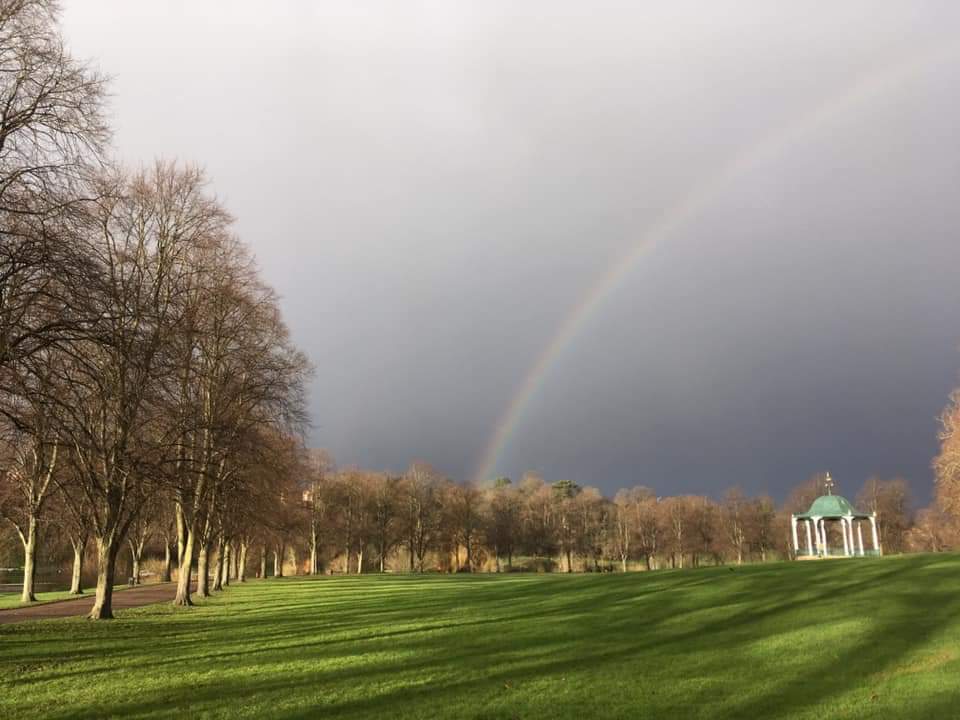 It’s been quieter since I booted out that darn menace, Ippikin, for not paying his rent on time. He’s reduced to collecting the 20 pence toll on Kingsland Bridge these days. I’m also annoyed with Shrewsbury parkrun. Apparently, I was too big to enter last time; finishing a parkrun in just ten steps would shatter the course record. That Baddeley fellow might also be upset to be trumped in such an emphatic fashion. Besides, where do I start? At the back and I’ll squash the tail walkers, at the front and that’s Shropshire’s future county champion flattened. The spirit of inclusivity meant I should’ve been allowed to trample The Quarry. Well, I’m going to block up the river and spoil their fun this morning! I set off from my two up, two down cave in Wenlock Edge. I pass Ironbridge, but something’s missing…

It’s hard this speed walking lark. Plus every so often, a hawthorn bush implants itself in a leathery foot, my Nike Air trainers not sufficient for trail walking. It’s not long before the Wrekin dominates the skyline. All those years ago, I had to dump the spadeful of dirt (okay, so it was an unrealistically large spade, but that’s Shropshire legend for you!) because of that pesky cobbler from Wellington. And thus the Wrekin was formed.

As I get ready to vault the Ercall, a whistling man stops me in my tracks. The tattily dressed chap, complete with top hat, jacket with elbow patches, and curled up boots, asks me where I’m off to. He also notices my inadequate running footwear and offers assistance in the form of an extra-large piece of foam.

giant steps…
damn it, I forgot
the insoles

The cobbler talks and talks and talks. I’ll be late for the parkrun at this rate. I finally manage to bid him farewell, but I’ve already missed Simon Meredith’s run briefing. From my insanely lofty height (remember how big that spade was for scale), I can make out 37 volunteers, many in high vis jackets. They’ve started, 415 athletes whirling around The Quarry. Damn that old cobbler!

Arriving at Shrewsbury, I’m too late to take part. The rage and righteous indignation consumes me. I must find some trees to block the river; I’ll spoil the party for Liam Rawlings and Bethany Trow, on course to be first finishers. If it wasn’t for that meddlesome shoe-mender I’d have won this easily in less than a minute. To quell my petulant anger, the run director finally allows me to participate. A few lusty strides and I’ve completed the two laps and destroyed the finish funnel, narrowing averting parkrun disaster by missing the barcode scanners.

at the end
of the finish funnel…
a rainbow

I’m reminded over tea and Oreos that James Taylor has reached the 100 Club, Harry Marston-Jones completed his 50th run and Aeryn Atkinson entered the Junior 10 Club. Apparently, 184 athletes ‘beat the poet’ as the scribbler’s pace subsided in the last mile. There were 40 pbs including one for Walking at parkrun’s Sarah Ward (41:45). Wheelchair athlete Sarah Ward finished strongly (36:28).

On the way home, I jaunt up the Wrekin in three mighty strides and scratch my back on the transmitter. The Wiccans have returned, another Wicker Man ready for immolation.

Ercall jog…
I clean parkrun mud
off my shoes

I decide to set a test for the athletes of Shrewsbury. To complete my Wicker Man challenge (because legs will be burning at the end!), they’ll have to run up the Wrekin from the car park to the summit trig point in a faster time than their personal best at Shrewsbury. The fastest athlete from today has run the 1.4 mile route (640 ft.) in 16:23 (Peter Stone: pb 20:51), while the parkrun poet managed 25:19 (pb: 26:18). Go on give it a go, the views are fantastic!

I hope you like the different style of run report, told using the legendary Wrekin giant who wanted to destroy Shrewsbury and the cobbler who stopped him. Award-winning editor and poet Claire Everett was born in Shropshire and has a love of its rolling landscapes which have appeared in her poems published worldwide. Claire often writes short Japanese poems, such as this wonderful evocation of the Stiperstones:

white-knuckled
on that rocky throne
when the raven clears
the nights from its craw, will I
be lunatic or sage?

The poem could perhaps reflect the madness which afflicts all those who approach running for enjoyment on a Saturday morning! Rare insects such as the bilberry bumblebee are found at the Stiperstones. Well worth a trail run, don’t miss the Devil’s Chair!

This week 415 people ran, jogged and walked the course, of whom 24 were first timers and 40 recorded new Personal Bests. Representatives of 33 different clubs took part.

The event was made possible by 37 volunteers:

Today's full results and a complete event history can be found on the Shrewsbury parkrun Results Page.