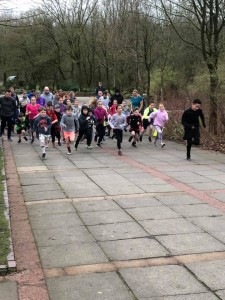 Hello junior parkrunners everywhere and welcome to this week’s Skelmersdale junior parkrun run report, Well, a lot’s happened since the last run report was published, that’s for sure, such as, European gold medallist Tiffany Penfold presenting awards at our second birthday party, and Woodland Whippet Nikki Schofield becoming the first ever runner to join the 100 Club at Skem juniors.

We’ve also seen lots of fantastic performances and welcomed lots of runners/joggers/walkers into the junior parkrun family. Since Skem juniors started in December 2016 we’ve seen 671 junior parkrunners cross the line 5622 times at 117 events, recording a total of 1130 PB’s! Well done to all our 671 runners and thanks to Event Founder Paul Cotterill and all the volunteers who have made all these events possible!

Conditions were perfect for running in this week at event #117, as it was pleasantly warm with no wind. 57 runners completed the course this week, ten of whom were taking part in their first ever junior parkrun, including today’s overall first-finisher Louie Mullan. Woodland Whippet Kady Hall led the female field home this week for the eighth week in a row.

Congratulations to Ella Drake and Joel Wood, who both joined the junior parkrun half-marathon club this week, with both of these runners having run all of their 11 junior parkruns here at Skem! Joel even threw a new PB of 11:59 into the bargain!

junior parkruns are for runners/joggers/walkers of all abilities and we encourage all juniors to take part. It is important to emphasise that parkrun is not a race and that the aim of parkrun is to encourage as many people as possible to get out and about and do some exercise in the fresh air in a friendly, supportive and no-pressure environment. You may be thinking, “I’m not very sporty, so parkrun’s not for me”. Well, you couldn’t be more wrong in thinking this. parkrun is a grassroots activity that literally everyone can take part in, from elite runners to those who have never done any running at all. parkruns are organised by teams of very nice people who care passionately about encouraging as many people as possible to participate in grassroots sports or just to do a bit of exercise and get a bit fitter, and many of them are parkrunners themselves who come from a wide variety of backgrounds and have different levels of athletic ability, and who have experienced first-hand the benefits of taking part in parkrun. So, if you are a junior and you are thinking of taking part in parkrun, then please do come along to our next event, and we will be delighted to welcome you into the parkrun family!

Juniors are also encouraged to volunteer at parkrun, as junior marshals Oliver Farrer and Dominic Hanlon did this week at Skem juniors!

Have a great week, everyone, and see you all at Skem juniors next Sunday at 9:00 am!

The 26th of February wasn’t very cold. Thankfully, hurricane Doris had passed through and it was safe to run; the fallen tree did not block the path.

It was a great turn out with 89 young runners raring to go - unfortunately one particular marshal left the scanners at home. He very kindly whizzed home to get them. When he got back, he was welcomed by a huge applause only to trip over and land on his front. It was truly a moment we will never forget. [Ed: that particular marshal was Stephen, and believe me, we're not going to let him forget his circus act either]

Amongst the huge amount of 89 runners were 15 newcomers. We hope you had a great time and will come again soon.

A huge congratulations goes to Oliver Farrer and Chloe Gregory Moss for being the first male and female to cross the line.

A big well done to the 17 pupils who achieved personal best (PB’S).

We would like to praise Adele Arbidane and Blake Beach for completing their 11th park run which is equivalent to half a marathon (22km).They will get their wristband next week.

We encourage Daniela Putnina and Rihannah Marsh to run next week as they will achieve their 11th park run too.

Last but not least, thank you to Paul and his team of marshals; we couldn’t have done it without you.

No big report this week because the dog ate my homework, miss.

Here are the results

No big report this week as the team from Woodland, who have taken up reporting here, are on half term.

The 5th of February was a cold, but not too frosty, morning. 64 children participated in the Skelmersdale junior parkrun.

Among the 64 runners were 21 newcomers. We hope you enjoyed it and will come again.

We encourage Adele Ardibane to run next week, as she will eanr her wristband for eleven parkruns, which is equivalent of half a marathon (22km)

A huge thank you goes to Paul and his team of 20 marshals- we couldn't have done it without you. Your encouragement kept us going.

The full results can be seen here.

This week's report by the Woodland Whippets.

On the 22nd of January, it was a freezing cold morning, but this didn’t stop 58 young runners from taking part in the Skelmersdale Junior Park Run.

We would like to welcome our 14 new comers, we hope you enjoyed the hilly course and we look forward to seeing you again.

Congratulations to Oliver Farrer and Chloe Gregory Moss for being the first male and female to cross the finish line.

We would like to applaud the 20 pupils that achieved a PB (personal best) despite the harsh weather conditions.A special mention goes to Isabella -Rae Holden and Nikki Schofield who have completed 11 Park Runs which is equivalent to half a marathon (22km). We encourage Blake Beach to take part in the Park Run next week as he will also reach his half marathon.

We would like to thank Woodland Community Primary School, for bringing 22 present and past pupils along to the Park Run. We encourage other schools to get their students involved.

Last but not least, a massive thank you goes to Paul and his team of marshals; your encouragement kept us going. We could not have done it without you!

This is just a quick filler to keep us in sequence, pending the start of 'proper' reports next week.

Results for this week are here, with details for all 60 runners.

There were five 'Unknowns', with 18 First Timers with is and 21 Personal Bests (which you can't get on your first run)

39.4% of runners were girsl (44.4% if I strip out the unknowns which parkrun assumes are male)

A very brief report on run #2 this week, and a bit late in the day.

We're not yet quite into the rhythm of run reports, and as noted last week we hope schools and runners themselves might start doing them.

Great to see 52 runners out on a mild January morning for the first run since Christmas, getting back into the swing.  Everybody ran really well, with 20 runners joining us for the first time, and 12 runners getting a Personal Best on their second run.

Perhaps the biggest 'hats off' though goes to Edith Sudworth, who fell and scraped her arm quite a lot, but still got up and finished before being taken off for a dressing on the elbow.   Let;s give her a big clap if and when she's with us on January 15th.

On the chill but fine morning of Sunday December 18th, Skelmersdale Junior parkrun was launched, and the 91 young people who came to launch it will always now be able to say "I was there".   Well done to all of you, and well done to all the parents, grandparents, other family members, as well as school staff (more of them below) who made sure you got to the start line on time.

Just by way of comparison, when the largest junior parkrun in the country launched in 2010 at Bushy Park in London, there were 9 runners.  At their 43rd event, they had 432 runners. Check out the number here  At the same rate of growth, from our starting point, we should have 4,500 runners a week by October.   Well, yes, my statistical methods might be a bit dodgy, but it's still a great start.

Results for the run can be found here.  You will see that the list is dominated by runners from Woodland Primary School, and special thanks are due to the staff team there, not just for developing a real 'running culture', in which parkrun plays just a part, and making sure so many from the school lined up for the start, but also for their generosity in helping to get children from other schools registered.  All the efforts of staff at Woodland, and other schools across Skem, are appreciated, and its that enthusiasm which led to the good turnout.   Let's continue that in 2017.

It was great to see how much fun everyone had, and it's been great to get really positive feedback over the last few days, with lots of people telling us how much they're looking forward to Sunday January 8th, and then weekly, for ever........  Photos of the event can be found here and if others would like to do contribute their photos, they can do so by signing up online for a flickr account, and posting them to our page

That's nearly it for this first run report.  In future, there'll be lots to celebrate, as runners really improve their times through practice, and as milestones are reached and the special bracelets are handed out to those who have completed a half-marathon, a full marathon, and an ultra-marathon.   There'll be plenty to report, but who does the reporting is an open question.   We're open to offers from budding journalists, or from schools who want to make the reporting process (perhaps including some statistics) a special project.

More of all that anon, but we close this report on a note of deep controversy.

On Sunday, we claimed to be the only parkrun in the world that goes underneath a roundabout.    However, in recent days this claim to fame has been challenged by runners from Greenpoint (adult) parkrun in Cape Town, which isn't famous for roundabouts at all, but who say they also have a course under a roundabout.

Naturally, this is a very serious matter, and we have set up a special Skelmersdale junior parkrun Roundabout Adjudication Committee (SjrRAC) to look into the matter.    See what you think from their course here but it looks to the committee at this stage as though we will be contesting the Greenpoint claim, on the basis that the course only goes at a low level round the edge of the roundabout but not fully underneath.

Ultimately, we may have to send the committee over to South Africa for three weeks (expenses paid, of course) to make a definitive ruling. This will be a daunting task, but nothing is more important than the reputation of Skelmersdale junior parkrun, and its roundabout.

See you on the 8th!  If you know of anybody who would like to come and volunteer, please point them in the direction of our future roster and ask them to drop us an email  skelmersdale-juniorshelpers@parkrun.com

From 'The Team', (incorporating the SjrRAC)