Welcome to this week's run report from guest writer Tim Gardiner, including our very own haikus. If anybody else fancies lending their own creative touch to our report, please do get in touch. We will bring you an update on when we'll be returning to our main course as soon as possible. 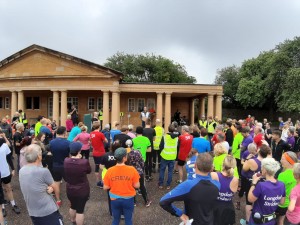 The second parkrun at Sloughbottom Park (pronounced locally as Slo-bottom!) was well attended with 186 people running, jogging, and walking the hallowed 3.1 miles; up from 175 at the inaugural event.

The first week’s route was obstructed by surfacing works on the Marriott’s Way, so a new course (3 laps of the park) was devised to ensure the event continued in good spirits.

We had a good array of Norfolk runners and folk from as far away as Nottingham; 147 first-timers in all, with 20 running clubs on show. Unsurprisingly, just 8 runners managed a
personal best, but congratulations to them. The course age-grade record (90.16%)
was achieved by Eva Osborne (75-79) who ran an astonishing 28 mins 58 secs. This will be a tough record to beat. 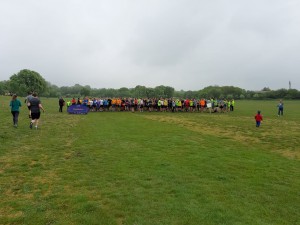 Kendall junior delays the start (he wanted a snack)

The event was well supported by 23 volunteers. The enthusiasm of these high-vis heroes
never ceases to amaze. I must thank Ben Kendall, the Run Director, for inviting me to write
this run report. 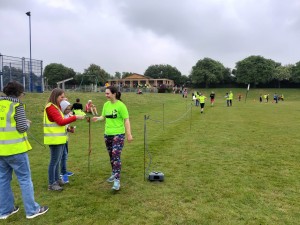 I love the freedom to explore that running brings, and with it find inspiration for poetry. It's also an escape from life's problems; a chance to focus on the run and the surroundings. To link creativity and running, I tour around different parkrun venues (as the unofficial parkrun poet!) each Saturday (Sloughbottom was my 50th ), writing a short poem or two. I'm currently trying to run every parkrun course in East Anglia (Cambs, Norfolk and Suffolk); a feat I'm calling East Ran-glia (35 events)! I';m only 14 parkruns to the good, but well on the way to completing Tour-folk (8/16 events), Suff-ok (5/10), but some way from tucking into the Camb-wich (1/9)!

I spoke to several people who were running Sloughbottom to complete all  the Norfolk parkruns; congratulations to them on the achievement.

I’ll leave you with a couple of haiku (3 line Japanese poems) to mark the event:

VO2 max
the Wensum runs
at a slow pace