My daughter, Katie has been running for about three years now and without fail will mention parkrun in at least one in every two conversations that I have with her.  To this end I finally gave in this weekend and agreed to join her at Sloughbottom parkrun. Now whilst I may have been a runner in my youth and I was certainly a very keen if not always on target football player I can honestly say I my running days are behind me.  But Katie has assured me all the way that people of all abilities are welcome at parkrun.

It turns out she was right (but don’t tell her that!).  On arrival at Sloughbottom park on a fairly dismal wet dreary Saturday I was met with a hive of activity of people putting signs out, cones into position and flags being placed in the ground.  What struck me most about all of this was the sense that everyone was welcome and there were lots of shouts of hello, how are you? How was your run/race/next doors cat? 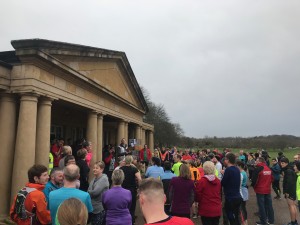 Listening to my daughter do the first timers briefing (as I was later told that was what she was doing) and being told that I hadn’t better of forgotten the barcode she had gone to the effort to print for me this week (I decided that she didn’t need to know it was in my pocket until after we had finished) The course explained and a few rules later and the limelight turned to my son-in law Radley as he was Run Director this week (ever feel like you may have been set up slightly?)

After a short briefing from him about the need to stay on the right and sharing the park with others (all sensible points as far as I can make out) we were led over to the start.  Whilst on the way I did overhear a couple of people talking about ‘Fenn time’ this being my son-in law and daughters’ surname my ears pricked it transpires that they run a tight ship and like to be out dead on 9am (well she had to be organised at something)

We stand eagerly on the start line Radley shouts 321 and we are off, now as I said my running days are well and truly behind me but I was pleasantly surprised to find that I was not the only walker, in fact there were quite a little gang of us at the back.  Katie was kind (I think that’s the word anyway) to walk with me and we talked our way round the flat one lap course. It got a bit tough for me as we came back into the park but having already walked to the park from Riverside, I was quickly chastised by daughter for overdoing it and perhaps we should stop now.

Of course, this was never going to happen and I even managed a running finish!  I think Katie was worried that she had done me some harm at the end as she did look concerned but I can honestly say I loved my parkwalk/run…now when’s the next one?

We had one special milestone this week as regular runner Derek Grasby completed his 50th run. Derek has had Parkinson's for the past 12 years and requires a support runner to make sure he gets round the course safely. He really is an inspiration to us all and says he would like us to include this detail to offer encouragement to others and show there is life after Parkinson's. Well done Derek and keep running! 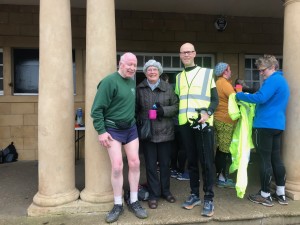 Today's full results and a complete event history can be found on the Sloughbottom parkrun Results Page.