Today was what my Grandmother would have called a good drying day…. by the time we crossed the start line shortly after 9am, there were bright blue skies and a very strong wind. Nevertheless, 127 hardy souls turned out to battle the wind at our 14th event. Co-ED Andrew was making his first appearance as RD at Soham Village College and did a great job in keeping the brief as succinct as possible so no one got too cold standing in the wind. Simon Smeeton, friend of both Soham Village College and Littleport parkruns, completed his 25th occasion volunteering and got a massive round of applause in appreciation of his efforts before the start of the run. We look forward to seeing you sporting your purple 25th volunteer T-shirt soon Simon! 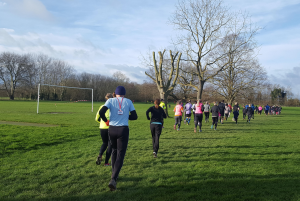 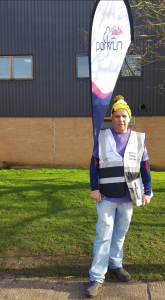 We had tourists from as far afield as the Isle of Wight, Warwick, Walthamstow, Manchester and someone even ventured all the way from Cambridge!

Everyone agreed that it was a tough run today, a combination of the mud on the bank and the strong head wind at times sapping energy on the way round. However, that didn’t stop core team members Sam and Bethan finishing with only a second between them. There were some rumours that Bethan may have been blocked from overtaking but I couldn’t possibly comment on that… 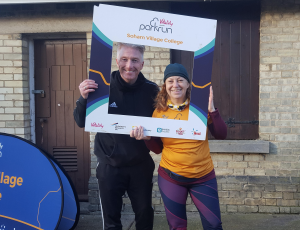 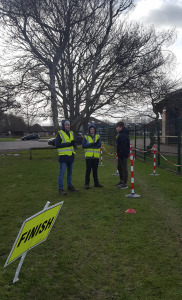 Anyway thanks to all the volunteers and participants for making today’s event a success. See you all next week.

This week 127 people ran, jogged and walked the course, of whom 31 were first timers and 35 recorded new Personal Bests. Representatives of 12 different clubs took part.

Soham Village College parkrun started on 23rd November 2019. Since then 1,042 participants have completed 2,225 parkruns covering a total distance of 11,125 km, including 496 new Personal Bests. A total of 97 individuals have volunteered 336 times.