These were all words spoken by some of our newest participants at this week’s Soham Village College parkrun. The cold and soggy conditions didn’t stop the excitement from building as 113 runners lined up at the start and began their long mission-to get around the colossal field three times.

The route was tricky. It included hills, puddles and mud throughout. The trickiest part was definitely having to climb the squelching hill and if you were not careful, your feet would lose control, resulting in a great fall into the mud.

Amongst the first-timers, were a collection of Weatheralls Whirlwinds- a running club filled with passion and commitment from one of the local primary schools. The children, their parents and teachers all collected some running numbers to show their support for their team. They all thoroughly enjoyed the run, despite the weather, which encouraged them to get on with it and finish quicker. They were all proud of each other for persevering and challenging each other to push themselves to their limits.

Having parkrun on this leap year Saturday felt even more special as our next opportunity for a parkrun on the 29th of February won’t be until 2048! 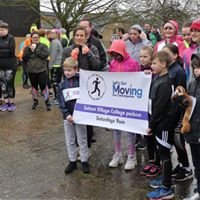 It was tough running in these conditions but it must have been even worse to stand around and volunteer on this cold run. So a massive thank you to the volunteers who made this possible.

We look forward to seeing you same time, same place next week.

Now for those stats!

This week 113 people ran, jogged and walked the course, of whom 39 were first timers and 8 recorded new Personal Bests. Representatives of 16 different clubs took part.

Soham Village College parkrun started on 23rd November 2019. Since then 1,080 participants have completed 2,338 parkruns covering a total distance of 11,690 km, including 504 new Personal Bests. A total of 102 individuals have volunteered 362 times.