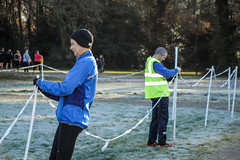 I worked at the Ordnance Survey until 2007, when I left to retrain as a primary school teacher and I have many friends who still work there, so it was good to see them out in force yesterday marshalling parkrun number 129 and to have the opportunity to celebrate some of their many running achievements.

The Ordnance Survey has always had a very positive attitude to running and other outdoor activities, so I guess it is not surprising that they have so many talented runners. Run director Peat ALLAN, who came along with wife Lynne and daughter Isla, is a case in point. With a parkrun PB of 18:31 and membership of the Bob Graham Club to his name, he clearly has talents at both ends of the distance spectrum. 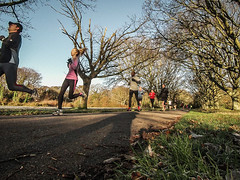 Another OS family are Viv and Dennis ALEXANDER. Viv ALEXANDER not only works at the OS, but is also currently training as a Sports Massage Therapist and leads the OS running group.

John HORTON, an occasional parkrunner, was also there helping with the volunteering. With our easy to follow course, John doesn’t need to use his exceptional talents as a navigator but, if there ever was any doubt about which way to go, I know who I would choose to follow! John is another member of the Bob Graham Club and has won many awards in orienteering and mountain marathon events over the years, including the KIMM/OMM; he recently led an OS team to victory in the Dell Corporate Challenge. 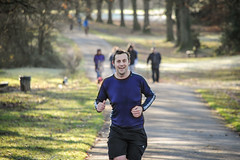 At the back of the field was another OS employee, tail runner Tara ANGLIM. I overtook her on my second run down the hill with partially sighted runner Khalid ELKHEREIJI. Last time I ran with Khalid was when he made his parkrun debut back in February. Then we took about 30 minutes to complete the course. This weekend, he completed it in 22:56, making it his 3rd PB in four weeks. A pretty impressive improvement! These statistics were pointed out to me yesterday evening at a Hardley Runners Christmas ‘do’ by Tara’s dad, Mick. Mick was another OS employee until earlier this year when he retired. Amongst the many other ways in which Mick contributes to the local running scene, he is a frequent run director at Brockenhurst parkrun - he clearly spends far too much time studying run results! 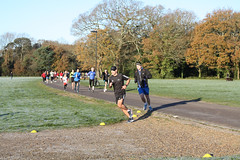 All 502 runners and the many volunteers who came along yesterday were treated to glorious sunshine and still, if rather chilly, air. This, no doubt, contributed to 84 people running a PB. Of these, possibly the most impressive was Alec RAMSAY who ran his PB of 21:31 having already run 86 previous parkruns. 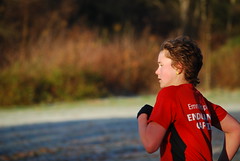 First to finish was Matthew EMERY in a time of 17:15 with Andy GRIGGS hot on his heels in second place. First woman home was Emma HOPKINS in 21:03.

This week there were 502 runners, of whom 36 were first timers and 84 recorded new Personal Bests. Representatives of 28 different athletics clubs took part.

Southampton parkrun started on 7th July 2012, and since then 6,938 different runners, including participants from 306 athletics clubs, have completed 49,227 runs covering a total distance of 246,135 km, and there have been 11,235 new Personal Bests.

Today's full results and a complete event history can be found on the
Southampton parkrun Results Page.