We definitely had the better weather on Saturday. It was a clear day, a little chilly but most definitely the calm before storm ciara hit us on the Sunday. This week 485 people ran, jogged and walked the course, of whom 36 were first timers and an amazing 120 recorded new Personal Bests. Congratulations to them!

Congratulations to Claire Defries who completed her 50th parkrun and also Matthew Guest as a first timer to Stevenage parkrun completed his 100th parkrun.

The event was made possible by 22 volunteers who were brilliant at guiding the runners seamlessly from the start to the finish. They are:

Some dates for your diaries. On the 29th February we are having the first pacers run of 2020. It is a brilliant way of working with a pacer to achieve a new PB. Currently we have 14 volunteer pacers with 20 mins to 32 mins all covered. If you would like to volunteer as a pacer for 33+ mins, then please contact us.

On the 21st March we are celebrating our 200th parkrun. We are delighted the Mayor of Stevenage will be attendance, fancy dress is optional and I'm sure we will have cake at the finish! After running 5km a little bit of cake doesn't hurt!

March 7th is International Womans Day and in conjunction with This Girl Can parkrun is supporting the day by asking for our volunteers roles to be filled by women as much as possible and to bring a newbie lady to parkrun to run her first ever parkrun.

It promises to be a special day in the parkrun year so over to you parkrunners.

A few of our lady parkrunners and volunteers over the last few months.

Stevenage parkrun # 192 attracted 534 people who ran jogged, walked and volunteered on an overcast winter’s morning. There were 62 first timers and representatives of 39 different clubs.

The first timers and parkrun tourists received an enthusiastic briefing from Tamara CLELFORD.

Run Director David Scott then briefed the full parkrun crowd, starting with an appreciation of the volunteers.

If you are interested in volunteering, please email the team at stevenagehelpers@parkrun.com.

Today's full results and a complete event history can be found on the Stevenage parkrun Results Page. The highlights include an impressive 111 people who recorded new Personal Bests. The first three men across the line were Ian Kimpton (16:35), Chris MARRIOTT (18:08) and Richard PASSEY (18:33). The first three women across the line were Kerry ARDLEY (20:04), Charlotte SMITH (23:05) and Grace BROWN (23:30).

You can catch up on parkrun news from around the globe via the popular Free Weekly Timed podcast.

See you next week when the Run Director will be Chloe MARSHALL.

Tweet
Homeward bound!
So lovely to visit my home run this morning and catch up with some of you. I’ve been doing a lot of parkrun tourism lately and they’re all lovely, but there’s just something very nice about coming home. Oh my how you’ve grown Stevenage, really pleased to see it’s becoming evermore popular. I’m really looking forward to the pacing event next month.
Our Run Director Tony Randfield delivered the briefings, making sure to ‘Mind the bollards!’ Yes they do jump out at you the first time you’re here! Especially if like me you’re busy looking at the Canada Geese on the lake. I blame David Attenborough and my daddy for my fascination with wildlife.
What a beautiful morning for it, crisp and clear with just a few icy patches. The marshals looked after everyone, especially as we approached the dicey bits where Jack Frost had visited.
29 bright and beautiful volunteers made this mornings parkrun possible, thank you for all your help and encouragement. It just couldn’t happen without your dedication and support every week.
Now on to the stats where I am also making my debut appearance. (But enough about me!)
543 ran, walked or jogged around our lovely parkrun.

24 of you were absolute beginners which we hope to see again. We had tourists from Letchworth, Buntingford and Biggleswade.

For 56 of you it was your first time at Stevenage parkrun.
There were 91 new PBs achieved this morning and 40 different running clubs were in attendance.
Hazel Jones of Fairlands Valley Spartans and I both achieved our 50th parkrun.
Paul Williams, Tracy Kane, Elizabeth Jordan and Amelie Hobbs achieved their 100th parkrun. 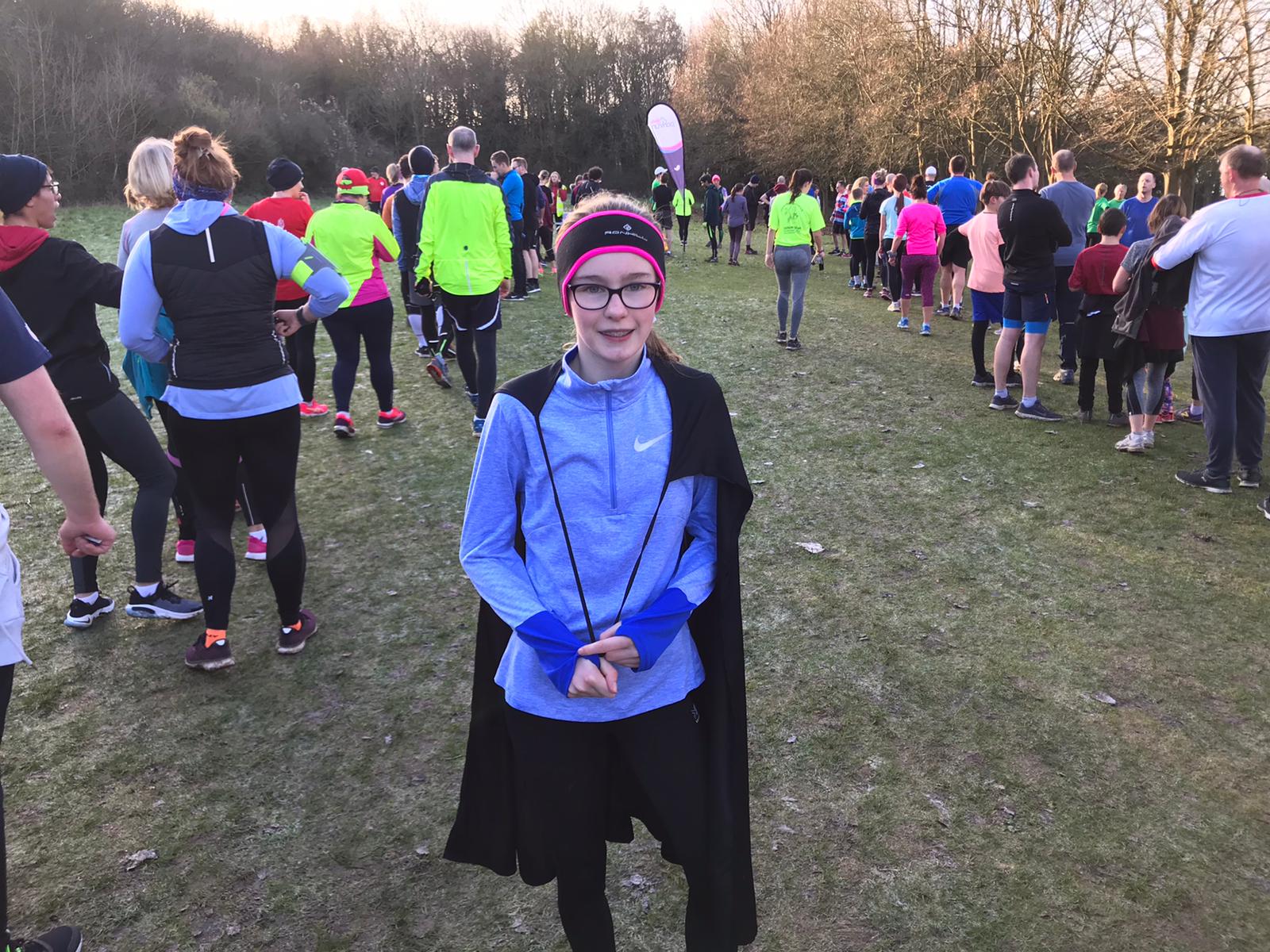 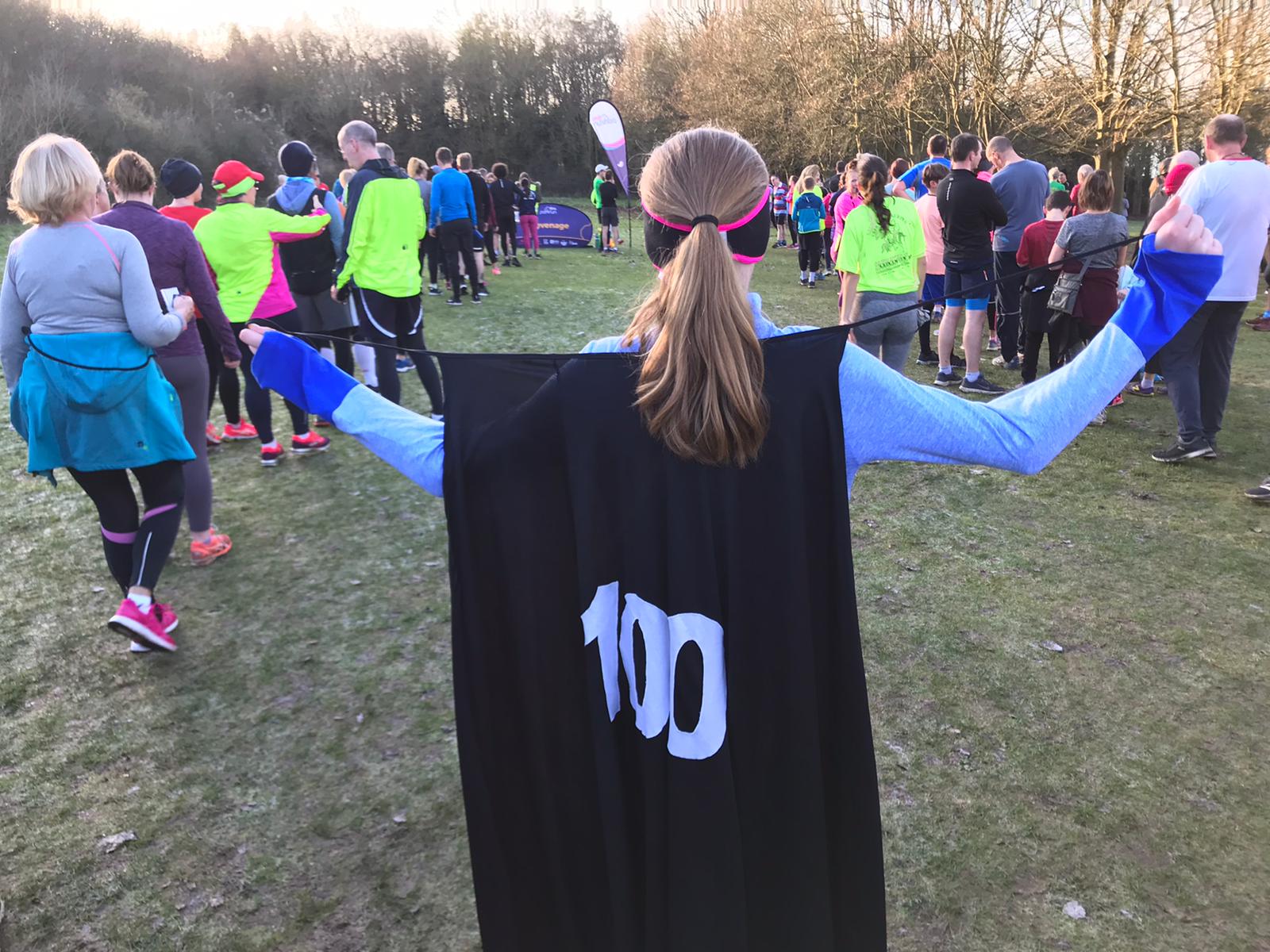 Our First Finishers were Sam Dear with 18:45 and for the ladies Jessica Earp finished with 21:00
Well done to all of you that ran, walked or jogged and had a laugh with us today.
I had lots of fun this morning and I hope you all did too!
Have a gorgeous weekend and keeeeep parkrunning!
Joanne
Edit: Many thanks to our volunteers without whom our continued success and growth in nimbers would not happen. Also many thanks to Joanne for her excellent report.
Tweet

Well the New Years Resolutions are well and truly up and running!   On Saturday we had a record attendance of 586 runners.  Truly remarkable and I think this parkrun thing might just catch on!

Of the 586 runners, 73 were first timers and 66 recorded new Personal Bests. Representatives of 36 different clubs took part.  We also had some brilliant milestones as well.  Ricky Sharman, Ella May-Hards, Sharon Anne Boxer, Claire Thrower and Sarah Kelly all completed their 50th parkruns.  Congratulations to all of them!

Our brilliant volunteers this week are:

Many thanks to all of them!

Please remember at the end of the run to please give back your finish token.  We only purchased them recently for a cost of £120.00 and we have already lost three tokens!

For the first Saturday run of 2020, the New Years resolutions to run and get fit were certainly evident.  We had 532 runners of which 56 were first timers and 72 recorded new Personal Bests.  532 is the 2nd highest attendance and only the second time we have had over 500 runners.

We are using new finish tokens, which cost £120.00 and were kindly bought through donations from runners.  We have already lost two tokens through runners taking them away.  Please don't take the tokens, they are not a souvenir and of no use outside of parkrun.

To manage such a large number of runners, we have a brilliant team of volunteers.  This week our brilliant stars are:

Happy New Year to everybody and see you Saturday!

So we have reached the last parkrun of the year and the decade.  The excitement and excess of Christmas is over for another year and we are in that weird lull when you don’t know what day it is.  Apart from parkrun day of course

What’s a year its been for Stevenage parkrun.  We’ve minded the bollards and powered up the hill at the end of the course.  January saw the tweaking of the start and the introduction of two “lanes” to ease congestion. Volunteers have come forward so that pacer events can be staged.  We’ve seen a plethora of milestone capes flying around the park.  Hundreds of photos have been taken and shared.  Christmas Day saw the attendance number record broken with 453 people.  Will NYD will see the record go again?

Gordon Cowan stepped down as Event Director and passed on the mantle to Richard Glaister.  Jason Root and Ken Jude stepped down as Race Directors and Helen Harris and David Scott took on a new parkrun volunteer role of RD.  Massive thanks to all the core team, past and present and all our volunteers.  There are lots of ways you can help so why not make a new year resolution to get involved.  Join the 519 people who have volunteered since this event began.  Email stevenage@parkrun.com or better still opt in using the link in your result email.

So to this week’s action.

It was a decidedly misty, grey, soggy and damp park that greeted the 383 participants at Fairlands Valley.  This week’s RD Laura announced that the course was “officially” diverted to avoid the muddy tree bit.

First lady was Alison Wood in 21:01.  Second lady to get watch click was first timer at Stevenage in her second ever parkrun was Holly Klimek in 22:22, then Charlotte Gibson in 22:34.

Congratulations and well done  to the magnificent 7 of Viv Lucas, Andy Wiseman, Matt Clarke, Hayley Stenning, Carolyn Parkinson, Helen Harris and Barry Game who all completed their 50th parkrun at Stevenage.  Extra mention to Helen Harris who is a regular volunteer at Stevenage and as mentioned before is now a race director.  Helen is doing her 150th volunteer stint on NYD.  Junior Alex Wasley also reached his milestone 10th run.

There were 49 new PBs and representatives of 35 different clubs took part.  60 people were first timers at Stevenage.  Happy New Year to you all and see you in 2020!

Well what else can I write about this Christmas day parkrun except WOW!! I thought we would get approx 350 runners for our 3rd Christmas Day parkrun hosted by yours truly. Well THAT figured proved no where near the final figure!! And how!!!

Near perfect weather resulted in the attendance record going along with us running out of finish tokens too!! [Don't worry we have the a brand new set ready to use on NYD and they go up to 600]. Previous course record set on NYD this year and was 441, now that figure is a stonking 453!!

It was fraught at times as we only had 2 scanner volunteers and long queues built up at the scanning points, so thanks all for your patience at the end.

We had 85 first timers and 48 people achieved PB's.

A great atmosphere was had all morning with plenty of people in fancy dress, oh I have to thank Caroline Musgrove for the Quality Street chocolates she donated.

Oh a couple of unpublished pics from the day below too. 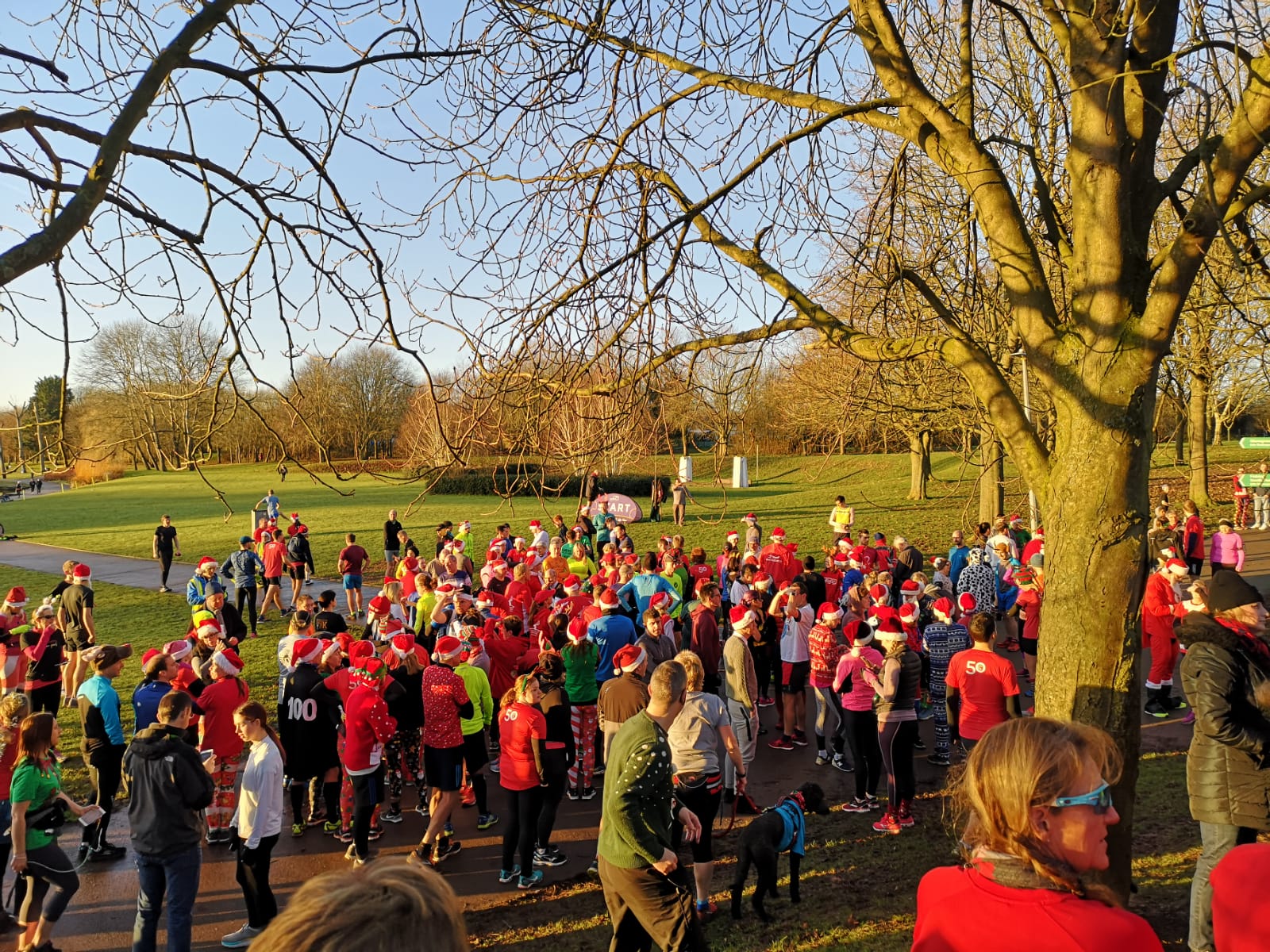 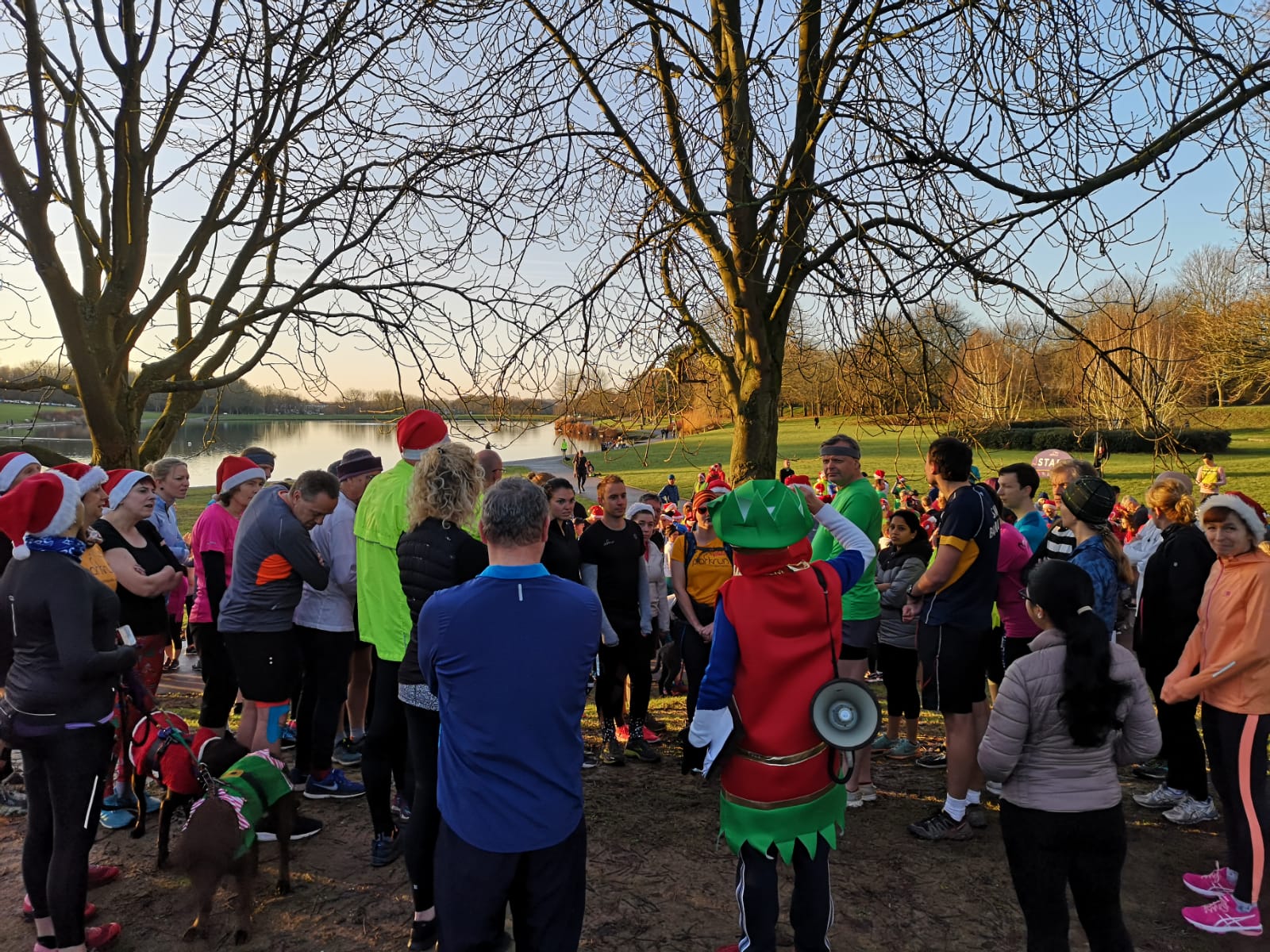 Our last parkrun before Christmas saw 302 people turn out in rather wet and muddy conditions to run, jog and walk the course. We had 24 first timers and 37 recorded new Personal Bests. Big pat on the back to all those who who took part, extra mince pies for you come Christmas day now! 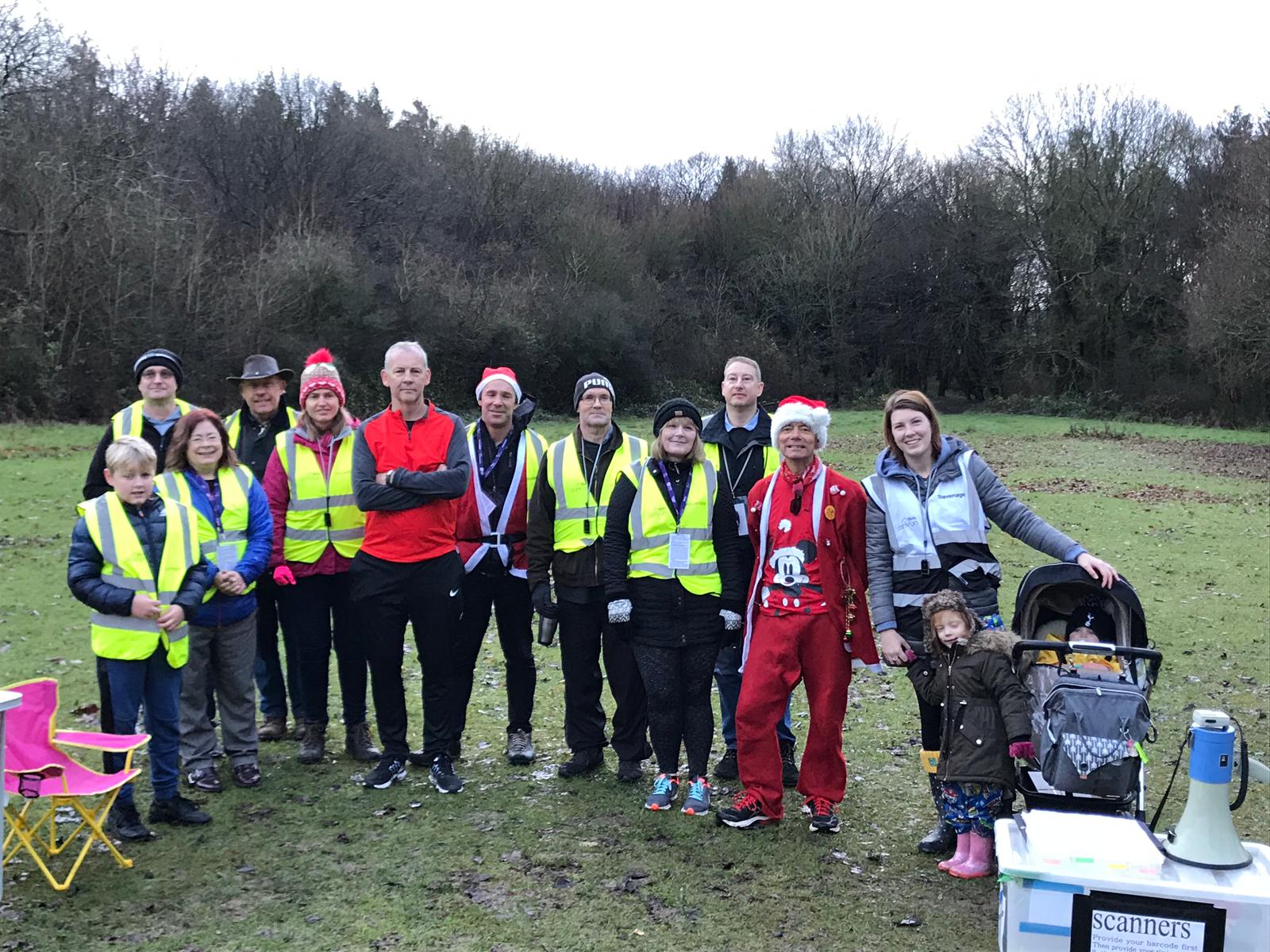 We had tourists from near and far- Letchworth, Norwich and South Africa! We hope you all enjoyed our course and will be back!

We saw a number of milestones being met yesterday- Carolyn Linsell ran her 100th parkrun, Debbie Blantern ran her 50th parkrun on her 50th birthday! (A lot of planning and logistics must've gone into that one!) And Wimpole tourst Steve Elliot donned our 50 Cape for his 50th run. Well done to you all! 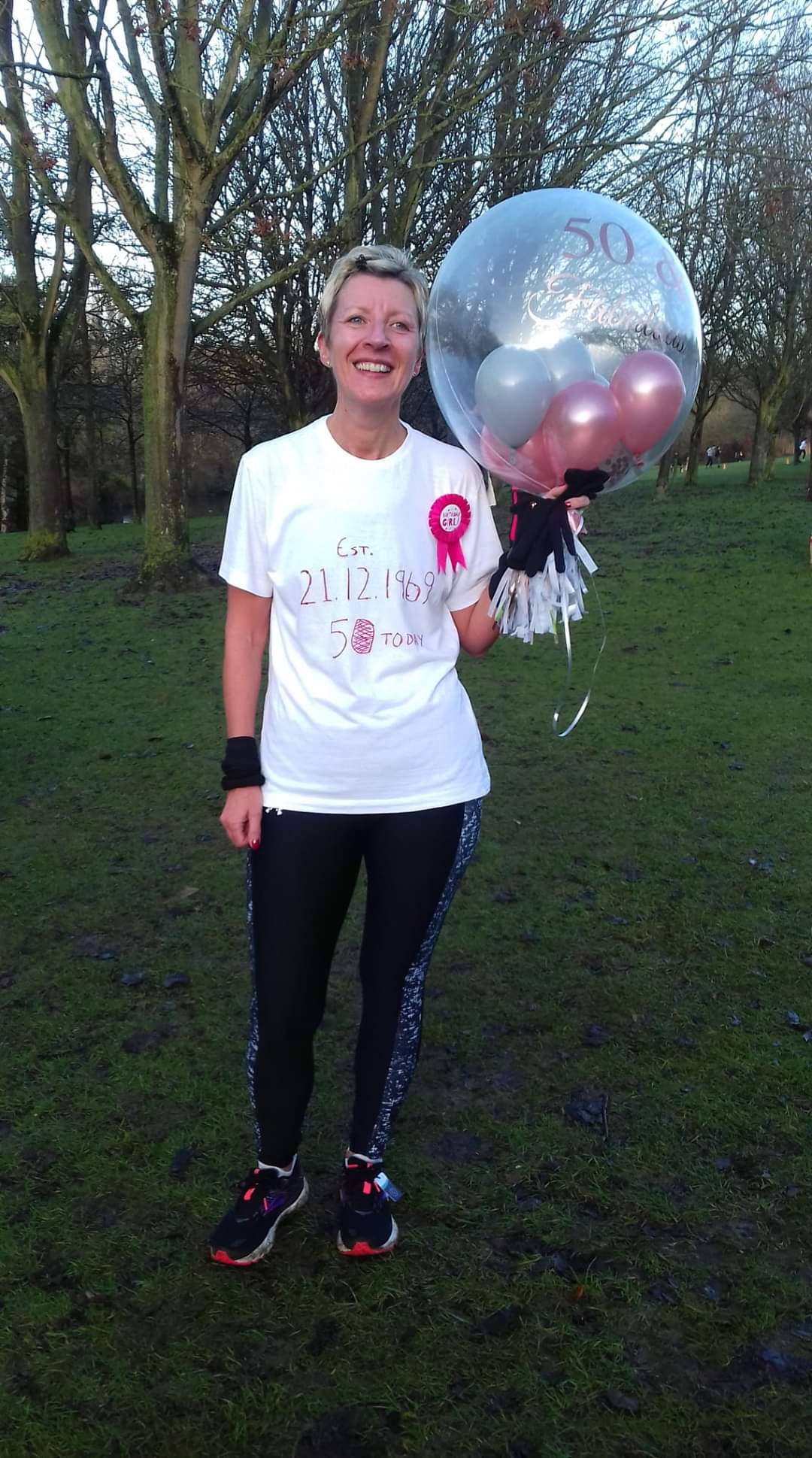 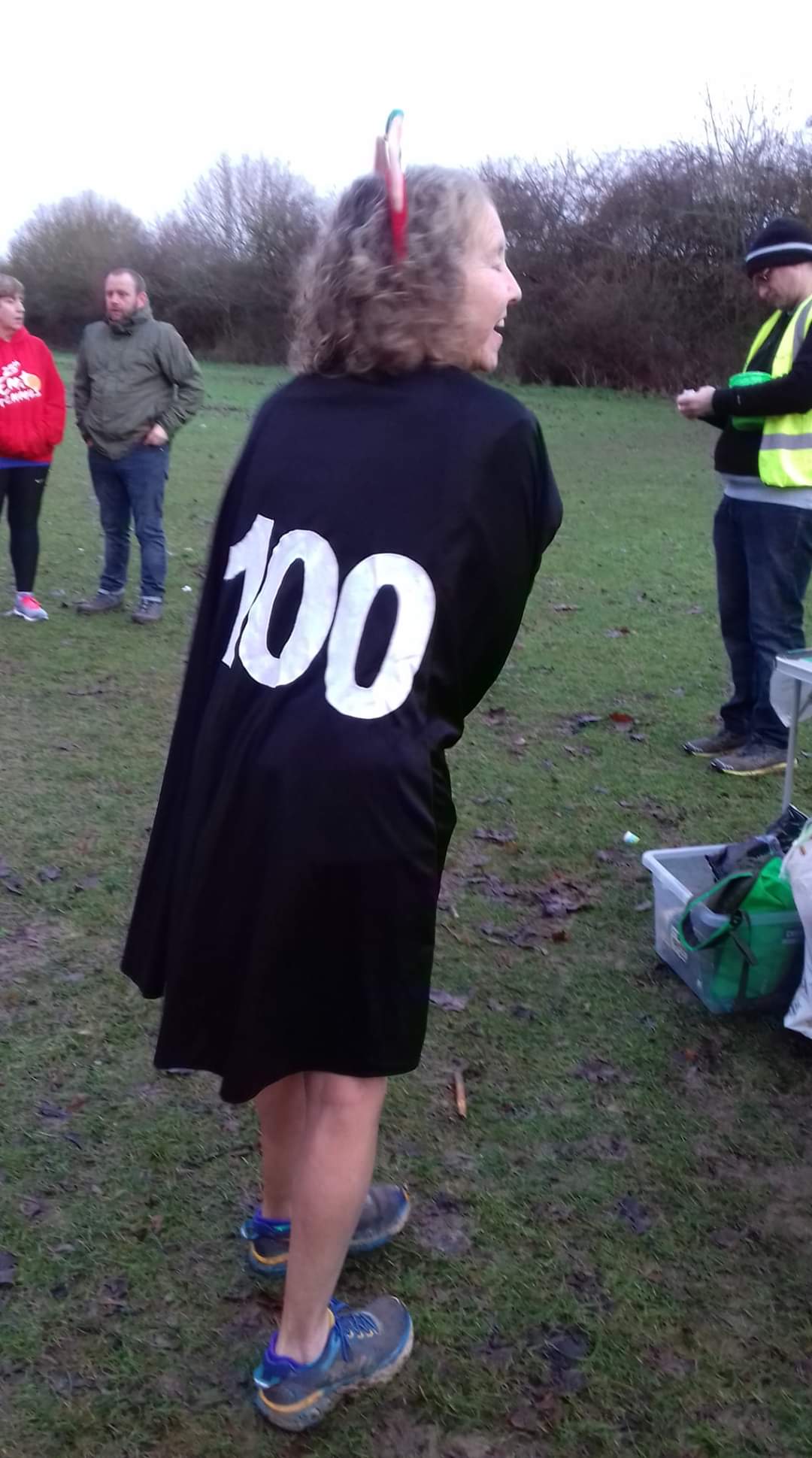 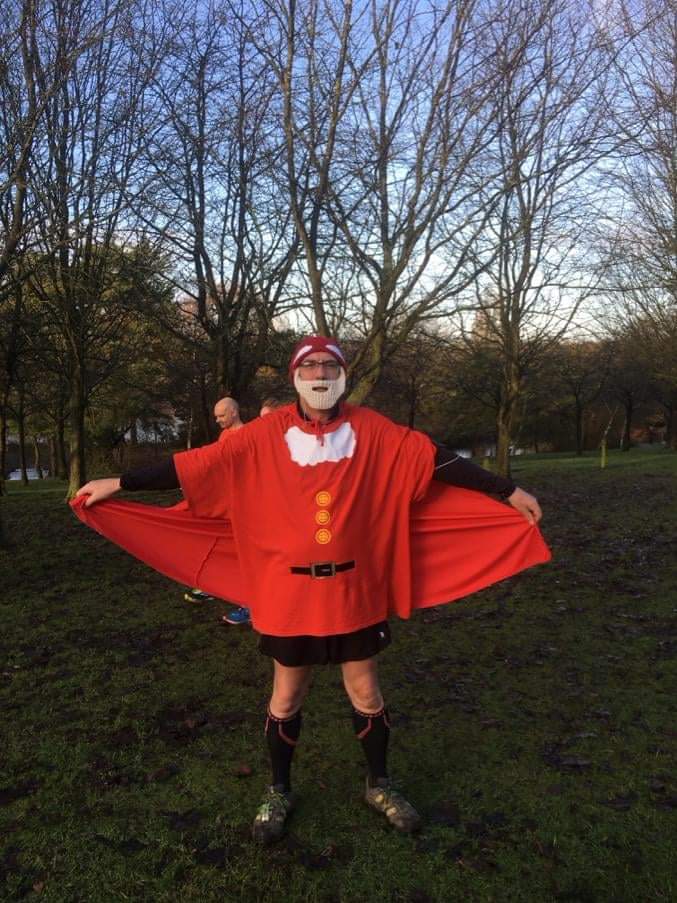 Remember we are holding a Christmas day run, the usual 9am start, dress up highly encouraged!

The mild December morning provided perfect conditions for the 304 people who ran, jogged and walked the beautiful course at Fairlands Valley Park. Twenty-two of the people were first timers and an impressive 46 recorded new Personal Bests. Representatives of 29 different clubs took part, and parkrun tourists came from nearby Letchworth and as far afield St Neots, Penzance, Billericay and Somerset. The tourist from Somerset, John Kennedy, was a former Stevenage parkrunner.

The event was made possible by 19 enthusiastic volunteers:

As the Tailwalker, April ensures that no one comes last!

If you are interested in volunteering for any of the roles, some of which can be combined with completing the event, simply email stevenagehelpers@parkrun.com.

On a related note, you may be interested to know that Paul Sinton-Hewett, the founder of parkrun was recently awarded the prestigious Albert Prize by the RSA for his building what has become a global participation movement.

You can read more about here and listen to Paul’s interview on the popular podcast for parkrunners ‘Freeweeklytimed’.

Have a great week and see you next Saturday when the parkrun Director will be David Scott.