C is for Concise

As I begin, sounding like a stuck record, bleating about brevity and keeping a long story/run report short, I remind myself of the blog of one of our first-time visitors and volunteers today. Louise Ayling, aka G. Louise Ayling according to her parkrun profile, writes a running blog under the pseudonym Abradypus. One of the standout elements to it that I enjoy is that Louise doesn't say any more than she has to and gets straight to the point. I believe the term 'Economy of Words' is best suited here. Writing enough to engage yet not too much to lose the reader. In an age where time seems like we don't have enough, yet probably have more of it in leisure terms than ever before, the audience needs to be able to digest, get out and get on with focussing on the other multiple distractions pervading their senses. Louise has this mastered. I do not. I will try to replicate.

Louise is one of the most frequent 5k parkrun tourists in all of parkrunworld. I have got to know her mostly through parkrun tourism and being at various venues at the same time over the years. Louise even helped me out once by jumping in last minute to co-host an episode of 'the parkrun show' podcast when my usual partner inconveniently decided to go into labour. It was a pleasant surprise to have her along. Also, whilst I remember, I still don't know what the G stands for in G. Louise. I will always insist it is Geez (pronounced jeez) until told the truth.

Louise primarily came along to meet up with another tourist, Vanessa Rayner, who had brought her two children, Alex and Helena, over to sample Surbiton juniors. Helena hadn't been awarded her blue half marathon wristband yet and I'm honoured to have been the one to present it today. Once upon a time, at a parkrun inaugural in Aylesbury, I awarded Vanessa with her 'parkrun 100 Club' jacket and tee. It all ties in together nicely in a historical way. Vanessa and Louise are friends I've made via parkrun, and whom I'd have never met were it not for the organisation's existence. It is this element that is key as to why we all gravitate back toward our weekend fix of a run in a park with friends; new, old and yet to have been made. Incidentally Vanessa is a native New Zealander and was talking a lot about a particular beer this morning. There are sadly a few empty cans of the stuff we have to litter pick on a Sunday pre-run, but I don't think she was talking about that. Vanessa, however, was holding and waving around a fluffy, brown cuddly toy. Maybe this is the beer being referred to? [ED note - I'm being cheeky] 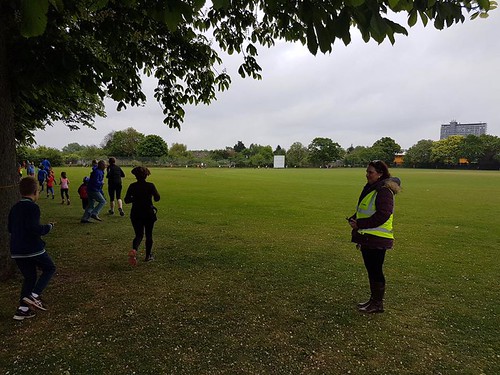 Quantifiable Data
Our event went pretty smoothly today all-in-all. We had our second highest attendance out of 87 runs with 137 junior finishers. We had a whopping 20 volunteers, three of whom were junior tail runners. We (well G. Louise) even counted how many adults were going around the course today. All 150+ junior events were tasked and asked by parkrun UK HQ to do this so we could get a general snapshot of how many adults are being physically active alongside their little amigos. Whilst we have the quantifiable data of juniors each week we don't really know how many adults are doing laps, lengths or circuits of parks around the UK each Sunday morning. We had 60 today, so 43.8% more feet than we would have normally accounted for. Extrapolate that in a non-scientific and very imprecise way over the UK by using last week's total of 14,468 junior runners and that equates to 6,337 adults. That's quite a sum.

Milestone wristband awarding happened too (as touched upon up in that fourth paragraph).
Taking home a blue half marathon wristband were Jasmine Bye, Angus O'Brien, Oscar Curtis and the aforementioned Helena Rayner.
The proud owners of a brand new orange marathon wristband are Megan Gerrard and Indy Lockyer. Bravo to you all.

No position tokens lost, volunteers thanked. Anything else? Oh yes. I put my hand up and admit it would be really helpful if I did tell poor Richard Hook, visiting from Nonsuch junior parkrun, where exactly it is that we host our warm up that he so kindly offered to take for us. Another lesson learned.

Danny Norman, Run Director on the day and Event Director