There will be an official parkrun on Christmas Day this year in Telford.

Timings will be confirmed within due course. Should you wish to volunteer please drop us an email at: telford@parkrun.com

At Telford, we are delighted to be one of the parkrun’s participating in the parkrun celebration of International Women’s Day, also supported by This Girl Can – which you may have seen on social media.

Of course everyone is welcome at parkrun – always!

There are many barriers that hold people back – as #ThisGirlCan has been highlighting.

So we invite you all to come along on 7th March 2020 for a parkrun celebrating female participation. Please do talk to the women and girls that you know about how great parkrun is, support them to overcome any worries that they have and come along, have fun and enjoy the friendly tea/coffee/cake at the end.

As you all know one of the fundamental principles of parkrun is that it is free for all, forever! However parkrun wouldn’t be possible without donations which help to purchase the kit needed for the events to function.

We know how important your results are to you and in recent weeks we have been having multiple issues relating to worn out and missing finish tokens and the 6.5 year old laptop we use to process your results. We urgently need to replace the laptop and purchase a new set of finish tokens.

We can’t do this without some much needed funds, so we are making a rare appeal to the Telford parkrun community to ask for donations so that we can continue to provide accurate results in a timely manner.
Whether you donate £1 or more, every bit will go towards keeping Telford running.

How to donate:
parkrun volunteers are not permitted to handle money, but there are two ways that you can provide funds which go directly towards helping the Telford event.
1. Online. From the “About Us” section of the Telford parkrun website click on the "donate to parkrun" button in the middle of the screen about half way down the page. https://www.parkrun.org.uk/telford/aboutus/
2. By cheque, please email: accounts@parkrun.com explaining that you intend to make a donation for Telford parkrun.
Thanks in advance for supporting all Telford parkrunners. 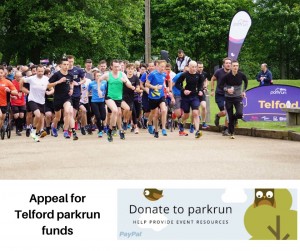 We look forward to seeing you

Due to an event in the park this weeks run has been cancelled by the event team. Please check www.parkrun.org.uk for other events

Well done to everyone who ran today results have been submitted after a major issue should be up soon . I will post the stats later. Remember parkrun riles on awesome volunteers so if you would like to drop us an email at telfordoffice@parkrun.com Thanks

Well done to all of you that ran today.

Fancy marshaling next week drop us an email at telfordoffice@parkrun.com Thanks .

Toady's run was a nice easy smooth run with no double crosser or one lap finishers well done . A big thanks to Newport Running Club for supplying this weeks volunteers . I will put this weeks stats up later well done Also Some good pictures appearing on our Flickr page

Big well done to all of you that ran toady .Thank you to all 232 runners. Hope to see you all next week . Here are the stats :

This week there were 232 runners, of whom 25 were first timers and 64 recorded new Personal Bests. Representatives of 17 different athletics clubs took part.

Telford parkrun started on 16th February 2013, and since then 2,860 different runners, including participants from 167 athletics clubs, have completed 14,871 runs covering a total distance of 74,355 km, and there have been 4,303 new Personal Bests.

Today's full results and a complete event history can be found on the Telford parkrun Results Page.

It was great to see so many people braving the cold weather at Telford Town Park this morning to take part in our 36th parkrun. Our numbers were swelled by some of Walsall Arboretum’s regular participants, including the Shabbarunners, whose winter tour started with a trip to us here this morning (secretly they were checking out the course for the Telford 10k in a couple of weeks time!)

One of the Shabbas has written their own blog on today's run, which can be found here if you're interested. Chilling (or should that be warming up) at the finish!

Given the frost and ice, a special mention to today’s volunteers, who had the unenviable task of standing around trying to keep warm whilst you were all running and the course marshall’s in particular who were quick to point out any parts of the course that were particularly slippy.

There are also some great photos of today’s run – check them out on the photo tab above. This week's fastest first-timer at Telford parkrun:
Darren REDMOND (SM35-39) (Unattached) was first over the line in 18:08. This run was Darren’s 28th parkrun, with all of his other runs taking place at Walsall Arboretum parkrun.

This week there were 187 runners, of whom 40 were first timers and 30 recorded new Personal Bests. Representatives of 15 different athletics clubs took part.

Telford parkrun started on 16th February 2013, and since then 1,431 different runners, including participants from 97 athletics clubs, have completed 6,023 runs covering a total distance of 30,115 km, and there have been 1,975 new Personal Bests.

Today's full results and a complete event history can be found on the Telford parkrun Results Page. Follow us on twitter here and on facebook here.