A lovely sunny Saturday at The Leas, Minster

I visited The Leas, Minster parkrun today for two reasons. Firstly to introduce my brother to the joys of parkrun and secondly, for me to do a bit of parkrun tourism, which I always enjoy. We were definitely not disappointed! On arrival in the car park I was greeted with beautiful views of the sea, then when we got to the start location we were warmly welcomed by all the friendly volunteers there.

The course itself is also a delight, not being the biggest fan of hills, I was very happy that we were able to just run along the beachfront which is pretty much flat all along apart from one little incline. In my opinion nothing beats running by the water so this was a complete winner for me.

79 runners attended event #66 at The Leas, there were 25 first timers with 4 people attending their first ever parkrun (hope you all enjoyed the experience and want to return)! Congratulations to the 15 runners who achieved a new pb and to Stephen McGlynn and Dean Savage on 25 parkruns and Jason Dighton on 50 - well done all!

Then at the end of the run we were reliably informed that the local pub was offering a ‘parkrun breakfast’ - I am not one to refuse a good post-run feed and so I took up the offer and tucked into a delicious sausage baguette. As we said goodbye to the volunteers we confirmed that we would definitely be back again. My brother doesn’t really have an excuse, he lives on the doorstep! I have a bit further to travel myself but it is definitely well worth a repeat visit. Thank you to everyone for a lovely morning and for all your hard work, without volunteers we wouldn’t be able to enjoy these events, it is much appreciated.

The Leas parkrun has been on the radar for some time and what a beautiful morning we picked. The Lees were joined by fellow parkrunners from Bexley and Tilgate and a number representing Vegan Runners.

After an informative First Time Briefing, the runners gathered and set off on a bracing two lap out and back along Minster promenade with a view across the estuary of Southend. 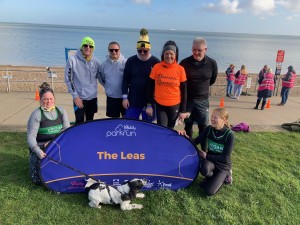 Photographs taken, we made our way back along the promenade for a nice breakfast at the Beach, which catered for vegans and was dog friendly. Taking advantage of the lovely weather, we headed to Leysdown for a walk along the beach and ice-cream.
Thanks to Wendy and her volunteer team for a friendly welcome and well marshalled course; a mention for Ben, a tourist volunteer. 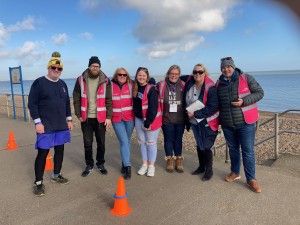 Unfortunately one of the marshals took a tumble from his bike before the event. I understand he went home and is ok, but I’m sure all the participants send him best wishes for a quick return to marshalling duties.

Thank you for letting me write today's run report.

Prior to considering this parkrun (which is my NENDY - Nearest Event Not Done Yet) the only time I had heard the name Sheppey was at our local fish and chip shop in the 1980's which alarmingly sold shepherds pies fried in batter called Sheppey burgers.

I have since researched a bit and found that the Isle of Sheppey dates back to the Bronze Age, was held by The Romans until they left around 400 AD. Around 675 the Anglo Saxon queen, Seaxburga founded a monastery for seventy seven nuns and built Minster Abbey.

Sheppey is apparently derived from Old English Sceapig, meaning "Sheep Island" (not a shepherds pie in batter) and the family names "Shippee" and "Shippey," found predominantly in New England, derives from those whose ancestors were from the Isle of Sheppey.

The population of the Isle of Sheppey is about 40,000 - 119 (including tourists) of which turned up for today's parkrun - number 49. (I really should have attended last week for my new Wilson number 48 but miscalculated)

So it was with lots of excitement and a little trepidation I turned up at 8.30 with my long suffering parkrunning wife and our English Setter Wellington. 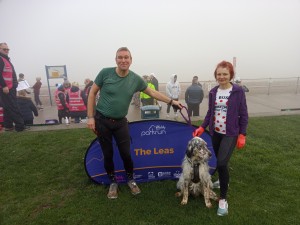 The car park was empty and gloomy but after a quick loo stop we met the team.The high viz heroes were already preparing the course and I was reassured that we would not get lost unless we ran into the sea or past Barton's point which is where a gun emplacementnt was built around 1889 - 1891, to defend the mouth of the River Medway from attack. 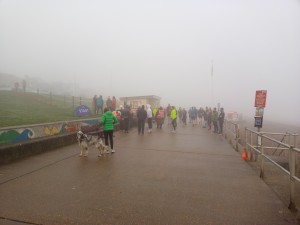 Soon we were off and everyone ran or walked into the mist. 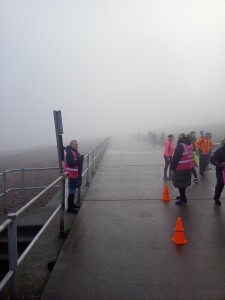 The course is two laps with a small hill on one side. Mercifully we were funnelled below it on the back lap otherwise it would have been up and down four times.

Peter HARRIS deserves a special mention for his time of 21.50 running in the 70-74 category with an age grade of 81.76%. Chapeau Peter, top effort.

After the run we met some of the marvelous volunteers - thanks to all of you for making this event happen.

A quick walk to the Beach Bar and Restaurant for a lovely vegan breakfast and a few dog treats for Wellington.

Thank you The Leas for a great time.

It's certainly been true for me.

Just to make all runners, joggers, walkers and volunteers aware, we will not be hosting parkrun on Christmas day, however we will be hosting a New Years Day parkrun.

Please get in touch if you would like to volunteer with us!

Following a series of relatively mild Saturday mornings through October and early November it was the arrival of Storm Arwen that brought that series to a dramatic end resulting in many parkrun cancellations across the UK either due to dangerous winds or snowfall. However although cold and very windy it was assessed safe enough for The Leas 43rd parkrun to go ahead making it possible for my first visit here.

I arrived to a nearby hotel late on Friday afternoon, the calm before the literal storm, and even witnessed a stunning full rainbow over the water as the weather started to turn but not before I had chance to buy an icecream (when in Rome and all that) and have a walk up and down the promenade.

Overnight the temperature dropped but thankfully stayed above freezing and the rain also stopped so braving the walk to the start in my shorts arrived early to introduce myself to the core team.   The warm welcome was just what I need to take my mind off the weather before having a quick jog with one of the other parkunners. It was soon clear we were going to be light in numbers but a hardy 31 of us made it to the start line.

The Leas is still a relatively new parkrun in event number although when the “great pause” is considered is actually over 2 years old and so in calmer conditions would probably see a steady stream of tourists visiting. Today though there were just 4 including myself, the others being Gary HOLFORD, Adam SHEPHARD and Mark PAYTON. There was also one person who was brand new to parkrun, what a day to arrive, so a special mention to Abigayle SHIPLEY. I don’t know if The Leas will become your home parkrun but do hope you enjoyed today and will come back to parkrun again, wherever it happens to be!

A special mention to Fiorina COCCIA who volunteered for the 25th time, like many previous weeks as barcode scanner, hopefully in a good pair of gloves this week!

Thank-you to you all and if you are reading this and want to get involved in future weeks then all details can be found at http://www.parkrun.org.uk/theleas/futureroster/. There many different roles to choose from.

On paper The Leas parkrun looks to be a flat fast course, an “out and mostly back, then out again and finally all the way back” kind of course!   In today’s conditions though it was definitely a game of two halves, or is that a game of four quarters!?   Heading away from the start was quite normal but turning around at the end cone was a very different situation altogether. It was then a case of trying your best to run or walk into the wind – anything to avoid going backwards! That said there were actually 3 new personal bests set – Neil FRANCIS, Ian TOWNSEND-BLAZIER and this morning’s youngest parkrunner Maddison TOWNSEND-BLAZIER.

First place finisher was Craig ROUSELL in a solid time of 21:28 with myself just behind in second place and Jamie PITTS in third. Today’s first female finisher was Julie HATT in a strong performance of 26:29 followed by Sally-Ann GALBRAITH in second and Wendy LANNING in third. First junior finisher was Cassius SEALE.

Congratulations to all of the above but absolutely to everyone who came along today and completed the course.

Full results can be found at http://www.parkrun.org.uk/theleas/results/latestresults/.

No attendance milestones today amongst our small number with our two juniors being the closest to theirs, in this case 10 parkruns, which hopefully will not be too far away.   At the top of the attendance table this week was aforementioned tourist Gary HOLFORD with 390 parkruns followed by regular visitor Paula FRANCIS on 377 (30 of them at The Leas).

Today’s parkrun finished with coffee at The Playa, across the road from the finish funnel, giving a chance to defrost and unwind (actually un-wind is more apt!).  Many thanks to The Leas parkrunners and especially the volunteers for a memorable morning and good luck for the weeks and months ahead!

Damian BAKER, a tourist from Daventry, signing off.