With the absence of the torrential rain and high winds of the last few weeks, we arrived at Tilgate park for our very special 410th event. I haven’t managed to undertake Run Director duties for so long that I was rather nervous today to see if I could remember what I was doing but thankfully Run Directing is like riding a bike (though with less falling over) and I was soon back into the swing of things. Mike ‘The Signs’ Brice and his able assistant Ant Weller had kindly completed the set up and even ran a quick loop to check the course condition before the start.

We had a marvelous 596 athletes today, 59 of those were first timers and a staggering 102 athletes scored PBs. We also welcomed the Reigate Priory Athletics Club and their Couch to 5k course graduates.

As always it was my pleasure to announce some milestones and our parkrunner of the month for February, Matt Palmer. Ian Price, Sam Frampton, Sarah Killick-Bird and Georgina Cave completed their 50th parkruns and Gary McMahon completed his 100th. Ant Weller also volunteered for the 50th time today. 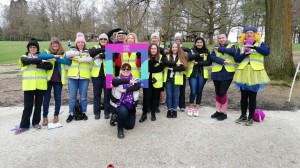 Now we cannot talk about parkrun without mentioning our volunteers, of which we had 43 today. These high-viz superheroes allow us to be able to stage Tilgate parkrun every week. This week however was a little different as the usual ‘call to arms’ volunteer email requested as many female heroes (sheroes if you like!) as possible to fill our roster. This was no sexist stunt by our VC, but due to today being the official International Women’s Day parkrun. For those unfamiliar with IWD, it has been celebrated since 1909 in the US, adopted globally in the 1970s and was designed to celebrate women’s achievements in social, economic, cultural and political arenas. parkrun is supporting this event in conjunction with the #ThisGirlCan campaign to encourage women’s participation in sport. Despite 54% of parkrun registrations being attributed to women, research shows that women are less likely to participate or continue to participate in parkrun events.

This got me thinking about the reasons why and what I was like at my first outing at parkrun 6 years ago. My reasons for not taking part initially were due to lack of confidence and worries about being too overweight or too slow or being last. IWD’s theme this year is #Each for Equal, trying to redress the gender balance across all walks of life. This got me thinking about women’s involvement in running in particular and I felt that lack of female engagement is certainly not due to lack of role models. Kathrine Switzer was the trailblazer for women’s marathon running when, in 1967, she became the first female to finish the Boston marathon as a numbered entrant. There was a little subterfuge on her part as she entered using her initials ‘K.V. Switzer’ and her defiance and determination paved the way for future generations of women to be allowed to run marathons. Closer to home, Jo Pavey is another tremendously strong role model in women’s running. At the age of 40, 10 months after giving birth to her second child, she won her first major gold in the 10,000m at the 2014 European championships. Today she was first female finisher at Exmouth parkrun in a blistering 16:57, as a 46 yr old mother of two – proving age is no barrier to speed! Last year we were lucky enough to have Dina Asher-Smith – 100m, 200m and 4x100m relay runner and fastest British woman on record, as an ambassador for Run Gatwick. These are just three of the multitude of athletes who inspire generations of women to take up sport every day.

It is their strength, grit and tenacity that has got them to where they are today and as role models for girls and women everywhere. So, to pinch a quote once cited by another inspirational human being, Michelle Obama: Here’s to strong women. May we know them. May we be them. May we raise them.