After a glorious few days of Indian summer, the weather forecast for today took a turn for the worse. It did, however, suggest that we might get safely through the morning before thunder storms in the afternoon. Although the sun did briefly put in an appearance during the pre-event setup, the sky soon began to look menacingly dark and with this in mind we sped swiftly through the warm-up and pre-run briefing. 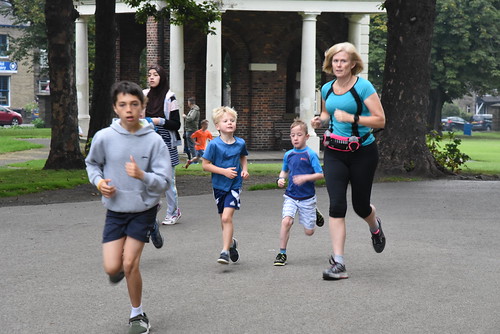 First finisher was Sophia Foulger and the first boy to finish (second finisher overall) was Mackenzie Colvin-Baxter. There were two new PB's to celebrate, set by Flynn Lambley and Erin Smith. Erin was also running her eleventh junior parkrun today, so there will be a half-marathon wristband for her next time.

Despite our initial optimism that we would get through the run before the rain arrived, the sky darkened dramatically as the runners embarked on their second big lap and as the first runners began to cross the finish line, a deluge of Biblical proportions descended on us, such that the event concluded with a thoroughly drenched set of volunteers, including the tail walker! 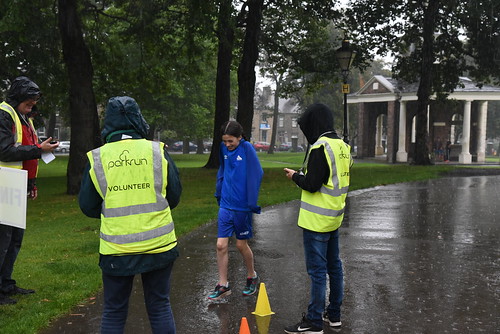 Just as we had a low turnout of runners today, so we were low on volunteers too. A massive thank you to those 17 people who stepped forward, some at the last moment, who enabled us to run the event. Thank you too to the Friends of Tolson and Ravensknowle for the welcome refreshments in the bowling green hut afterwards.

See you all next week - don't forget your barcode!