When is a parkrun not a run in a park?

The growth of parkrun has been phenomenal over the past few years, with about 1450 of them now taking place every week in 20 countries across the world. And from the name you would be forgiven for thinking that they all happen on land used for recreation, but this is often not the case. Over time, ‘parkrun’ has become an umbrella term for a series of volunteer-led 5k events taking place on Saturday morning. parkruns are often along the coast, either on a seaside path (such as Hove Promenade parkrun or Worthing parkrun in Sussex) or entirely on sand (such as Inch Beach parkrun and Portrush parkrun on the island of Ireland). There are parkruns with routes around an island (such as Hamilton Island parkrun in the Whitsundays in Australia and Elagin Ostrov parkrun in St Petersburg in Russia), and one of the latest additions to the London set, Victoria Dock parkrun, is run entirely on dockside paths. In addition, in November 2017 Black Combe parkrun became the first ever weekly 5k event within the grounds of a prison. On my travels this month, I have been to two other parkruns that are also not a run in a park. One is around a bay in a European capital, and the other is along the walls of an Italian city. 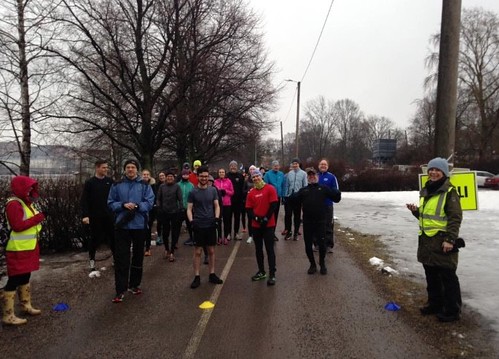 parkrun was first established in Finland in October of 2017 in the city of Tampere. Just under a year later, in late September 2018, the national capital Helsinki welcomed the country’s second parkrun. 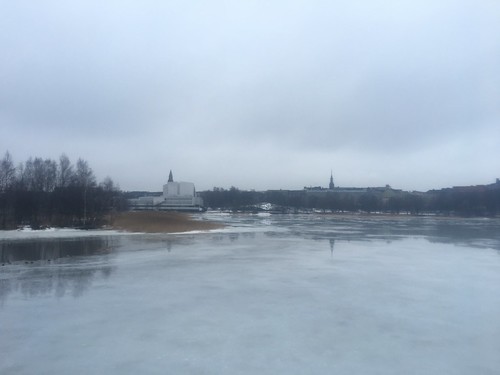 Töölönlahti Bay, with Finlandia Hall in the distance on the left

At around 20 minutes on foot from the main railway station, Tokoinranta parkrun is very easy to get to from the city centre. The course is an out and back, and the majority of the route is along the tarmac paths going around Töölönlahti Bay, a spot which is very popular with the local residents. Going round you are treated to views of Finlandia Hall, a striking marble-coloured congress and event venue designed by the famous Finnish architect Alvar Aalto, and the Finnish National Opera Hall. The turnaround point comes just after you have passed the latter building. The route round the bay and the start/finish stretch are both pancake flat. However, to get between the two you have to go up and over a railway bridge, and the climb up to the bridge is short and steep. It provides a real sting in the tail towards the end! 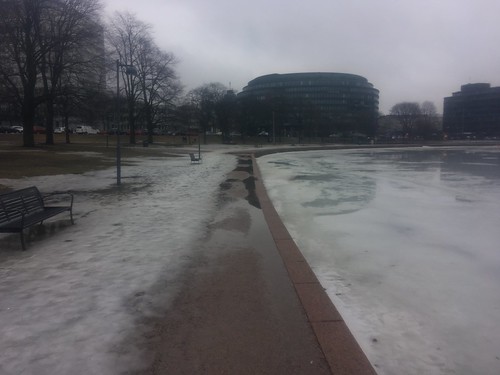 It is also worth noting that during the winter the location of the start/finish area can change. While the route around Töölönlahti Bay is usually free of ice, the path around the edge of Eläintarhanlahti Bay will often freeze over. This was the case when I visited, so the start/finish point moved to Kaisaniemenranta, on the other side of the bay. Finding the start is quite straightforward, though. The parkrun teardrop flag and event selfie frame are always placed out early, and if you can find them then you’ll know you’re in the right area! 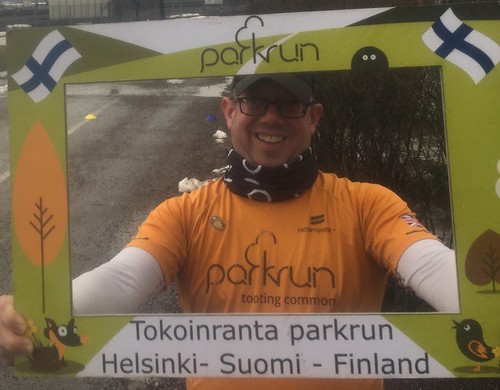 Tokoinranta parkrun is still quite a young event, and on my visit they attracted 28 participants – quite impressive given the cold and the grey skies. However, I can see it getting very popular during the summer and would heartily recommend giving it a go if you’re heading to Finland on holiday. Just be ready for the sting in the tail! 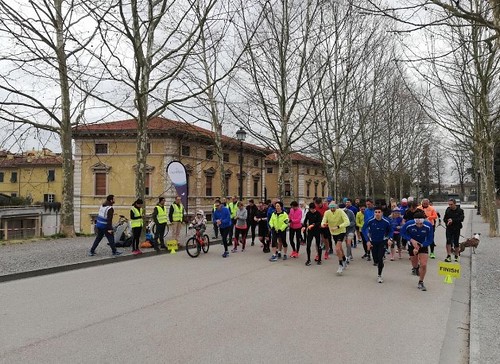 The weekend before my visit to Helsinki I headed to the other side of Europe and ran at Lucca in Italy. parkrun began in Italy in May 2015 with the launch of Uditore parkrun in Palermo and now boasts 16 events. Lucca is a town in Tuscany which is roughly hallway between Pisa and Florence. Lucca is renowned for its intact Renaissance-era city walls, which after they lost their military importance became a tree-lined pedestrian promenade. The route around the walls is 4.2 kilometres, and on 25 August 2018 it became the course for Mura di Lucca parkrun. 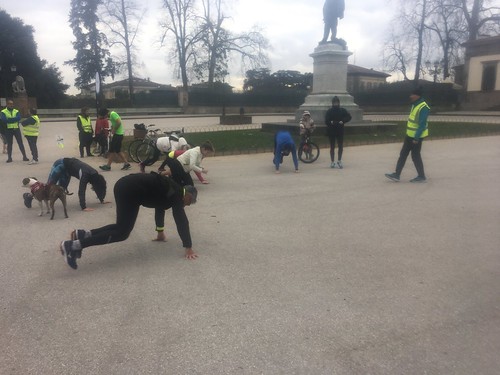 The start of the parkrun is on the southern side of the walls, near the Porta San Pietro. Getting up onto the walls couldn’t be easier; all you have to do is walk up a very gentle and wide tarmac slope. You’ll know you’re in the right place if you can see the Antico Caffe delle Mura building in front of you. If you get there for around 8:40 you can also take part in the legendary Mura di Lucca parkrun warm-up. It lasts for about 10 minutes, and they really put you through your paces with a wide range of exercises and dynamic stretches that will get your heart pumping! After the warm up, everyone heads a little way down the path for the start. The briefing is done in both Italian and English, and visitors are made to feel very welcome. 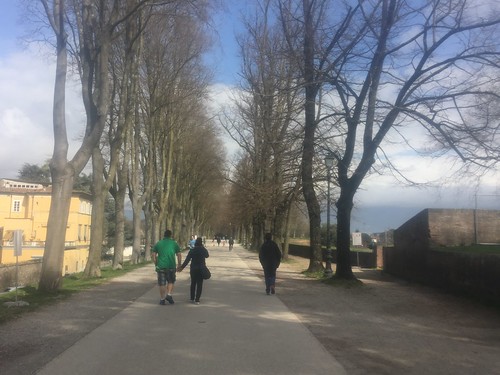 The route of Mura di Lucca parkrun is one anticlockwise lap of the walls, and to make up the extra 0.8 kilometres you begin by running in a clockwise direction towards a statue on the walls. You then go round the statue, return to where you started and begin the lap. Out of the 134 different parkruns I have been to, Mura di Lucca is definitely one of the most inspiring courses I have run; there is always something of interest to look at as you go round. To your left you can see everything you would expect to see in a Tuscan city – parks, gardens, churches, squares and the odd tower or two thrown in for good measure. And to your right you have beautiful views of the Tuscan countryside and the Apennine mountains in the distance. It really is as glorious a run as it sounds. 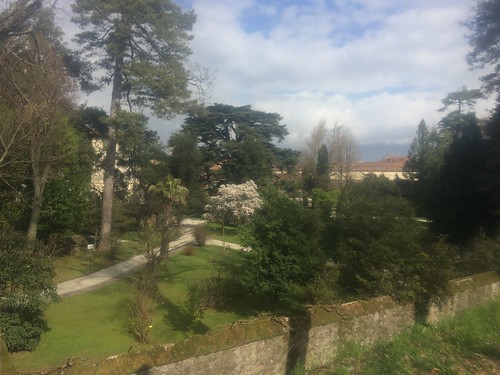 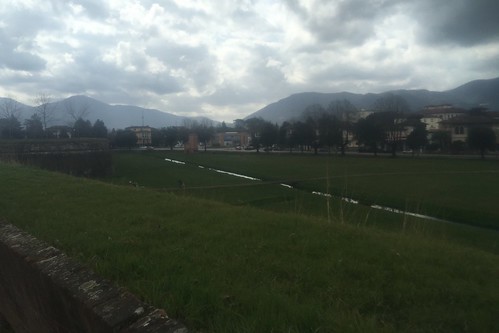 The course is pancake flat, and as it is almost all tarmac road shoes will be fine all year round here. The weather on the day when I visited was slightly overcast, which made for great running conditions. This, coupled with the inspiring views around the course, led to me running my best time this year. The slight nip in the air meant that there was a lower than usual attendance of 48 when I visited. However, this will be a very popular parkrun in the summer, and I can definitely see them breaking the attendance record of 124 (which was set at the inaugural) very soon. 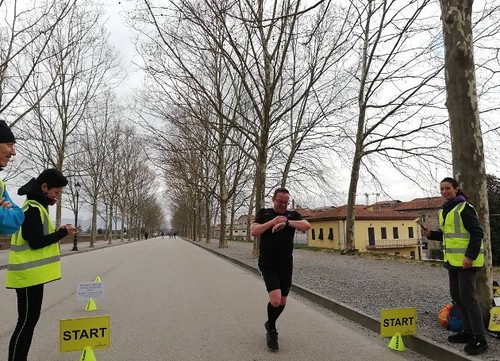 Mura di Lucca parkrun is definitely worth a go if you are in the area on holiday, though there are parkruns in nearby Terme and Florence which I'm sure are equally good. And as at Tokoinranta, the event selfie frame is well worth using too! I'd also heartily recommend exploring the maze of streets within the city walls after your run. See if you can find the tower with trees growing at the top! 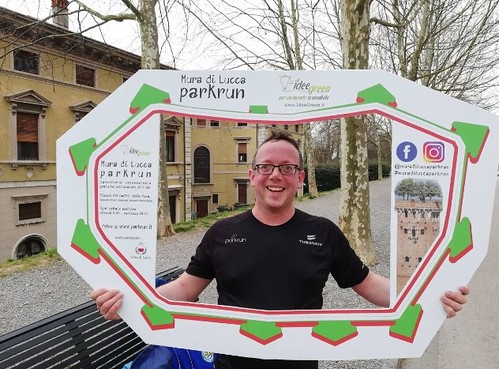 Also, if like me you are keen on running at parkruns in other countries then you might be interested to know that there is a new parkrun World Tourists group on Facebook. To become a member you need to have run at one parkrun in at least four of the (currently) 20 different countries that have parkruns. To join all you need to is click here and when prompted answer the question asking you which countries you have visited.

But what happened at Tooting? 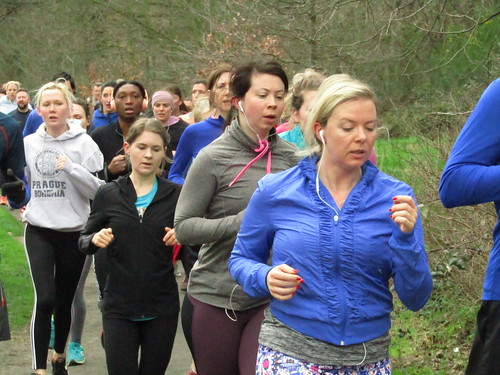 This week 636 people ran, jogged and walked the course, of whom 79 were first timers to Tooting and 31 were running their first ever parkrun. 61 recorded new Personal Bests, and representatives of 37 different clubs took part. 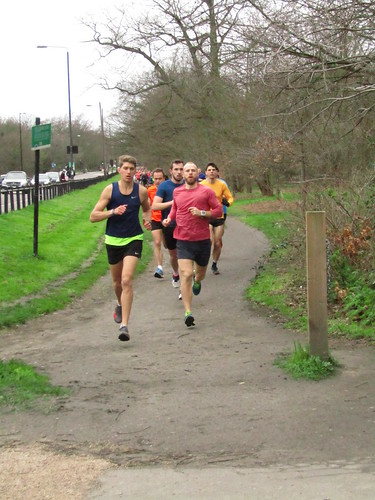 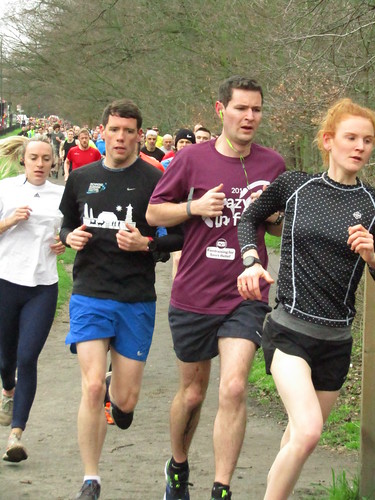 Congratulations to Stephanie Hellings, who ran her 50th parkrun with us today.

Aside from those mentioned above, other PBs of note today are as follows:

- Charlotte Lord continued her impressive recent form, crossing the line in 26:49 which is an improvement of 5 seconds on the time she set last month.

- Rizwan Hafiz recorded a new PB for the first time since last November, improving his time by 26 seconds to finish in 25:11.

- Julian Abbott, today’s most experienced parkrunner with 387 runs under his belt, returned to run with us for the first time since October 2016 and bettered the time he set then by a very impressive 4 minutes and 10 seconds to cross the line in 23:50. Welcome back, Julian!

Three cheers for the volunteers! 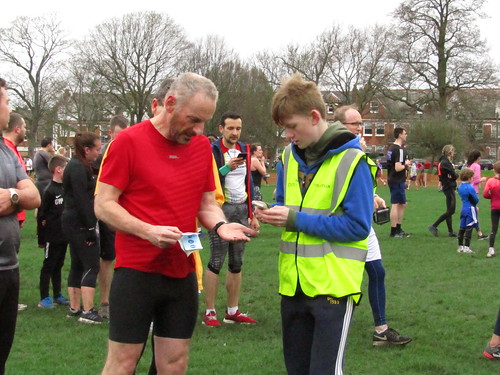 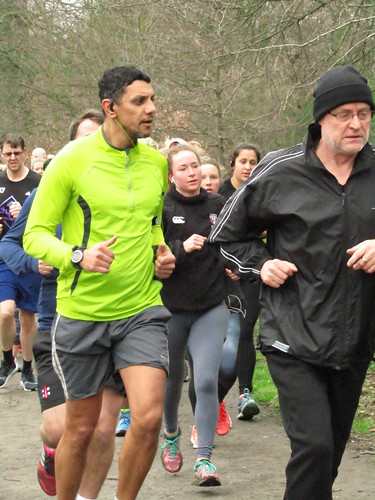 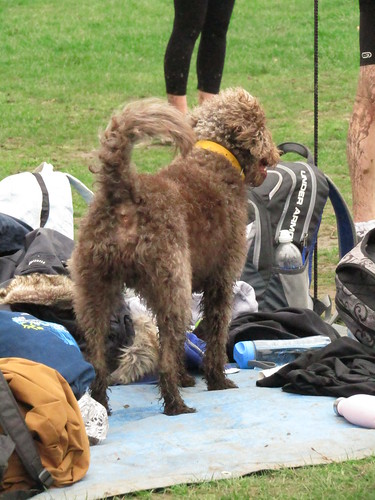 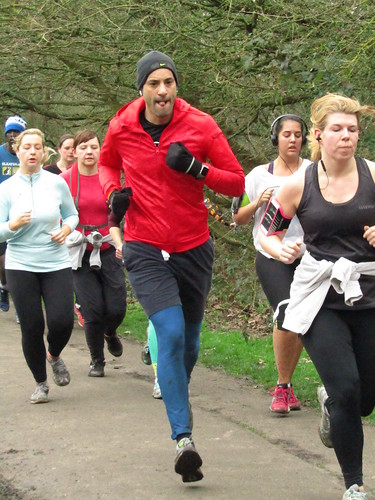