The sun shone, bringing out the midges, for this our third event over the new Trelissick Winter Course, which also brought out some interesting comments from the participants. A visitor from Bournemouth remarked that all Cornish courses were tough and that this was no exception – what do they expect? Particularly interesting, an oft repeated remark, that the almost constant meeting between contra-flowing runners on the T shaped out-and-back course (in plan) makes for great social greeting and mutual encouragement. The somewhat tricky layout gave employment today to seven marshals too.

My apologies as Run Director, to anyone who noticed, for the results being delayed, due to a software glitch that, meant sorting and manually deleting around 160 duplicate (and entirely bogus) results. I just hope it’s right!

Saturday 7th March was parkrun's celebration of International Women's Day (which is Sunday 8th March) and the This Girl Can campaign and also my 100th parkrun. There was no coincidence in my timing! I arrived armed with a 100 cake and a lovely 100 parkruns rosette, made by my husband!

We were encouraged to bring a female friend who'd never walked, jogged, run or volunteered at a parkrun and wear purple to mark the day. There were #ThisGirlCan t shirts and a fab selfie frame.

We had tourists from Kidderminster, Southampton and Lanhydrock to name a few.

This was the second week of running the new course as the field is having a rest, having taken a real battering during this particularly wet winter, and it consists of the same start and finish but two branches of out and back. This is great as you get to see lots of parkrunners for high fives, and in my case shouts of 'congratulations!', but also terrible for me as I struggle to recognise everyone's faces and remember their names in time as we pass! So apologies if I missed you or got your name wrong!

The new course requires quite a few extra marshals and, apparently, a cow bell at the bridge! As always, the marshals were cheery and very encouraging and we can never thank them enough for standing out in the cold letting us get on with our running!

A total of 220 people finished that hard uphill finish. Rebecca Stobart was first female home leading another 91 female finishers in (although there were probably some females in the 'unknown' finishers too).

As my friends know, I absolutely love parkrun. I think it's an amazing organisation which does so much for the physical and mental health of the UK and the world. Thank you for the 100! Only another 150 to go before my next milestone!

I also love stats and so here are mine: 100 parkruns at 23 different locations, including 55 at Trelissick and 47 volunteers in three years of parkrunning!

Well done to everyone who ran, jogged, walked and volunteered! You make parkrun what it is!

Many thanks to Chris for his run report today & congratulations on your 100th parkrun:

It is a great priveldge on my 100 th park run to be asked to write the report. In addition it is The only park run that will take place on February 29th until 2048 when I shall be in my late 60 s.

Having been part of Trelissick parkrun for the last three years it has become my new religion! It has shown me how amazing people are. From all that take part each week who would otherwise not be exercising ,to the amazing volunteers who make it all possible ! What I love about park run is the comaraderie!

Everyone is so encouraging. You can run at whatever pace you like and seeing the children running with their parents is just brilliant. A family highlight for us was running altogether on Christmas Day !

Huge thankyou for maki ng it all possible especially with the new course. I have been like a cat on a hot tin roof all week waiting for today (having been away for a few weeks then missing one due to the weather). Multiple texts about my fear over storm Jorge hitting us and Trelissick shutting fortunately did not happen and we all set off in the amazing surroundings that I believe make Trelissick one of the best parkruns !

Over fuelled with motivation from my friends that today I could get a new pb with no hill proved to be my downfall as I set off far too quickly thinking that we didn’t need to head off towards the field still !!

As ever it was a terrific morning and great to see so many taking part. The new course is similar to most runs with an out and back.

This week 208 people ran, jogged and walked the course, of whom 27 were first timers and 31 recorded new Personal Bests. Representatives of 18 different clubs took part.

Today's full results and a complete event history can be found on the Trelissick parkrun Results Page.

Big thanks to James Skeplorn for this week’s run report. He had a fantastic run and a well earned PB this week in 22:35. Fellow TRC runner Rob Standing (who has helped more than one or two of us to score a PB) got his 100 and probably would have been first finisher if he hadn’t taken a tumble coming down the field. But the first male finisher crown deservedly went to Tom Wright this week. First female finisher was Connie Rendell who runs in the JW10 category and impressed the marshals as she flew round the course.

It’s seriously muddy out there - please think about investing in some trail shoes if you don’t already have some and if you hope to remain upright.

They say that you should surround yourself with positive people, as positive energy is contagious; we'll there's no better place to achieve that than at your local parkrun on a Saturday morning and that's what I did when I attended parkrun ~167 at Trelissick. When starting to write this brief race report I had to check, and then check again, followed by one more check, that there were in fact 167 runners at event number 167 - really?! Amongst my parkrun comrades there were no less than 25 Trelissick first timers and 5 of those were first time parkrunners. Its even more impressive to me that the birthdays of these first timers spanned 7 decades - parkrun truly is available to all and an awesome event. Sienna Watson, Jo Carter, Tamsin Long, Jane Freer & Albert Rendell - well done on your fist parkruns and welcome. Also to Rob Standing, big respect on your 100th parkrun.

It was a fairly grey, dank and uninspiring day but bearing in mind the recent progression through the letters of the storm alphabet we knew it was going to be tricky underfoot especially when it came to the field incline so with my luggiest trail shoes on I left my family, including the mother-in-law who was telling me I must be mad to want to go and run in the wet and cold (they don't understand), at home and set off. When I arrived I had to check it was the right day; where was everyone? But steadily the numbers began to swell. Unfortunately Mark Taylor had brought his 100 best dad jokes joke book (what else would you bring to a parkrun...?) and had to try out some of his new material on us. Delights such as:

Luckily 9:50am came along to save us and the briefings commenced. I'd been nibbling away at my parkrun PB for the last few outings so if I wanted that to continue I thought I'd better go and actually try a bit of a warm up. The masses headed down to the starting area and without any delay we were off! I took up my usual position somewhere behind the leading group of speedsters but making reasonable progress but a guy ahead of me was having major shoe lace issues and ended up stopping to re-tie them 5 times during the run meaning he overtook me 5 times. When we finished I told him he surely would've come first if he could tie his shoelaces! This is a guy I know, called James from Nailsea near Bristol. I am also James originally from Nailsea near Bristol - more coincidences. After the easy bit came the main event - the field with a tricky slippy incline and on the way back down my descent can only be described as out of control. The way back was less technical and I just managed to continue my PB nibbling by a few seconds.

Once I was cheered over the line, it was then time for one of the best bits of every parkrun - cheering everyone else in and the genuine support and good will that is shown between fellow parkrunners. This is one of the parts of parkrun I enjoy the most - encouraging people who appreciate the encouragement and being encouraged by people who genuinely want you to do well. Once the debriefing has been completed it was time to head to the cafe for a much deserved cup of coffee and some delicious cake with friends to celebrate Cassi Bende's birthday, baked by Anne-Marie Moore, both of which were running. Happy birthday Cassi! Its just a shame we have to wait a week until the next Parkrunday, previously known as Saturday.

A fresh morning with sunny skies was the setting for Trelissick Parkrun #166. The drive down to Trelissick this morning reminded me that spring is on the way, with plenty of flowers popping out in the hedgerows. I’m looking forward to those lighter days and seeing the plants around Trelissick sprout into life.

199 runners took in the course this morning. We had visitors from Yorkshire, Gatwick and Leicester, and a Mr Mark Taylor from Truro!
It was a slow start for me, trying to make the most of the sunny weather before the storm arrives tomorrow. There is something about running along the river bank with glimpses through the trees of the river below - particularly when the tide is in. I feel truly lucky to be able to call this route my local Parkrun and am thankful to my other running friends for encouraging (and insisting) I come along to take part. I have certainly picked up the Parkrun bug (this was my 9th one, so I still have a long way to go to get to the milestones of some of my fellow runners).

Parkrun always sets me up for a Saturday. It is definitely the point that I look forward to, or maybe that's the promise of tea and cake at the end! It offers me a great opportunity to catch up with friends along the route. Whether they are marshals or fellow runners, it’s great to be a part of the community and say a quick hello and morning as we pass one another. I also enjoy the genuine encouragement and support from other runners. No matter what your background, Parkrun really does bring people together in such a positive way. I love that each week there is no pressure to run faster than the week before - you can run your own pace.

Thank you to all the marshals and volunteers that gave up their time this morning. If you would like to volunteer for a future Parkrun email trelissickhelpers@parkrun.com or check the Trelissick volunteer roster.

Thanks to Imogen Parnham for providing the Race report this week. 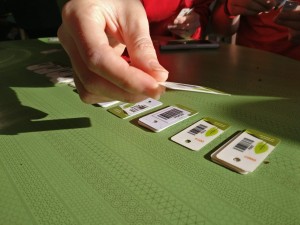