After a brief hiatus, next up in our series featuring our regular runners are father and son Phil and Noah Roger. During the first few years of Tring parkrun, Phil and Noah would often be seen running together. However, as is the way with these things, Noah can no longer be bothered to wait for Phil, and these days he can be seen waiting patiently for Phil at the finish line.

Phil moved to Berkhamsted over 30 years ago, which is where Noah was born. Phil and Noah both ran the Tring parkrun trial event in November 2014, and have been regulars runners at Tring ever since. Phil has now run 218 parkruns in total, including 191 at Tring, with a PB of 21:31 which he set as recently as March 2019. Noah has also run 218 parkruns in total, including 196 at Tring; Noah's PB is 22:04, also set in March 2019. At our 5th birthday awards in November 2019, Noah took first place in the male junior category, his 39 runs at Tring in our 5th year meant he had run more times than any other junior male. Up until 2019, Noah has been in the top 3 in each of the 5 years since Tring parkrun began, but never 1st. 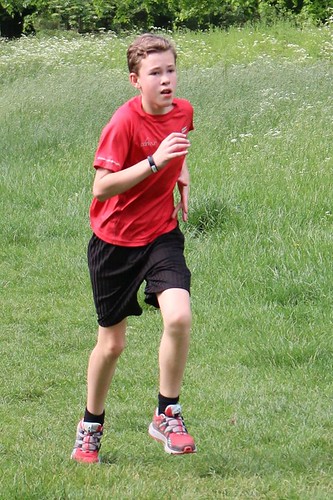 Noah in his younger days 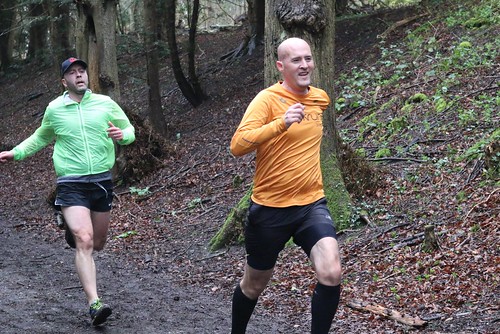 Other than parkrun, do you take part in any other organised running events?

Phil: My competitive running days are looking a little behind me now, I have done a number of marathons previously but I think half marathons are about my limit now.

Noah: Apart from parkrun, the only other running event I take part in is the annual Berkhamsted Fun Run in March. However, my attendance of that has been rather spotty in the last few years.

Given current restrictions, what are you doing to keep active?

Phil: The dog is currently keeping me active with a longish walk most days.

Noah: I am trying to run 10 kilometers on Tuesday and Thursday and 5 kilometers on Saturday. On Wednesday, Friday and Sunday, I am going for a dog walk – usually with my Dad – and on Monday, I go for a walk on my own via Tesco to pick up my lunch and snacks for the rest of the week.

What does Tring parkrun mean to you?

Phil: It's a great way to start the weekend, it gives me the opportunity to meet up with friends and family in a way that wouldn’t normally happen throughout the week.

Noah: Tring Parkrun has been something I have been doing since the trial run back in late 2014. Before this, I was occasionally doing St. Albans parkrun. Over this time, parkrun has took on many meanings for me. Some of these many reasons include:

1. It helps me relax after a week at school where I am almost constantly working – even during my Lunch Break – and before my Saturday project.

2. It is my weekend exercise. On Saturdays, when I work on my projects, I prefer to get my exercise out of the way so I don’t get interrupted as it ruins my flow of work. On Sundays, the only exercise I usually get is walking around to my neighbour where I have a piano lesson, which usually is after the rest of my family go on a dog walk, so I miss out on that walk. So in the end, it is my only real form of exercise during the weekend usually.

3. It is time I spend alone with my Dad. It is the only time in the week which I ever do that so this is something which is currently irreplaceable. 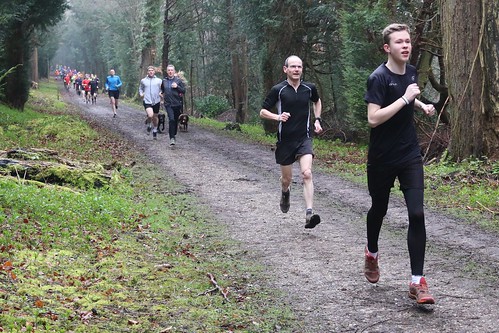 A more recent shot of Noah completing his weekend exercise

Why did you start parkrun?

Phil: I had previously run but we started attending parkruns to introduce an exercise routine for the kids. Not long after we had started a work colleague pointed me in Andy Evans' direction who was looking for runners to do the trial run at Tring ‘Parkrun 0’

Noah: I didn’t start parkrun by choice. I seem to remember my Dad forcing everyone in my family over to St. Albans when I was 10. I believe he tried to persuade me to not complain about it by promising to take us along to the Waffle Bar afterwards. Sadly for him, I don’t like Waffles. Consequently, the bribe did not work. Eventually, it became routine and formed into something else so running at Tring became not a problem for me.

Obviously Tring parkrun is your favourite parkrun, but what is your second favourite and why?

Phil: We have attended a relatively low number of different parkruns, but one of my objectives was always to go sub 20, for this reason I’d have to go for Cassiobury.

Noah: My second favourite parkrun would probably be Kings Lynn, Norfolk. I have only ran there once but it was sunny, ridiculously flat and not too warm. It also had a view of the station and I like trains so I got to see them go past. Consequently, it was my second favourite because, the only time I ran there, I really enjoyed it.

Taking any of our courses, what is your favourite bit of the Tring parkrun course and why?

Phil: I have always enjoyed trying to get through the old gate one on a wet and muddy day!

Noah: No matter what course it is, it will always be the downhill bits. This is because it gives me a brief moment of relief from the heat of the run.

Phil: I love tail walking, it gives me a great opportunity to get out with the dog but still enjoy the full parkrun experience.

Noah: My favourite volunteer role would oddly be Token Sorting. This is because I could test different sorting algorithms so it kept me intellectually occupied. Also, I got a free drink out of it from my Dad. However, as much as I would like to do that role again, I need to head back as soon as my Dad has completed his run because my brother has some football stuff he needs to do. 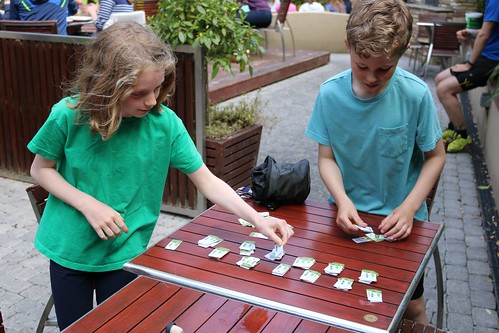 Noah undertaking his favourite volunteering role. As a parent of the child on the left the editor can confirm she is capable of disrupting any algorithm, however strong! 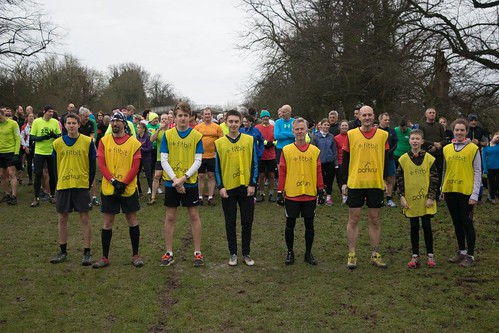 Phil: The recent wet weather meant that for one week only we had to start by the old gate 2. The number of bodies strewn across the floor over the first 200 meters was a site to behold.

Noah: My favourite parkrun memory would be when the cows decided that they would join in the run at the start, parallel to all of the runners. For some reason, I have always found animals imitating humans funny, even when it may be terrifying to others.

What parkrun would you like to do in the future and why?

Phil: Woolacombe Dunes looks right up there on the list of ones to complete.

Noah: Now the parkrun that I would like to do in future is called Penrhyn parkrun. First, I have heard it is good - it goes around some National Trust land with a castle, some points have a sea view and it is flat. Secondly, it is nearby to llanfairpwllgwyngyllgogerychwyrndrobwllllantysiliogogogoch - I want to get a picture of me next to the sign at the railway station.

Phil: I’m not the most organized in the mornings so a cup of tea generally does me!

Noah: Nice and simple. It is an Oatbix Flakes Cereal with an orange juice, a strawberry yoghurt and chocolate spread on wholemeal bread (not toast).

Have you ever done any of our fancy dress parkruns, and if so, what did you come dressed as?

Phil: The only ones I can remember were the Halloween parkruns. I still have my Hannibal Lector outfit somewhere. 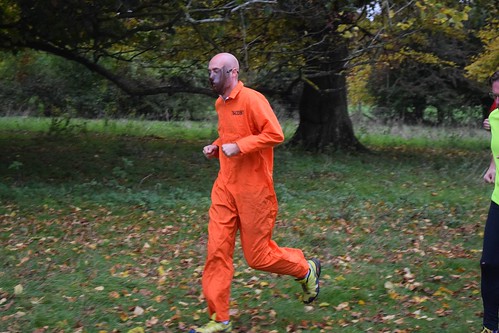 Noah: I don’t necessarily believe in fancy dress as it becomes too much of a hassle so consequently, I have not. 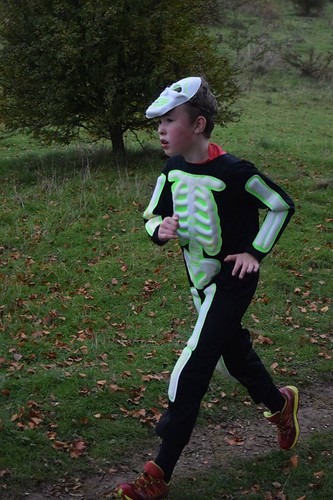 Did you forget, Noah? Tring parkrun has a very long memory!

Of the two of you, who is the most competitive?

Phil: Unfortunately Noah, this means I don’t have a chance of beating him again!

Noah: I believe we are equally competitive. However, it does not quite settle with my Dad when he loses to me in anything.

Although none of us admit it, we all target someone we want to beat. Who’s your target?

Phil: I’ve spent a large amount of my parkruns recovering from injuries so for me it’s always been a run against the clock rather than trying to beat individuals, having said that the first time you get beaten by one of the youngsters it does make you try that little bit harder the following week to try and keep up with them!

Noah: I have reached a stage now where I no longer have a consistent target, however difficult that is to believe. Now I pick on someone different at every parkrun once we get running and my goal will be to overtake that person by the end of the run. However, I do not know their names as I forget about them afterwards.

Do you think you’ll ever get another PB at Tring?

Phil: Probably not for me, I tend to manage a long standing back injury by running everyday. When I have run quickly at Tring it’s been off the back of running everyday for over a year so have been in pretty good running shape when I’ve done it.

Noah: Possibly. I have been getting faster and assuming that we are back by the end of summer, I may well get a PB. However, my 5K runs are getting slower because, outside of parkrun, I am starting to work on increasingly longer distances than 5K.