We're going to mix it up a bit this week. First of all we were hugely impressed by everyone's VE Day efforts and also the caption competition entries. (See below).

This weekend over the previous five years had their own significant moments too. So, let's start there and in reverse order...

Do you remember run number 247..... the one where the results went missing? The one when Andy Evans' detective agency was formed? The one where Ann-Marie's pretty brown eyes misted with emotion?? Yes/No??? 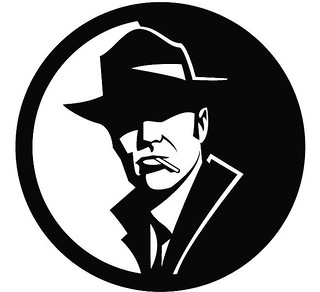 The dark and mysterious case of the missing runners

Here's how the story started..... "When I finally caught up with Andy, he was drinking strong coffee with a renegade RD named ‘Running Boy’ Collings in a ramshackle joint just off the A41, drinking the heart right out of a fine spring morning".

I'm not going to even summarise what happened next, follow the link to read the rest of "The Tring parkrun detective agency"

This was the first running of our "new" course, the version that did not start and end on the Lime tree Avenue.

Harry was RD and wrote "Essentially if everything goes well I don’t really have to do anything as Run Director, and on a day when we had a new herd of cows, a new route plus our fifth highest attendance ever it’s a testament to how great our volunteers are that I was able to wander around and chat to runners whilst everything seemed to tick over nicely. So, THANK YOU!" 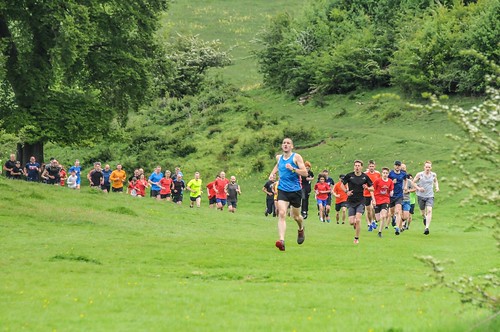 In fact had we ran this year, we'd also have had a new herd of cows to contend with. And perhaps the warm temperatures might have slowed the pace a little, but two years ago Chris Nicholls recorded his 7th PB in 7 weeks, Tia Kerr-Miller recorded 4 in 4 and Kelly Lane, Iain Middleton, Alice Fisher, Adrienne Garner, Anna Taylor, Simon Cowie, Rob Billings, Colin Hamnett, David Taylor, Gavin Morden and Callum Hunter-Whitehouse all had 2 PBs in 2 weeks. Better still Adrienne Garner chipped off some more time off her own 2nd best at VW70-74 and Betty Stracey recorded our 2nd best ever VW75-79.

Setting up a deja-vu moment two years later the run report noted that there were "gremlins" getting in the way of smooth result processing.

After the gremlins were zapped it became apparent that congratulations were due to those runners who reached impressive milestones that week, including Phil Roger and Daniel Wolff who ran their 100th parkruns and Juliet Mitchell who completed her 50th. Louise Bladen became the fourth person to complete 100 Tring parkruns. 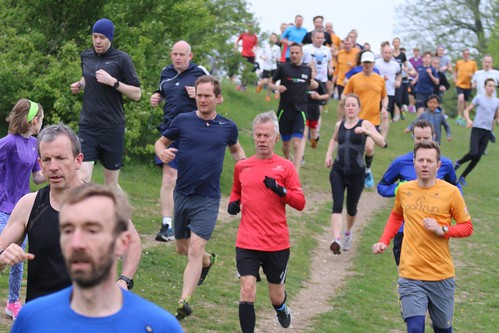 I was struck by this photo - taken with a telephoto lens everyone looks a lot closer than they really were....just like scurrilous press images taken with very, very long telephotos to claim mass "social distancing abuse"

Harry was delighted that after a dearth of candidates in recent weeks he could finally award a "most aesthetically pleasing time" award. "Not only did Linda Walke, Gareth Davies and Matt Wade all finish at precisely the same time, they also broke the thirty minute barrier and managed to match, to the second, our average run time. Bearing in mind we have now had 3,901 named runners this was quite a feat and I’m sure must have been pre-arranged! 29:59 to all three of you, all whilst carefully calculating the effect the 124 runners ahead of you would have on our average. Good work - you’ve made my day."

Just three years later our average time is now 30:27, which means that we are being successful in attracting a wider range of abilities in those joining to run/jog or walk.

"'He that will enjoy the brightness of sunshine, must quit the coolness of the shade.' Samuel Johnson" - is how this report started. Can you guess who the RD was?

You probably guessed Wes...but, no, it was our very own Mr Richard Murphy. 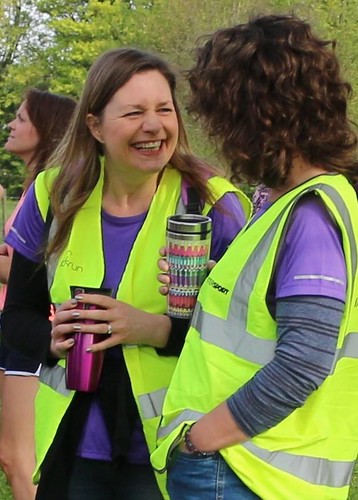 The following made me smile: "For the tourists the most travelled was David Irwin from Huntingdon who had just completed the Ridgeway Path with his wife. I think David also gets quote of the week, after hearing that the first 1k was mostly up hill in the pre run briefing delivered by Chris he expected the rest of the course to be flat ‘He told me only the first bit was uphill! There wasn’t a flat bit on the whole run!’. David has now completed 198 runs, I wonder if he’ll be back to Tring for his 200th?"

A quick bit of internet stalking shows that David is now at an amazing 355 parkruns and that he returned to Tring in June the following year...which must have been very close to his 250th.

Also that week Kirk Clifford completed the course in 19.36 setting a new Age Grade course record of 84.01%, a great achievement when you consider the nature of our course and that the benchmark is the World Record time for his age group (60-64 at the time).

"Whether you were celebrating or mourning, once again Tring parkrun was the perfect antidote on Saturday morning. With the weather, brisk and perhaps a little damp, any signs of hangovers were quickly cured...."

Ron Hull was RD (he's now ED for the lovely Rushmere parkrun) and noted that this was the first week that the women outnumbered the men, at 52%. In fact the female numbers have been consistently high or highest this weekend in previous years. I'm not sure why. 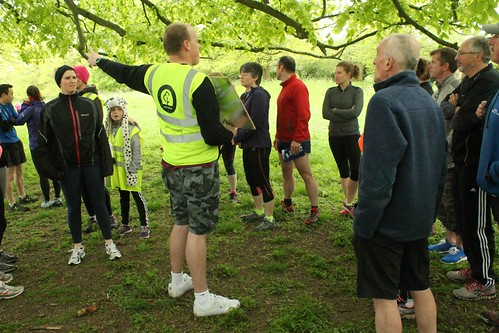 Chris Millar, a volunteer who has offered to be a RD (Run Director) has his 1st go at the new-runners brief. The new runners brief role involves following a fairly standard script and explaining the route, some of the rules and answering any questions. To be honest, if you have run a few times at Tring, don't mind talking to 10-20 people, can point into the far distance and make running up a hill into an amusing joke, then you're an ideal candidate for this role!

And one other notable snippet was "As everyone knows, parkrun is about giving it a go, improving, enjoying and making friends. This week welcomed first timers who had travelled from Sheffield, club outings (Leighton Buzzard) and 1st appearances from Fairland Spartans, Kilamarsh Kestrels and Team Trisports. Richard Murphy also achieved his 7th PB in 8 weeks."

The 75th anniversary of VE day was marked this weekend. It was odd seeing the socially distanced commemorations on the BBC, but oddly a virtual/non-parkrun week for us is becoming (sadly!?) a bit normal.

Virtual runs, virtual Akeman coffee mornings and seeing what everyone has come up with in response to Andy's weekly challenge have become one of the new things to look forward too.

WW2 was a challenging time for the world's population and Vera Lynn's "We'll meet again" became an iconic, poignant and symbolic song. It seemed equally fitting for our own circumstances and so we used it as the soundtrack to our own video remembering many happy days in Tring Park on Saturday mornings - and that we'll enjoy again together at some point in the future.

Red white and blue was what Andy asked for and that is what we got. "Leesten very carefully, I shall say thees only once..." - you were all fantastic! 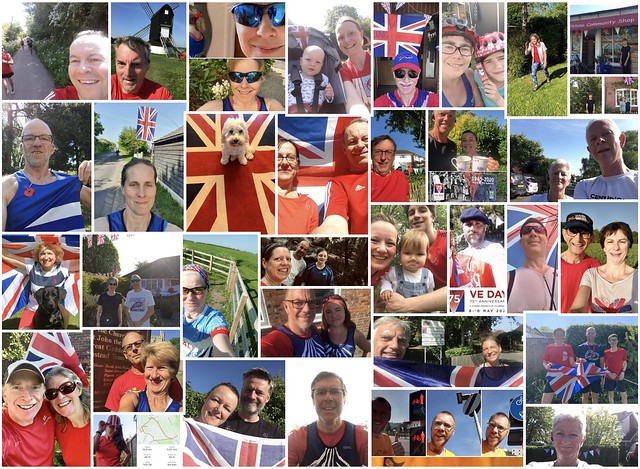 Superb effort by everyone yet again

I especially like Pencil sitting on a union flag and also RD Anna/Ross' daughter Jessica (see below).

This week we also had yet another "getting to know you" interview with a regular parkrunner. Many thanks to Steve Bladen for doing these. This week the victim celebrity was the legend that is Jim Maple aka the Musical Marshal.

If you've not seen it yet you can find it here. It include links to a few of the videos of Jim in action and his inspired playlists.

Also we had a great excuse for a caption competition. This proved challenging as noted by Moira Douglas, who said, "Problem is whatever Jim said to Anna will not be repeatable!"

The winning entry was "Jim said “Anna, I have a dream that one day the parkrun course will move away from these treasured trees and the grasslands and simply run up and down the hill between Nell Gwynne’s monument and the summerhouse, so that runners can enjoy my playlist every step of the way. I have a dream today.” - well done to Julian Crane.

Just to mix it up a bit: 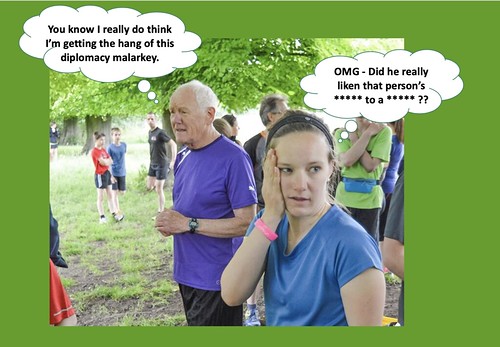 We also had a bonus caption competition featuring little Jessica: 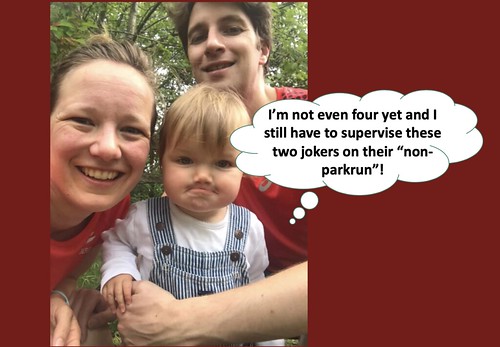 So that's it for this week.

If we still haven't fulfilled your need for a weekly parkrun fix try "With Me Now" hosted by Danny Norman and Nicola Forwood, a really great, independent, parkrun podcast.