There is only one correct answer, "treat", of course. We have a bumper double week issue, we explore time and halloween, we have spooky (and real!) local tales of witchcraft and murder, we have a spooktacular look-back, we have (not) parkrun, AND a few words about our sixth birthday and how you can help.

Time for a virtual parkrun

It's getting a bit more challenging to get out for a run these days. It's colder, darker, wetter, there is no end to all this miserable Covid situation and, to make matters worse, we had to put our clocks back and endure an extra hour of 2020. To brighten things up and act as a bit of an incentive our 32nd virtual parkrun had the theme of time or, more specifically, "Clocks, Watches, Egg Timers and Sundials".

It was a great excuse to invent routes that passed church and school clocks in and around Tring, Northchurch and Pitstone, and the Leybournes were out clock spotting in Cornwall.

Gio and Pencil both got in on the act again with Gio checking out the marshal point at the old "Gate 2" and Pencil was keeping a keen eye a Felix looking cat clock.

Lee Robinson had his eye on his Garmin, and was pleased to finish his virtual 5k in less than 30 minutes after a wee injury.

Top marks for powers of observation go to Louise Brooks who spotted an appropriately named Beach Hut on her virtual tourist parkrun at Lowestoft; and to Lucy Brittain (and Dan's Hareem) for cleverly homing-in on Dark Lane (as it will be getting dark an hour earlier now); and to Martin Bishop who spotted "Sundial Cottage" on his virtual run around local villages. 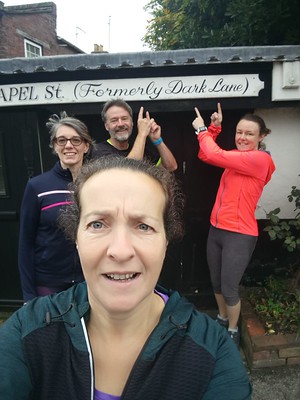 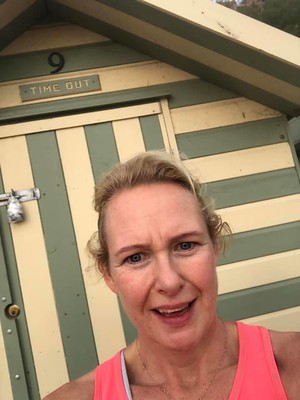 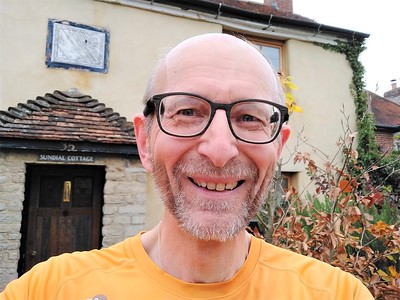 Great job by everyone! 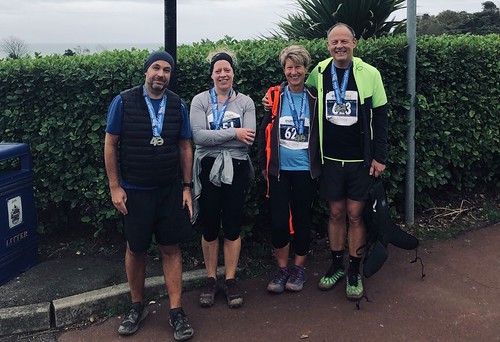 And a very special mention for several of our regular parkrunners who stepped up their Saturday morning virtual 5k a few levels, by running more than eight times that distance on the challenging Beachy Head Marathon. Congratulations to Louise and Stave Bladen, Carole and Stuart Page, Helen Tullie and to Lynda Hembury. Lynda was the first female in the 55+ category, 2nd if you take into account those over 45 and 14th female overall. Great running.

One of our most popular special events is Halloween and so there was no doubt about the theme as October came to an end.

We had a surprisingly good costume effort, although it has to be said no one was seen running along Tring High Street or through Tring Park dressed in something outrageous. There was no doubt that Blaz would pitch in with a good effort and Andy Evans too dug deep in the Snapchat filter locker. Pencil was going for a scary, vampire, Count Drac' look - but failed miserably! 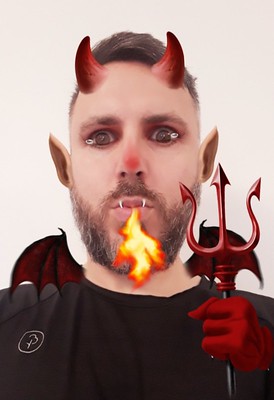 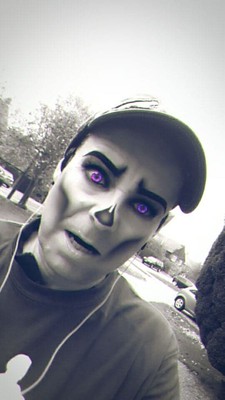 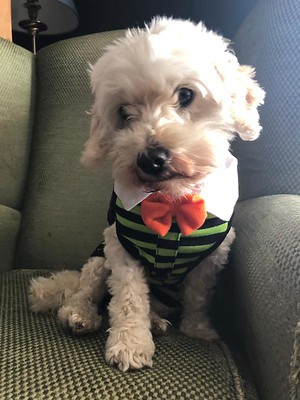 Like the week before we had a several virtual parkrunners go on to add a lot more kms than the required five. Dave Cary terrified Marsworth as part of his 10k route, Lucy Clutton ran her first ever Half Marathon (in very poor conditions) and Giles Monks also clocked up the 20k+ of a Half Marathon. Well done to all. 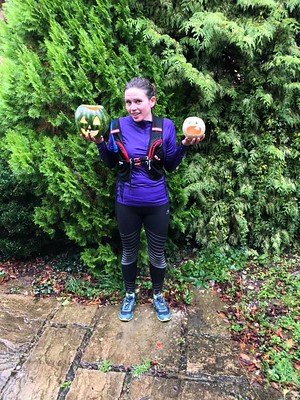 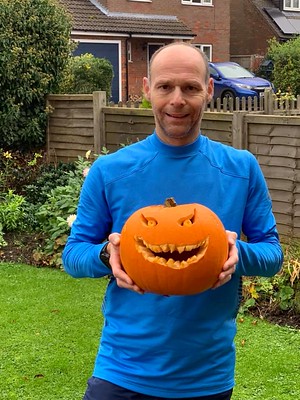 Well done to our Half Marathoners

Other notable efforts include Dan's Hareem visiting Hang Lane (the olden days were harsh times), Claire Hallessey treated herself to pumpkin pancakes (which are new to me and sound very yummy) with the bonus that the pic she submitted with three pancakes in a pan looked like a radioactive warning sign!

Stuart and Carole Page completed their personal virtual alphabet challenge with a run up to the Zoo. I'm sure they never guessed they'd get to letter Z when lockdown started and here we are going into Lockdown 2!

Judy Ewart deserves special kudos for her costume and for covering 10km in Ashridge dressed in it. We're very impressed. 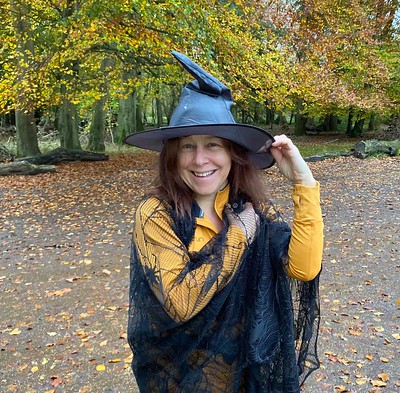 Judy dressed as a witch, but not in the least witch like!

A strong virtual parkrun first finisher this week was John Manning who achieved an impressive and spooky treble whammy: a virtual run outside of Tring; a ghastly, true witch/ghost story and a link to a popular local beer!!! We are seriously impressed.

John's route took him down Lukes Lane, between Tring and Long Marston - the scene of the outrageous murder of a poor, old and frail local woman accused of being a witch, and also the scene where her killer was hung and his decaying remains left swinging in a gibbet for months afterwards. It was the last recorded witch related death in England (see here for the sad and sorry story). The confession of the witch hunting murderer - one Thomas Colley - says something of the mixed feelings at the time. Many locals still believed in witches and, although illegal by then, did not condemn the persecution and ducking that led to her death. 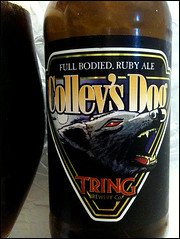 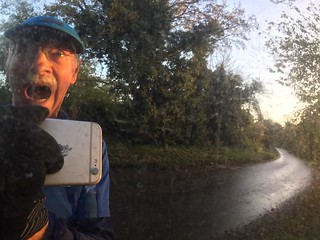 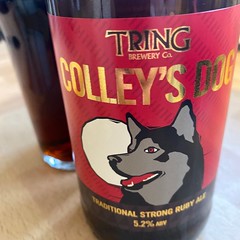 It is telling that local tales tell of the ghost of the hung Thomas Colley roaming the lane and not that of poor Ruth Osborn - who, frankly, had better reason to be aggrieved. The ghost takes the form of an evil looking black dog - "Colley's Dog" - that also gives its name of one of Tring Brewery's most popular beers.

Delving back into previous Halloween parkrun reports we found these great photos: 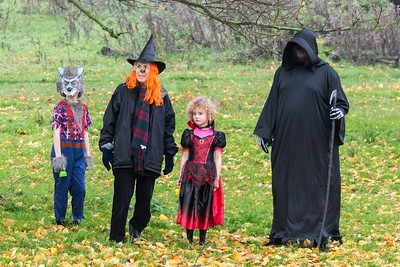 2015: The Tullie family supporting everyone on the finish line 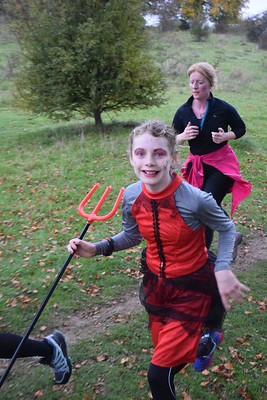 2016: Isobel on her way to leading the points table (remember those?) for that year. 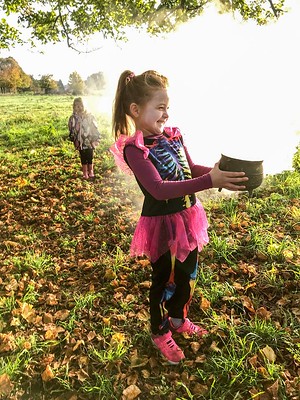 2017: Hubble bubble - one of or favourite Halloween parkrun photos 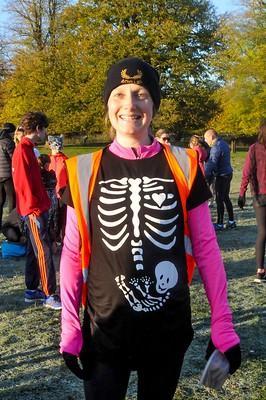 2018: Love this - Claire chose a brilliant way to let us known that a little Hallessey was on the way 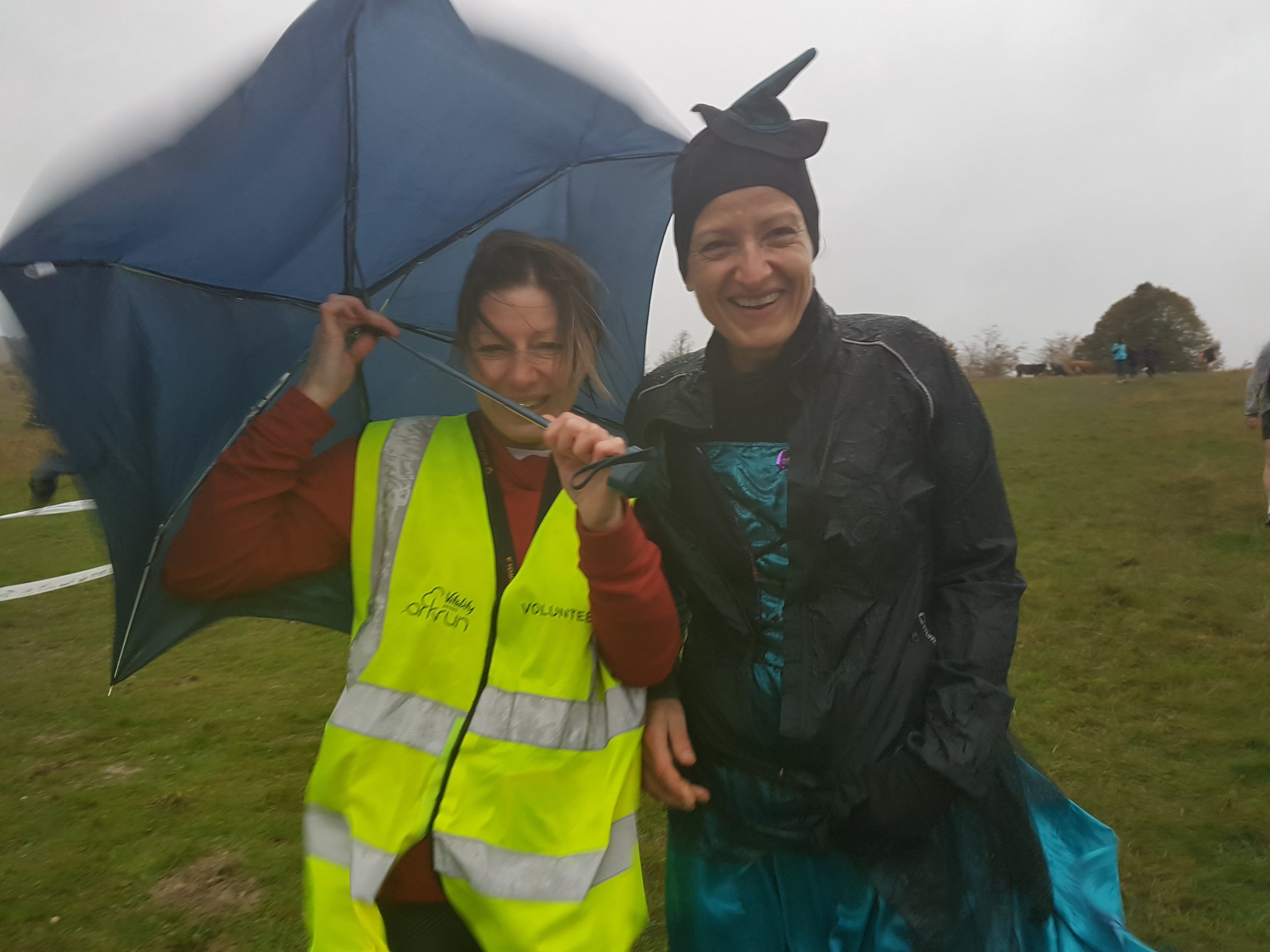 2019: It wasn't a very nice day last year (like this year) but still we had smiles

During Halloween week we had the highest number of PBs for some time. Perhaps this is because it's getting cooler? Kudos to Lucy Clutton, Damien Fortune, Angela Hollands, Andy Evans and Greg Leff.

There was a shock at the speedy end of the results table - Harry Bryant was knocked off the podium by Samuel Meldrum, Paul Myatt and Damien Fortune.

Taking age% into account didn't (unusually) change the top spots but a very consistent Kay Ison took the "bronze" slot, with a nicely symmetrical time of 30:30.

For the first time ever we had a virtual (not)parkrun simultaneous line-crossing, Dave Cary and Lee Robinson both posted times of 29:09.

REMEMBER - we want to seems many (not)parkrun times this (birthday) week as possible. To do so visit your parkrun profile page or follow the link at the foot of the results page.

Remember this week and out sixth birthday

We can't wait to get back together again.

This weekend we'll look back over the years. What are your favourite memories? Let us know.

We typically have the most amazing birthday cakes and so, in the spirit of the Bake Off, why not bake and/or decorate your own and let us see what you've created. We'll have a virtual birthday cake munch!

In the meantime stay well - and do that (not)parkrun!