Two for the price of one

Our sixth birthday celebrations reminded us all that we really did get out, in Tring Park, all together, right through to the end of March. Congratulations to all of those who earned medals and certificates from those distant days and also to those who were awarded prizes for outstanding virtual parkrun and (not)parkrun participation.

This week we look back on the previous two virtual parkruns and (not)parkruns, and we also look back at one very special and memorable event from this period in years gone by. 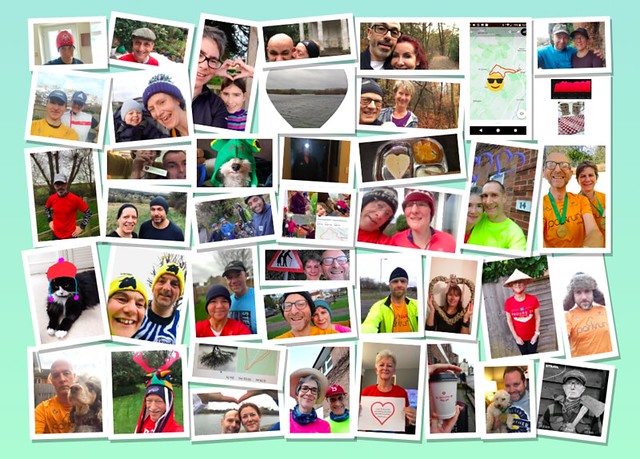 To celebrate "World Kindess Day" (no, I hadn't heard of it either...but we need a bit more of it and so I'm all in favour) the theme for Saturday the 14th Nov was, well, "Love and Kindness"

And what a warn and soft hearted lot we all proved to be. We had a huge response to this theme. It was especially heartwarming to see Lee Robinson thank parter Nicky Summers for encouraging him to start running 5 years ago, and likewise Angela Hollands thanked husband Graham for his encouragement and support. Kirsty Dance posted a photo thanking parkrun in general for the Saturday morning motivation - and we thank her back for being a consistent park runner, volunteer, supporter and general good egg throughout the years.

Martin Bishop's take on kindness was a selfie with wife Cathy and a quip about seeing old ladies across the road. Poor chap hasn't been seen or heard of since. 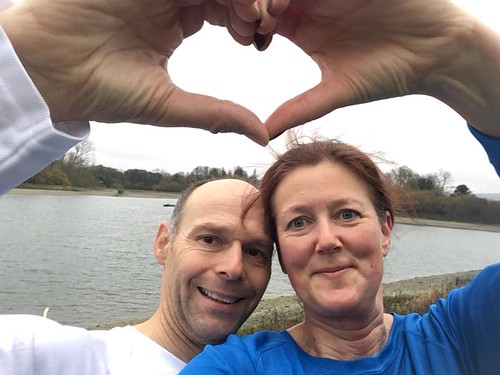 Love this photo of the Monks at Tring Reservoirs 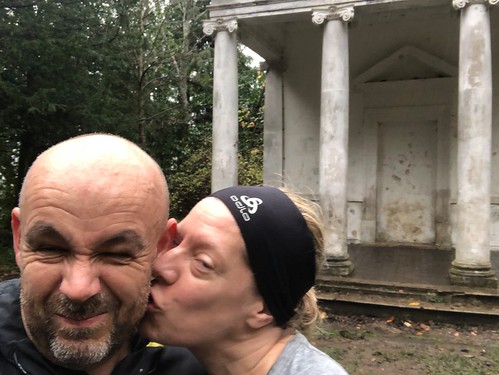 Steve Bladen was overcome with warmth and enthusiasm by Louise's display of love and affection.

Many took the opportunity to be thankful for having a good reason (if one was needed at all) to simply get out and run around the beautiful countryside surrounding Tring, Berkhamsted and the villages. We are lucky to have Tring Park, Ashridge Forest and Tring Reservoirs on our doorstep. 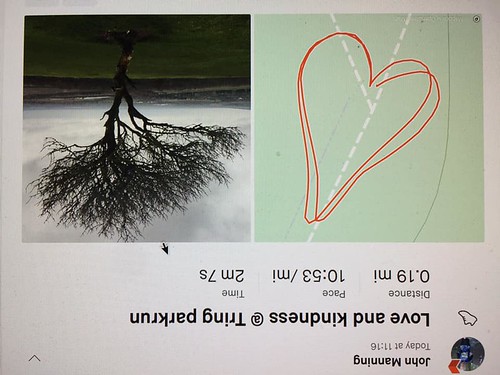 John Manning clearly allowed the love to go to his head - he ran a beautifully "hand scripted" Strava track to mark the day. Just a shame it was upside down.

That weekend also coincided with many of the medals and prizes, announced the week before, officially reaching the worthy recipients..... 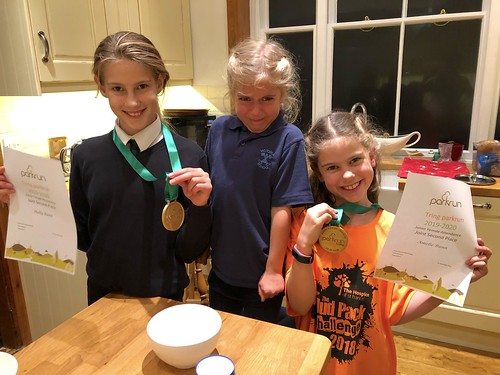 We love this photo of Lucy reacting to the fact that both of her sisters won prizes and she, errr, didn't. Lucy, however was a star throughout the year and has a long record of joining in the fun and has volunteered since she was a dot. We'll send her something special too, as a thank you.

Mad as a Hatter

Our 36th week of virtual parkruns recognised that it is getting a tad chilly outdoors these days. Hats are what were called for and hats it was for the weekend's theme. We had so many brilliant entries. 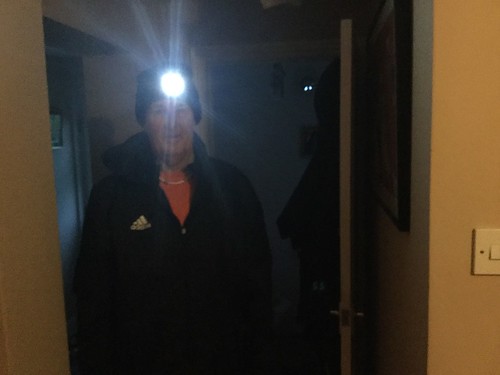 First off the mark was Robin Attfield - modelling the kit that many of us must resort to at this time of the year. Gone are the shorts and T-shirts and out come the fleeces, long leggings, gloves, hat and (if you are keen) a head torch to light the way. It's odd to say, but when I don my own beanie and headtorch I feel like I can take on the world - perhaps because I just can't see it. 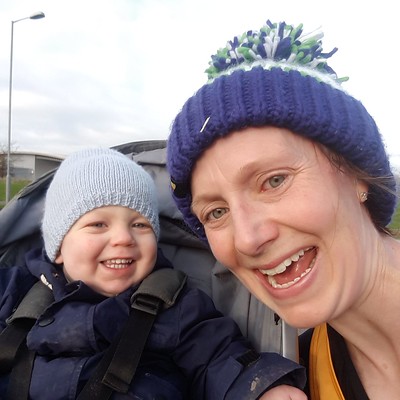 This made us smile, Claire and Brandon looking happy in their cosy hats

Every week Claire and her "running coach", comfortably seated in his pushchair, take on a virtual parkrun. At the speed Claire runs a hat is extra necessary due to increased wind chill factor, as the cold air comes whistling past! 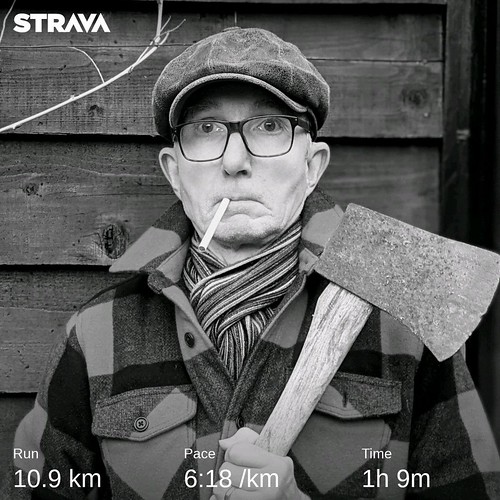 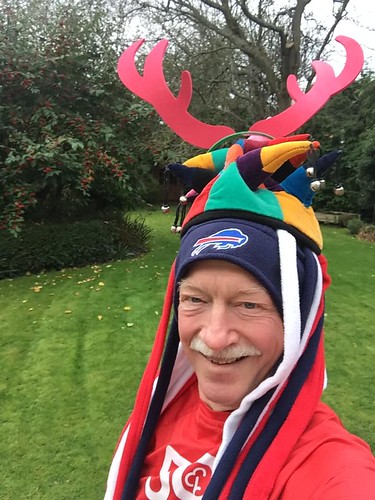 A spirited effort by John Manning. He was going for the "I wear many hats" style but looks more like a technicolour version of a Knight who says "nee"!

Phil Roger, alone, insisted that it wasn't that cold and had - shock - NO hat! We'll revisit this theme in February!

Now it's time to turn the clock back a bit. Three years to be precise. Cue the soppy background music...

Run Directors Ross Lambert and Anna Last, met, fell in love and decided to get married. The wedding was on a Saturday and so what better way to start the day than a quick sprint round Tring parkrun.

One problem though - as tradition demands Ross could not see his bride and so a cunning plan was hatched. What if we got as many brides to run as possible, thus throwing Ross off the scent and minimising the risk that he spots Anna amidst a flock of white dressed maidens?

And so, on the morning of November the 25th 2017 a zillion blushing brides executed plan "Bridal Dash". It has to be said that many (if not most) of the brides were not of a female persuasion, and just in case Ross might rumble this he was blindfolded (at least until the start) just to make doubly sure tradition was upheld. 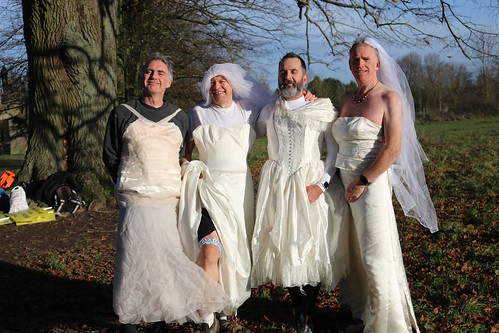 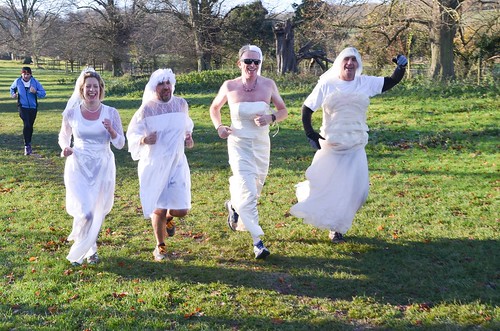 Who knew that running in a dress could be so hard
- well, three out of these four for a start 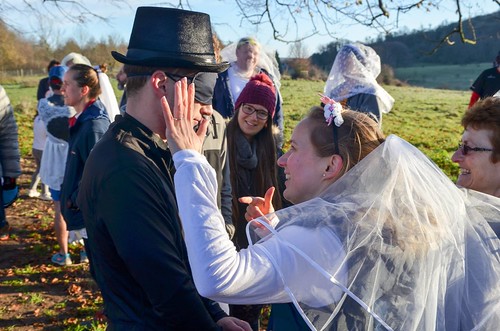 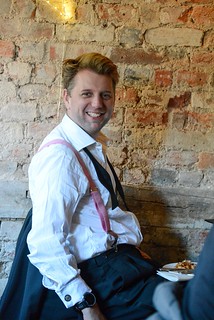 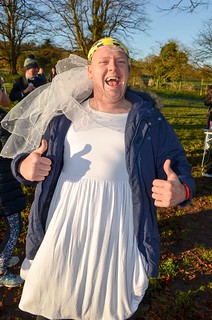 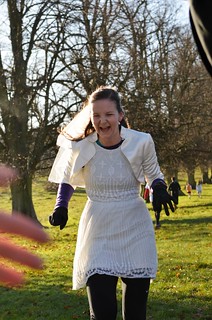 Our very own morning matrimonial delight

As they say "memories are made of this". Perhaps we should organise a repeat Bridal Dash to celebrate a future anniversary?

Read the run report from that week right here.

Let's do this real quick - just like the times that are increasingly recorded.

Week 9/11 to 15/11.
We welcomed three new "first timers": Matthew Manning, Will Rice and Seb Brummell.
Wes Ball and Blaz Ziembaczewski both lodged Personal Best times. In doing so Wes Ball propelled himself to the top of the podium outright. Paul Myatt nipped into top place taking Age% adjustment into account.
Louise Brooks was the fastest woman - so to speak.
Keith Stonestreet maintained his record of most (not)parkruns with a impressive total of 117.

Week 16/11 to 22/11.
First of all special mention to Wes Ball. On the 22nd he recorded a time of 22:22.
Harry Bryant (bless his cotton running socks) topped the table, followed by Paul Myatt and Damien Fortune. However John Manning and Kay Ison displaced the top two taking Age% into account. Great running all.
Louise Brooks and Isobel Roberts both bagged PBs - well done.

GREAT effort all round.

That's it for another week.

And REMEMBER - it is the virtual kilted parkrun this weekend.