Well no, it was actually Wes, Will and Ken in their kilts, but more of that later.

Our special events at Tring parkrun are the stuff memories are made of: Christmas, Halloween, Hawaiian Shirt Day, plus bonus events like the Bridal Dash (see last week!). And then we have the annual kilted parkrun to mark St Andrews Day. It never ceases to delight me that each year, in deepest Englandshire, we manage to assemble more kilted parkrunners than even St Andrews in Scotland itself.

This year it all had to happen virtually - a big ask. And we got a BIG response. So THANK YOU to everyone who joined in the fun locally and also the to "virtual tourists" from other parkruns.

The challenge for this write up (to be kept for all posterity and poured over by archaeologists hundreds of years from now!) was to know which of all the brilliant efforts to feature - they are all so good!

On the other hand, choosing this week's week's virtual first finishers was easy. Cathy and Martin Bishop not only had an impressive display of tartan attire but unveiled the most fantastic model of Nessy, our new kilted parkrun mascot. What a creative masterpiece, and what a lovely, thoughtful and fun thing to do. 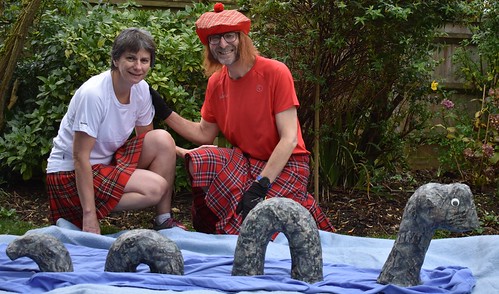 Cathy and Martin Bishop and the fantastic Nessy mascot they made. Next year it will have pride of place when we meet again for real.

A podium place went to our own our very own Annnnnnnnnndy Evans - who tackled (H)Adrain's Wall in his kilt. This made me laugh out loud, all the more so after discovering that the idea had long been brewing in Andy's mind. That wall really does belong to an actual Adrian, and it is indeed difficult to get over in a kilt! Inspired virtual parkrunning, well done Andy. 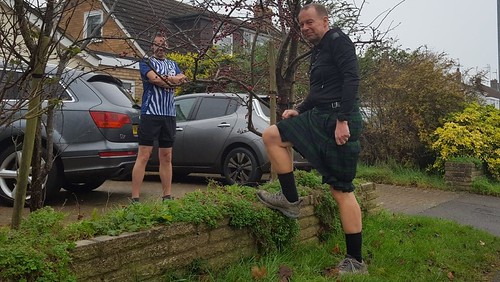 Another podium place went to Louise Brookes with a splendid, tartan assisted - and apparently lighter than air - leap into the elements. Happiness is Tring parkrun's virtual kilted parkrun! 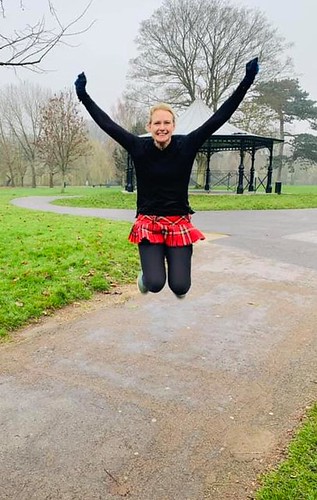 A quick jog around Tring Park on Saturday morning revealed many (responsibly distanced) regular parkrunners out stretching their legs, dotted around the landscape. Among these were Steve and Louise Bladen. Steve was Run Director for last year's kilted run and had a large audience for his opening words. Sadly there were a few less, in fact, no one at all to hear Steve this year. Roll on 2021.

Further afield a whole host of local, virtual events took place. As usual the Cheddington Crew were out in force - and we were especially impressed with Kirsty Dance's Highland Fling (a Dance doing a Dance), Katie Van De Linde was a very convincing, tartan-cowelled Green Lady of the Glens, and the McLeybournes skipped the run and ate a box of shortbread instead. 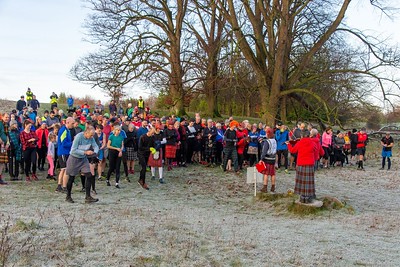 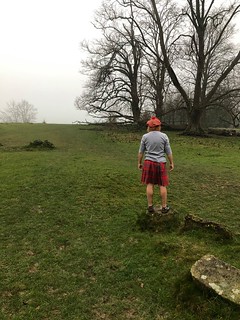 Last year an audience, this year no audience for RD Steve Bladen.

Greg and Juliet Mitchel went Haggis hunting. The weather was suitably misty but: 1) there are no haggis in Hertfordshire, 2) it is well known they are wary of the colour pink. Top marks for trying though.

We had an enormous display of tartan including a very fine kilt sported by (a not very impressed looking) Pencil, a stylish sash from Angela Hollands, cosy jim-jams from Angela Hollands and Lucy Clutton, very cool tartan buffs (one of my favourite bits of kit) from Clare Spry, Karen Hennel, Lucy Brittain and Vicky Lea. 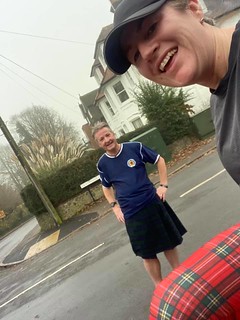 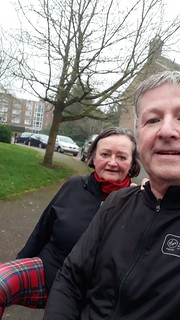 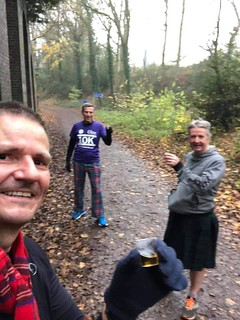 Steve and Rhona McKee, Peter Thornton, Taras Huzar and Anita White were very welcome virtual kilted parkrun tourists. Next year they will get an especially warm welcome when we do this for real again. Thank you for joining in the fun. 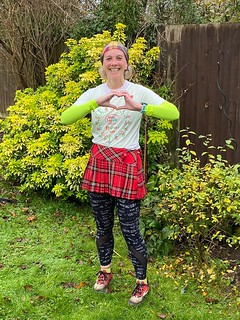 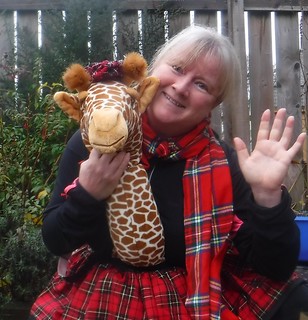 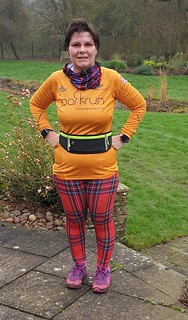 Of course there were many other great efforts from John Manning's misty glens, Blaz's impressive collectors item whisky bottles (we expect to see more of them next year!!), and young Mr Hallessey showed great taste in performance food (Scottish Oatcakes - better than fancy running gels!). Paul Dyett broke out his Sassenach mug (purchased in Edinburgh!) and Keith Stonestreet sported his Keith FC supporters scarf. (Keith being a small town in NE Scotland - between the metropolis of Inverurie and urban sprawl of Huntly).

And last but not least Run Directors Ken Douglas and Wes Ball (with son Will) donned their kilts and tackled the original Tring parkrun course - and even bumped into another RD (Katie) coming in the opposite direction - see the great video she took on our Facebook page. 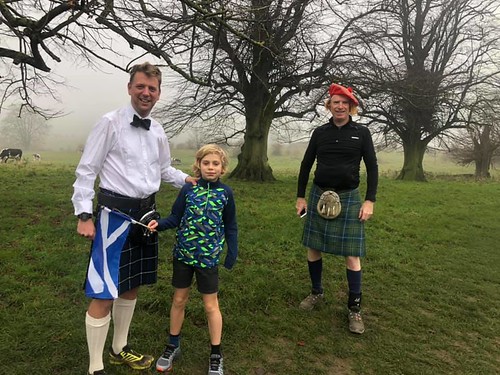 Covid may take our parkrun but it will never take our FREEEEEEEEEEDOMMMMMM!

What a great week.

This week's (not)parkrun results were interesting. Sam Meldrum was the only participant to record a PB - well done. This secured him the top spot in the Age% results table (with 70.88%), ahead of Claire Hallissey (68.88%) and Damien Fortune (on 61.44%).

In terms of outright pace Claire was first, followed by Louisa Hopper and Louise Brookes for the females; Sam, and Damien topped the table for the men followed by Harry Bryant.

To post you own (not)parkrun times simply visit this page.

Have a good week everyone, as we enter the month of December. The last month of a year most of us would rather forget......so keep smiling, stay safe, get out running and we'll see you for more virtual fun again next week.