I’m Zoe, one of the regular “setter uppers” of Uckfield parkrun and marshal with my lovely rescue dog Roxie. We can normally be found in our usual spot of Marshal Point 9, just in front of Buxted Park Hotel. 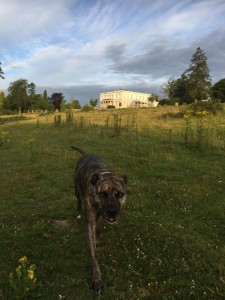 Rox & I had an early walk at Buxted Park this morning before work, retracing the summer parkrun route. How lucky are we that we are able to enjoy the beautiful park, with all the wildlife, livestock etc, for the weekly park run every Saturday. 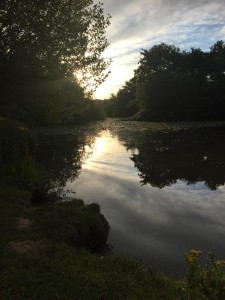 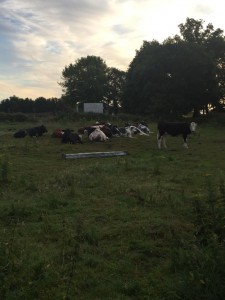 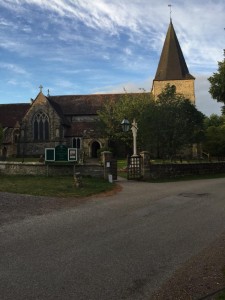 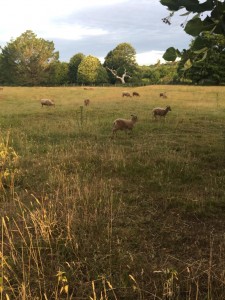 I absolutely love the community feel of the Park Run, welcoming runners from other areas, welcoming back the regular, familiar faces and being part of an amazing team of volunteers, who give up so many of their Saturday mornings to make the runs happen.

I do a lot of volunteer dog walking at The Kit Wilson Trust in Hadlow Down. I have had the “pleasure” of running the route only once, one very wet Saturday morning with Twyla the malamute (now in her new home), one of the Kit Wilson Dogs. Such a great experience for her and I, and such good advertising for the lovely dogs that are needing homes at our local rescue centres. 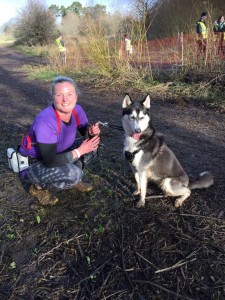 Thank you to Stephen Green for the excellent report last week. If you have read it I hope you enjoyed reading it: if you have not read yet it is well worth reading.

So this week is a little test of your knowledge of your course. Uckfield parkrun "Place the Marshal"  is  quiz consisting of a map showing the 10 marshal points and a picture of each marshal point - can you match the pictures to the marshal points on the map? Answers will be posted next week.

We are hoping to continue to produce a ‘report’ each week just to keep the Uckfield parkrun community in touch. We would like people to come forward and submit a report, your experiences of the parkrun, running or volunteering or both, get your children to draw a picture, some photos you have taken, or think of a puzzle or game. Please contact us at Uckfield@parkrun.com.

What does parkrun mean to me ?

Sometime in the second half of 2019, a friend who has been a parkrunner for years described me as someone who does parkrun, but isn’t a runner. At the time I thought it was an accurate description, maybe a little harsh, but fair.

So why do I get up and start every possible Saturday (pre Coronavirus) with a parkrun ?

I had heard about parkrun before it started in Uckfield, my friend had mentioned he knew that one was being organised, but I hadn’t run since school, 35 years ago, and it wasn’t my strong point then, so although mildly interesting, I had no plans to take part. After all, I’m not a runner.

For Uckfield’s third parkrun, I went along as a way to encourage my son to do it, thinking he would enjoy it. I never intended to do it again, but after that first try, we were buzzing all day, waiting for the text message to confirm our times, analysing our performances and thinking where we could improve. For me there was a lot of improvement possible. Running the whole way being the most obvious. Yes, my time was almost double his, but that didn’t matter. We couldn’t wait to go back and try again a week later.

After a few runs, I decided I couldn’t keep coming along to this free event without contributing something , so I started volunteering, wherever possible running as well, but if not, helping out with whatever was needed.

My son stopped coming along as he didn’t enjoy getting wet and muddy, or being slowed by the conditions. By now though, getting up early on a Saturday to help set up, do the first timers briefing, and run through the swamps, mud and streams that had appeared, was just a part of my Saturday, and I always looked forward to it. My times were slower, but I knew that come the spring and a dry course, I would be prepared for a new personal best.

When the Christmas Day parkrun was announced, my wife simply said ‘No. No, no, no, no, no, no, no. No’. Fortunately, she changed her mind. Then on New Year’s Day my son and I headed down to Seaford for a nice flat tarmac course, and of course a parkrun outright personal best, which I have since improved at Bognor Regis, another nice flat tarmac parkrun.

More parkrun courses beckon once parkrun starts up again, but Uckfield parkrun is where I will be most Saturdays.

At the last parkrun to be held, I wrote my first run report stating that next week I would be earning my 25 Volunteer T-Shirt. It turns out I have to wait a bit longer for that one, but whenever it turns out to be, I’ll be there.

In February 2020, I joined Uckfield Runners, and have entered my first 10k, although the date keeps getting put back (which I’m actually pleased about because it gives me more time to prepare), but I am running several times a week now, and looking forward to parkrun starting again. I’m never going to be as quick as my son, unless I can find a time machine somewhere, but I’m going to get the gap as low as I can, and when he’s as old as I am now, he’ll have a target to beat.

So, back to the original question, what does parkrun mean to me ?

Well, first of all, it’s not about the running, because one of the many great things about parkrun is you don’t need to run to join in. Of course most people run or jog, at least some of the course, but plenty of people also just walk, often as a starting point to build up to jogging, but there’s no requirement to. I still haven’t run, alright, jogged, all the way at Uckfield parkrun.

I enjoy improving my time, but the satisfaction I get afterwards, even without a personal best, outweighs the momentary suffering of getting wet and muddy in the winter, or hot and sweaty in the summer. I also enjoy the volunteering, and you don’t have to be a runner to volunteer, or a volunteer to run, but you can combine both. 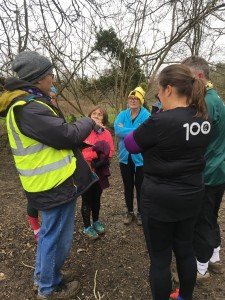 I often do the first timers briefing (as shown above) and I enjoy meeting both new parkrunners, and experienced visitors, hearing their parkrun stories, and then chatting afterwards about their thoughts on the Uckfield course. I’ve made new friends, and my fitness is still improving, but the biggest thing for me is being involved in something that is so much bigger than just a timed 5k run. It’s knowing that across the world at 9AM on a Saturday, hundreds of thousands of others are doing exactly the same, for so many different reasons, each with their own story to tell, and my running is just a tiny part of that.

I’ve also found a better description for myself. ‘I run. It doesn’t matter how far or how fast. I run, so I’m a runner.’ I know I’m never going to beat any records, except my own, but the most important person for me to beat is me, and that’s okay.

Why not tell us your parkrun story ?

I walked along the path at the bottom of the Rugby Pitch this morning at about 8.20am: seemed strange that there was no one about: used to it being a hive of activity with the marshals just on their way out, parkrunners starting to arrive, the first timers briefer and run director getting ready to do their bit and Elisabeth patiently sorting everybody out.

The game this week is much simpler than my last effort with the cross number puzzle, a nice little Uckfield parkrun themed dice game to amuse you.

Just print the game from the attached PDF file at the bottom of this report (it prints on three sheets of A4), optional to stick the sheets together, and then you need a dice and some counters or anything else suitable as a token.

I was asked to do a little write up about my experience of parkrun. Well what can I say...  many years ago (20+), I used to be a runner, and due to health problems had never been able to get back to it again. However, seeing parkruns springing up all over the place over the last few years I always promised myself that if one ever came to Uckfield, I would take part, the blessing being that it is so inclusive and I knew it wouldn't matter that I would be very unfit. I watched and waited, and finally began to hear rumours of one starting, and to cap it all, it was literally on my doorstep.

I did a few short runs in the months before it started but hadn’t managed to run anywhere near 5k, and I turned up for the 1st Uckfield parkrun with a lot of nervousness, but also excited to get involved in something that was just starting up. I am not a morning runner at all, so I make sure I get up between 6 and 7am to con my body into thinking it is later in the day. I got chatting to a lovely lady Fiona, when I arrived, who was doing her first parkrun as well, which put me at ease, and we are now both in Uckfield Runners. It was amazing being part of something with so many other people, 321 I think we had on the first one, and I was looking forward to my next one

The next time I ran was a few weeks later, and was about to head off home, when I saw Graham packing away all the kit at the end, on his own, so I went over and offered to lend him a hand, and did the same over the next few weeks, and that was the beginning of my volunteering as well. Since then I regularly marshal, and run when I can, and organise and pack away all the equipment each week, and have helped on a few set ups as well.  I totally recommend being involved in volunteering to anyone, it has been great to get to know everyone who helps out, and I have made some lovely friends. I love meeting everyone before we go out and marshal, chatting as we walk out to our points, and back again afterwards. I am not the most social of people, so it has been really good to get to know new people and push myself out of my comfort zone.

Each time you complete a parkrun there is a massive sense of achievement and also a sense of being part of something special.  It is an amazing, friendly community of people, so well organised, and everyone is always made to feel so welcome, whether you walk, or run, or a combination of both. I love the fact that such a wide range of people take part, and as a marshal seeing regulars week on week improving their fitness. I think I get more of a sense of achievement volunteering than taking part, although it has been lovely seeing my times get better (sometimes), and the thrill of beating the HILL for the first time, with marshal Dominic in his normal spot encouraging everyone at the top. Parkrun has given me confidence, fitness,  and friendships, as well as encouraging me to join the local running club, and take part in my first 10k race for over 20 years (thank you Elisabeth for ‘encouraging’ me to achieve that one) . 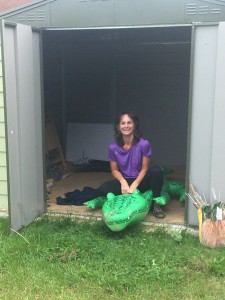