Thank you Elisabeth for the excellent report on volunteers last week; if you have not yet read it you can either follow the link on Facebook or go to the website news page (the volunteer star is a must see - if you have at sometime volunteered see if you can find your name).  On our news page you can see this and all previous reports for the last 12 months (so it now starts with the report from the second event, which wasn’t helpful for me writing this report: I was hoping to crib some comments from it and some pictures so had to do a bit of digging around).

In my previous report on 18 April I set out the events leading up to and including the trial run on 20 April 2020. As I mentioned in that report parkrun HQ advise you do not advertise the start as if you do you risk getting a cast of thousands at your first event (or maybe hundreds): very different from most running events where we promote the event for weeks before hand . For the trial run we had 55 runners drawn from invited local running clubs and a few people who had got wind of the event. 55 was about the number we wanted, enough to have a wide range of people running/jogging/walking to give feedback for us to test our new equipment but not too many to be overwhelmed .

Rumours had been spreading, there had been reports in the media of the funds raised, rumours had appeared on social media, and at the takeover of Eastbourne parkrun on 23 March 2019, many of those there would have realised that this was in preparation of our own event, and of course we had the trial run.

It was a nice day and an early start for some with those doing the set up meeting at the church in Buxted Park at 7.10am: we set out with an additional 15 arrows having run out of arrows when we did the trail run: we now had 35 arrows to stick in the ground at various points.

It was of course Star Wars day (May the fourth be with you) so we had a star wars theme going with storm trooper time keepers, Rey and an ewok as token collectors, and signs with ‘May the Course be with you’ (credit to Lauren Scordilas for the Slogan). 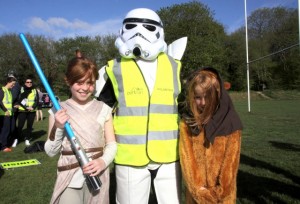 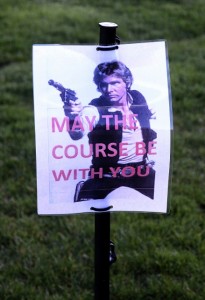 We also had the Town Cryer and the mayor in attendance.

As us volunteers congregated we wondered how many would come. We had realised that rumours had circulated and expected we could get 200 runners, and had advised the Rugby club to expect to serve a lot of tea and cake after the run. The Town Cryer called the parkrunners to the start and as they all lined up on the field for the start it was clear there were more than 200 runners. 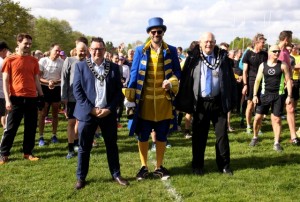 So after the normal welcome talk, with a lot of response to the "any first timers?" announcement, it was "timekeepers ready, 3 2 1 go!" and off they went round the Rugby pitch at the start of the first official Uckfield parkrun. 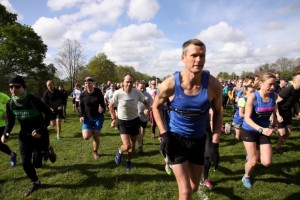 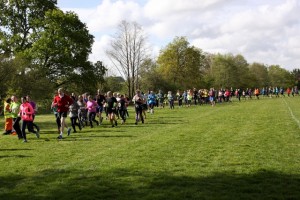 Those completing the course included the Town Cryer in full regalia and the mayor in his gold chain and a whole range of runners, jogger and walkers, the first back in 17:23 and the last in at 61:33, from children to an 83 year old - it was great to see all levels of runners, joggers and walkers and a few dogs enjoying the beauty of Buxted Park. 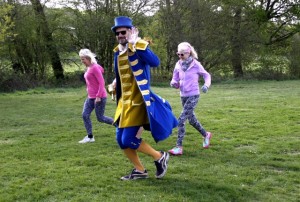 First back was Ben Christopher Gibson who recorded a time of 17:23. Ali Farrell was first lady with a time of 21:56. The highest age percentage of the day was Kay (Catherine) O'Regan who recorded 82.10% (35:06). Ben’s time remains unbeaten.

The event went well (much to my relief) with some very good feed back.

Ben Gibson said " A lovely Course. Excellently set up and marshalled by a group of very happy and encouraging runners and volunteers. Definitely worth a visit."

Spike Mayhew, the Uckfield Mayor said “What a great first parkrun with 321 people turning up, there was a good atmosphere, the course was well marshalled and I enjoyed running apart from the hill: probably won’t wear and suit and chain next time. Well done everyone involved.” Spike has subsequently run the route a number of times and I can confirm he did choose some more suitable kit to run in!

This first event was made possible by 28 volunteers:

"MAY THE COURSE BE WITH YOU"

We do not know when parkruns will resume but we do plan to continue to produce a report each week. Lorraine will be doing part 2 of the history around the course and we do have some other ideas for future weeks but if anyone else would like to do a report please feel free to include a brief write up so we might include them as a run report by sending to Uckfield@parkrun.com or post them to Facebook.