Some Details and History along the summer route, part 2 of 2

For those who have run the summer course you will know we start in the Rugby club field and first run a lap the rugby pitch to thin runner out before crossing the wooden bridge into the park.  You then head along by the lakes to the pillbox, this section being covered in part 1.

On the way out as you pass the pillbox you get your first proper view of Buxted Hotel, and of the hill that leads up to it.  At the top you have the hotel and the church which are the subject of todays report. 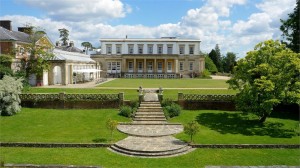 Buxted Park dates back to 1199 and has been enjoyed as a seat of power and prestige for many of those 900 years.   A manor house and park were recorded at Buxted in 1299.  This house was destroyed by fire in the early 1700s.  The estate extends to 312 acres.

The present house is a grade II listed building and was built almost 300 years ago, in 1725 by Thomas Medley after he purchased the estate in part in 1712 and in part in 1722.  Thomas Medley’s family had been keepers of the Privy Purse in the reign of Henry VIII.  Clearly even in those days there was money to be made in tax collection.

Buxted Park became the country seat of the Rt Hon Cecil Jenkinson Bart, when he married Thomas Medley’s granddaughter.  Under his tenure a number of additions were made to the house, including the wonderful Victorian Orangery, still in daily use today.  However he wanted to extent the estate and Buxted Villge was in the way, blocking his view, so he ceased maintaining their properties, in due course the villagers agreed to be relocated to the current  Buxted village which is about 1 mile away.

The only remaining sign of the village's original location is the 13th century Buxted parish church, where Cranmer’s book of common prayer was first introduced.   When I first moved to Buxted I used to wonder why they built the church so far from the village, of course they didn’t when it was built it was within the village.

As befitting the country seat of such an important family of Georgian and Victorian society, Buxted Park played host to many dignitaries including the Prince Regent and the great queen herself.  It is mentioned by the great bard, Wordsworth, in a letter to his brother, then the rector at the church on the estate.

This tradition of hospitality has carried on through the centuries, with musicians and stars of small and silver screen visiting this wonderful place.  In 1931 the house was purchased by the renowned designer of the Savoy in London, Basil Ionides.  He restored and remodelled it with many original 18th century features brought in and skilfully distributed around the house.  He added a new entrance doorway on the West side, which has a pediment on columns intermittently plain and with stalactite rustication which came from West Harling Hall in Norfolk and is early Georgian.  The balustrading of the new West forecourt was salvaged from Chesterfield House, off Park Lane and other parts of the forecourt came from various other houses.

He and his wife were great entertainers and good friends of George V and Queen Mary, who were regular guests at the house.

In 1940 disaster struck, when much of the house was destroyed by fire.  The top storey was lost and the shortage of materials during the war meant it was not possible to replace it: this is why the Hotel looks like it has been cut off at the top: it has been.  Prior to the fire the Manor was an early Georgian house of nine bays and three storeys, with a three-bay pediment to the North and South, and in the middle on both sides was added a one-storey portico of Tuscan columns. Now the house has only two storeys and no pediment; but the porticoes were preserved.

For Basil, whose ghost is reputed to still reside at the house, the war was not all bad news.  The blitz meant he was able to restore Buxted Park with some of the finest architectural pieces at little or no cost.  Basil visited bombed out buildings salvaging covings, cornices, chandeliers and beautiful show doors, all of which can still be seen around Buxted Park Hotel today.

Following the death of Basil and his wife the Rt. Hon Nellie, the house was purchased by Kenneth Shipman, the owner of Twickenham Studios.  He used it to entertain his stars, with guests such as Marlon Brando, Dudley Moore and Gregory Peck regulars at the house.  He even built a cinema to view his latest productions, which is still in use today.  This period also saw a return to the house of Sir Winston and Lady Churchill, who had also been regular guests in the time of the Ionides.

In 1963 the estate was bought by the Shipmans who opened the house as a health hydro in 1966. There is some historic film of the use of the Buxted park estate as a health Hydro to be found on You tube.

The property sold to the ruler of Abu Dhabi, Sheik Zayed who owned Buxted Park as his official UK residence from 1971, returning it to residential use.  He spent very little time at the estate during his fifteen years ownership but was responsible for creating the two lakes covering 3.1 acres.  He owned the estate until 1987 when it was sold to the Engineering and Electrical Union.

The Engineering and Electrical Union upgraded the old Health Hydro and opened the house as a hotel.   The day contracts were exchanged was the day of the great storm, possibly an omen for the union.  They lost over 200 ancient trees on the estate that day.  However many were left where they fell and if you look to the trees as you run past towards the pillbox you will see that what looks like a row of many trees is actually a smaller number of horizontal trunks from which branches have grown upwards.  It would seem the position of the union’s own philosophy did not fit well with the grandeur and opulence that Buxted Park represents so the hotel was sold.

From 1994 to 1 December 1997 the estate was owned by Juldis Development Ltd, a Thailand based development company, who invested in a substantial refurbishment programme. This included opening the Orangery restaurant, updating the Health Club, and refurbishing the bedrooms and the Drawing Rooms.

The property was then purchased by Hand Picked Hotels on 30th July 1999.  Hand Picked Hotels have undertaken a restoration of the Hotel, including the grounds, where many of the statues and ornaments sold off or removed by the union are being replaced.  The original rose gardens at the end of Queen Mary’s walk are also being restored.  The Hotel is a popular wedding venue.

Church and the Ghost of Nan Tuck 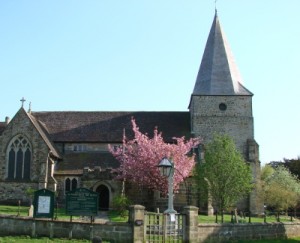 As we pass the Hotel we arrive at marshal point 10, in front of us is the magnificent  St Margaret's Church with its 13th century spire.  It has a very old Yew tree in the cemetery.

Between marshal point 10 and 8 on the left hand side you can see the village of Buxted in the distance. It was famous for Buxted chickens, widely sold in the 60s and 70s, but they are no longer in Buxted.

Buxted Village also, allegedly, has a ghost - Nan Tuck. According to local legend the ghost of Nan Tuck, who was accused of being a witch following the death of her husband in the 17th century, is said to haunt Nan Tuck's Lane in Buxted.  A mob set out after Nan Tuck and she evaded her pursuers over the next few days by climbing hedges and hiding in hay ricks.  It is said she sought sanctuary at the Church – according to the right of asylum if one could reach a church and touch the altar, a fugitive might escape punishment – but when she hammered on the door she was not let in.  But with local officials pursuing her, she was forced to run into the woods.  According to reports, she disappeared there and was later was found hanging from a tree in what is now known as Tuck’s Wood.  Legend holds that she haunts the wood and Nan Tucks Lane and that a circular patch of land in the woods near Nan Tuck's Lane stays infertile and no vegetation will grow there.

The account given at the time was that she was found hanging from a tree in what is now known as Tuck’s Wood (please see map below)—a suicide, the villagers said.  But you have to ask would a girl who had managed by her own desperate efforts to escape sentence of death then take her own life? 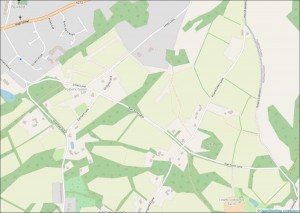 In the Church of St. Margaret there is a record of her burial in 1661.  I will let you draw your own conclusions on the ghost bit but Nan Tuck was real: but was she a murderer who met justice for her evil act or just a poor simple girl accused of a crime out of ignorance and lynched by a lawless mob driven by superstition?

Note that whilst today we would perhaps associate Nan with someone fairly old it was a common Christian name at the time and given she was able to out run her pursuers for some time she was likely a fairly young woman.

At the time, the village of Buxted may have had a murder on its conscious.  That is why they did not like going up Nan Tuck’s Lane, and kept well away from Tuck’s Wood at night, and perhaps that is why these places are supposedly still haunted by the ghost of a poor frightened girl.

We  now go back the way we came. The next time you run Uckfield parkrun remember all those things you now know.

If anyone else has a report they would like to write pending the return of the pakruns please do email uckfield@parkrun.com.