We have a guest run report writer this week:

Three of us travelled from Worcester to join in Walsall Arboretum parkrun, and for one of us – Wendy Pickess – it was a trip down memory lane having gone to school just opposite the park.  In those days running was seen more as a punishment than a pleasure, and as for many of us parkrun has helped to change that.  In fact, this particular parkrun landed on her birthday and was part of making the day special.

Despite the fact that this parkrun has been going ten years now and Worcester is not so far away, I had never visited the arboretum before. I loved the setting, with so many established trees, the twists and turns along the paths, the green in the middle and especially the loop around the lake. On the other hand, I find courses with three laps can be a motivational challenge, as I ask myself whether I can summon the energy and the willpower for another lap.  I had let some friends in Walsall know that I was coming, and they came along to watch and encouraged me each time I passed the central green, which definitely helped.

In total 309 people assembled for parkrun, with 28 volunteers making it all possible.  When the Run Director asked if there was anyone doing their very first parkrun there was definitely a hand raised at the back, and looking at the results there were actually ten people new to parkrun.  So welcome to the parkrun family and, be warned, it’s addictive!

Walsall people seem to run fast.  Jonathan Walters was the first finisher, in an amazing time of 15:44, and the first female runner was Kelly Butler in 18:34.  And a special mention to Dot Fellows, who finished in 24:57, and an age grading of 100.8% - which I think means that she is amongst the fastest women on the planet for her age!  Altogether 39 people managed a PB, so well done to all of them.

Thanks again to the friendly volunteers and marshals for making it all possible, keeping us safe and encouraging us along the way. It was great to be part of this parkrun and I would recommend it to anyone. 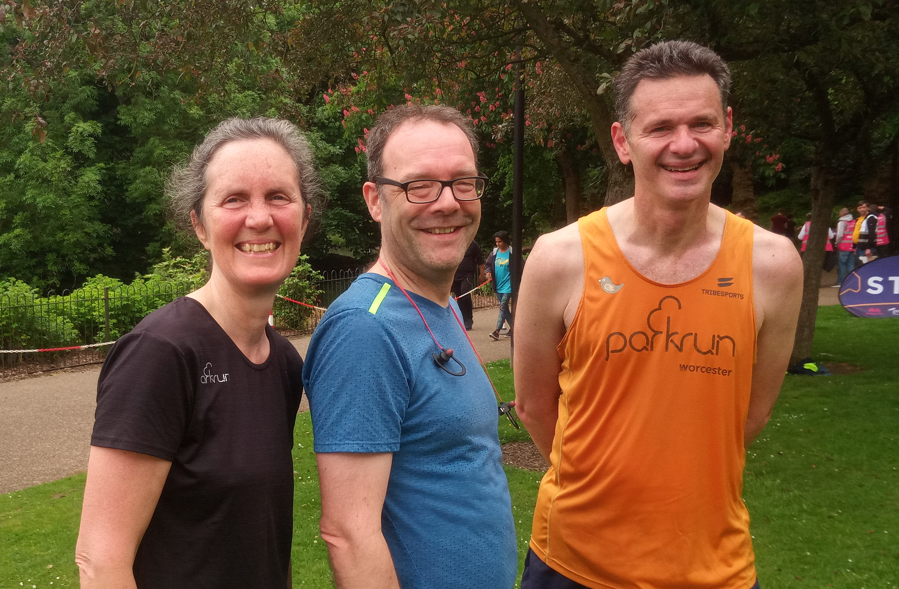 We also had a lovely email from Sue Cooper:

Just a brief message to say how much I enjoyed taking part in the Walsall Arboretum parkrun yesterday.  I had travelled from Southport to attend the Diamond League event in Birmingham, so stopping off in Walsall seemed a good idea.  Runners and local park users alike were so cheerful and friendly, it was a real joy to be there.  Thank you so much.

The coffee was pretty good too!

Any photos used in this post have been taken by Julian RODERICK unless otherwise stated. If you would prefer not to have your photo taken, please speak to the run director on arrival. The link to this week's photos is here

Saturday's event turned out to be a celebration of Mick Elwell's magnificent achievement of reaching 500 parkruns and the first at Walsall to achieve this. Mick was well supported by family and friends and great to see so many milestone t shirts in support.

The occasion was made even special with Ursula, daughter Carol and 2 Granddaughters running with him with Elizabeth achieving her 10 milestone and Eve celebrating her 9th birthday.

In addition to this Mick and Ursula are both members of our Core team and are at the Arboretum early every week regardless of weather to ensure the course is checked and set up then help put away afterwards. Both have completed well over 300 volunteer credits although would be close to 500 as this wasn't recorded the same way in the early days.

Well done and thank you Mick we are very proud of you from all the Core team, volunteers and all the Walsall parkrun family

I'm pleased to report our friend Peter who had to go to hospital as a precautionary measure returned home yesterday afternoon and was settled and comfortable, thank you to the marshals and runners who stopped to assist and make sure Peter was okay

On Sundays, 4-14 year olds can take part in junior parkrun, which is run over a 2km distance. The nearest junior parkruns to Walsall Arboretum are :

On This Week In History

Any photos used in this post have been taken by Julian RODERICK unless otherwise stated. If you would prefer not to have your photo taken, please speak to the run director on arrival. The link to this week's photos is here

If you can't wait until Saturday for your next parkrun fix, there are a couple of podcasts that might interest you