With no run at Walsall today, many runners took the opportunity both to venture to other parkruns and to complete more than one event on the same day.

As ever, this is probably not a complete list. If your results are not listed, please get in touch and I'll add the details in.

There's less than three weeks until Christmas Day, and the parkrun Christmas Compendium is nearly complete. I have extracted the planned runs for all West Midlands parkruns (plus Conkers since they're close enough to Kingsbury Water to be able to do a New Years Day Double).

Just to remind you...

Please ensure you keep an eye on the parkrun news page / facebook page / twitter page of the event  you are planning on visiting (or the Christmas Compendium itself) to ensure you are aware of any last minute changes to their plans.

Whilst a record number of you were at parkrun, Ayaaz, Chris, Dilip, Greg and Paul headed off to Leicestershire to take part in The Wolf Run. It's not your conventional 10k race as it started like this: 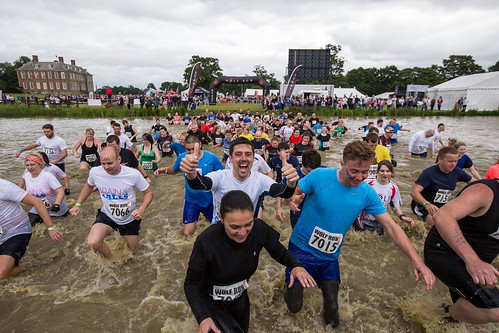 It then headed through Woods, over Obstacles, through Lakes and across Fields (hence the wolf acronym). They got very muddy, but had a great time and can thoroughly recommend giving it a go if you fancy something different.

Sunday saw the inaugural Walsall Triathlon at Oak Park Leisure Centre and there were a good number of Walsall parkrunners who added a 400 metre swim and a 15km bike ride before the 5km run which they'd be used to. 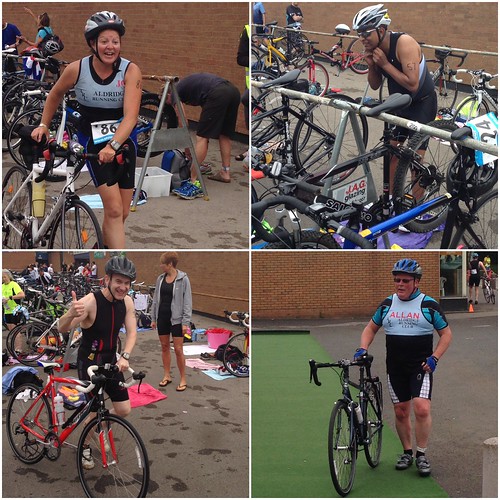 The left pictures have Jo and Jon starting their ride and the right pictures have Dilip and Allan having just finished and are about to start their run. (Pictures: Chris Tucker)

For many it was the first time they'd tried to put the three disciplines together, in a competitive environment. For some it will also have been the last, although there were a lot of people buzzing at the end of it! 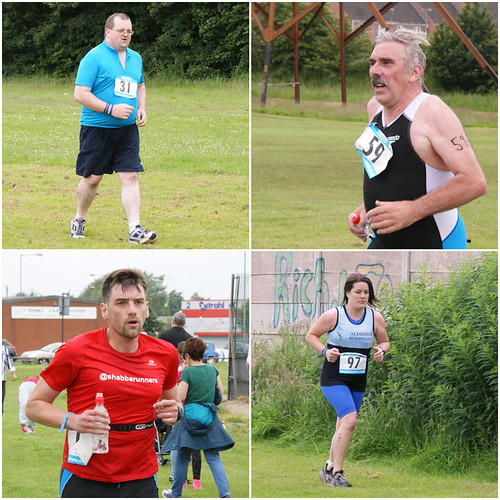 The headline finishing times are below, although full details of a competitors split times for each element, including transition can be found at StuWeb here: http://www.stuweb.co.uk/race/G6/44.html

Sorry, didn't get round to posting the Sunday race update last week, so it's a double helping this week!

Sunday 11 May saw the running of the Market Drayton 10k. This was recently voted the best 10k in the country by Runners World and was very well attended with 2,300 runners taking part. Some Walsall parkrunners couldn't resist the temptation (well it was a race after all).

Due to a technical error, not all chip times were recorded, times with a G are gun times as opposed to chip times.

Market Drayton also boasts one of the best goody bags I've come across. Remarkably, this picture that I've *cough* borrowed from Lee Harris doesn't include the Muller Rice, copy of the Shropshire Star, Mars Bar or pint of beer! 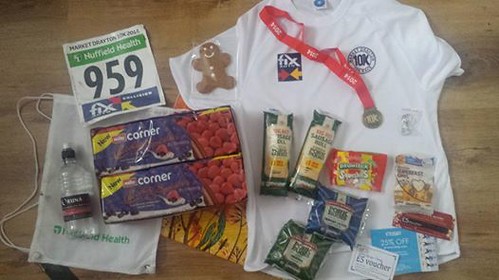 This week's round up of other local races and events that Walsall parkrunners have taken part in. As always, apologies if I've missed anyone off. Comment on our facebook post, reply to our twitter stream or e-mail the office and we'll add you in.

Obviously the big race this weekend was the one in London, however there were also a couple of other races locally for runners who either didn't want to do the marathon or didn't make the ballot. 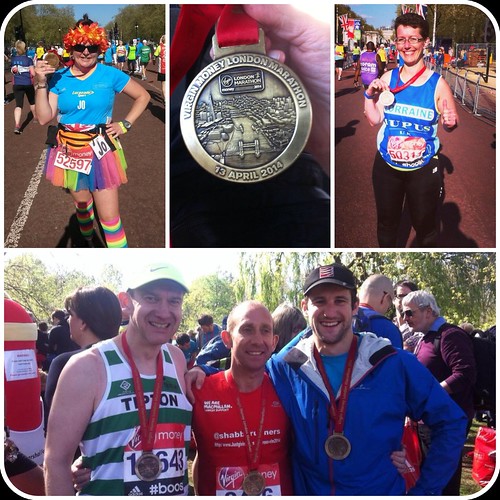 Peter now heads off to the States to take part in this year's Boston Marathon on 21 April, and if two marathons in 8 days wasn't enough, he's also going for the Rock 'n' Roll Marathon in Nashville on 26 April. Can he run all three marathons sub-3 hours? We all wish him well!

Pelsall 10k
It was the first running of the Pelsall 10k for some time and runners have reported that the course might have been a little short - however the times achieved are as follows: 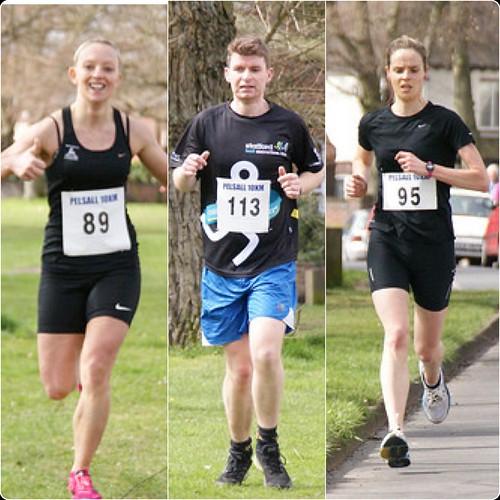 Lizzie, Ian and Amy on the finishing straight at Pelsall. (Photos: Ron Reynolds)

Pelsall 5k
I haven't heard any comments as to whether the 5k course (1 lap) was also short. 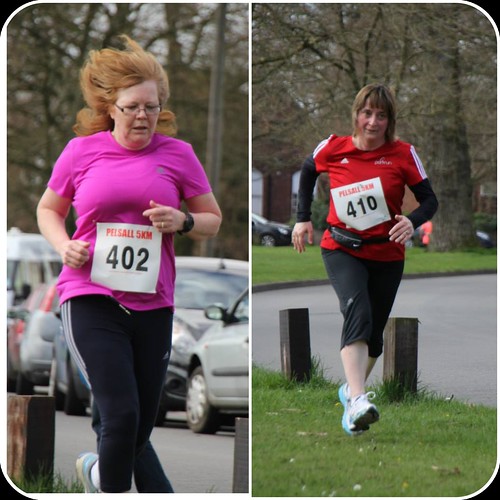 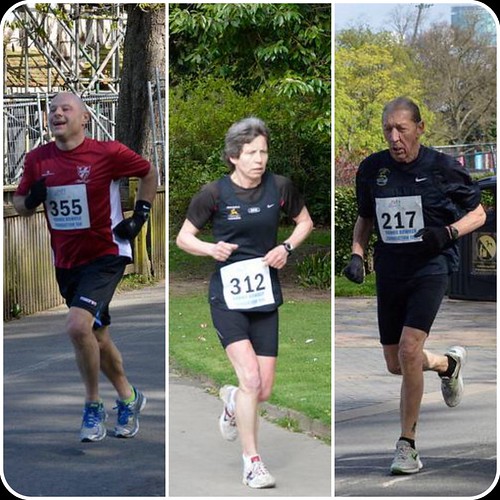 Let's start the round up of last Sundays race with the longest races getting shorter. I don't know whether anyone was running the Brighton marathon as their results website doesn't seem to include clubs so if you ran that race and want your time included, please let me know and I'll add you in (send an e-mail to the office).

Our best wishes go to Alister Brown, who also took part in the Halesowen Triathlon, but came off his bike toward the end. Hopefully meeting 2013 ITU World Triathlon Champion Non Stanford went a little way towards making up for the DNF.

Despite the Sheffield Half being all over the news for the wrong reasons on Sunday, their website is still crediting Gemma with a time (well after all that you'd want your new PB to be recognised wouldn't you!) Unfortunately, she also picked up an injury during the race. We hope to see you back at the Arboretum soon, Gemma.

And so this Sunday it's the London Marathon. Good luck to all Walsall parkrunners taking part, whether you're racing, running for charity or just for fun. The Express and Star has spotted another of our number hitting the streets of the capital for charity - Abigail Wright. I couldn't find the online version of the Express and Star article, so she's kindly let me 'borrow' her clipping from the paper. 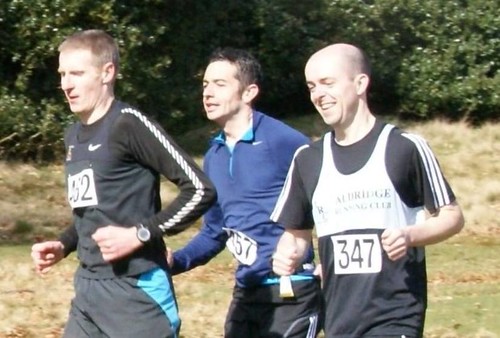