It's been 19 weeks since the last parkrun was run/walked/jogged on 14th March 2020 - it seems such a long time ago. Although a lot of people have managed to continue to get out and run or walk throughout lockdown, one of the big things that I miss about parkrun not being on is the social element, the chance to see old and new friends and catch up with their week, perhaps over a coffee after parkrun. And so for the last 7 weeks we came up with an initiative that, whilst it doesn't enable us to chat over a cup of coffee, enabled us to see the faces of our fellow parkrunners and perhaps hear a few words about where they went out to walk or run.

The idea was simple. Each week one of the colours of the rainbow was selected with the instruction to go out - or stay in - and do some exercise wearing something in that colour. Then to take a photo of it, and post it on the Walthamstow parkrun facebook page. And so we could wave at each other through pictures, stay in touch with the parkrun family and perhaps be motivated to do some exercise. But why a rainbow? In its most literal terms, a rainbow is a meteorological phenomenon that is caused by reflection, refraction and dispersion of light in water droplets resulting in a spectrum of light appearing in the sky. But it is also a symbol of hope, and one that was adopted at the start of the Coronavirus crisis, with children drawing pictures of rainbows that were proudly displayed in windows, and rainbows being drawn on pavements, fences and walls not just to symbolise hope but also to thank the NHS workers and other keyworkers who kept things going whilst people were 'locked down' in their own homes. And the rainbow flag is also used as the symbol of gay pride or LGBTQ+ so it also seemed fitting in June as our Pride parkrun was also cancelled. There are many myths surrounding rainbows, including the Irish myth that leprechauns hid pots of gold at the end of the rainbow! And so it seemed appropriate to choose a rainbow as a symbol of hope - perhaps the pot of gold at the end of our rainbow would be the confirmation of a date as to when parkrun will resume!

The first week was 30 May - 6 June, and designated RED week as red is the first colour in the spectrum. I anxiously wondered whether anyone would take part, but very relieved to find that 28 of you did, posting your photos on the facebook page. Fortunately, the parkrun milestone t-shirt earned for doing 50 parkruns is red, so many of you didn't have far to go to find a red t-shirt, but it is also the colour of the MIND "Run Every Day" challenge, and the club colour of East London Runners running club so it didn't prove too much of a challenge. Although it was great seeing everyone's photos, I think my favourite was Mo Allen's handstand against the obelisk at Pole Hill, which led me to do a bit of research and I fell down a wikipedia wormhole reading all about Laurence of Arabia! 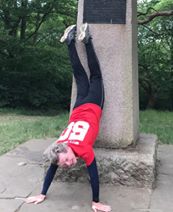 I was taught the mnemonic "Richard Of York Gave Battle In Vain" to remember the order of the colours of the rainbow. At the time, I was trying to grow beetroot in a little patch of garden, so for some reason best known to a six-year old I changed it to "Richard Of York Grew Beetroot In Vain" which is how I have remembered it ever since! However you remember the order, the second colour in the rainbow is orange, which I thought might be a bit more of a challenge until I realised that in a certain light the parkrun apricot top might easily be classed as orange! This week we had pictures taken in back gardens, in parks, in the Olympic park, by lakes or even on roof terraces like this one of Suzi Brent who ran her 5km orange run at 5am on her roof terrace in Walthamstow, in memory of Justin Edinburgh, the Leyton Orient manager who tragically died a year ago at the untimely age of 49. 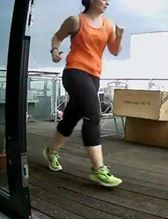 Week 3 (13-20 June) was all about mellow yellow! I loved this week; there was something about seeing all the sunshiney yellow tops that just made me feel happy! It did prove a challenge for some though, as yellow doesn't seem to be a common colour for a running top. Not to be deterred though, we had some creative entries this week, including this fabulous yellow lego bag modelled by Richard Selby! 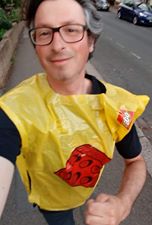 There was no such problem for GREEN week (20-27 June) for the hard-core parkrunners who have previously run over 250 parkruns, as they could wear their milestone green t-shirt, as modelled by Steve Bywater who wore it for a freedom run at Wanstead Flats parkrun course. And a number of other parkrunners wore t-shirts from races they have previously run in, bringing back happy memories sometimes of races completed alongside other members of the parkrun family. 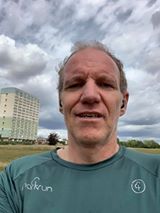 Blue week (27 June - 4 July) also didn't prove too much of a problem for finding coloured tees. Walthamstow parkrun hasn't been going long enough for our most loyal parkrunners to have earned their blue 500 milestone tee, but blue is the club colour of Eton Manor running club, and also a lot of events seem to chose blue for their finishers' tees, including the London Marathon, worn here by Antony Smith at Connaught Water: 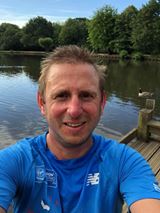 However, Indigo posed a bit more of a problem, as there was a lot of confusion about what colour indigo actually is! I think my favourite pic of this week was a socially distanced group shot of Penny, Clare, Rachel Sharron and Steve at the Peter May centre reminding us all that we can still run on our parkrun's grounds, even though it seems to have worn Steve out! 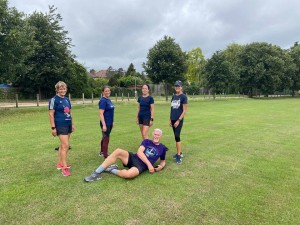 And all too soon it was the last week - Violet - 11th-18th July. When we started this challenge, I said that if parkrun was back before we got to the end of the rainbow we would take it that our symbol of hope had worked - sadly this was not to be. But it was small consolation to see everyone's violet photos and the effort that everyone went to - even Gail Seal managed to get out and get a violet selfie in front of some violet flowers despite having fallen over on her long run the week before and fractured her elbow! 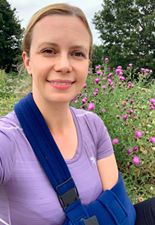 One of the reasons we wanted to do this challenge was so that we could see all the familiar faces of our parkrun friends, despite not being able to see them in person at Peter May on a Saturday morning. And a huge thank you goes to everyone who has taken the time and trouble to post photos - some every week. It's been lovely seeing the familiar faces, and also some newish ones too. But an added bonus has been seeing the faces of some virtual parkrun tourists, who have posted pics each week from Luton, Scarborough and South and North Wales proving that the parkrun family stretches far and wide! So a big thank you also goes to Kathy Sandler, Helen and Andy Rutter, Anthony Howe and Elizabeth Czaban. I hope that when parkrun resumes and we are able to do some parkrun tourism again, that you will come and see us in person - and I also hope to get round to see you on your home turf at some point in the future. 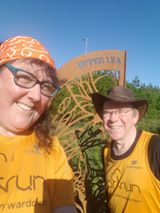 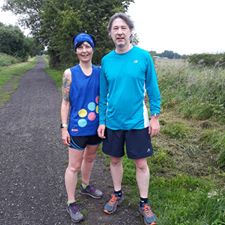 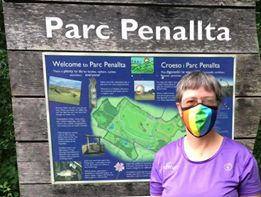 And so we come to the final rainbow collage featuring everyone's photos in glorious rainbow technicolour! I hope you enjoy seeing the final rainbow wave and looking for yourself amongst the photos! And keep an eye on our facebook page for the next challenge... 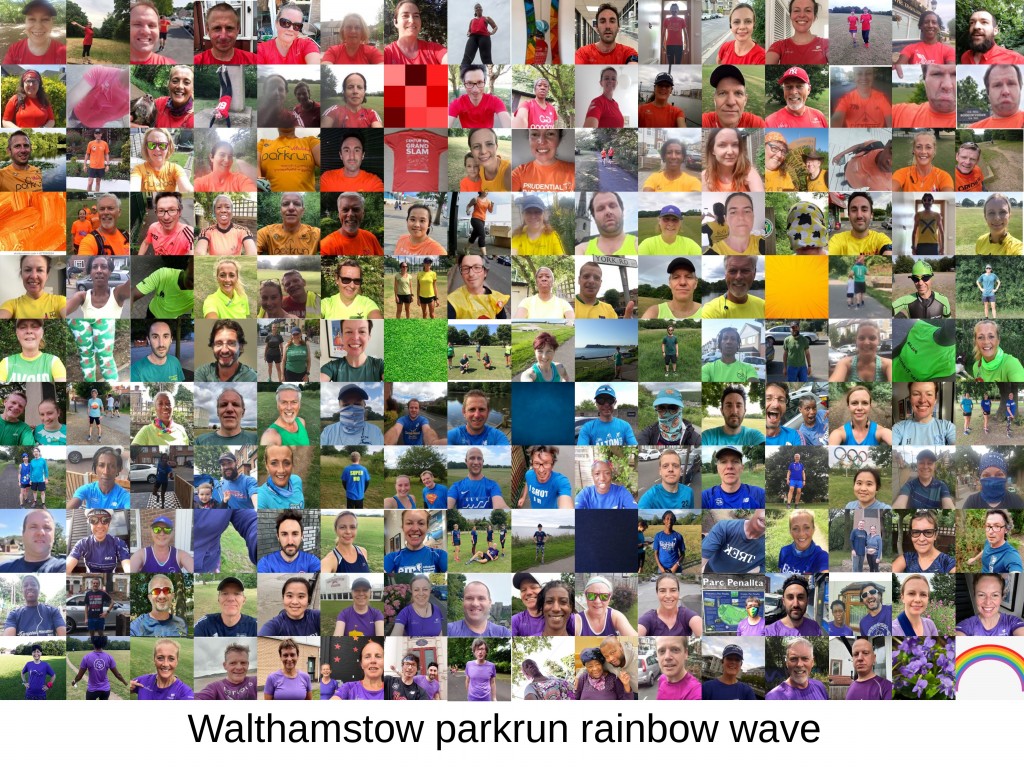