This week's report is contributed by Jim Upton, one of our visitors

Signs of snow on the nearby mountain tops and grit on the cafe paths indicated that this was going to be a very cold 93rd Whinlatter parkrun. I have been visiting the area at this time of year for many years, and can’t remember it being as cold. However that did not stop the 142 parkrunners, including 23 who achieved a PB from taking part in a hilly and beautiful 5k.
This weekend we were joined by dozens of vintage cars taking part in the annual Lake District Hill Climb for cars from the 1920s and 30s. The drivers and passengers looked even colder than the runners! Fortunately they only went as far as the car park so the parkrun was not affected.  It was good to see them on the roads round the area.
Fifty-nine parkrunners were new to the course including Colin Christie and Lynda Carter, for whom this was their first ever parkrun. We welcome them to the parkrun community, all the other courses will seem flat in comparison!  Congratulations to Helen Birrell, from the Liverpool area, who ran her 50th parkrun, and Angharad Cooley, a local runner, who ran her 100th parkrun.  We hope to see you here again soon.
We also welcomed 16 “Mud and Miles” trail runners from the Nottinghamshire and Lincolnshire area who started their weekend with the Whinlatter, followed by runs up Causey Pikes later in the day and other local fells on the Sunday! 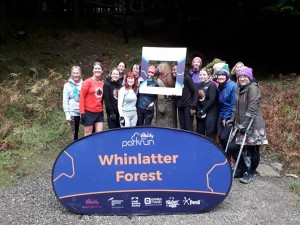 Our First Finisher was also a First Timer to Whinlatter, Chris Batman Lockhart from the Midlands, accompanied by his dog Ronin. They were followed by Robin Regan of Eden Runners and Matthew Atkinson of Keswick AC with a new PB. 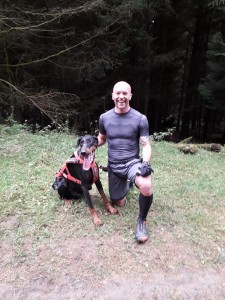 Rose Singleton running her 21st Whinlatter parkrun was the First Female, followed by Ellie Debenham in her first Whinlatter parkrun and Zhu Li McGurk, a JW 11-14 runner who has taken part in 68 parkruns in the Northern Lake District!.
Our most experienced parkrunner taking part was James Love (303 parkruns) from the Greater Manchester area.
Many congratulations to these and all the other parkrunners who enjoyed the beauty and challenge of Whinlatter.
Our team of hi-viz heroes were on great form as always, and were well wrapped up to fight the cold. Many thanks to Sonia DRYDEN  and her team of Andrew JONES  •  Andrew KNIGHTS  •  Anna FERGUSON  •  Brendan CARLIN  •  David SANDERSON  •  Janet KNIGHTS  •  Jim UPTON  •  Jo GRUCHY  •  Rachel JONES  •  Sonia DRYDEN  •  Tanya COATES.
Without our volunteers our Saturday mornings would not be anywhere near as enjoyable.  And the cafe is very good too.
Jim Upton
Occasional visitor from Uppermill, Greater Manchester

This week 142 people ran, jogged and walked the course, of whom 59 were first timers and 23 recorded new Personal Bests. Representatives of 42 different clubs took part.

Whinlatter Forest parkrun started on 13th January 2018. Since then 4,414 participants have completed 8,548 parkruns covering a total distance of 42,740 km, including 1,328 new Personal Bests. A total of 199 individuals have volunteered 972 times.