A Day to Remember

Our Race Director for the day, Robert Beeby, brought the meeting to order. As had been announced in previous weeks, this week we were remembering 3 stalwarts of Wimbledon Common parkrun who unfortunately passed away in the last 18 months. 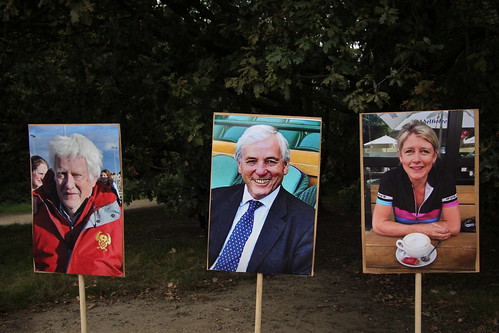 I have reproduced below the comments made by the Run Director prior to the run.

Pete Mulholland. Pete devoted his life to athletics and particularly running. He was well known all over for his support both of Hercules Running Club and Surrey Athletics generally. In 2015 the Queen sent him a letter telling him that he had been awarded the British Empire Medal for services to athletics – unfortunately, it was many weeks before Pete opened it – he thought it was a tax demand! In fact, he was one of the original runners here at the very first Wimbledon Common parkrun and loved the event. His parkrun stats are amazing…..the inaugural run here at Wimbledon plus two previous runs at Bushy for a total of 3 runs and volunteering a staggering 492 times, 439 times as finish tokens often referred to as ‘Pete’s job’. Pete has a bench just to my left and will remembered for giving out the finish tokens with such wonderful humour. He was also known for giving out his Hercules business card to aspiring young runners as well! I often asked the top young guys here who they thought was the fastest runner today. They said, ‘Oh, it’s him’ or ‘Oh, it’s her’ …. I would say, ‘No … it was that old chap over there sitting by the finish. His 5k PB ….. 14 minutes 40 seconds!’ Pete was really a top athlete and a top man.

Nicola Whitford She epitomised everything about parkrun and particularly Wimbledon where she did all her 500 parkruns. She was friendly, generous, supportive, encouraging and would do anything to help. Her last run was really a slow walk – but she was determined and she made it round…assisted – it has to be said -by a pop up drinks station serving champagne in the woods. She loved every minute of her Saturday mornings… she even has a corner named after her on our course, where she was often heard ticking off runners who cut the corner… Nicola’s Corner is where her bench now stands. There are so many lovely stories about Nicola and parkrun…but the most amazing stat is that on her 400th run she achieved a personal best! WOW…a truly incredible achievement. There was also a parkrun romance with the amazing Nick Wright which led to their marriage shortly before she died. Nick Wright…an incredible human being! If you look at that bench on your way round you will see it says "Nicola Whitford – remember me and smile".

Doug Laidler Doug Laidler was really a rugby player from the North East but he loved sport in general. Like many people at parkrun he used to dislike running and then having once done parkrun he developed a passion for it. He ran 244 times here at Wimbledon often with his daughter Katherine and son-in-law Jim. The photo is of Doug in the Royal Box at Wimbledon All England Club…the proud father watching his daughter Katherine play on Centre Court. Of all the runners I have seen over the years, Doug was by far the most determined. I always told him that he went off too fast….by the first bend he was exhausted… But you know what, he always finished…completely exhausted but he finished. He left nothing in the tank! Doug loved parkrun here on the common, the parkrun event, and the parkrun community. Who can forget the toast mountain in the café that the Laidler family scoffed on Saturday mornings! Takings at the café must now be well down!

There was then a round of applause rather than a minute’s silence to celebrate the lives of all three who will be sadly missed because they were integral to Wimbledon Common Parkrun. 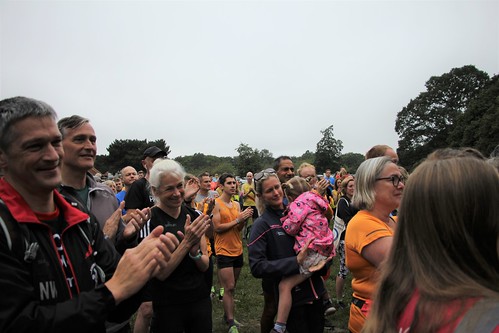 Pete, Doug and Nicola would all have wanted to see happy, smiling faces.

We then set off to give our lungs an oxygen boost.

Here are a couple of photos that I particularly like which show parkrun as a family affair and an event which takes account of others. 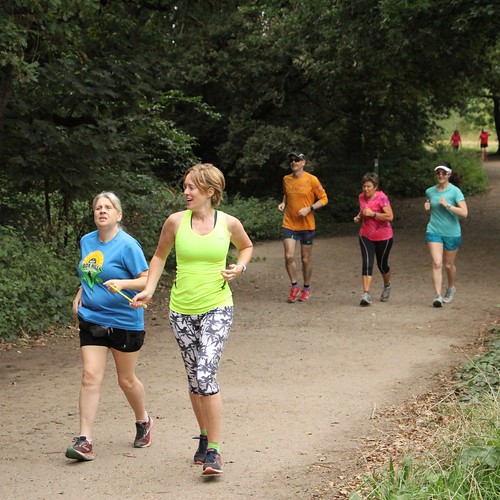 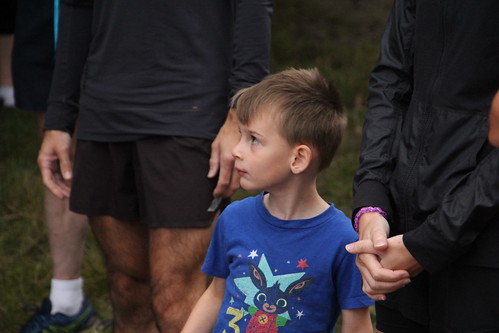 I wonder what he is thinking.

It was good to see that there were so many Hercules AC runners in their club colours to honour Pete. It is also worth noting that the first over the line, Rhys Boorman, is a Hercules member. He completed the course in 16’ 04”. Second runner to cross the line was “Unknown” and the third was Will Taylor (Age group JM15-17) in 17’ 48”, a personal best for him.

There were two milestones this week. Gemma Brennan completed her 250th run and Daniel Minifie completed his 50th with a personal best. Well done to both and particularly Daniel for completing two goals on the same day!

Unfortunately Covid-19 has necessitated us having more volunteers than in the past in order to carry out the barcode scanning more quickly to avoid queues forming. Therefore, I urge you if you have not done so already to sign up for volunteering. It only needs to be twice or three times a year.

We have to thank this week’s 33 volunteers:

This week 473 people ran, jogged and walked the course, of whom 20 were first timers and 62 recorded new Personal Bests. Representatives of 29 different clubs took part.

In the past few weeks many have rejoiced at the fact that we are able to meet and parkrun again. I share that enjoyment. It is also very pleasant to be able to express that fun and pleasure again in these reports. I hope you enjoy them.