Another largely wet week was punctuated with a few day’s brightness and dry spells – hardly sparkling July weather in what should have been the last week of the school year. I don’t know about you, but it seems to me that in true sod’s law fashion, we had the most glorious 3 months between March and May during which time we were barely allowed out and had to stay indoors as much as possible and ever since rules were relaxed slightly to allow more travel and more outside meetings with other people, the weather has made this quite difficult, unless you pick your moments right! Typical.

On Friday night, Event Director Michelle put on Facebook that she and husband Bryan were planning to have a walk along the parkrun route the following morning and asked whether anyone wanted to join them. In the event, Saturday morning saw the rain tipping down and, although Michelle did dutifully head out, they only stayed around half an hour in the rain, encountering a few Witton faces along the way. Although the weather wasn’t fit for man nor Beast on Saturday morning, we all know full well that under normal circumstances there’d still have been around 50+ parkrunners and another 10-15 volunteers trooping out to Witton for another run around the Beast – and we wouldn’t have it any other way! Hopefully, we’re back soon, but it still feels a long way off in all honesty. The latest information from parkrun HQ is available here: https://blog.parkrun.com/uk/2020/07/21/covid-19-coronavirus-update-21-july/ 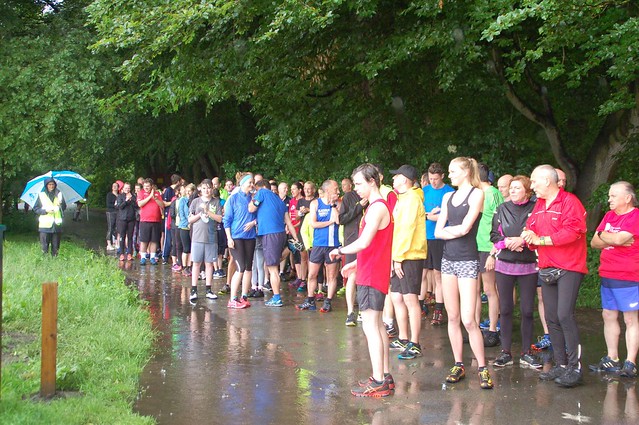 A scene such as this, from Event #84 in June 2017, would have probably been repeated had we parkran this weekend!

Locally, the threat of some form of local lockdown is still very real. Over the past week, cases in Blackburn have edged above the previous flashpoint of Leicester with 82.6 cases per 100,000 people in the week up to Friday, above the 81.6 cases per 100,000 in Leicester. The same local guidelines apply as last week, limiting the mixing of households to two, elbow bumps rather than hugs or handshakes, with face coverings and social distancing essential. It is important we all follow the advice to help reduce the prevalence of COVID-19 in the community. 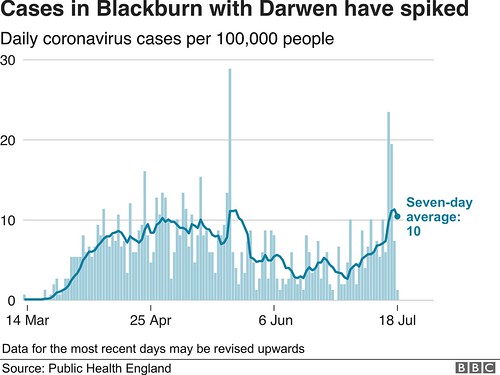 More poor weather meant a further reduction in both (not)parkrunners (8, down from 11) and runs (11, down from 12) for Witton this week. Fastest for the first time was Witton 50 Club member Peter NICHOLSON in 24:30. This was Peter’s second week of (not)parkrunning and he knocked over a minute and a half off his time from last week, in the fastest of his two runs this week. Second was Blackburn Road Runner Andrew WISDOM in 25:12, a new (not)parkrun PB by 12 seconds in his third (not)parkrun in four weeks. 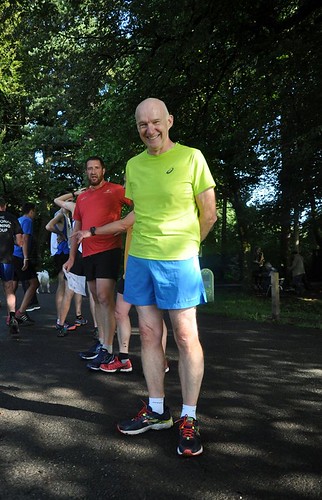 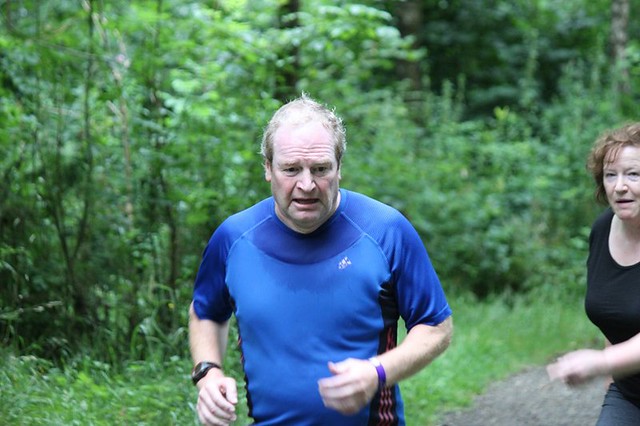 Three more to go, starting with Blackburn Road Runner Matt CHESTER in 31:58. This was Matt’s 5th (not)parkrun and he joins fellow Road Runner Kate Pomfret as the only Wittoners to record a (not)parkrun time every available week so far. Behind him was Brian FISHER, of the Long Distance Walkers Association, in a new (not)parkrun PB of exactly 32 minutes, knocking 18 seconds off his time from the very first week of (not)parkrunning last month – well done, Brian! Lastly for this week, Blackburn Road Runner and Witton 100 Club member Ian GOODLIFFE ran 36:13, in his fourth successive week of (not)parkrunning. Well done to all our (not)parkrunners this week in getting out and about despite the weather! This week, Karen ran her fastest time on Tuesday, Robert on Wednesday, Peter and Andrew on Thursday and Kate, Matt, Brian and Ian on Saturday! 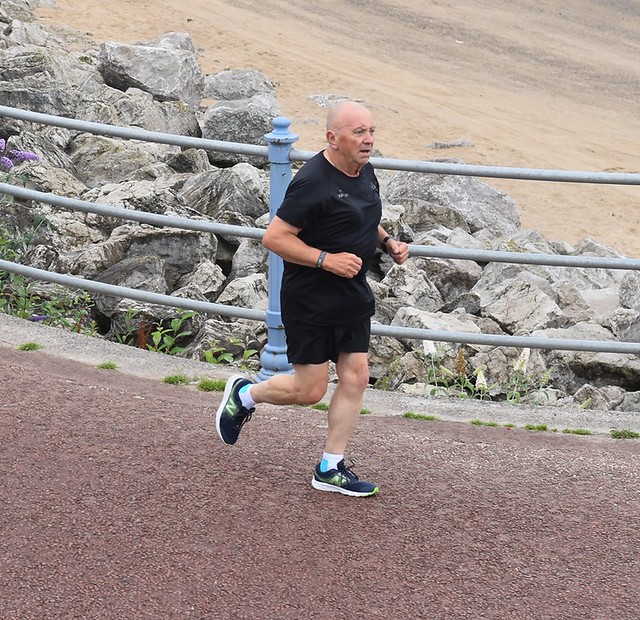 Ian Goodliffe has run a (not)parkrun each of the last 4 weeks – here he is in tourist action at Morecambe Prom parkrun last summer!

This week, we celebrate the parkrunniversary of someone who has become a wholehearted member of the Witton community in recent years, John KEARNEY. It was on July 14th, 2018 that John made his parkrun bow, at nearby Burnley parkrun when Witton was cancelled. He was encouraged to come by his cousin, Paul Allen, who had recently started coming to Witton himself, and made his Witton debut a week later at Event #135 on July 21st. Since then, he has run at 56 of the past 77 Witton parkruns, zooming up the attendance lists and becoming the 54th member of the Witton 50 Club in January this year. He is now up to 48th on the all-time Witton attendance list and has run 72 parkruns in total, running at 11 different parkrun venues, including most local runs and one at Leamington parkrun, where John is originally from. From a Witton debut of 35:12 in July 2018, he has now run 6 times under 25 minutes on the Beast, with a PB of 23:39 in February this year. In addition to his red milestone t-shirt, John has also purchased a Witton parkrun apricot t-shirt and has marshalled for us on 4 occasions so far, as well as moving up to run 10Ks and half marathons too. 2 years of parkrunning, John, well done, it’s just a shame your last 4 months have been parkrun-less!

This Week in Witton parkrun…

Another quiet summer week at Witton, what’s really becoming clear is that July is our yearly lull month before the excitement of August and the build-up to our birthday!

At Event #43 on July 16th, 2016, the big celebration was for Clayton-le-Moors Harrier Nerina Gill, who became only the 9th person to earn their red milestone t-shirt after running her 50th parkrun with us that day. It was only her 3rd parkrun at Witton at that time and she celebrated it with a new PB by nearly 40 seconds. Meanwhile, at the top of the field, Blackburn Harrier Karl Bilington was first home, with Darwen Dasher Andy Smith second and another Harrier, Joe Gebbie in third, the first time in 5 weeks that the front 3 had finished in under 20 minutes. 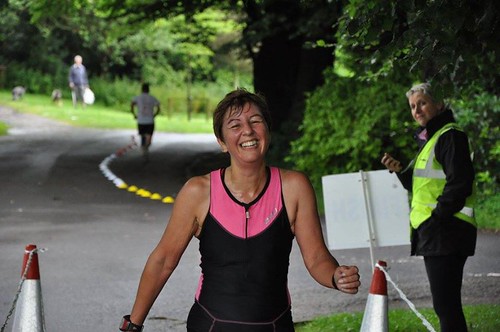 Nerina looks pleased as she crosses the line at her 50th parkrun!

Event #89 on July 15th 2017 took place under threat of rain which never arrived (as is so often the case at Witton). The week’s big celebration was for Lynda Vernon, who was running her 50th parkrun to earn her red t-shirt, 14 months after coming once, complaining all the way round and declaring she wouldn’t come again! Mum became the 29th person to earn their red t-shirt at Witton, meaning 20 more had been earned between this week in 2016 and 2017. She also became the second parent of someone who had earned a red t-shirt at Witton to earn the same t-shirt with us, after Izzy and Chris Chadwick. 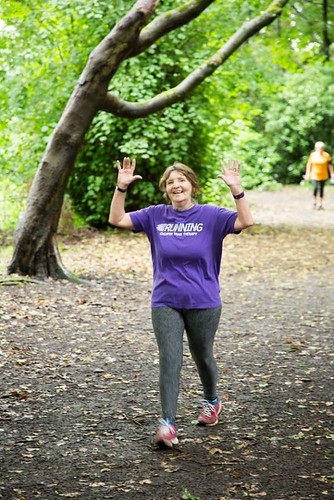 Alas, no pics from Event #89, but here’s mum in action a week later at her 51st parkrun!

Beginning a trend, Witton was cancelled this week in 2018 and the Searbys, Vernons and Scott Smith made the journey across to Worsley Woods parkrun on the outskirts of Manchester to try out a new venue. Worsley Woods is quite a picturesque route, along a long-disused railway line. It involves running under a couple of bridges and even running between two still visible railway platforms, before a picturesque climb through the surrounding woodland, before returning along the flat, straight railway line to finish where you started. A quick course, generally speaking, it was a little bit tricky due to the railway line forming the only main thoroughfare from one side of the woods to the other. This meant, in addition to parkrunners, the same path was being used by dog walkers, ramblers, other runners and cyclists, meaning once you’d finished, you had to pick your spot for standing around and keep your wits about you!

No pictures were taken the week we visited Worsley Woods, but here’s a typical shot, showing one of the railway arches and the old railway line which is now the course

Another second week in July, another Witton cancellation. Last year’s cancellation coincided with the Trailblaster event in Towneley Park, Burnley, which saw several Witton regulars taking part in that, rather than the parkrun that morning. This included Matthew and Lynda Vernon, Lorna Pickup, Corinne Surkitt, Jane Magee, Suzanne Peaker, Suzanne Ferrandino, Diane Harrison-Leeming, Julie Price, Hazel Baxter and the Searbys, as well as the Sinkinsons and Viki Walsh. Although we didn’t run the parkrun, it didn’t stop us popping along just after 9am in the morning to watch the parkrunners passing the first k marker, where we saw Gary Blackburn, Peter Nicholson, Karen Rishton, Tim Keely, Anwar Khan, Wayne Haworth and the Brennans. Oh, and Jane being Jane, she ran the parkrun and then ran a total of 30km during the Trailblaster event over the course of the next 12 hours! Astonishing. 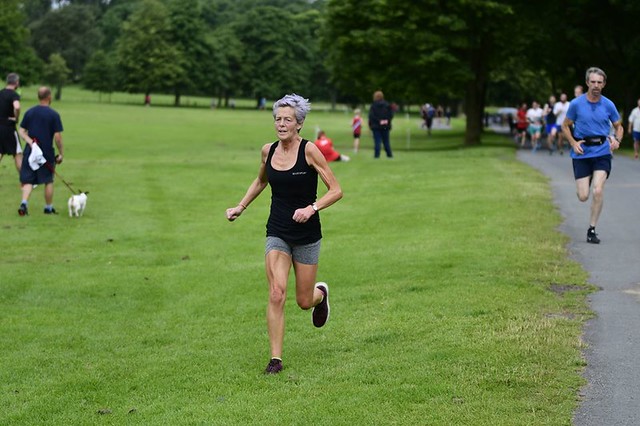 Jane sped round the parkrun course, before running another 30km over the course of the day 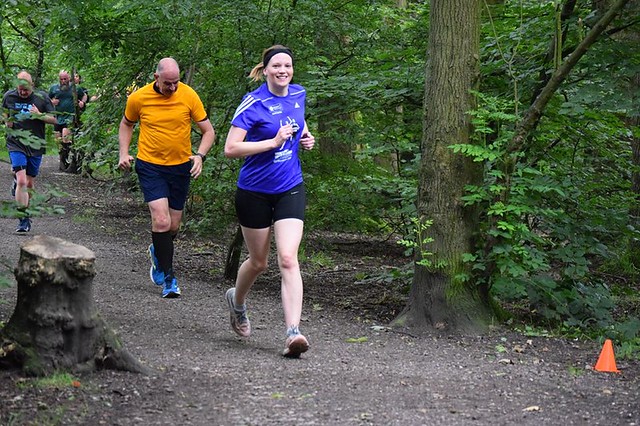 Lytham Hall was unusually busy with Wittoners, including the two Ians, Brodrick and Goodliffe, Lea Mellody, Carol Foy as well as Lisa Kit, who ran her fastest parkrun time in her fledgling career! Hayley and Sue Duckworth followed up Jersey Farm last week with Upton Court parkrun in Slough the week after, to earn a ‘U’ towards the Road Runners’ parkrun alphabet challenge. This meant they had earned all 25 available parkrun letters as no ‘X’s have yet been created! Finally, Cameron Ashton and Janice Parker ran at Horton parkrun in Bradford to tick another new venue off themselves! Parkrun tourism…another victim of the coronavirus! 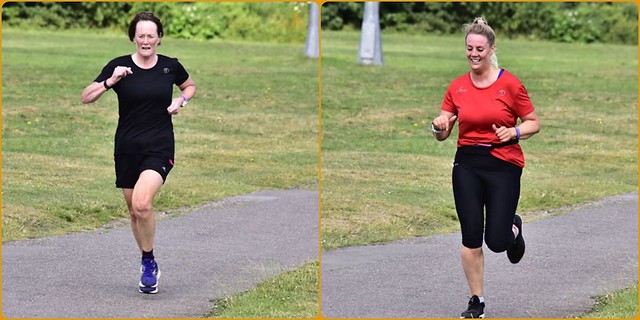 Sue and Hayley Duckworth completed the parkrun alphabet with a visit to Upton Court parkrun in Slough!

A last note for this week. Last weekend, I received a message from Witton 50 Club member Peter Nicholson, who wanted to tell me about his experiences running during lockdown. He’s invented a new game for himself, which he calls Witton parkrun Bingo! I’m sure lots of you have subconsciously been taking part yourselves, as you spot familiar faces out and about when running. Peter only counts faces he sees on his 9am Saturday runs (his parkrun runs) but has so far run into Andrew Wisdom, Bill and Jackie Dwyer (twice!), Lorna Pickup and husband Andy, Peter Toogood, Ian Clarkson and David Hurn! He also thought he spotted Josh Crowther speeding past too! Peter reckons this constitutes a line and perhaps approaches a full house for Wittoners but what do we all think? Can anybody top Peter’s tally for Witton faces spotted? I think I’m only on 3 thus far, but as I never make it down Witton way, I think that’s not too bad going! 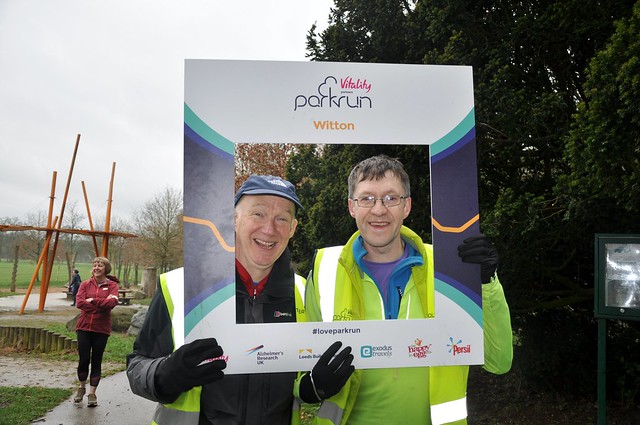 Peter hasn’t mentioned seeing Bernie Johnson out on his runs – maybe next week?!

Anyway, that’s me done for this week. Stay safe, follow the local guidance so we can avoid another lockdown and have a good week!

We’re getting through this together. 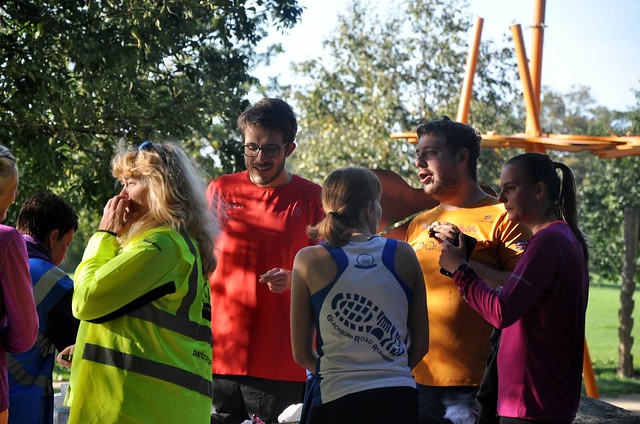 I’m missing all my parkrun friends