Where to start this weeks run report, the 590 runners, our second highest attendance after last weeks 595, or the 98 runners who ran the fastest 5km of their lives! Could it be the 56 people who came along for their first 5km parkrun. How about our amazing regular parkrunners, 162 of whom have completed over 50 parkruns and ran this week again! Should we focus on the 88 juniors who ran this week who'll be the future of the UK's running community and running past old foggies like me, and running their own events in the future. There's just so much good coming out of parkrun at the moment its hard to keep up, and put the spotlight on one particular aspect. As I think Tom Williams once said on Marathon Talk, "its relentlessly positive" (oh its a brilliant podcast to listen too for more running tips and news too)!!

There were 47 volunteers this week, and they did a great job managing the temporary course we're using and the massive attendances we're getting. We're fine tuning as always, constantly tinkering with things. This week there were new signs, ripping up a few stumps and roots during the week, we even widened part of the course courtesy of the Thursday shovel crew Gerry Rudolf, Rich Drewett and I. As always if you've got an idea we're listening, and you may have seen me doing a bit of that this weeks run :0)

Megz was our Run Director, with another change to proceedings, we were using a new rock'n'roll amp that Mike Smith brought up, thanks Mike. I don't think we even had it turned up to 11 (Spinal Tap style). So once Mike had us plugged in "ready to rock" she gave a shout out to the runners hitting their 50 Milestones this week. Well done to you all!!

We gave all the usual warnings dogs on lead, be nice, keep your under 11's close. There's a lot to cover each week, so thanks for keeping quiet and listening and let us know if you need us to turn it up, as we now can. If you ever want to get a shout out come see us before the run and we'll do out best to fit it in.

So we headed down to the gate to start the run, and Derek Hobby and David Gray checked the path was clear for everyone's start sprints to Ed's Corner. Where was Ed though, well he was doing a bit of parkrun toursim over at Corby parkrun. Well it’s a sprint for the first few rows of runners and a jog or walk for lots of others, before getting into our strides around the course. 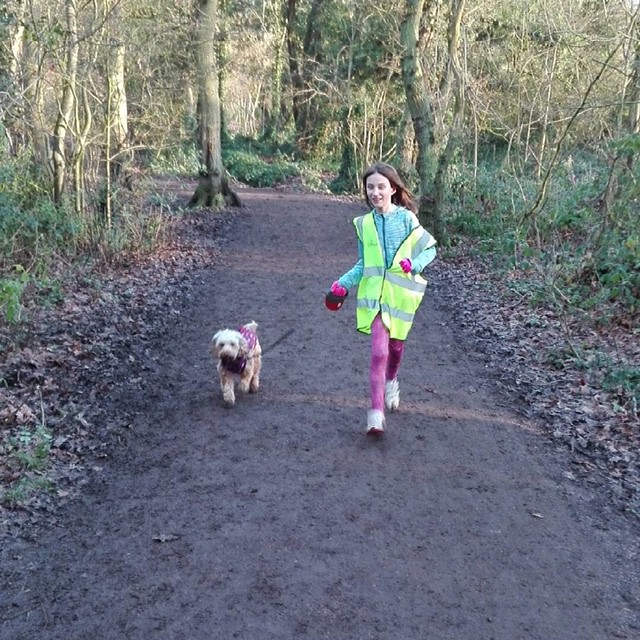 I stood on Carole's Café Corner just inside the woods, with Amber and saw you all come by. Its difficult to know what to shout at this stage as "well done" seems a bit naff after 200 metres, so just went with "hello's" to everyone I knew, which is a lot of you and I wish knew all of the runners, but we're too big for that now. As Natalie and Emily Seyler, our tail runners, went by Amber (my dog) decided it was time to join in, so we joined the tail runners for a lap and saw the leaders hurtle past around Troll Bridge.

Special mention to the guys who took 10 seconds off their PB's from last week Adam Harris with a 19:49 and Rich Bentley 26:31. Also once you get a bit older it gets harder to get a PB, now David Ryder is still in the same age group as I am M45-49 so still in our prime. That said a PB after 224 parkruns is pretty special so well done David on your 21:20 beating your first ever parkrun time and PB, on 16th June 2012 by 2 seconds.

We love getting a message on the Facebook, we don't all use it and I wanted to share all the positive comments we had this week, it really meant a lot to all the team.

Worcester parkrun:
590 runners today, lovely morning. We've adjusted a couple of times due to funnel duckers after position 358, thanks to all the volunteers, and you the amazing runners!!!
Sarah Beaudro:
I was so tempted to stay in bed this morning when I looked at my phone and it was showing as -4 thankfully I gave myself a kick up the bum and achieved a new PB on my 29th parkrun! Thank you for the huge effort that goes into running it every Saturday
Lynsey Hall
Thank you everyone for coming out on such a cold morning.
Reply: Siân Thomas You were fab this morning, well done
Nicholas Smith
Thanks for a great run this morning, got my 11 yr old nephew round in a PB of 28:36 so well done Harvey Smith and thanks for all the hard work everyone !
Jim Wyatt
Great morning thanks to all the volunteers you did an amazing job on the course this morning see you all
Gerry Taggart
As usual, Worcester Parkrun's spirit was high. No wonder so many people want to run. Many thanks to the marshals.
Derry Steph
2nd park run this week, really enjoying it, big thanks to all of the volunteers who make it all possible, especially when it was so cold and frosty this morning! x
Gail Berry
I managed to come in at position 349 for two weeks running.
Thanks volunteers and Corp team for all your hard work
Emma Kerton
590!!!! Woohoo! And because of you organisers and volunteers Worcester parkrun ran like a well oiled machine....Many thanks!
Steve Nicoll
I stupidly tripped on a tree root today, and whilst only my pride was hurt, it had to be when I was going well!!
However I would like to thank all those runners and marshals who took a moment as they ran past to check I was ok
It was nice to know people care...See More
4 Replies
Reply Geri Jones: Hope you ok? If it's any consolation I am in agony!!! Great time again though Jamelia and alexia did awesomely!! X
Reply Richard Ralphs: Hi Steve, hope you're OK, let us know where it is and we'l see what we can do about it. Ironically we pulled up one of the tree roots that has been these since we started this week.
Reply Steve Nicoll: Thanks Richard I am fine, just a dented ego!!
I fell as you get to the top of the course about 2/3 way round by the big tree just about 50 m before a bridge
But honestly there is no panic it was defo my fault not picking my feet up so I wouldn't worry
You have enough to consider
It gave us all some thing to laugh about at the end
Great run, lovely people
See you next Saturday
Reply Laura Plummer: Was just in front of you and turned to ask if you were ok. I carried on running when you said you were, so I'm pleased to hear that you are. That ground must've been horribly hard to fall on!
Ben Pearson
First park run for me today, and it was awesome. Thanks to all the volunteers who help make the event possible
Geri Jones
Had another good run today only our second all achieved new PB's. So proud of my two daughters who did fantastically
Fiona Curnow
Sorry to miss this week's but I had a good reason! Well done James Bruce Busby and Steph Sheppard who I see improved on last week's times!!
Wendy Pickess
Thank you to all the volunteers putting up with the cold weather for us - hope you thawed out quickly!
Ian Danby
Top job on preparing the course and very impressed with the new pa system. My old ears could hear every word this week.
Duncan Kings
Great run. Massive thanks to the volunteers!
Ann Gray
Our first cold run for ages. Thanks to all the volunteers. It was even colder for you!
Mick Smith
Mick Smith Hope you're happy with the PA. I'll bring it every week if you like. For weeks I can't make it probably worth dropping to someone earlier and letting them know how to set it up. Thanks for a great run!! Mick
Worcester parkrun Hi Mick, thanks the amps were brilliant, and if you're OK to bring it along it would be amazing, I can help when you're not around if you can still loan it to us. I think everyone noticed a big difference in the volume and clarity this week. Sorry I didn't get a chance to thank you in person I got waylaid. Perhaps we should have a rock week for our 250th parkrun, all the best Rich
Claire Nichols
Thank you to all the volunteers and especially to those who take time to prepare the course

Thanks again for those messages, classic ending with a Funnel Ducker. We will see you next week with a little surprise up our sleeves.

The Stats Bit
How Many?
This week there were 590 runners, of whom 56 were first timers and 98 recorded new Personal Bests.

564 runners registered there results, leaving 26 as unknown as the #DFYB'd

There was an average of 24.48 finishers per minute

Today's full results and a complete event history can be found on the Worcester parkrun Results Page.