We all love a good celebration at Worcester parkrun and there is always plenty to celebrate. Today was certainly no exception, we arrived as the mist had lifted and the sun was shining across thepaddock.

Signing in for volunteering was very busy due to the boost in volunteers from Black Pear Joggers. There was ample enthusiasm as the woods were lovely and dry and there were lots of pacers so this meant PB potential for some or just a nice dry run for a change for others.

The Run Director today was Pete Darwen from Black Pear Joggers. Pete is an avid parkrun tourist having notched up 66 different parkruns, but I am sure Pete will still tell you Worcester parkrun is the best!

As usual we had some parkrun milestones to celebrate, there were some big milestones including Rob Plumpton celebrating his 250th parkrun.

Despite the dry conditions, the park warden had requested we keep to the Winter course this week, so we all started at the bottom of the driveway. So, a hill start it was, the Winter course is like marmite for the regulars of Worcester parkrun, you either love it or you’re not too keen.

There were over 672 runners/walkers to come up the hill towards the woods, amongst them were the various pacers, there were also some new/returning runners who were satisfied with a single lap, to ease themselves in slowly. The fast runners shot off effortlessly up the hill and disappeared very quickly into the woods. At the rear was parkrun regular, octogenarian David Pearce who recently celebrated his 150th parkrun followed by tail walkers Jo Evans, who has only recently given birth to a beautiful baby girl called Poppy, accompanied by Shaun Paskin. 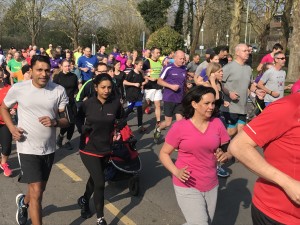 At the entry to the woods there was a warning sign about bluebells. The woods were lovely and dry but unfortunately, there was no sign of bluebells apart from the warning sign of course! The course was busy but soon thinned out on the down-hill stretch. The support along the way from marshals was as usual fantastic and there were plenty of greetings and chatter between runners.

Towards Badger’s Hill on the right a tinge of blue was spotted perhaps that’s those bluebells starting to make an appearance. Close to the top of Badger’s Hill we were greeted to plenty of birdsong, perhaps they were cheering the runners along with a little tune. 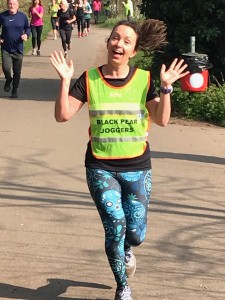 At the end of the second lap some of the pacers, including myself had to slow a little being slightly ahead of pace. The runners following the pacers sprinted into the finish at the rear of the café and what a lot of PB’s there were and many other got their best time for a few months! A special mention to Andy Gandon, with a PB of 20:35 on his 150th parkrun and an age grade of 80.73% and Paul Townsend, who got a PB on his 100th with an age grade of 63.18%!!

There was a buzzing atmosphere around the café afterwards with the runners, volunteers, family and friends soaking up the lovely morning sunshine. Roll on next parkrun day!

Thanks Ann for that run report, its great to have new perspective on the parkrun, if you ever want to share your run story just let us know at wocester@parkrun.com