There was one big decision that had to be made before this week’s run, and that was whether or not we would go ahead given the current situation. The Worthing parkrun Core Team work so well together and these are uncharted waters for us all, but after some deep soul searching and exchange of messages, we all agreed that we should proceed. For one, we all know the benefits that parkrun brings to so many people for so many different reasons – and for another, we are in the open fresh air (usually with a fresh breeze t’boot). And for another, it’s not compulsory and it’s free – plus it was being supported by parkrun UK.

We were, quite understandably, lighter in volunteer and runner numbers this week, but for those who came along to support this wonderful institution, I would like to say a huge thank you. 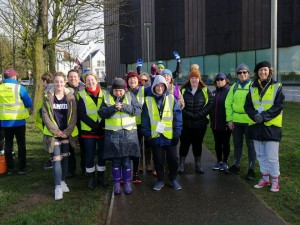 We are always on the lookout for people to take on different volunteering roles, so it was with great pleasure that we welcomed one of our Worthing parkrun stalwarts (both runner and volunteer), Ian Schiffer to the stage as Run Director. As it was his first time out he shadowed Mike today, but will be on his own next time – Thanks for stepping forward Ian, you will make a great RD 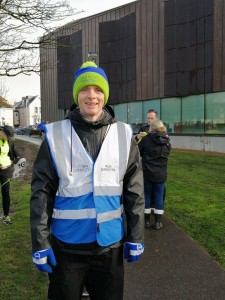 So onto the Run Briefing. Now I know that it isn’t everyone’s cup of tea, but it’s a really important part of parkrun and everyone needs to pay attention to ensure everyone remains safe. So what a great addition these are to the parkrun paraphernalia. (the signs that is) 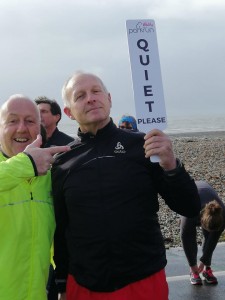 This week was especially important for two reasons. Following the overnight rain, runners were informed about changes made at the finish owing to the waterlogged grass. Also, and more importantly, to avoid our volunteers on Barcode Scanning duties having to touch barcodes and Finish Tokens, runners were asked to just hold up both for scanning and then drop the finish Token into a bucket. Thanks for your co-operation with this.

The run itself was another success with 344 people taking to the prom to walk, run or jog (or maybe even a bit of all three) the course. The weather was pleasant enough to encourage 33 First Timers and enabled 38 Personal Bests to be recorded.

There were also a couple milestones out on the course today. Congratulations go to Benjamin MILLER and Paul REYNOLDS for hitting their 50th parkrun milestone (looking forward to seeing you both wearing your Red 50 Milestone t-shirts next time out)

With all the runners back it was time to pack away and get on with sorting the Finish tokens ready for next time – But not so fast. This week we thought it best to disinfect the Finish Tokens before they were sorted by Sue, Ben and Kayleigh.

So, as the sun came out, Chris, Sharon, Ian and I wandered over to Coast for a post parkrun coffee/water (and maybe cake) while processing results. One problem – we were missing one set of data from our Barcode Scanners! With time running out on the car park ticket, it was decided to ‘deal with it later’. A short while later the missing results arrived via WhatsApp (don’t you just love technology – if only I understood it!!) and Sharon was able to process the results back at parkrun ‘HQ’, ably supported by a bacon sarnie and a cuppa. All’s well that ends well

This week we were celebrating International Women's Day #IWDparkrun and there are some great photos of our event with the This Girl Can selfie frame on our Facebook page!

We also celebrated our stalwart volunteers Sue and Ben Swan reaching the amazing milestone of having each volunteered on 50 separate occasions at Worthing parkrun - that's a lot of token sorting (which is their favourite volunteer role) in the café after parkrun!

You may also spot a photo on our Facebook page of the Leeds Building Society #BigCommunityRelay gold baton. This week's RD Belinda had rather excitedly managed to get her hands on this at Clevedon Salthouse Fields parkrun the previous Saturday and it has now been passed on to tourist Jill Taylor who will be taking it to Blyth Links parkrun next week!

532 people ran, jogged and walked the course, of whom 56 were first timers to parkrun or to Worthing and 124 recorded new Personal Bests. Representatives of 40 different clubs took part.

The event was made possible by 34 volunteers & special thanks go to Carol and Sue and the other members of local running club, Worthing Running Sisters who volunteered this week to celebrate #IWDparkrun:

It was great to see so many people brave the 40 mph westerly that accompanied Worthing parkrun this morning.  Today, 356 of you ran, jogged, walked, and 30 wonderful people put themselves forward to volunteer and make parkrun happen this morning.

There were 42 new faces at Worthing today. To all you first timers and tourists a very warm welcome was given  - great to see you and we do hope to see you again.  A special shout out to Dan Goodwin ED from Catton Parkrun who joined us today with a few of his team - we hope you enjoyed the run home. 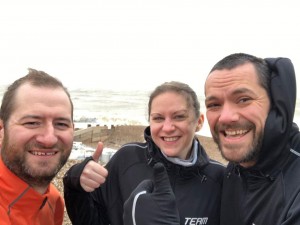 A special mention to Paul Hurley from Worthing Striders who celebrated his 100th park run today with a very tidy 24 minutes.

I make no apologies for now focusing on the 30 volunteers that made parkrun happen today.  Running in today's conditions was hard - I wager that standing and volunteering is harder.   Without exception every member of the volunteer team today played their part with good humour and passion and I say again that parkrun would not happen without you.  If you run regularly and have never volunteered I would encourage you to give it a go - it really is possible to do both.

Today, my shining example is CHRIS SULLIVAN. Chris has run on 63 occasions and has volunteered at 38 events here at Worthing, carrying out 54 tasks - today he completed 3 tasks and managed to run..... it really is possible and Chris, on behalf of the Worthing Core Team our sincere thanks.  I would have posted a pic but clearly he was too busy to pose

All of our volunteers are heros and I would like to thank them all today - here they are...

Our first timer numbers were swelled this week at parkrun, thanks to a number of tourists who were visiting for the Worthing Running Festival on 9th February. Unfortunately Storm Ciara had put paid to the Running Festival, but Richard Xerri, the organiser was at parkrun to update everyone on when he hopes to get the runs rescheduled as well as handing out free buffs to anyone who had bought their race chip along to return. The race chips cost the race organisers a lot of money so please remember to return them.

Talking of returning things - we had a very old finish token returned this week! One of our runners, who told us he last did parkrun about 4 years ago (so before Worthing parkrun had even started!) went over to the barcode scanners with his finish token from today's parkrun and also what he thought was his athlete barcode. What he actually had instead of his barcode was a very worn and faded finish token from the last time he did a parkrun! Hopefully he won't wait another 4 years before doing his next parkrun and hopefully he'll also bring a printed version of his actual barcode next time so he can get a result!

Don't forget there are lots of ways you can bring your barcode along to parkrun, so as well as printing one off from your computer, you can also order cards, tags and wristbands from parkrun all printed with your barcode which you can use at the scanners. You can also get a water bottle with your barcode on too, although this will not scan of course!

This week 499 people ran, jogged and walked the course, of whom 69 were first timers and 95 recorded new Personal Bests. Representatives of 41 different clubs took part.

On Saturday 7 March 2020, the day before International Women’s Day, lots of parkruns around the world, including Worthing, will be hosting a female-focused parkrun celebration. #IWDparkrun will be supported by This Girl Can, a campaign created by parkrun partner Sport England.