The steps! - love them, hate them, barely notice them, whatever your feelings towards them, they are certainly one of our most (in)famous course features. Is there super special technique to getting up them for an awesome time (excluding grappling hooks, chair lifts or Uber), what should we call them, how many are there???  These are just some of the questions that comes to an RD’s mind when they have too much time on their hands and a non-run report needs writing. 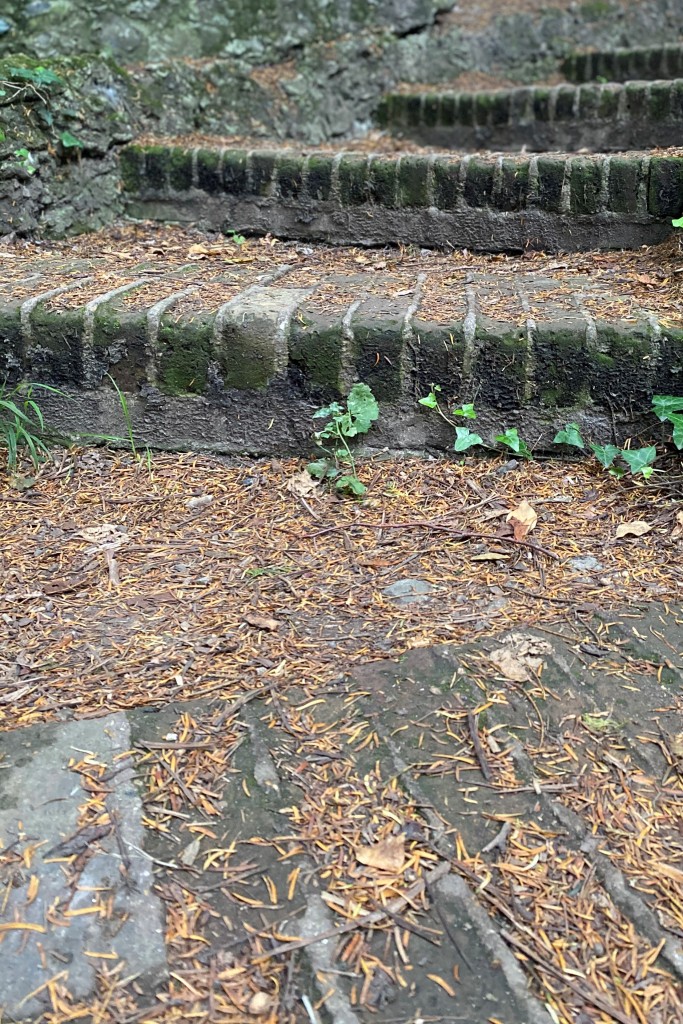 So, with such puzzling questions befuddling this poor RD he set out to find the answers by asking you, our wonderful Wycombe Rye parkrun community. 272 of you responded to the survey (sorry to the one person who’s results I cannot access as you were respondent 101 via the first link – limitations of the free version), giving a total of 271 accessible and usable answers; and some great answers we did receive.

Before we dive too far into the results, we should probably mention that because of time, software and various other reasons, this would hardly fall into the category of rigorous scientific research and I’m not prepared to do the statistical analysis required to determine whether the results and differences between data sets are statistically significant – after all, the guiding principle of parkrun organisation is “keep it simple”.

What should the steps be called?

“The Steps” – such a little name for something that are such a prominent feature.  They have been referred to affectionately, with respect and in fear by many additional terms by RDs and runners alike in various terms.  This seemed an ideal opportunity to settle the debate and officially name the steps. There was a clear winner, with 49.4% of the vote:

The Steps of Doom 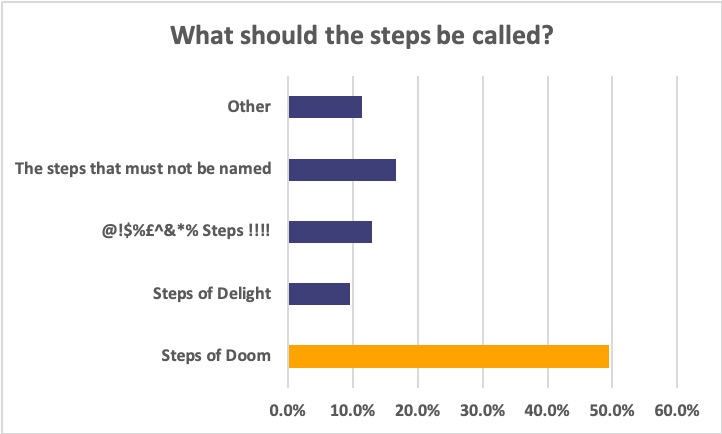 Whilst there was a clear winner, I think there are a few stand out alternatives that were suggested by our runners that deserve a mention:

Do you know your steps?

Despite 13,433 runs being completing Wycombe Rye parkrun with each runner completing an average of 9 runs since we first started, meaning that a total of 282,093 steps have been climbed (enough to have climbed the Eiffel Tower over 418 times), the answer comes out as a resounding “maybe”.

Whilst 4 of you barely noticed that there were steps on the course (I’m thinking this is a case of bravado) and 11% thought trekking up Everest would feel shorter (we are fairly convinced this isn’t the case (according to the BBC you need to climb 85,238 steps to ascend the same height as Mt. Everest, which means we have collectively only climbed it 3.3 times), there was a tie between those who thought there were 17 and those who think it is 21.

There are 21 steps! – I counted them three times to make sure! 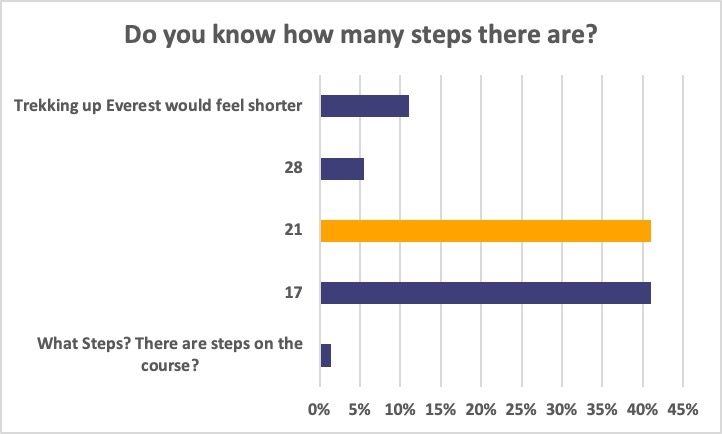 A little bit about who answered the survey

Whilst I said this wasn’t a scientifically rigorous study, the good news is that we did have a good number of responses that covered a wide range of parkrunners at Wycombe Rye, with plenty of experience that they collectively will have shared with 78% having completed the steps at least 10 times. 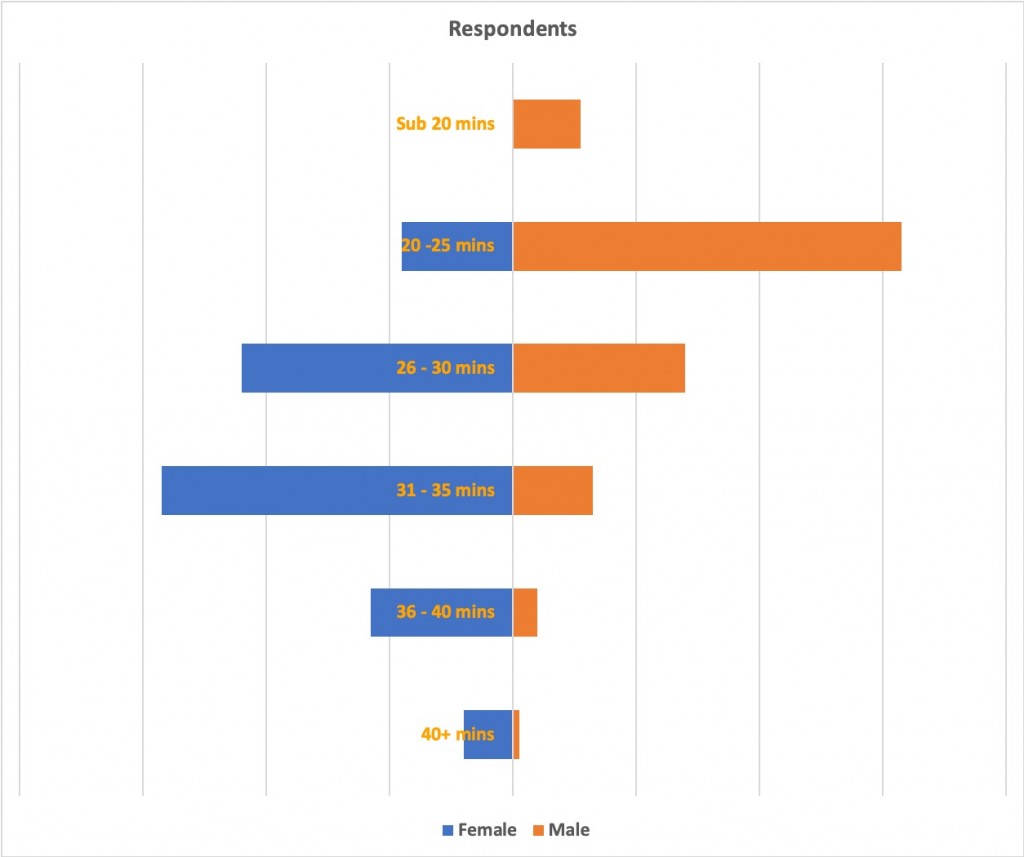 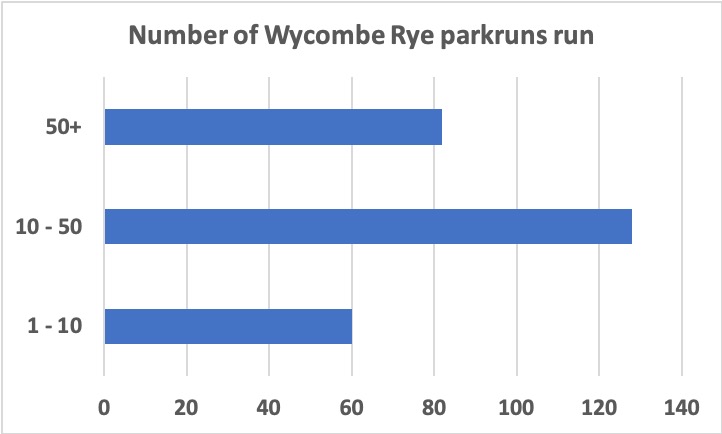 So how do we get up the steps?

Almost every combination of options was chosen by at least one respondent – although I’m a little bit lost by the three people who said they went up two steps at a time via the muddy bit beside the steps (there aren’t steps there, unless I have missed something?).

The most popular option to getting to the top of the steps was to slow down slightly and resort to a “light jog” at 28% with 11% opting for a full sprint.  What is perhaps more interesting is that whilst the majority do have a routing preference, the largest singly chosen option (33%) for routing is “I don’t think about it – getting to the top is all I can think about”.  Perhaps this leaves room for many of our runners to experiment a little and find a PB option?  What I was delighted to see was that only 3% felt like they were on their hands and knees to ascend. 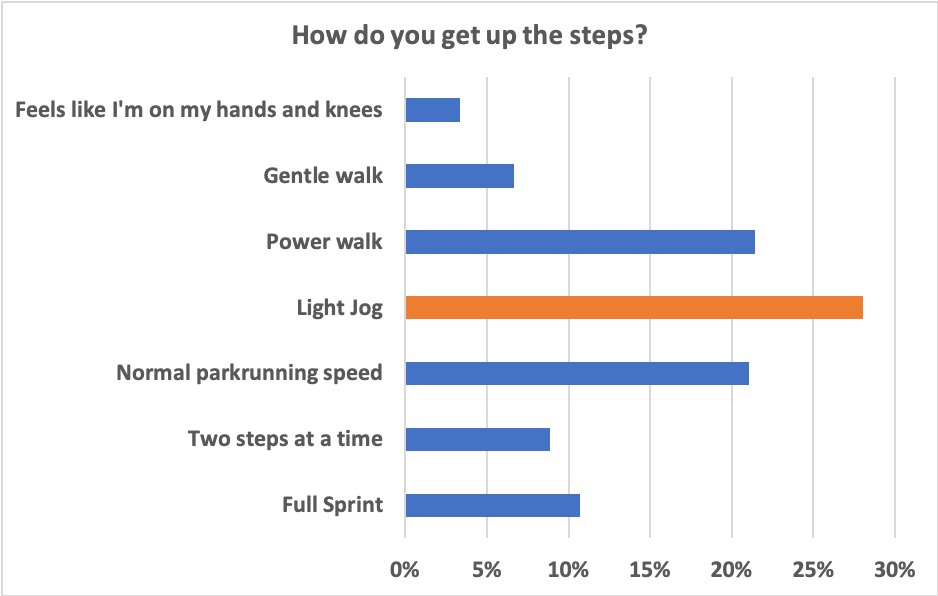 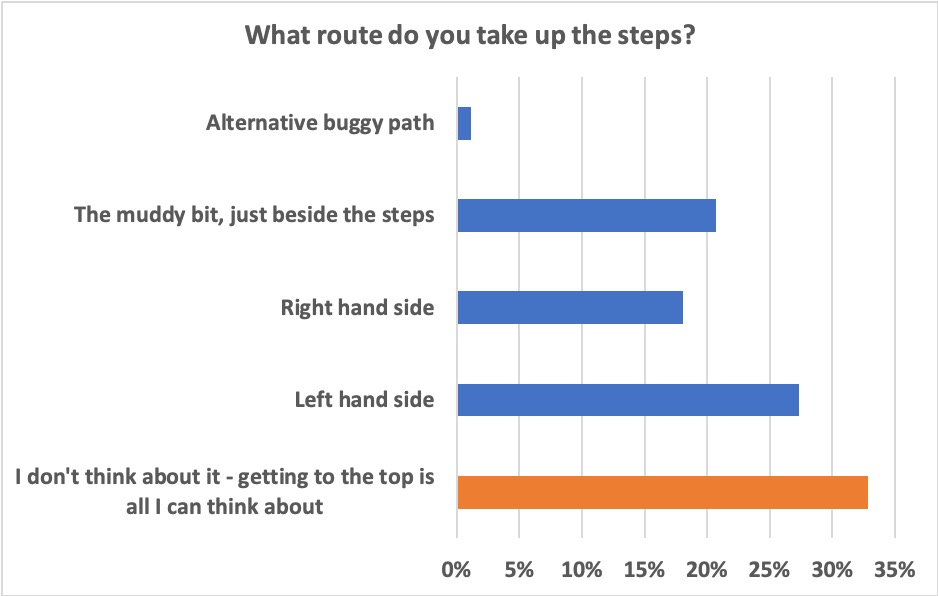 The magic combination – does it exist?

Unfortunately, it doesn’t appear there is some magic combination of approach and route that will guarantee you a faster time.  It appears that the muddy bit, just beside the steps is most favoured by those runners between 20 – 30 minutes whereas the slowest runners are focused on the achievement of getting to the top rather than worrying about shaving a second or two off by experimenting with different routes to find a preference. 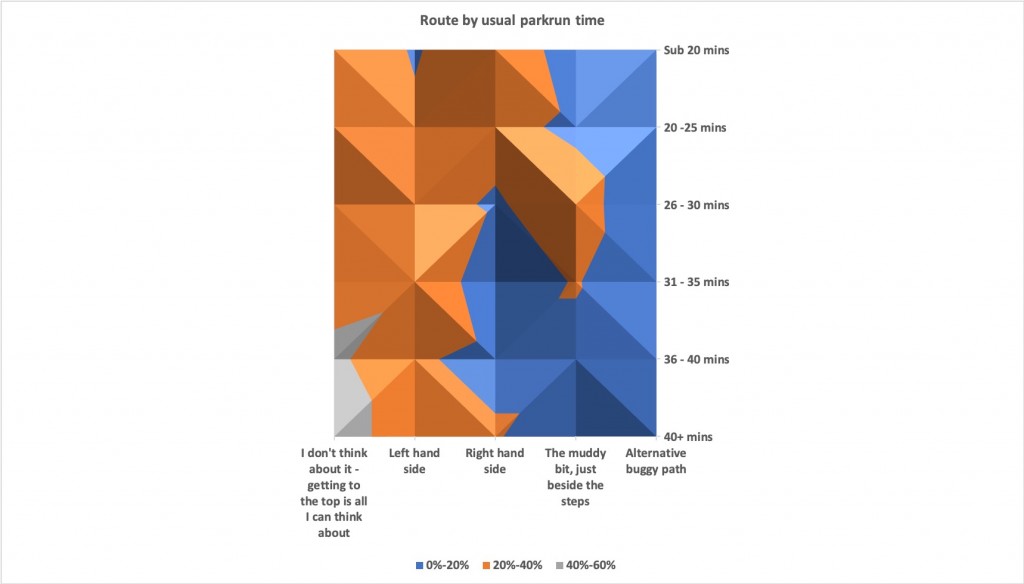 Perhaps unsurprisingly, as runners’ speed increases they appear to be more likely to take a more aggressive approach to climbing the steps with the slower runners more often opting for Power walking and the sub 20 minute runners not breaking stride or going for a full sprint – that’s not to say that full sprints are confined to the sub 20 minuters, there was one respondent who completes in 40+ mins and tackles the steps at a full sprint – epic determination there, we have to applaud you for that. 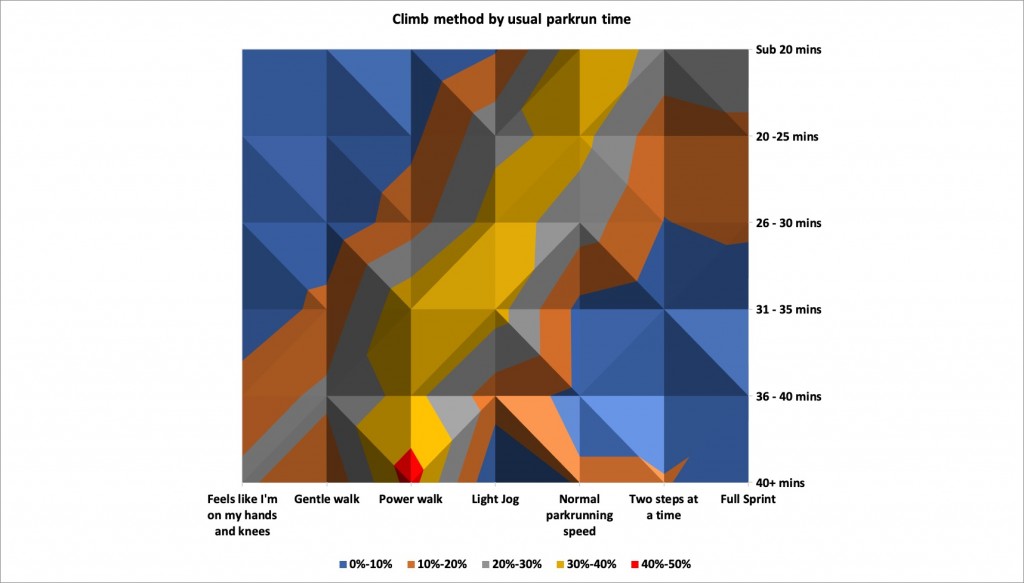 So, in summary, what have we learnt?

I think the only thing that we can say with absolute certainty is that once we return to parkrun, hopefully not too far off into the future, there are many more steps to be climbed, legs set on fire from the effort and the Marshal at the top occasionally hearing some colourful language about our most (in)famous course feature.

Douglas Gordon
Non-Run Report Writer & RD with too much time on his hands.