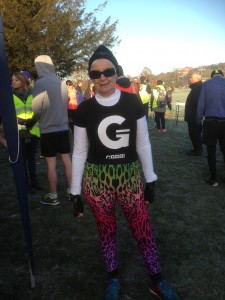 Ann Eardley-Wilmot
Number of Parkruns: 139
Favourite Parkrun and why:
I’ve had some great times visiting other Parkruns, my PB was at Leicester’s Victoria Park for instance, but, I think my favourite has to be last year in Canada with my granddaughter Lucy when we did three, one of which was Whistler, when we were warned about bears! We didn’t actually see one until later the same day but it certainly made you keep your wits about you.
Why did I start parkrunning:
My first was in 2008, I had done the couch to 5K around the streets of Marlow and we were off to Portugal for 6 months later that year and I wanted to do a “race” before we went. One of my sons enrolled himself, his brother, who are both runners and me to do Bushey Parkrun. I turned up feeling very excited with all my family there for support. Mike and Jem promised to stay with me and they did despite me saying I couldn’t run on grass! And coming in last when even my grandchildren were embarrassed and the team had put almost everything away. There was no Tail Runner in those days but they did manage to smile at us. My next effort was in 2016 when I joined Mike again on his home PK of Rushmere, although this was my worst result I got the bug. He told me to look for the one near me which had late finishers so that I wasn’t a nuisance. I came to Wycombe anyway and was welcomed by Rebekah France who told me I would never be last – I did get to know a lot of Tail Runners though! Doing this was part of my training for 50k of the Thames Path Challenge - walking of course.
Number of Volunteers: 19
Favourite volunteering role, and why:
My favourite role is finish tokens because you get to meet everyone and they are glad to see you and I also like marshalling at the waterfall watching everyone go by looking hopeful and if you’re lucky you sometimes get in the coffee queue early. 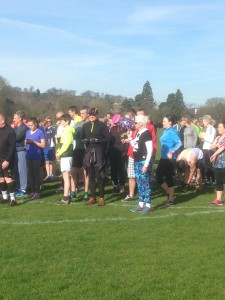 Favourite/funniest parkrun memory:
I guess my two favourite Parkruns are firstly, when I ran on my 75th birthday in March 2017 and in March 2019 when I ran my 100th. On both occasions I was supported by my family who are now used to me wearing bright, gaudy leggings and on the second occasion my grandson nearly got me a PB. He kept saying you can do it Granny then his Dad and Uncle turned up just after the playground and he and his cousins ran off. The older generation of the Sharman’s didn’t have the same effect.
What does Wycombe Rye mean to me:
I didn’t know anyone when I started in August 2016 but it didn’t matter, Kate Rogers and her daughter Elizabeth were the tail runners on that first occasion and I now feel I know them really well, I met Bob Engel quite early on and I would like to think we are now firm friends. This is surprising since he was a very good runner and I never have been but I am hoping we shall still be doing Wycombe Rye Park Run when we are 80.
I have been a member of loads of organisations over my lifetime but never one which has such a diverse membership in every way and yet all these different people are friendly and encouraging even to slow people like me – so thank you very much for your support.
What do I miss about parkrun:
The turning up every Saturday and looking out for all the people I’ve got to know, doing my best for 45 minutes and having coffee and a chat afterwards.
What walking am I doing now:
I’m very proud that I have twice walked from Marlow to the steps on our Parkrun Course – something I’ve been hoping to do for ages - and back home again. I feel very lucky that I can do so many different walks from home it is doing them which has kept me sane over the last months.
What is the best bit of walking advice you have been given:
Don’t only walk on the Thames Path – walk the Chiltern hills as well. You can only do 50k in a day if you are fit and you don’t have to do the distance before the event. I am not sure I could do it now but I do still make sure I walk up steep hills on most walks.
What is your favourite walk apart from parkrun:
That is very difficult as I enjoy them all but walking to Hambleden on the riverbank and back across footpaths to Rotten Row, Bockmer End, Marlow Common and home is a favourite as well as the Jubilee River from Maidenhead to Eton and back.
What walk would I most like to do in the future, and why:
The Thames path from the Thames Barrier to Runneymede – but not all in one day! Because I thoroughly enjoyed the Runneymede to Henley Thames Path Challenge in 2017.
What is your most essential/favourite piece of walking kit, and why:
My gaudy leggings. They get me out of bed and encourage lots of comments and as I say “all the gear but no idea” 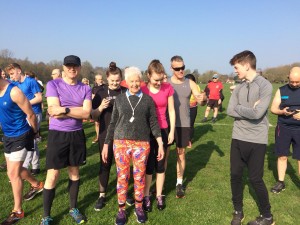 What is your favourite/funniest walking memory:
Completing half of the Thames Path Challenge with my three sons and with David, my husband in the support vehicle. David turned up with lunch and encouragement at all the stopping points as well as driving us all to the start and home again afterwards. Once my sons accepted that we had to go at my speed they relaxed and acted just how they did when they were kids. We had a great day and thanks to all the donations from friends and family we were able to give lots of money to the Sue Ryder organisation.