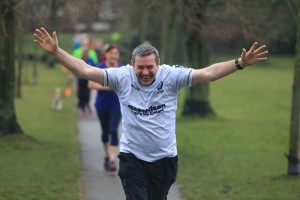 Favourite parkrun (other than Wycombe Rye, obviously!) and why:

I have ran only two other parkruns one being Henley on NYD, but out of the two I guess it would be Taunton Longrun Meadow just because the course was flooded (far worse than the Rye), but I somehow got my best time up to that point.

Why did you start parkrunning:

Following a heart attack in Dec 2016, I decided I needed to work on my health and fitness in order to prevent further cardiac problems, the heart attack being my second coronary angioplasty in just over 3 years. After completing Cardiac Rehab and then Wycombe Wanderers FFIT (football fans in training) courses covering such aspects as diet, nutrition and fitness; parkrun seemed the next natural step, initially to help reach step targets but also to increase my exercise levels.

I had been a bit of a casual runner when I was younger, running several local half-marathons during the 80’s with my last being the Wycombe half marathon in 1993, since then family and other distractions meant that I hadn’t ran again until joining parkrun in Oct 2017

Favourite volunteering role, and why:

Tail-walker because I can keep up my step count and you get to talk to, find out about and encourage the slowest person – they’ve all got their own story behind what they hope to achieve and having been through the process this is a great way to give that same support back to the community.

While under general anaesthetic during a minor surgery I had experienced some atrial fibrillation so ran one Saturday wearing a 24 hour ECG holter heart monitor with the consent of my Cardiologist. Because it was a hot day and I didn’t want the electrodes to rub loose I ran without my shirt … this attracted a few comments and a fair bit of attention with a small posse nurses who followed and guided me down the finish funnel!

What does Wycombe Rye parkrun mean to you:

Without doubt the support, encouragement and friendships, I would never have got beyond my first run without being made to feel so welcome. I also found right from the start that having a timed set course helped to track my progress and set targets for continued improvement, plotting my times on a spread-sheet and seeing the curve dropping week by week helped no end to keep up my motivation and strive for better results.

What do you miss about parkrun:

The comradeship, support and encouragement from my fellow park runners. I live on motivation and find running on my own so much harder.

What running are you doing now:

I try to get out for short runs during the week and maybe a mega longer (up to 14K) alternative parkrun on a Saturday morning.

What is the best bit of running advice you have been given:

Not really advice but encouragement. I was still pushing myself hard but walking great lengths of parkrun due to angina pain when Andy King helped and gave me the belief I could run a full 5K simply by pacing myself and breaking the run down into smaller chunks … I’ve not looked back since, thanks Andy!

What is your favourite run other than parkrun:

I think it will have to be the Ridge Off Roader 10K, the start/finish are exactly where I had my heart attack. Last year this was my first serious run other than parkrun since the 1993 Wycombe half marathon and it was particularly pleasing to be able to run this with many friends that I made through Wycombe Rye parkrun. In the process I raised a further £1,444.00 towards cardiac rehab. bringing the total to £3,461.00 over 3 events.

Special mention must be made of my own ‘Attack the Attack’ run that I have now ran 5 times with 10 members of the ‘Your Pace or Mine’ group. This is the original 11km walk around the Radnage area that led to my heart attack and has now become its own established event, even to the extent that Kris Chaplin produce the special heart shaped medal with a flashing pulse! – Warren Bennet being the first replicant of this prestigious award and the latest your own race director Ruth Walne!

What run would you most like to do in the future, and why:

My ambition fairly simple - to get fitter enough and confident enough to be able to run my first half marathon since 1993. Although not feeling ready I have now decided to run the Maidenhead half marathon course late September as a fund raising effort for Hearts & Souls whose own activities this year have been cancelled due to COVID-19, if you would like to support me on this challenge please visit my JustGiving page

What is your most essential/favourite piece of running kit, and why:

That’s must be my white WWFC shirt. This was given to me when I started the FFIT course and I have worn during nearly all my exercising throughout my rehabilitation. It is symbolic of all I have achieved in the last 3.5 years going right back to those first tentative short walks down the road and back during my convalescence.

What is your Favourite/funniest running memory:

My favourite moment was that final stretch down the road and to the finish line of the Ridge Off Roader, I have never felt so emotional or pumped with adrenaline on a run (and I was determined to run) than covering that ground recalling the events 28 months previous.