We had a great morning at event number 68 with lots of 'extra' special people running with us this week (I say 'extra' because you are all special to us!)

However, even those of us who have more than a few miles in our running shoes will remember the nerves involved with that first ever 5k, that first parkrun or first race... And so we all understood how the Tri-energy Run Fitter graduates were feeling after they completed their beginners course and turned up this Saturday to complete their first official timed 5k.

And they all did brilliantly. Congratulations to you all, if you can complete Wyre Forest parkrun then you really can conquer anything! 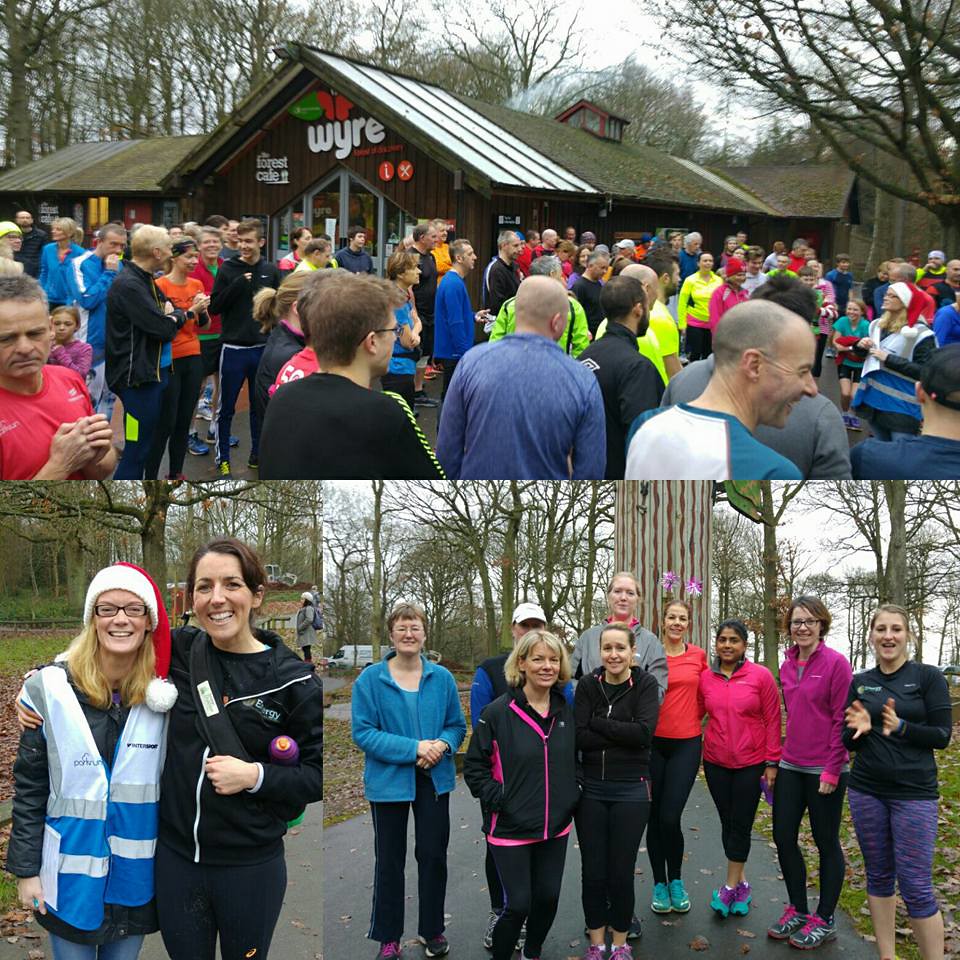 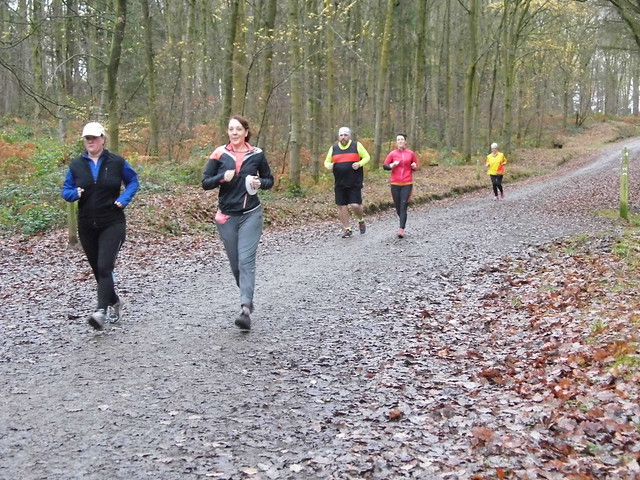 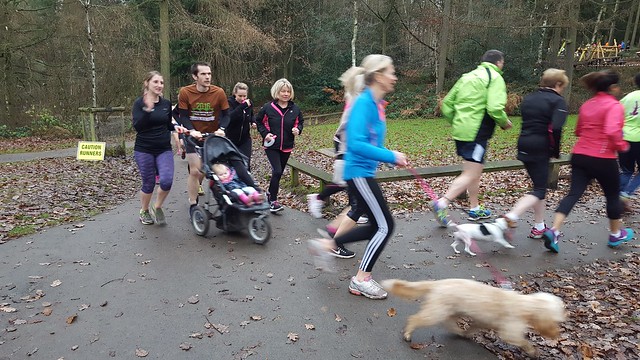 And of course we must say a HUGE thanks to our fantastic volunteers with who we wouldn't even have a parkrun: 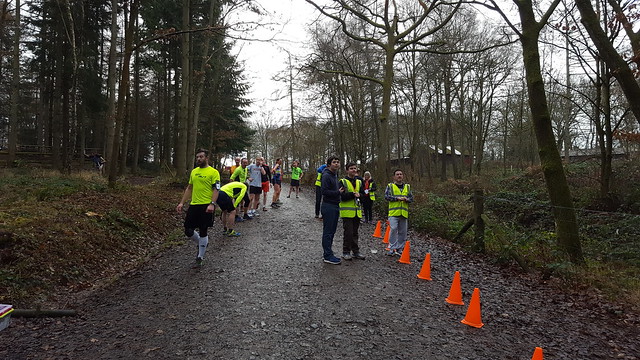 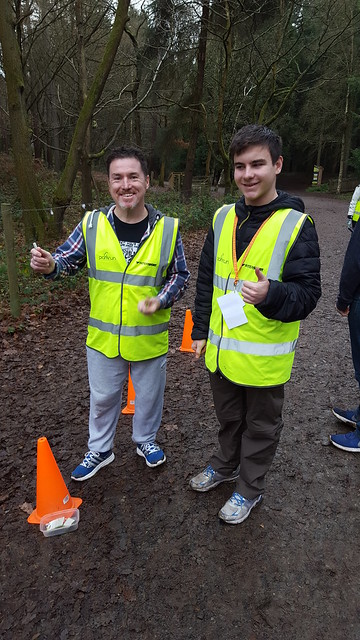 Photo: Gav and Sam were in charge of the Finish Tokens this week 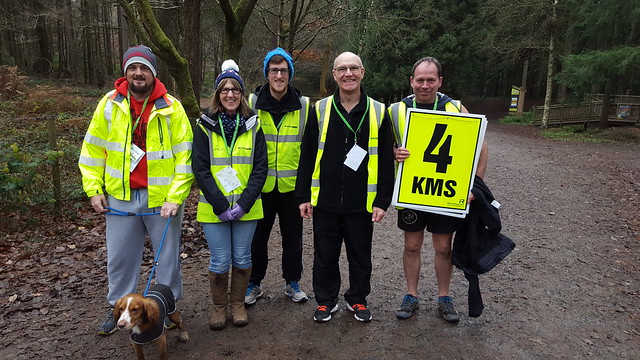 Photo: Some of this weeks fantastic marshals - Pete, Wendy, Stuart, Paul and Bill

Please contact us at wyreforesthelpers@parkrun.com to enquire about volunteering - we'd love to have you help us out.

Jocelyne ADAMS chose Wyre Forest parkrun as the location to complete her milestone 50th parkrun and brought with her 15 members of Bridgnorth Running Club. They celebrated in the Forest Café afterwards. Well done Jocelyne, here's to the next 50! 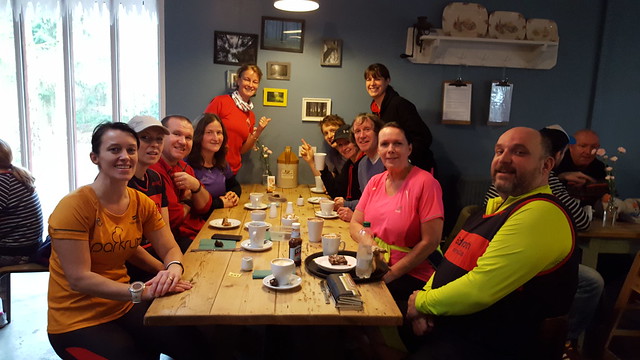 Photo: Jocelyne (stood up, back left) and her pals from Bridgnorth Running Club

Now I think it's fair to say that we have amazing people at Wyre Forest parkrun every week. But I think this is the first time we've had a TeamGB Gold medallist run here! Local swimmer Claire CASHMORE picked up gold and silver medals in the Rio Paralympics 2016 to add to her medals from London, Beijing and Athens. And swimming is not her only talent if her finishing time on Saturday is anything to go by, Claire completed her first ever parkrun finishing as second female and looking incredibly strong crossing the finish line! 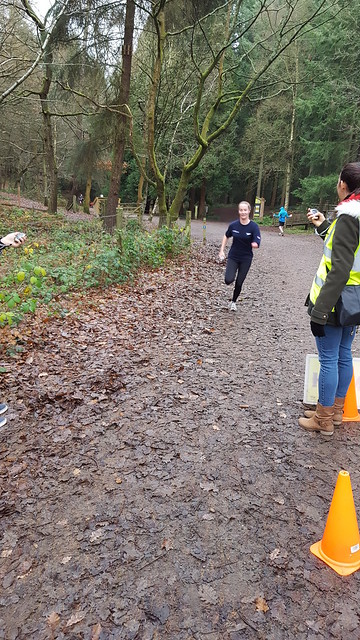 Well done to Claire and all our first time parkrunners:

We hope to see you back again soon beating those PBs!

Just before I go, please can you all check your bags if you brought one with you on Saturday as one of our regular runners has lost a top (of great importance to him) and we want to try to get it back. We think it may have gone in someone's bag that was left at the finish line - so please, please check and get in touch if you have it.

On a similar theme, we have had some finish tokens go missing, if you have one - don't be embarrassed just drop it back to us! We have to replace them and the new ones don't scan very well so we'd like any originals back please. 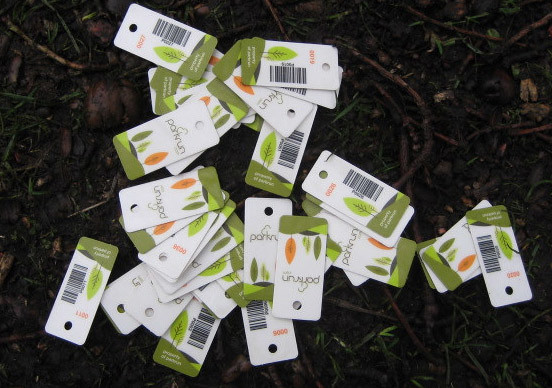 Thanks everyone, don't forget we are here every Saturday as usual over the festive season including Christmas Eve and NYE. Please bring your tinsel and sparkle on Christmas Eve, I have heard a rumour there could be some impressive fancy dress outfits on show so feel free to join in!

See you next week, Andie

This week there were 143 runners, of whom 24 were first timers and 27 recorded new Personal Bests. Representatives of 21 different athletics clubs took part.

Wyre Forest parkrun started on 29th August 2015, and since then 2,319 different runners, including participants from 202 athletics clubs, have completed 9,557 runs covering a total distance of 47,785 km, and there have been 2,327 new Personal Bests.

Compliments to everyone who faced the poor weather conditions this week. It was definitely a wet one and I think the forecast for strong winds (which must have missed us in the end) kept some of you at home as turn-out was much lower than usual. I'm sure you're all just saving yourselves for our upcoming birthday bash. Am I right?!

And of course an extra thumbs-up for our hardworking volunteer team. This week we thank:

We are now filling the roster for September so please get in touch at wyreforesthelpers@parkrun.com to do your bit and keep our parkrun going. 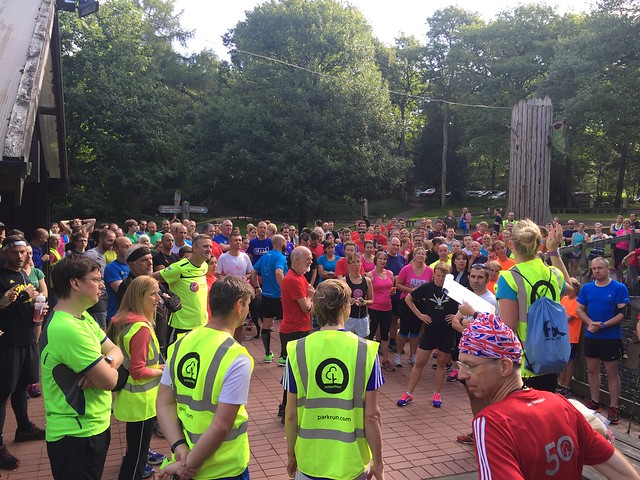 So this Saturday marks our first birthday! It is hard to believe that this time last year we were gearing up for our inaugural. In our wildest dreams I don't think any of imagined what an amazing event it would turn out to be. We've averaged around 140 runners per week and had nearly 2000 different runners complete our course. Coincidentally, we have had 52 different first finishers (one for every week so far!) 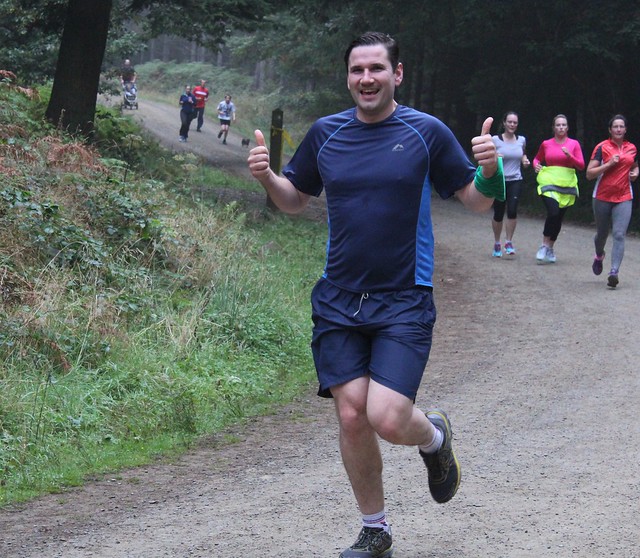 Also this Saturday we will be taking part in I Am Team GB. Following the huge success of our athletes in Rio, ITV will be turning off their channels for an hour between 9.30-10.30am in an attempt to get more people playing sport. So if you would like to bring a friend with you who has not been before then please do and let's get them involved! They will be made very welcome. 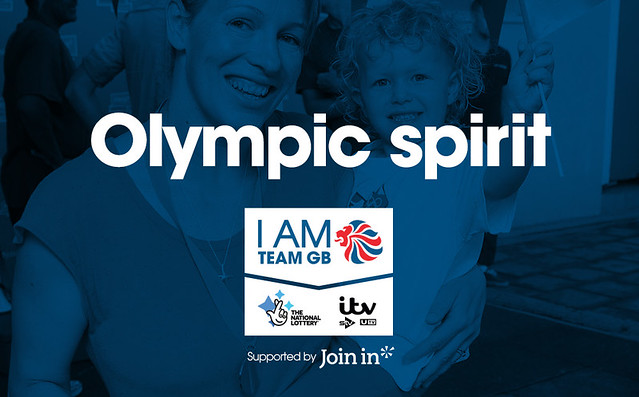 We will be celebrating our birthday with some small awards for the points competition winners as well as some random prizes that everyone has a chance to win. We will announce our 'Volunteer of the Year' too. And obviously no birthday party is complete without cake so rest assured - there will be plenty of that! Many of us are wearing fancy dress and anything goes but if you're struggling for ideas how about going with the I Am Team GB theme and wearing red, white or blue? 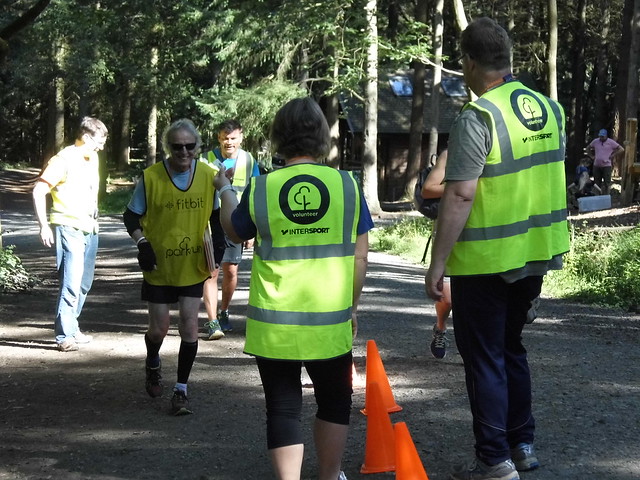 After the success of our first year I want to personally say thank you to the core team for their endless support, enthusiasm and commitment over this first 12 months. A year ago, some of us had never volunteered at a parkrun before, some had not even been to one! In many ways though we came with no preconceptions or pressure but have just let it evolve and have learnt as we've gone along.

We've all (well most of us - including me!) messed up the timing, we've had someone drop all the tokens and even had a Run Director who scanned his own barcode (as a demonstration to volunteers but then forgot to delete it) and ended up in a record breaking first place with a huge PB......oops...I could go on! But generally speaking I think we've picked it all up quite well and kept everyone happy and safe!! 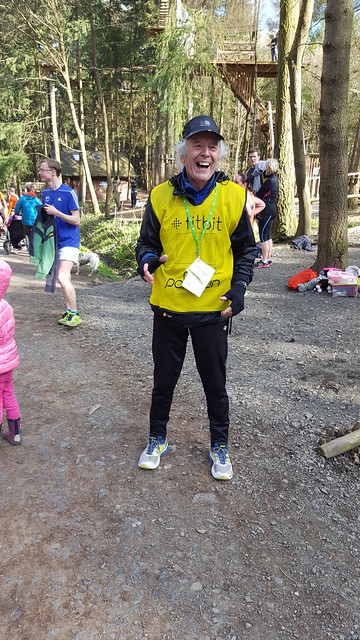 Photo: Lindsay Pulley celebrated his 100th parkrun with us and regularly volunteers too

Thanks in particular to Jo and Vicky for taking some of the behind the scenes stuff for me when I've been away and to Ade and Chris for doing the thankless task of setting up the course in all weathers - I guess its really down to those two that we've not lost anyone in the forest! 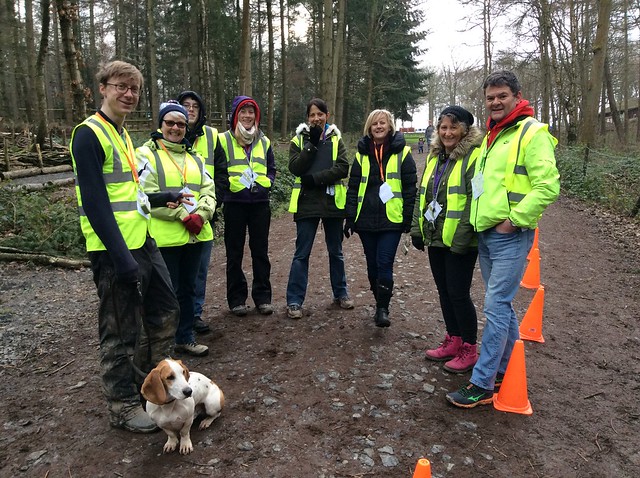 Photo: Some of the core team back in the winter 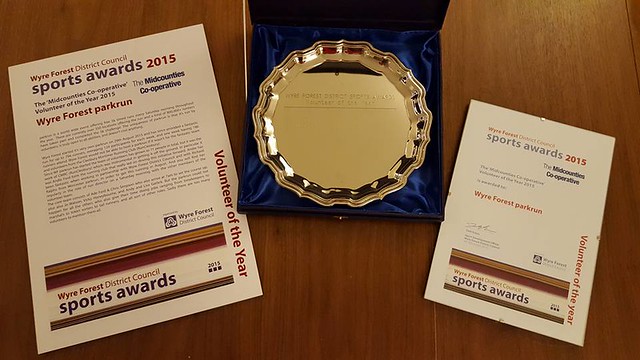 Photo: The core team were honoured to receive the 'Volunteer of the Year Award at the Wyre Forest Sports Awards 2015

The highlights of our first year have been many. The Halloween run was our first go at a themed run and didn't disappoint at all. Colin, Lindsay and Phil all celebrated milestones which were a joy to witness too. Mark's 'hat' run also looked fab though I missed it in person. I always love seeing the Forest Monsters in all their orange having such a brilliant time here and I've seen people with plaster casts, slings, knee braces and walking sticks complete our tough course!

The runners with double buggies coming up the hill fill me with awe as do those completing their first parkruns or first ever 5k. And the runners who come back week after week, particularly those in the middle or back of the pack fill me with pride. And the juniors (some of whom are so quick it makes me dizzy) are a real credit to themselves and their families. And of course I can't forget the dog that refused to run and was carried back to the start line!! 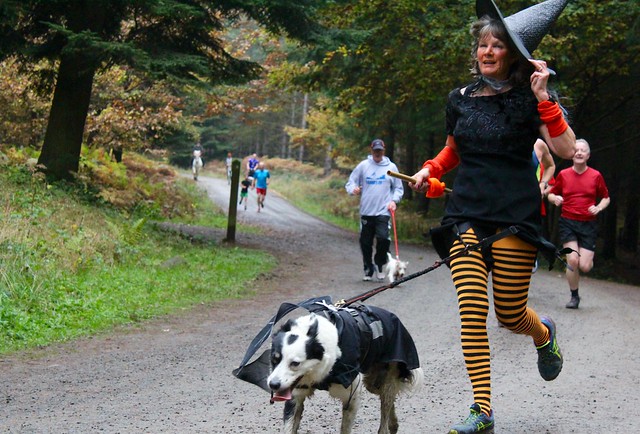 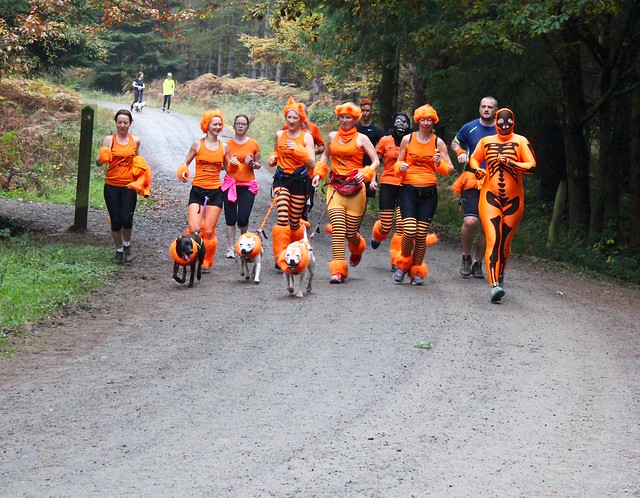 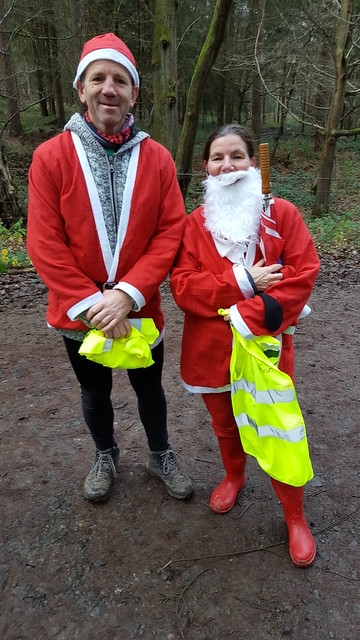 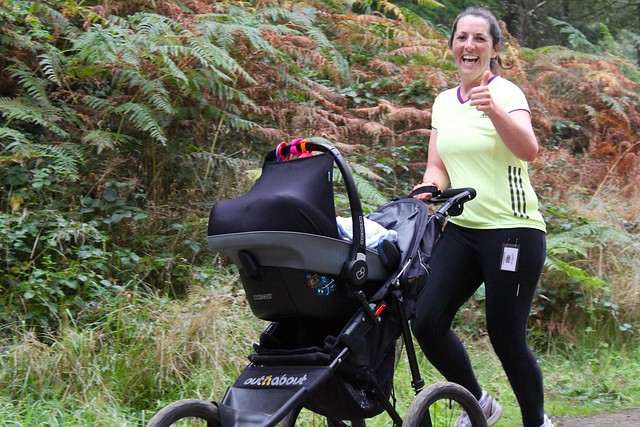 But if I had to choose the one thing of which I am most proud of it is the way in which it has brought people together doing something fun, free and accessible. The very ethos of parkrun of course. I know I've made many new friends thanks to parkrun and met some incredible people and I hope the same goes for everyone else. 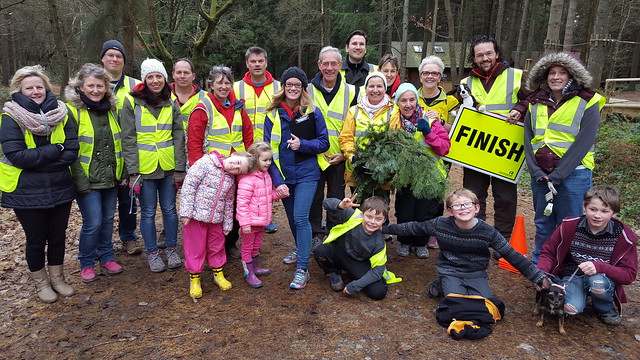 One of my favourite volunteer group shots!

So huge thanks to every single one of you for making our first year such a memorable one, lets hope there are many more to come! 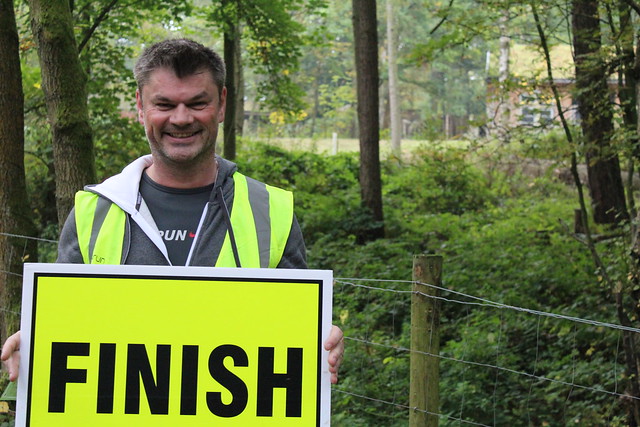 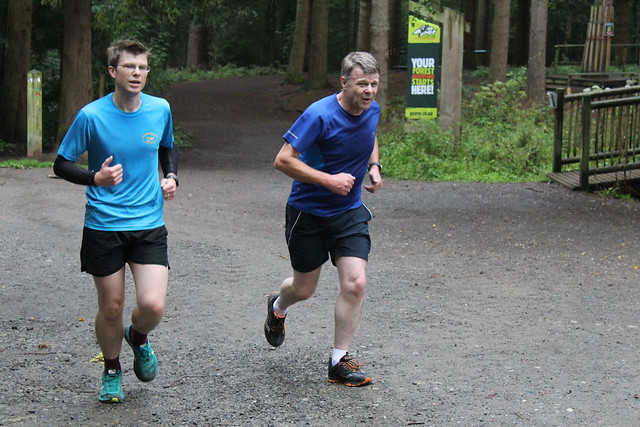 This week there were 97 runners, of whom 11 were first timers and 13 recorded new Personal Bests. Representatives of 17 different athletics clubs took part.

Wyre Forest parkrun started on 29th August 2015, and since then 1,954 different runners, including participants from 175 athletics clubs, have completed 7,279 runs covering a total distance of 36,395 km, and there have been 1,790 new Personal Bests.