This week's Run Report has been written by Helen HIPKISS aka 'Hot Lips' of the Wyre Forest Hash House Harriers! Read and enjoy what is possibly the most bonkers Run Report ever!

"A lovely chilly but sunny morning for the WFH3 takeover. Probably a few St Patrick's Day hangovers but we were all up bright and early none the less. An abundance of bright & crazy leggings (even some gold ones!), tutus, hash t-shirts & hats and even a new WFH3 flag to mark the occasion! Brilliantly inspired - well done Plays With IT! 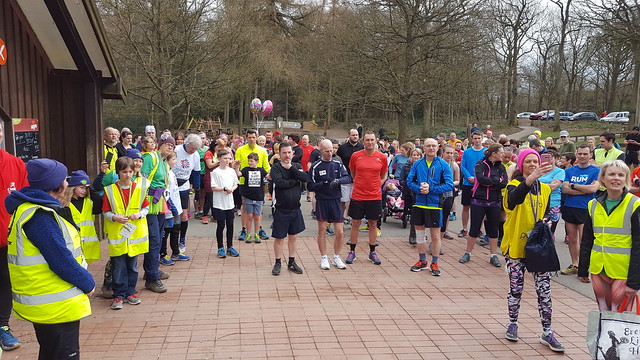 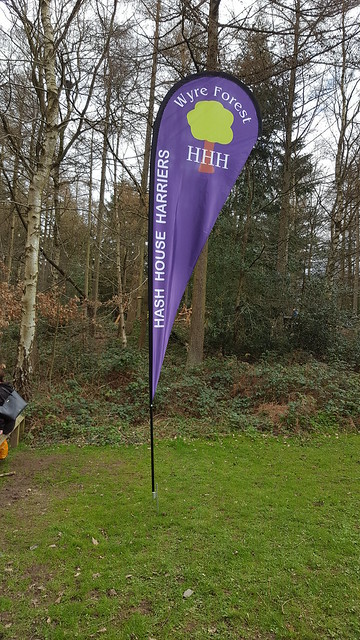 Cross Dresser, today's run director, sounded the megaphone, read out all the announcements and gave today's instructions. He also plugged WFH3 to try & drum up some freshers into our fold - one man's ears pricked up when he heard we were a drinking club with a running problem... 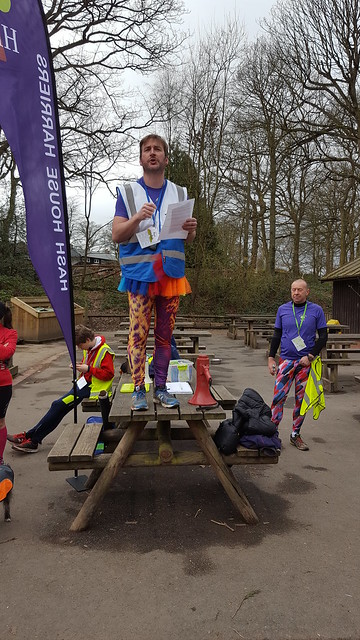 Clodhopper shouted the starting countdown and they were off, off up that hill. No flour or sawdust to follow but plenty of arrows and marshals instead. Many hashers were already in their marshalling positions but there were some photo opportunities for those of us with positions near or at the finish line. 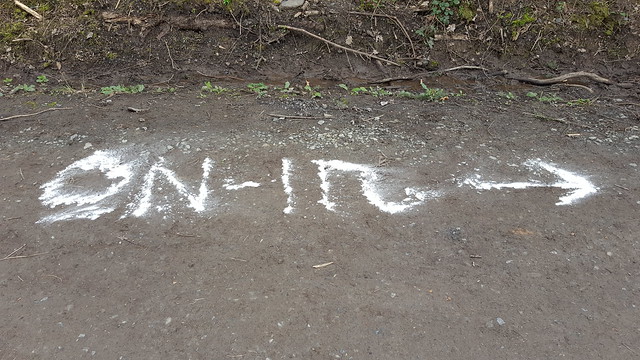 Photo: They couldn't resist using a bit of flour...

Wrong found a bench to sit on whilst Plays With IT erected another flag. I took my hashlings up the hill to wait in prime position at the 'final corner' of the track. How we love cheering and clapping the runners, telling them "almost there!" "Not far to go now!" and "a bit of downhill next!"

Now, the only rule of hashing is that there are no rules and this became very apparent when Compost was about to cause chaos by trying to direct the front running male straight up the path at M9. We also tried to coerce a non parkrunner to go & cross the finish line at about 10 past 9 - she would have really broken a record! Hehehehe.

And so, 171 runners ran past. We probably brought 170 hashing volunteers! The front runners (or FRBs as they're affectionately termed on a Thursday night), the dog runners, the cyclist (!), the birthday party, Rupert the Bear (it almost could be a Thursday night!), the runners, joggers and walkers, parkrunners young and old (just like hashing too) We like to think we were the best marshals. (I'm certain the rest of the marshals did a fantastic job too!)

Tail runner, Jacqui, was appropriately dressed for the occasion. She had a group of minders in her midst too but commented on what a privilege and pleasure it was to run with Max and Lindsay. 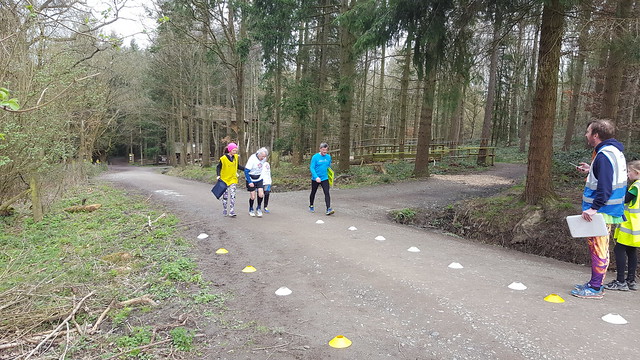 An overwhelming WFH3 welcome committee back at the finish line with loud cheers and whooping and our trademark sweets handed out to everyone by DF - a nice little touch. Everyone was expertly managed in the funnel by Pond Life, timed by Darth Radar & Clodhopper, given tokens by Hash Quack and Game Bird, scanned by Cyclopath & Dr Whiplash before heading off to the On Inn for cake & coffee. Perfect start to the weekend 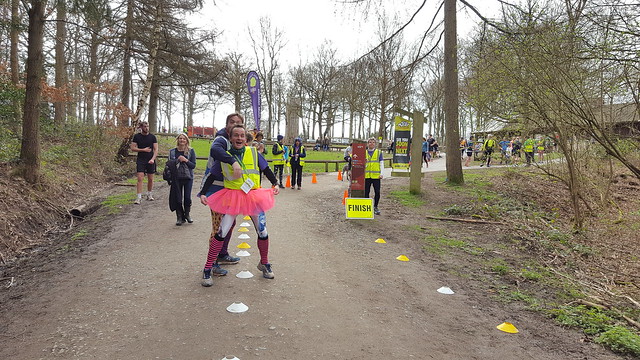 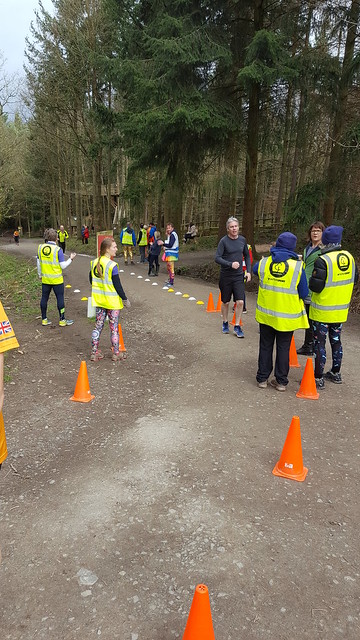 On on parkrun The best ParkRun takeover ever? Where's the hashometer when you need it...? 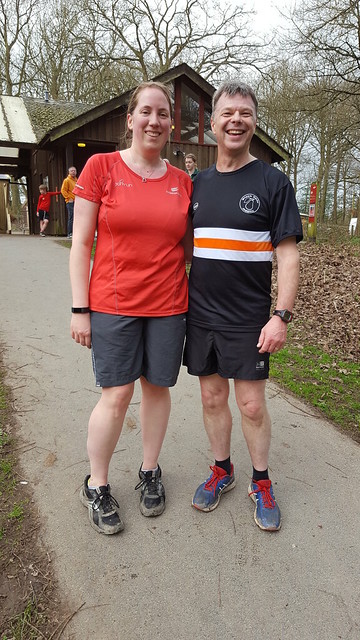 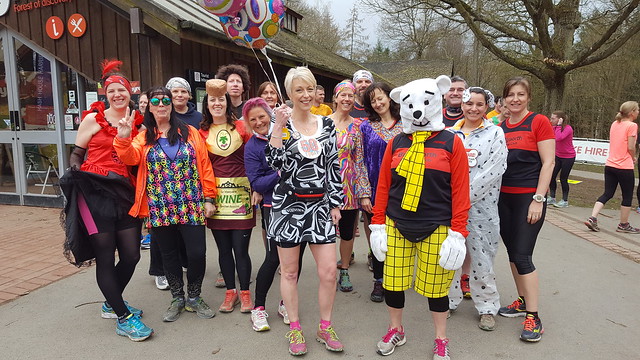 ....and Ernest from Australia (although we have only just discovered this!)

This week 171 people ran, jogged and walked the course, of whom 30 were first timers and 36 recorded new Personal Bests. Representatives of 19 different clubs took part.

Well done to all our first timers: 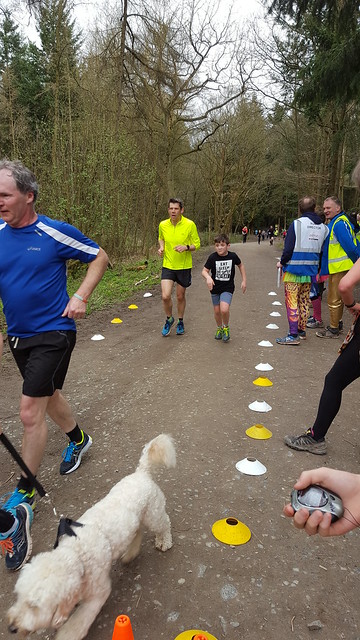 The event was made possible by 30 volunteers. 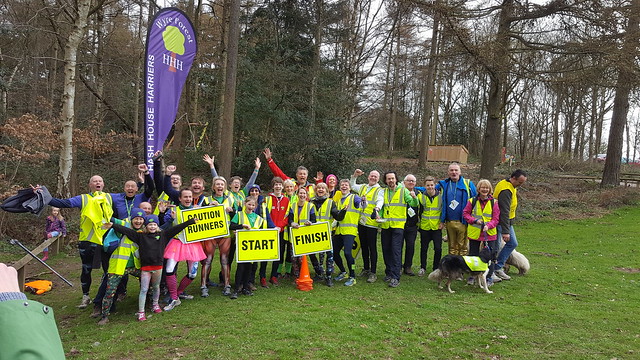 Today's full results and a complete event history can be found on the Wyre Forest parkrun Results Page".

This week's run report is brought to us by Helen HIPKISS and its a good one - read and enjoy!

Ahoy me hearrrties and shiver me timberrrs, it's only Captain Graeme's 50th parkrun! 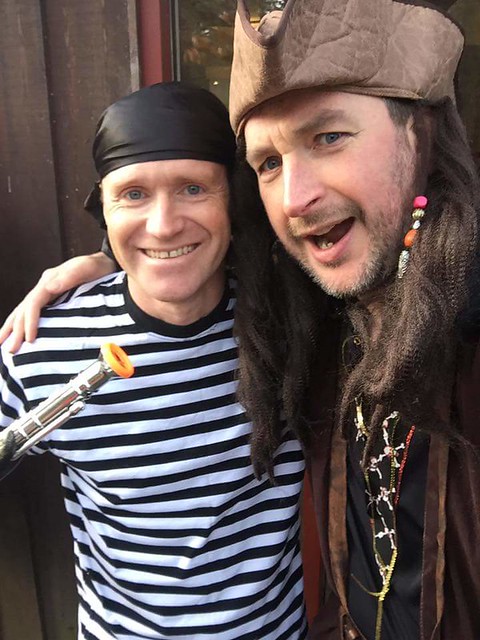 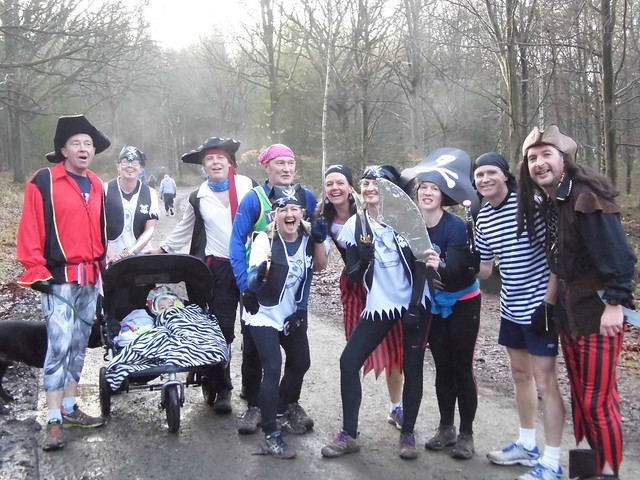 Gatherrr round and listen up as we preparrre to set sail on this momentous jourrrney - the half century for this Jolly Rogerrr. Lots of ye all here, firrrst timers and old sea dogs, buccaneerrrs and landlubberrrs, all out on this misty February morrrning. All hands on deck, it's 9am, cutlasses at the ready, batten down the hatches, give a big heave ho and away we go! 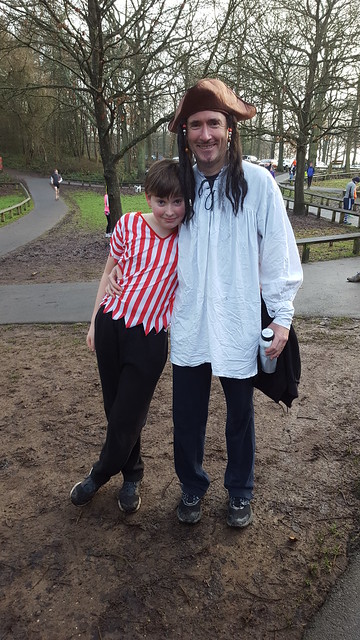 Lots of "aarrrs" on the way round (and some whooping from the wenches), loads of fun and laughterrr. Great to see some young pirates amongst the marrrshals cheering us all on and bringing up the rearrr. In true pirate style, we captured them all - all in the form of marrrshal selfies - aarrr! 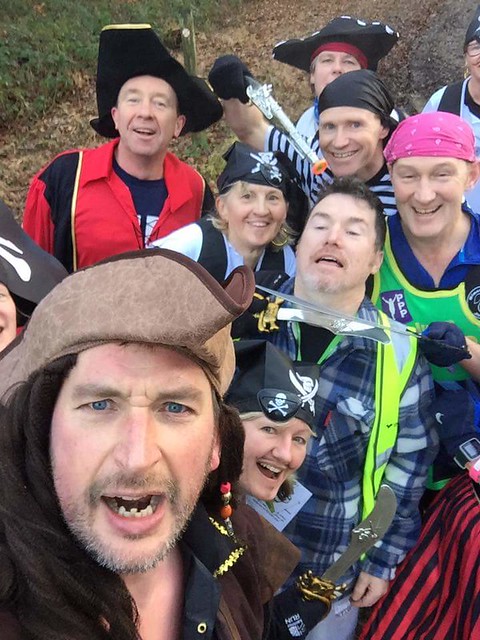 Photo: Marshal Gavin wonders what he signed up for today! 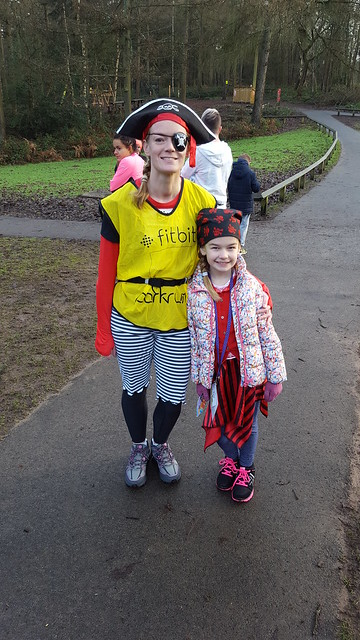 Photo: Tailrunners Andie and India-Rose (who completed her first ever parkrun!) 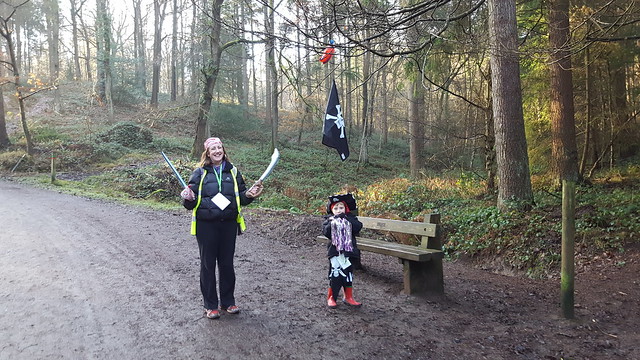 Photo: Emma and Ryan (joined by a parrot!) giving their usual fab support at the bottom on 'the hill'

Our booty was in the pram and, despite many pirates giving a helping hand, even we had to bewarrre the scallywag amongst us - he'll be walking the plank laterrr. 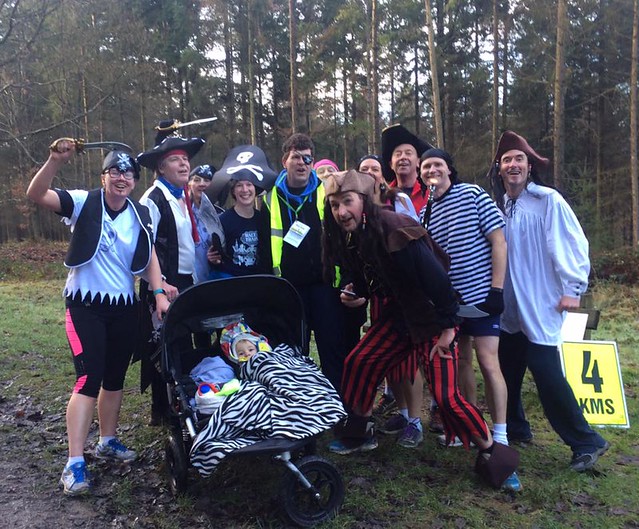 The weather stayed dry and the mist clearrred to reveal sunshine and blue skies - perrrfect pirating weather. Everyone was in verrry good spirits and even the last uphill stint didn't seem too bad - all those yo-ho-ho's and aarrrs really helped! 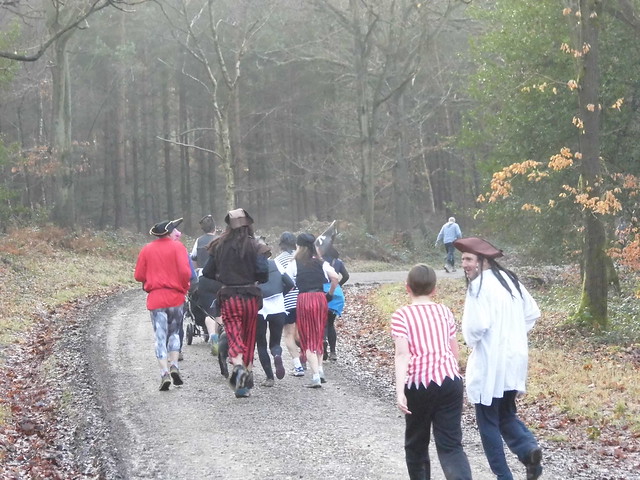 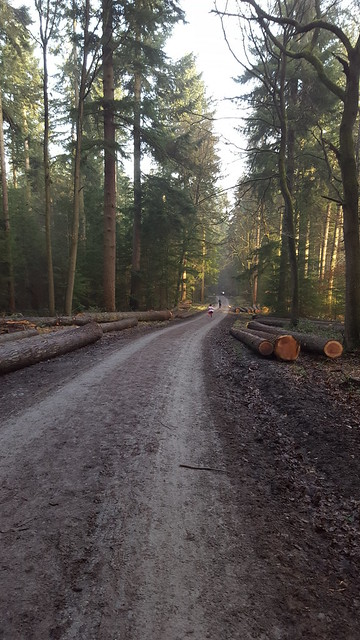 Land Ahoy mateys! We've got the old sea dog round. There be treasurrre in the visitorrr centre - X marrrks the spot, lets go get the grog...

And thanks to the rest of our volunteers this week: 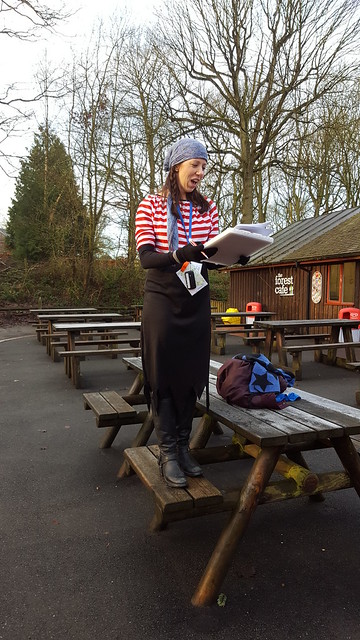 We also had another young pirate reach a milestone. Junior Harry BRIGHTON completed his 10th parkrun and can now claim his free t-shirt. Well done Harry!

Well done to Elaine SHERWIN who added Wyre Forest to her list of parkrun first finishes. Elaine is a Canicross European Champion and we were honoured to have her and her pointer Daphne run here on Saturday. The female CR was surpassed but noted as an 'assisted' run in this case. In fact there were some fabulous 'assisted' PBs this week so well done also to Alan SHERWIN and Tina SMITH and their 4 legged running buddies. 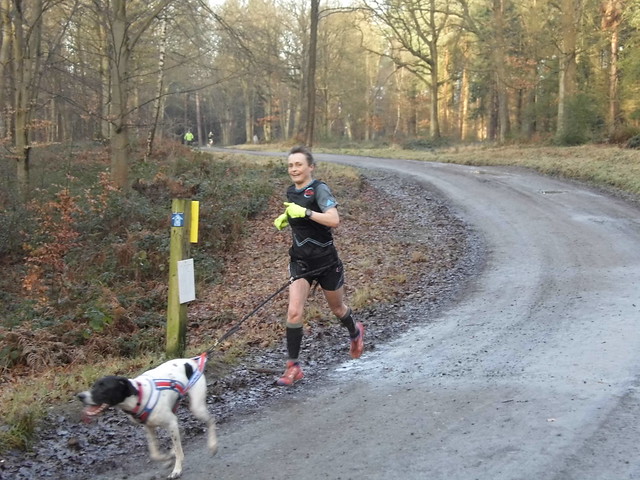 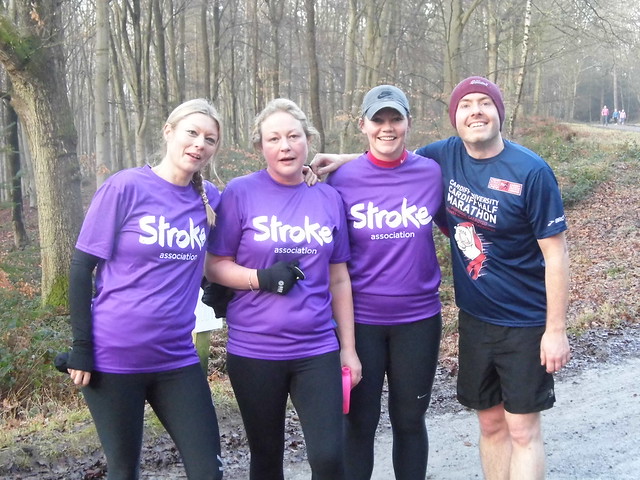 Next week we have another club takeover as local group tri-energy will be providing the volunteers for your run and showcasing their club to us.

And we will be congratulating two lovely ladies on their 50th parkruns too.

See you all there!!

This week there were 199 runners, of whom 37 were first timers and 29 recorded new Personal Bests. Representatives of 22 different athletics clubs took part.

Wyre Forest parkrun started on 29th August 2015, and since then 2,574 different runners, including participants from 212 athletics clubs, have completed 11,075 runs covering a total distance of 55,375 km, and there have been 2,576 new Personal Bests.

Thank you to our 113 runners and 18 volunteers for your support this week. As we get nearer to Christmas the numbers might drop (post party hangover anyone?) but the effort certainly does not as 26 runners left with new PBs this week! Congratulations all of you. 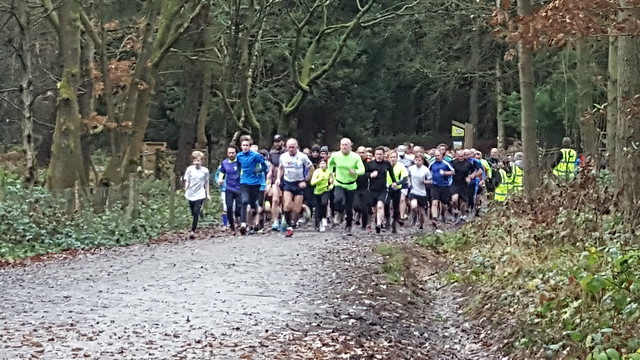 A huge thanks of course to our organisers and volunteers this week:

Particular thanks must go to one of this week's timekeepers, Nigel Gardener who celebrated his wedding anniversary by bringing his wife along! We hope you both enjoyed the start to your special day. Who says romance is dead eh??! Not at Wyre Forest parkrun it isn't!

We had just two first timers this week - Hylton Smith and Nathan Smith from local Cleobury Mortimer Running Club. The brothers both finished their beginners running course just last week so must be massively proud of running the whole 5k in 28:57!! well done to you both. 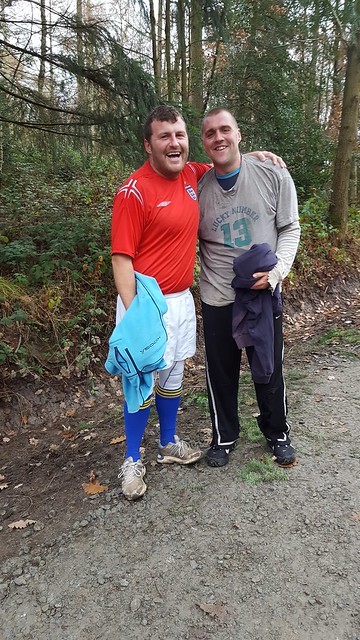 Our visitors this week came from Leamington, Bristol and Gloucestershire among other places. We were thrilled to welcome you all and hope you enjoyed your run here. 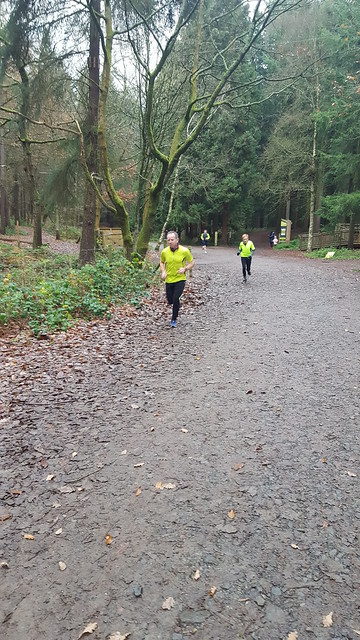 We are here as usual on Christmas Eve and New Years Eve so bring your party spirit with you. We are looking forward to seeing the Wyre Forest HHH in fancy dress again, feel free to join in everyone! 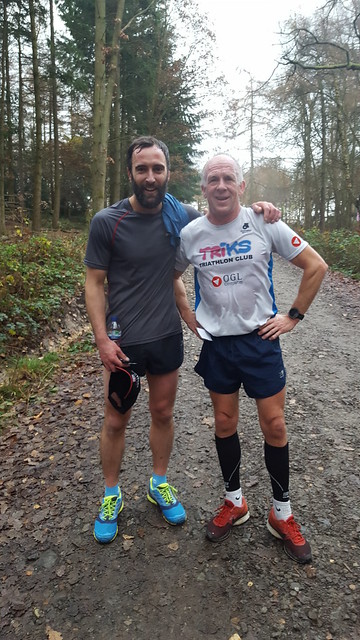 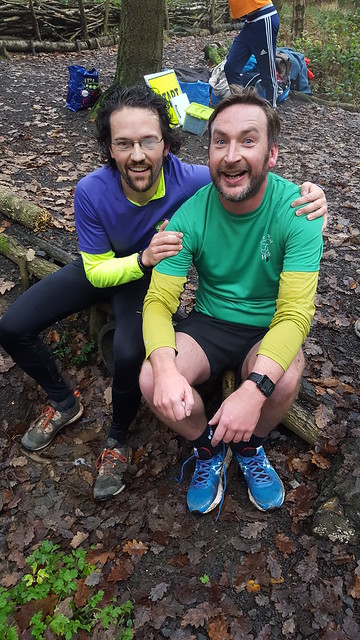 This week there were 118 runners, of whom 11 were first timers and 26 recorded new Personal Bests. Representatives of 17 different athletics clubs took part.

Wyre Forest parkrun started on 29th August 2015, and since then 2,295 different runners, including participants from 199 athletics clubs, have completed 9,414 runs covering a total distance of 47,070 km, and there have been 2,300 new Personal Bests.