What a way to start the New Year. 335 fantastic parkrunners, 25 fabulous volunteers and 1 stunning cake.

Sorry folks but headlines have to go to Cary O'Donnell's 100th Wythenshawe parkrun celebration cake. Anyone who hopes to win the 2017 cake of the year award is going to have to produce something amazing to knock Cary off the top spot. Yes I know it is only the first week but if you saw the cake and the detail that was put into the decoration of it I think you'd agree. For those of you who missed it here it is. 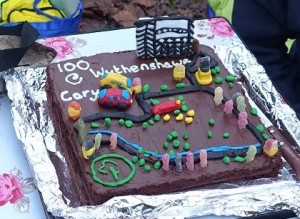 All the detail is there - the old hall, car park, far bridge, muddy passage, farm animals, trees, Cromwell, marshals in hi-vis vests, parkrunners and of course, the parkrun logo. The cake went down well with everyone who sampled it and even Cromwell enjoyed the occasion - he was last seen in the café but unfortunately didn't survive the experience. No-one has admitted to his disappearance!!

A huge thank you to Cary for this masterpiece in baking or perhaps it is Miss O'Donnell who deserves the credit. Thank you anyway to the creator.

Now to the running.

As mentioned above we had 335 runners on a slightly foggy but otherwise ideal morning for parkrunning. Of these 69 were running at Wythenshawe for the first time with 45 yes 45 taking part in their first ever parkruns. We had tourists from places as far afield as South Manchester, Reading, Norwich and Birmingham. We hope you all enjoyed the experience and will return again and again and again and ……

There were 35 personal bests. Too many to name individually but I will mention 3. Edward Lord who achieved his first PB since 21st of May last year, Andrew Grant who on his 11th parkrun managed a time under 30 minutes for the first time and Carole Partington for achieving a quirky PB time of 33.33. Well done to everyone who achieved a PB and to those of you who didn't - keep on trying you'll get there one day.

There were 3 parkrun milestones - Scott Wilson doing his 50th parkrun and Kieron Walsh and Colm Mulhern both doing their 100th parkruns. Congratulations to you all.

Bravest parkrunner of the week is Cale McCoy who completed his first ever parkrun on Saturday. After tripping and badly grazing his face last week during his first attempt he bravely turned up again on Saturday for another go. This time he managed to stay injury free and complete the course. Well done Cale.

With apologies to anyone I haven't mentioned or any major omissions I think that's everything.

See you all again this coming Saturday and DFYB.