Since we have a leap year, it’s possible to do 5 parkrun’s in February 2020. Therefore it seemed only right to do an epic parkrun journey.  So....as English fans headed north and flocked across the border to Edinburgh for the six nations rugby tournament, a group of hardy runners left their stable in Dunfermline Fife, at the ungodly hour of 4.00am to travel in the opposite direction. It’s now possible  to catch a Trans Pennine Express train from  Edinburgh Waverley station at 5.14am to arrive in York at 8.02. All in the name of parkrun and to add a Y to their alphabet challenge. 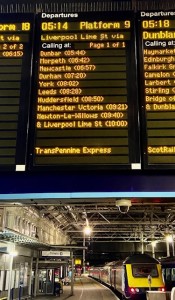 Nicola, Laurie and Varrie were joined by Hazel and an anticipated short trot to York racecourse turned into a taxi journey as the train arrived late, however they arrived just in time to warm up.

WOW, the sight of a magnificent racecourse and a welcoming crowd did nothing to settle their pre parkrun nerves. The sun crept out, the sky was blue, the wind subsided, the odds looked good - a perfect morning for their own grand national day.

RD Ellie gave the welcome briefing and the going was good, there were no handicaps,  614 athletes, buggies and four legged friends lined up at the start, they were counted down, 3, 2, 1 and then off along the flat furlongs.

The Fife fillies enjoyed their flat 1.66 gallop round the Knavesmire - compared to the steeplechase of their local course Dunfermline, the fillies were on top form!!  Their coaches, Christine and Dyanne at Jogscotland would be proud.

There were no rucks, scrums or mauls as they were cheered and encouraged all the way by a group of enthusiastic supporters and friendly volunteers. 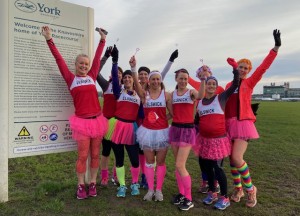 Rob Byers and Chris Poulton dominated early on as the front runners, the pace and conditions were good, there was even a sprint finish. The fillies were joined by the glamorously dressed Elswick runners who travelled from Newcastle for a hen weekend, where the bride-to-be was also celebrating her 50th parkrun. Dave and Catherine who are new to parkrun ran the course for the first time without walking by following a pacer which is great news.

At the finish funnel the Fife maidens were panting and sweaty but they had all remembered their bar code, tokens scanned, and cosy blankets on, they trotted off to the Knavesmire paddock for a full fry up - what no haggis or tattie scones??? A great wee pub at the heart of the community, served with a friendly smile by Rachel. Much banter was had, results were processed and Red Rum, Seabiscuit, and even Black Beauty were spotted downing a rewarding post run beverage ... or was that just sleep deprivation kicking in? 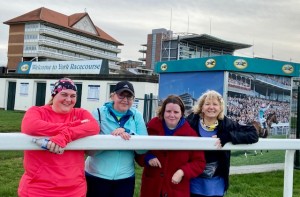 Thank you team York. What a great start to the rest of the day.

Then with a few hours to enjoy the peels of York Minster, some retail therapy in The Shambles then coffee and biscuits at The Grand Old Duke - elated but tired,  they boarded the train north just in time to hear the skirl of the bagpipes as another great sporting event kicked off - The Calcutta Cup, Scotland v England at Murrayfield.  You are either a winner or loser at rugby, but with parkrun everyone is a winner, and no one gets the wooden spoon! 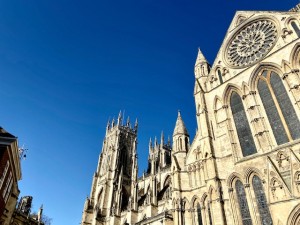 Today's full results and a complete event history can be found on the York parkrun Results Page.

York parkrun is entirely run by volunteers and a great core team. Please consider volunteering to help occasionally - the event survives only because of volunteers. Please visit the volunteer page for more information.

This week could only go ahead because of volunteers:

If you would like to help at future parkrun’s please email york@parkrun.com

Thanks for reading and see you all next week.